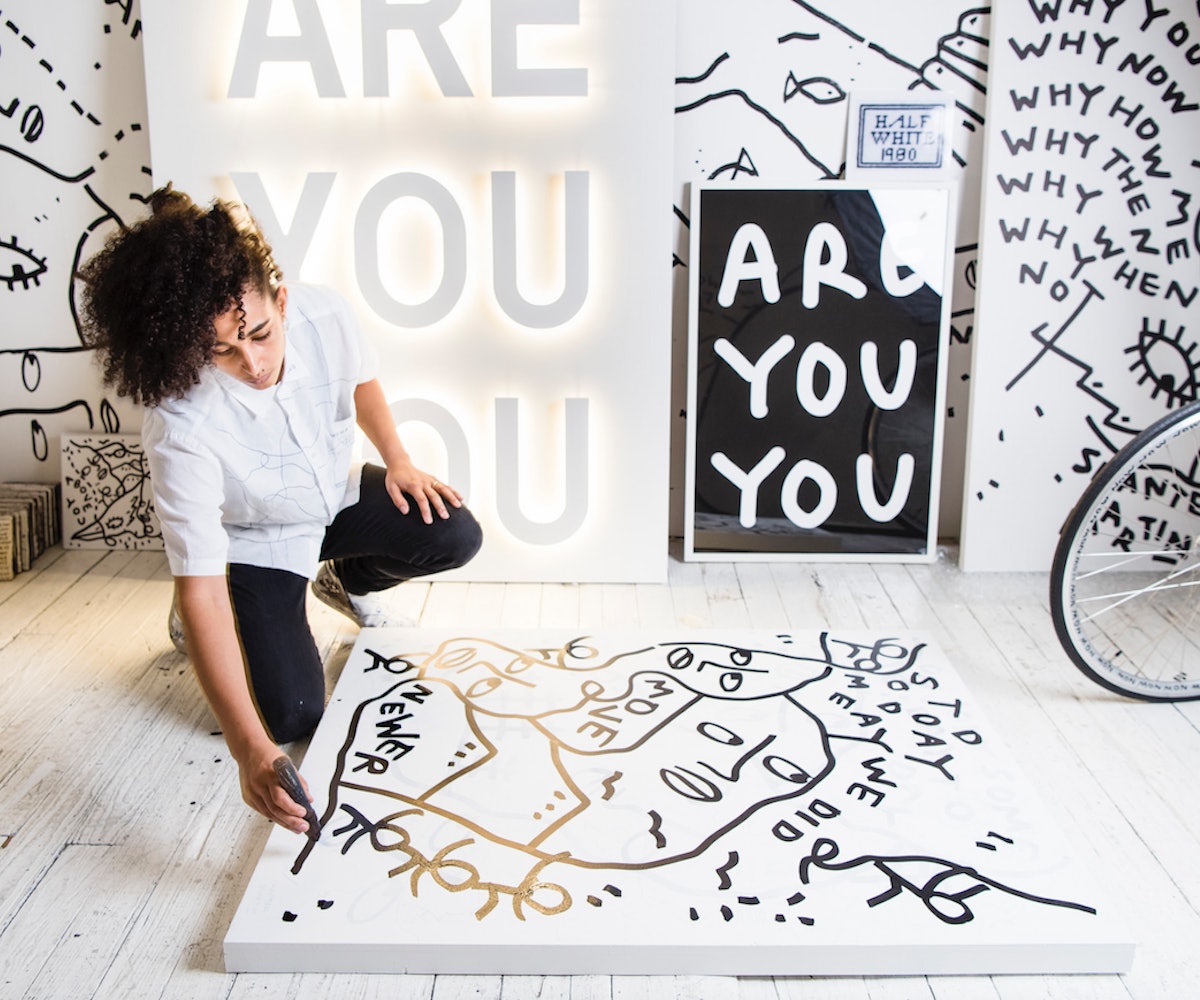 It's hard to pinpoint exactly what makes Shantell Martin's work so full of joy. Perhaps it's the obvious element of spontaneity and whimsy contained within, or perhaps it's that Martin's art is never confined to a predictable space or framework. Rather, Martin's work is inherently exuberant; her art seems to burst forth at the viewer with an unrestrained quality and a sense of beauty and fun that is positively infectious. This doesn't, of course, mean that Martin's work isn't studied or deliberate. In fact, there's a clear, fierce intelligence and intention behind everything Martin does, from her work at MIT's Media Lab to her recent collaboration with Kendrick Lamar at Art Basel. Martin's art explores issues of identity and belonging and serves as a commentary on the way we inhabit the world. Below, we talked with Martin about what first drew her to the arts, what artists have to offer the public in these politically tumultuous times, and, of course, what it was like to work with Lamar.

What first got you interested in being an artist?

It's funny, growing up, I never really knew that art was a career. I didn't grow up around art or galleries or museums or artists. So, it was much later in life that I realized that that was potentially something I could do. Becoming an artist, for me, has been a mixture of the accidental, in the sense of it was never planned, but also from living this life in a way where I'm saying yes to things that feel like a yes, and no to things that feel like a no. Then you wake up one day, and you're like, "Oh, wow, I'm an artist." So, I feel like it was a half-focused, half-accidental career that I'm in.

You've built quite a career from half an accident, but it makes sense that those are its origins, because your art has a real sense of spontaneity and it feels so alive and energetic. I think this is, in part, because you don't restrict yourself to typical canvases. What is it about breaking the old rules of where art should be or should not be that really appeals to you?

It wasn't artists who made those rules in the first place, you know? People have made those rules, they've made those boxes, and they have been mostly for business so that people can sell art and create an industry around art and create this kind of mystique around art and also make people spend a lot of money on art. I feel like there's been a lot of rules and boxes put in place. Where I'm coming from, it's just about keeping it simple. Like, "Let's imagine that art can be for everyone," and, "Let's imagine that art is welcoming and it's not intimidating and anyone on the street can say they like art without feeling that they're intimidated or they don't understand it." So, where I'm coming from is this: working with tools and mediums that are very simple and very accessible. I'm working with pens, I'm working with markers, I'm working pretty much on surfaces that I can get my hands on, be it my clothes, my bedroom walls, a shirt, a car. You know, for me, it's a lot about just kind of reimaging art as this very accessible thing where people look at it and they might say, "I could do that." The more people that think, "I can do that," and they go and actually do something creative, the more you can benefit out there. So, by working with all these different mediums and by working in a way that's very accessible and very visual, I'm trying to bring something back to how it used to be. It's art that can be enjoyed by everyone. We can still make people feel really good about spending lots of money on art, but let's not try and overcomplicate it and make it something it's not.

You have a variety of really fascinating projects that you've done in your career, and, most recently, you worked on a piece with Kendrick Lamar at Art Basel in Miami. How did that come into being and what was that experience like?

That was really fun. I've been to Basel three times in the last two years, and it's always an interesting experience there [at the art fairs]. They're not really for the artist, it's for the gallery; because I work for a gallery, I can't do anything but art there, so unless I'm doing some kind of special project, I always go and I like to do something alternative, something very different. So, for me to sign up to a project, it has to be something I believe in. It has to be a good fit. It has to be something that's intriguing and interesting to me. So, it ticked all of those boxes for me, and it was one of those projects where Kendrick was awesome, his whole crew was awesome, all the team were really nice and really talented and really professional, and then we produced a really amazing show which I think people really enjoyed, and it had a huge impact down there.

Does music play a role in your work?

Yes, yes, and yes. I lived in Tokyo for five years from 2003 to 2009, and my job was I was a visual jockey. I would do live analog or digital visuals to DJs, to dancers, to musicians. So all the work that I would create were artistic reactions in real time to these musicians or to these DJs, and, you know, that played a huge role in my output. Even now, even if there's no music playing, there's still music playing in my head. I'm drawing to some kind of rhythm. I'm drawing to some kind of beat, be it in the room physically or kind of in my head. I've also started to make my own music now; I don't have any playing experience, but I've discovered it's the same as drawing. When you're drawing, it's body, so you're pulling yourself physically into this place where you're playing this instrument, and it's the same as moving a pen around. You attack it or approach it in the same way. Music has always played a really important part in my work and only very recently has the music started to become my work as well.

I look forward to hearing some of what you're doing in the future too.

I'm excited. I'm also shy and kind of excited to play it live and put it out there.

Right now, we live in pretty politically tumultuous times, what role do you think art plays in our larger political conversation?

I think different artists play different roles in these kind of times, as politics is kind of playing more of a role within a society or within a culture. For me, politics are in my work in the sense that I'm doing something that people have told me I couldn't do. I'm kind of breaking borders and pursuing a passion and a love and I think, already, that's kind of going against the system in many ways, just pursuing your passion and not letting people tell you what to do. So, there's that kind of way of being an anarchist without actually having a political agenda; instead, your agenda is to be like, "I'm going to do what I love. I'm going to climb over these barriers. I'm going to invent things that don't exist and I'm going to imagine things that you don't imagine for me." Then, other different artists, their work could be politically charged where they're planting seeds, questioning, pulling out messaging and art in a way. [It's like] you make it and you share it, and you make it and you share it, and through that sharing, you help people question and help people understand and give people options to think about. Depending on what your surroundings are, people could have limited exposure and limited options to think about or opinions to think about, and what art does in many different ways is that it opens up those options and gives us more questions to think about.

As we enter into the new year, what's next on the horizon for you?

NEXT UP
Culture
Art Basel Miami Beach Debauchery & More Party Photos You Missed
Culture
NYLON Party Report Card: Partying With The Stars & 94 Foot Long Whale At The Natural History Museum Gala
The Art Issue 2022
The Most Interesting Fashion Designers Right Now? Artists.
The Art Issue 2022
What It’s Like To Be A Tattoo Artist To The Stars