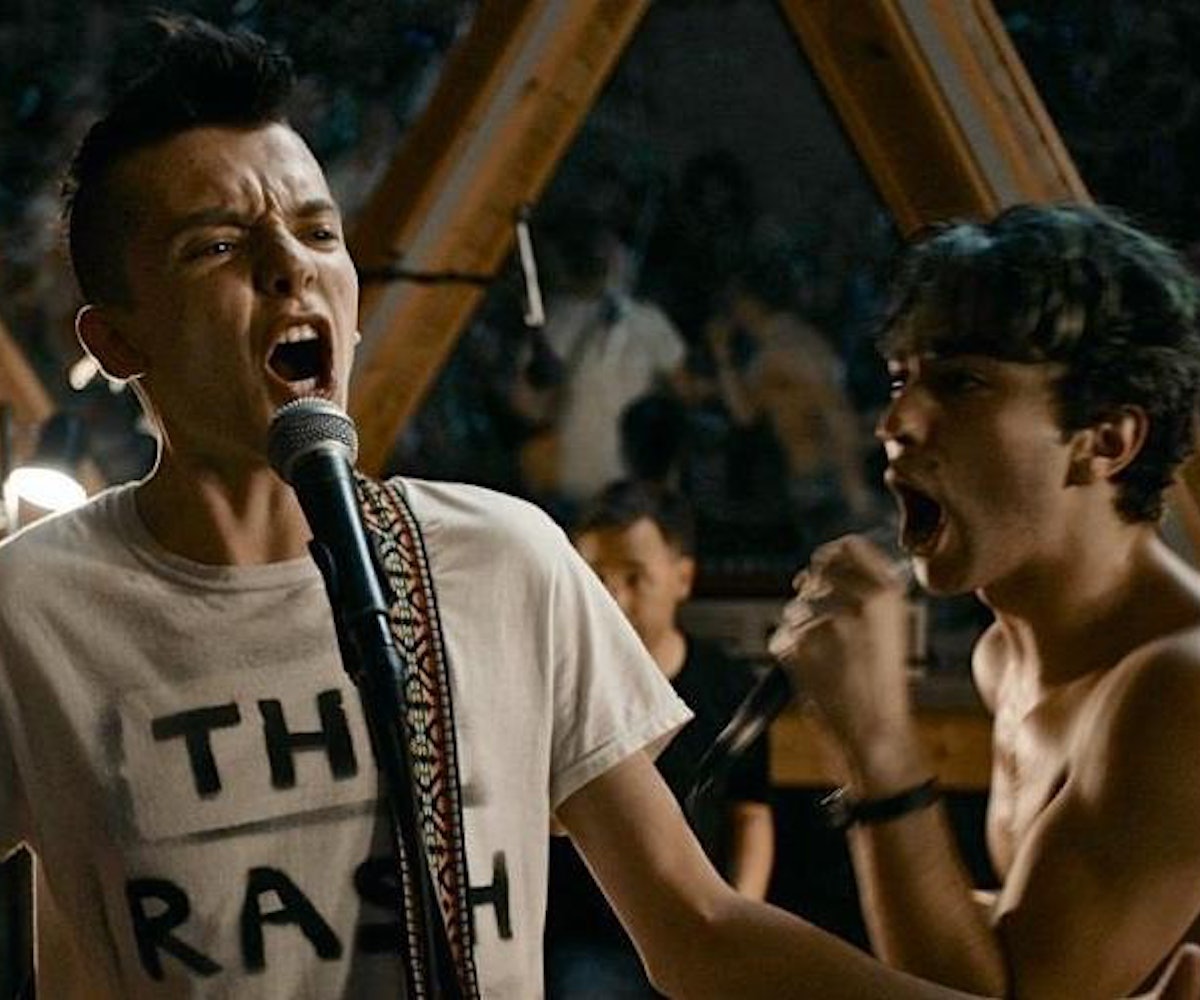 According to actor Asa Butterfield, filming The House of Tomorrow was quite the learning experience. As the star of the coming-of-age dramedy, alongside Alex Wolff and Maude Apatow, Butterfield had to learn how to play the guitar as well as study the works of renowned futurist architect and systems theorist R. Buckminster Fuller—and while it wasn’t easy, he says it was incredibly rewarding.

Based on the 2010 novel of the same name, The House of Tomorrow follows the story of Butterfield’s Sebastian Prendergast, a teen leading an isolated existence with his grandmother in a geodesic dome inspired by the teachings of Fuller. Like most teens though, Sebastian aches to experience a world beyond the confines of the dome and is inspired to pick up a guitar and join new friend, Jared Whitcomb (Wolff), in his pursuit to become a full-fledged punk rock rebel.

Ahead of the film’s release, we talked to Butterfield about everything from his own teenage rebellion to why he’s so drawn to narratives about kids who are completely isolated from the rest of the world. Read our Q&A below.

What drew you to this film and Sebastian as a character?

Working with Alex [Wolff] who plays Jared in the film. He’s really into punk music. I also thought telling a story of teenage rebellion, discovery, and liberation through punk music was quite exciting. Coming from a place where I didn’t know much about punk, I had this opportunity to really dive into it. Like, learning to play guitar and learning to encompass [the quirks of this] character, who’s a bit of an oddball.

My experience was a bit different because I was working my entire childhood. But I don’t think [the isolation] manifested itself in as extreme way as with Sebastian. Then again, I didn’t grow up in a geometric dome with my grandmother for 16 years. My childhood was relatively tame compared with others, because I was already quite mature. I grew up quite quickly.

I had very cursory knowledge of Fuller before this film, but obviously, his work is everywhere in House of Tomorrow. Were you familiar with his work before the film? Did you have to study his body of work as part of preparing for the role?

I was not familiar with him until I read the script, but I was interested in the book and story. I knew nothing really of Buckminster Fuller. It was an excellent education for me in that regard—on his philosophies and his legacy.

There’s been a recent wave of films focused on teens who grew up in complete isolation or were completely sheltered from the world, like Midnight Sun, Everything, Everything, and The Space Between Us—which you also starred in. Why do you think that’s the case?

The films about coming of age or teenage rebellion are always going to be relatable to people because everyone’s been in that position. Everyone’s kind of gone through that, so I think that it’ll always be very prominent or accessible. Teenage lives are very interesting—they’re more complex at times than adult lives because they’re going through so many changes. They’re discovering things about themselves, and it can be really fascinating and heartwarming, as well as sad, to watch. I think they’re always very powerful.

Between The House of Tomorrow and The Space Between Us, is there a particular reason you think that you’re drawn to stories about kids who are completely separated from the contemporary world?

Some film critics are attributing this new narrative wave to the fact that the world is so crazy right now. Like, it’s nice for audiences to imagine a world where you don’t have to deal with being bombarded with bad news 24/7.

Yeah, there’s definitely a correlation. I’m not sure if it’s a subconscious decision or not, because the world is in quite an unpredictable and scary place at the moment. It's why people go to the movies—to escape and immerse themselves in another world to forget about whatever is going on. [In this movie,] a few characters feel quite disconnected from the real world, like Jared and Sebastian. But yeah, for an audience, it is inviting to [see] something totally different and escape.

For sure. Is there anything else you’d like to add?

People might not necessarily know, but all the music in the film is done live. None of it’s pre-recorded or recorded afterward in a studio. So it’s all got that kind of very real, punk feel, because it isn’t perfect. I think it’s a really important part of the movie, and it really helps kind of ground it. Alex and I practiced and rehearsed all day... and we did write music, but our songs never made it into the film. Whenever we weren’t really on set though, we’d play and write songs.

The House of Tomorrow opens in theaters April 27.