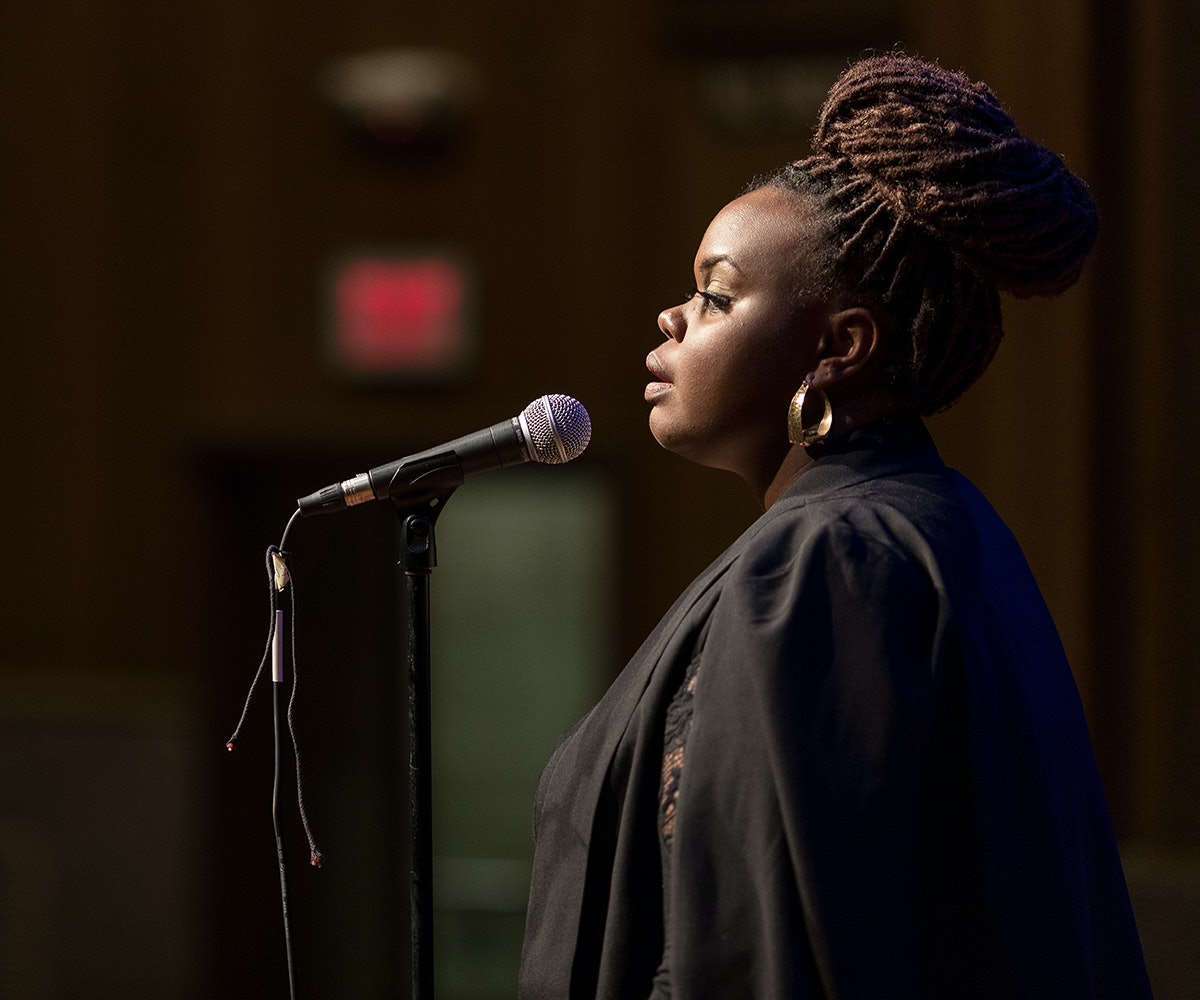 Ashlee Haze went viral back in 2015, but the world still doesn't get enough of her. The Atlanta-based poet and spoken word artist's claim to digital fame was her piece "For Colored Girls (The Missy Elliott Poem)." Growing up in a Christian family as the oldest of three, Haze recalls how her mother believed that she would either become a lawyer or a poet. The first poem that the 27-year-old remembers writing was for a mother-daughter banquet at the age of 10.

Haze graduated from Georgia State University with a B.A. in philosophy with a concentration in pre-law. "I grew so much during that period of my life," she says. "For me, college made me challenge a lot of my belief systems. I began questioning what I believed and what I was told and holding myself accountable to that." With that in mind, she's currently on a college tour, sharing stories about her experiences and mistakes with students.

Last year, Haze published her first book Land Of The Living. A few months after the release, she was featured in the opening track on Blood Orange's thought-provoking album Freetown Sound. Bouncing off of that buzz, she was then invited to participate in THINX's powerful anti-NYFW event and completely stole the show. More recently, Haze was cast in Lane Bryant's #ThisBody campaign.

We caught up with Haze a few weeks ago to find out how she became the poet she is today. Learn more about her journey in the interview, below.

Tell me about your childhood and growing up. How has your heritage shaped the person you are today?

I come from a family of women who, before my mother, really didn't get more than a high school education and worked blue-collar jobs. My dad was a railman for the Chicago Transit Authority. All of those experiences inspire me and my work.

I have a part in my poetry set where in the beginning I do "The Help" poem and tell of the very intricate history of African Americans as domestic workers, and in the poem, I explain how my mother made us clean every Saturday. Later on, I tell the story of Missy Elliott coming to my house and the joke is my mom asked me was my house clean. It was Saturday, so it was! All of my experiences, including the grief associated with the death of my father, have made me who I am and I chronicle those experiences in poems. I grew up a fat, black girl from Chicago. That means I grew up having to work hard at self-esteem. I grew up very aware of what it means to be black and middle class. That frames my story, and that vantage point is the one I tell my story from.

What motivated you to participate in poetry slams? What is your approach as a coach for the Java Monkey Slam Team?

My high school literature teacher, Mrs. Vivky Guy, entered me in my first poetry competition and I won. After that, anytime I would hear about a competition or slam, I would enter. Watching Def Poetry Jam and hearing poets like Tamika "Georgia Me" Harper and Abyss made me want to do what they did. As it turns out, I love competition, and it has made me a better poet and a better person. My approach as a coach is very Socratic, in a sense. I ask a lot of questions—What did you mean when you wrote that? Why do you make that hand gesture when you perform? What do you want the audience to get from this part of your piece? What if you try this? In that way, the poet I'm coaching is always in control of their work and how they perform it. I just like to give them the tools to do things differently, should they choose to.

How did you find your way into what you do now for a living?

I took so many writing workshops. PSI [Poetry Slam, Inc] hosts three major poetry competitions every year, and workshops are a big part of the competition week. They are free to participating poets so I learned from people who were successful in poetry. I also attended the Pink Door Writing Retreat which is now exclusively for woman identifying and gender non-conforming people of color. There, I had some of the most cathartic workshops and conversations I've ever had. I also just asked a lot of poets who are full-time artists what they did to get there. So I took their advice, kept my nine-to-five and worked on my dreams from five to nine. After investing so much time and money into my art, I began to notice a return. In 2016, I got a call from The College Agency with an offer to represent me; I accepted, and the rest is history. Youtube and social media have played a major role, getting my work to audiences all over the world. I still feel like there's a phantom factor to how this all happened. I'll just call it divine timing.

Can you tell me more about the process of putting Land Of The Living together and the content that is featured in this collection?

The book is divided into two parts, "Grief" and "Life goes on." The first half of the book deals with different forms of grief, specifically the loss of my father and the grief that's a result of the violence inflicted on people of color. Poetry has always been cathartic for me, so I write what I feel. I'm also a firm believer in balance, so the second half of the book deals with joy and the good that has happened to me. It deals with my experience of black girl magic and self-love. The book contains poems that span about 5 years, so I just took some of my best writing and put it into this book.

"For Colored Girls" went viral to the point where you were actually able to meet Missy Elliott. How does it feel knowing that your work resonated (and still resonates) with so many women of color?

It's still a bit surreal for me. Although I know it was a slow process, it still kind of feels like I just woke up one morning and "role model" was a hat I put on. It's a hat that I wear proudly. There's no better feeling than having all sorts of brown girls come up to me after a show and just confirm our shared experiences. I feel like I'm in an exclusive society and I have sisters all over the world.

What was the experience of working with Dev Hynes on the Blood Orange record like?

Amazing. Dev is such a visionary, and it was an honor to help him execute his vision. And what a privilege it is to be featured on an album that spotlights so many women of color, including Ava Raiin who shares the first track with me.

During this difficult period of social injustice, activists are also calling on artists to create. What keeps you inspired to practice your craft?

One of the gems I picked up from Pink Door Writing Retreat matriarch Rachel McKibbens was this saying: "You are an important person and your work is necessary." What keeps me going is the idea that somebody needs my work. If nothing else, I need my work just to keep my sanity! Being able to chronicle my feelings and to have them resonate with someone else who may not have the words for their grief is such a privilege.

Your performance for THINX's NYFW event was so powerful. How do you feel about this new push for body positivity in the fashion industry?

It's way past due, but, also, so on time. I have never been more proud to be a plus size woman of color. I feel more visible than I ever have, and I am starting to see more WOC where there has previously been a lack. I applaud THINX and the work they do for women across cultures, identities, and classes.

What are some of your personal goals?

One of my goals is to help shape the acceptance of art as a business. Sometimes I find myself having to work so hard to justify what I do—"Yes, I'm an artist. Yes, my art is my business. No, I don't eat ramen noodles every day"—and break the stereotypes. Another goal is to empower young women of color. I love to teach poetry and teach body positive workshops. Kola Boof said, "The black woman is the only flower that grows unwatered." I want to water our babies and give them a chance to really and truly walk in their purposes.