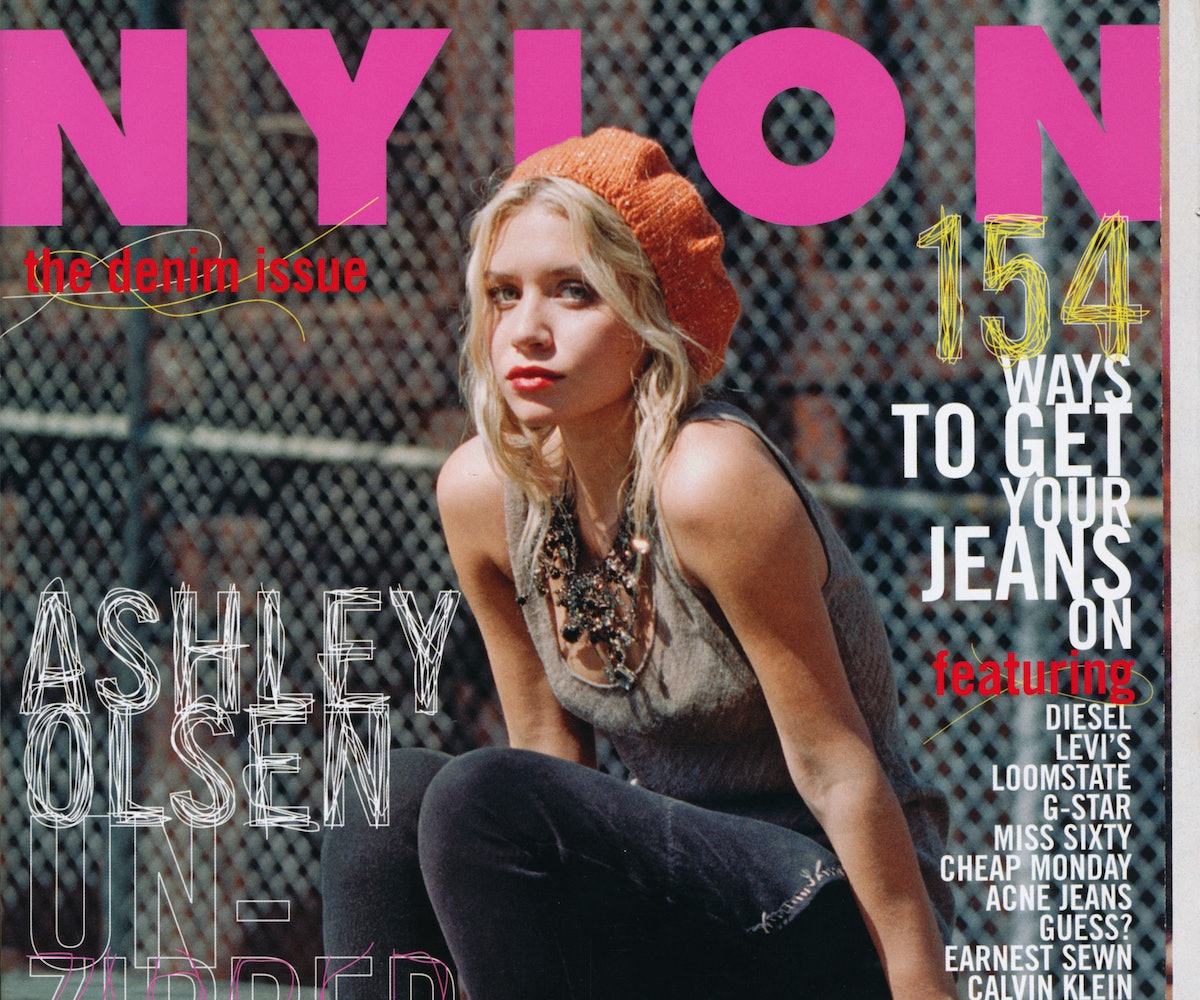 According to a well-known Native American legend, each time someone “takes” your photograph, a piece of your soul is captured. A person’s image is, in the Native Americans’ estimation, an entity of incredible value, to be protected and preserved, never squandered. And perhaps they have a point, because there is something particularly soulless and loathsome about the stars whose airbrushed faces constantly saturate the media. (Jessica Simpson, devil spawn? Hmmm…) But there’s also a marked difference between those who live to flash their glossy mug, and those who pose for photographs with more measured consideration. Ashley Olsen falls squarely into the latter category.

“I’ve learned over the past two years that the only person who can control it is you,” Olsen says. “If you want your picture taken you know where you have to go. But I’m the type of person who would rather stay home than get my picture taken. It’s intrusive…and I get that it should be flattering in a weird way, but at the same time it’s not me and I don’t feel comfortable. Olsen and I are sharing a back table at the tiny restaurant Bread in New York’s Nolita neighborhood, where yes, she actually does eat. It comes as no surprise that in person she is positively miniature, a fact only highlighted by the fact that on this spring day half her legs are swallowed up by the army green rubber of L.L. Bean-esque wellies. But her small stature definitely doesn’t allow her to blend into a crowd. Olsen is, in a word, breathtaking. The beachy waves of her hair fall in interlocking patterns of gold, platinum, and ash blonde around a seemingly pore less, carmel-hued complexion and a petite button nose; her eyes are platter-sized pools of turquoise blue framed by long, inky lashes; her pillowy lips seem, even at rest, to be curled into an upturned pout. She exudes a confident sophistication that seems far beyond her actual age, scarcely 20 years old. Only when her mouth stretches into a broad smile does the slight star seem much, much younger. But while Olsen may be at the age in Hollywood when one’s social life becomes public domain, she leaves that to her peers. “I’m the most private person. I hardly ever do photo shoots, and I hardly ever do this,” emphasizes Olsen, referring to, I presume, her decision to grace the cover of this magazine. “I like staying out of the press so that when I do something or actually come out with something, it’s surprising and exciting. And people will want to know what you’re up to, as opposed to already seeing you in those magazines every week.”

Ashley Olsen has spent a lifetime piquing people’s interest. Cast, alongside twin Mary-Kate, at the tender age of seven months on the family sitcom Full House, she has never not been in the public eye. As the precious Michelle Tanner, a strawberry-blonde troublemaker prone to peppering conversations with phrases like, “You’re in big trouble, mister,” or “You got it dude, “ the twins promptly stole the show (they shared the role). By the end of the series in 1995, they had achieved international fame, a cult-like following among the “tween” set, and a set of friendships that would have staying power beyond the set. “I still see Bob [Saget] all the time, “ says Olsen matter-of-factly. “I go to the Laugh Factory to watch his stand-up and I’m involved with his charity. I probably see him and John [Stamos] the most, but we’re all really close.” And how does she feel about Saget’s ahem, “blue” transformation, particularly his astonishingly raunchy turn in The Aristocrats? “Typical,” claims Olsen. “We [Saget, Stamos. and Mary-Kate] will sit at a dinner table and he will just clear the restaurant out because that’s how he talks. Dirty. Saying the crudest things so loudly. Bu that’s what he’s like on a day to day basis. It’s scary that I came out the way I did growing up on set.”

The way she came out it, in a nutshell, hugely successful. Record-breakingly so, in fact. The Olsens were the youngest producers of all time at age six and the youngest entirely self-made millionaires, earning that honor before they reached the age of 10. But though their mainstream audience recognized the pair primarily from their sitcom sojourn, the Olsens’ cash cow did not come courtesy of television. Imbued with an entrepreneurial spirit seemingly at birth, the Olsens and their parents hired Robert Thorne in 1989 (initially as their entertainment manager but his position grew as their commercial opportunities did) and created Dualstar, a multimedia group whose sole purpose was to nurture and market the twins’ burgeoning image. That image would be conveyed via dozens of films with nauseatingly cutesy names like How The West Was Fun, musical albums, books, and of course the endless amount of merchandise- the twins’ signature skirts grace everything from pillowcases to perfume to pinafores. But, unlike other stars who build empires on life-style branding by simply signing on the proverbial dotted line, Olsen is quick to point out her extensive contribution. “We have been really involved in the process from the beginning, even when we were just 10 years old,” she says. “We really don’t want our name to be on anything we don’t approve. It happens to so many people, and my sister and I just want to keep it true to ourselves and not sell out like that. We’ve been able to learn a lot over the years, and the more you know the more you want to control things.”

Accordingly, in 2005, on their 18th birthday, the Olsens shimmied into shared executive roles after taking control of Dualstar Entertainment Group. Now with complete creative reign, Olsen is on a mission to execute her own vision. That includes inviting new, young designers into the company’s infrastructure, creating juniors and boys lines for Wal-Mart, and dreaming up a high-end line to be sold at small boutiques, where it promises to cause considerable pandemonium.

Why would people care about owning an Olsen-designed tunic? A visit to eBay is illuminating that regard. Type the name (or in this case, adjective) “Olsen” into the site’s search engine and you will be greeted by a list of items that have been deemed quintessentially Olsen: frisbee-sized sunglasses, slouchy leather hobo bags, distressed boots with scuffed toes, and loose, silky ’70s-print dresses. All are remnants preserved (and still coveted by many) from the boho revolution the sisters started, purely by accident, just a few seasons ago. Though it’s clear looking at Olsen today that the gypsy is long gone- she now gravitates towards all things simple and monochromatic, claiming a particular fondness for the perfect white T-shirt and jeans. “Boho,” and its fancier cousin “bobo,” may have become bad words in celebrity style circles, but no one can deny their profound effect on fashion. “I mean, it’s very flattering,” Olsen claims coyly when I ask what it was like to be crowned a style icon before age 20. “My sister and I just wear what we want to wear. We don’t have stylists. We just go shopping and buy what we like without ever following anything. So it’s cool to be called a style icon because it’s not like someone else has created it, it’s all just us.” That may not sound like an unusual feat, but in the sea of sameness that comprises the current Hollywood fashion courtesy of a handful of lackluster stylists, it most certainly is. It’s a concept that finds its roots in old Hollywood, and for a girls who is quick to name luminaries like Audrey Hepburn and Brigitte Bardot as style inspirations, it’s one that fits. Besides refusing to adopt the standard celebrity stylist, Olsen also adamantly eschews any and all overtly sexual attire. “I don’t think you necessarily need to show off your stomach and boobs to be sexy,” says Olsen firmly. “I’m just not attracted to that type of dressing.”

Perhaps it’s a remnant from her squeaky clean child-star past, but the choice to resist overexposure is a mature one. There is even a reserved quality about her denim choices- you will likely never catch Olsen in anything bejeweled or bottom-baring. “I never used to wear jeans because they never fit me, as I’m so small,” she says. “But I love Tsubi, and I’m not just saying that because, you know…[For those who don’t know, Olsen happens to date Greg Chait, North American CEO for the denim brand.] they kind of originated the whole denim art thing and brought it to the States, and they’re the only jean I can wear that doesn’t have to be tailored.” Besides the famously lean Tsubis, Olsen’s denim taste runs towards classic, straight-leg Earnest Sewns and high-waisted vintage Levi’s. “People will definitely beg to differ about high-waisted and how unattractive it is,” says Olsen knowingly. “But I just thing it’s so classic and cool, and whether or not it goes out of style I don’t care. I’ve always worn my pants up to here [motions skywards] whether they’re sweats or jeans.”

When she’s not running an empire or setting fashion trends, Olsen spends the rest of her time immersed in her studies 9psychology and architecture are favorite subjects) at NYU’s Gallatin School, a topic she discusses with genuine enthusiasm. It seems that besides being a fashion icon, Olsen is a bit of a geek. Though she may have been spoofed in Pink’s ode to the obtuse, “Stupid Girls,” I find Olsen to be anything but- her speech is remarkably devoid of typical slang, and her business savvy is, well, obvious.  But what about Olsen’s acting? Was that simply a childhood pastime? Not exactly. “I really just want to wait and fid the right project with the right people,” she says. “I’ve taken this time and studied and worked on it [acting], and I’ll study it forever. I’ve auditioned a couple of times. It’s been good for me to not only prove to other people but also to myself that I can actually do this, and that it’s not something that will just be given to me because I’ve done it for so long.”

In Spike Jonze’s 1999 film Being John Malkovich, John Cusack plays a puppeteer who discovers a portal that grants him admission to the mind and life of actor John Malkovich for 15 minutes- an experience he then begins to offer to the public for a fee. It is the ultimate spoof on the 15 minutes of fame that Warhol once announced everyone would experience, and it’s a prescient concept. Love her or loathe her, one thing is undeniable when it comes to Ashley Olsen: it’s hard not to be interested in her. Not because of her credentials on her resume, or because of her status, according to Time magazine, as one of the most powerful women in fashion, but simple because she is Ashley Olsen. And being her if only for 15 minutes would be an enticing proposition.