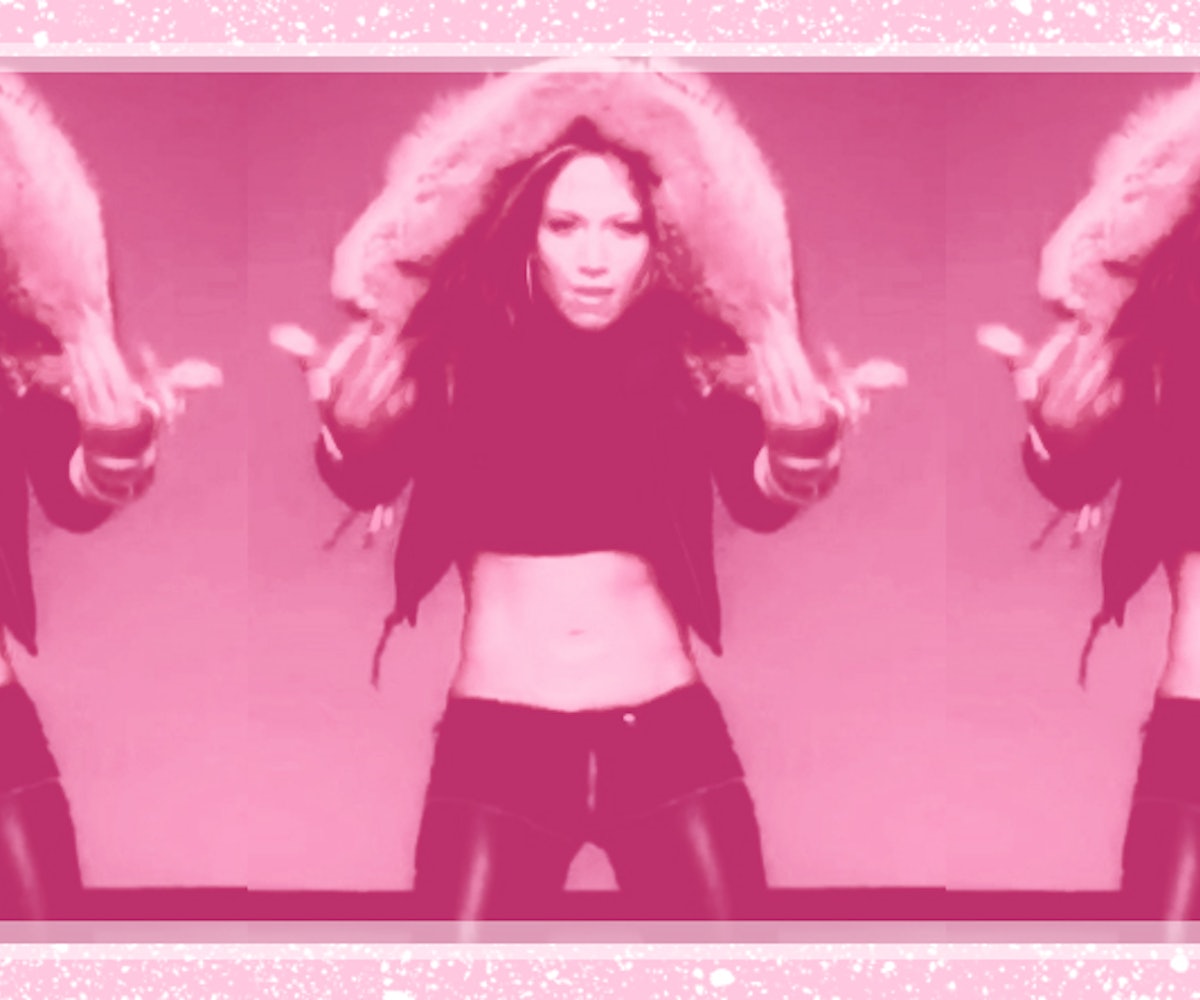 We're not afraid to admit that every once in a while we start to feel a little nostalgic about the aughts. Filled with plastic choker necklaces, reality TV, and, best of all, perfectly costumed and choreographed music videos, what's not to love about this decade? Sure, we may have a few fashion regrets that happened between 2000 and 2010, but we have to admit that sometimes aughts fashion had it just right.

The early 2000s was also a formative time for many of our current favorite pop stars (hello, Beyoncé, Shakira, and J.Lo) so it comes as no surprise that the trends they were rocking back in the 00's are things we would totally wear in 2015. Turn-of-the-century music videos featuring now-defunct girl bands and singers who have since stepped out of the spotlight were a place for some major style forecasting. Think more crop tops, clubwear looks, and sportswear ensembles than we can count. For some serious outfit inspo, we're rounded up our favorite looks from aughts music videos—and we're showing you how you can rock 'em in 2015.

There may be nothing that embodies the year 2000 more than a group of Swedish teens singing ABBA-influenced pop music while wearing white, minimalist ensembles. Nothing. The early aughts were a time for monochromatic outfits to thrive, and in the past few months we've definitely felt a renewed appreciation for all-white ensembles. To master the look today, we'd pair a sleeveless crop top from American Apparel with slouchy Free People pants for a balanced silhouette.

While she'd been stunning the Spanish-speaking world for years, Shakira began singing in English in the early 2000s, much to the delight of listeners everywhere. Long before "Hips Don't Lie" and "Shewolf," the polyglot pop star rocked a bare midriff—but with a much different aesthetic. With a fringed top and braided hair, early 2000's Shakira was a bohemian babe. For a festival-ready outfit, we'd recreate her look with a Free People top and Urban Outfitters hat.

This Swedish group may have had its fair share of drama—breaking up, gaining new members, and breaking up again—but it most definitely had retro style down to a T. The video for "Whole Again" is set in a distinctively 2000's version of 1957, with plenty of choker necklaces, heavy eyeliner, and chunky knee high boots to go around, but the general vintage feel is something we keep going back to. This is twee before Zooey Deschanel—and we'd totally try out the look with a Modcloth dress and hat.

It doesn't surprise us in the slightest that Queen B was already serving up some major looks back in '04. While Yoncé, Kelly Rowland, and Michelle Williams certainly debuted a couple interesting outfits during their band years, the simplicity of their looks in the "Cater 2 U" music video make it work. You can never go wrong with a simple, low-cut black dress (like this one from Nasty Gal)—a style mantra that Bey has definitely maintained in the past decade.

Out-of-season crop tops have always had a special place in our hearts, ever since we saw J.Lo rocking one under a parka in her '04 video for "Get it Right." The all-black look is just the right mix of sporty and chic, and if we had abs like the pop star, you know we'd be showing them off too. Still, this is a winter look we'd recreate with ease: Just grab some high-waisted leather pants from Nasty Gal, a turtleneck crop top from Rachel Pally, and top with a warm Ralph Lauren parka.

On her hiatus from No Doubt, Gwen Stefani proved to us that she has a style of her own. Before embracing her rockability retro-cool aesthetic, the ska singer rocked some majorly cool skater-girl vibes. Beanies, crop tops, and accent jewelry are just as important in our wardrobes now as they were back in 2005. Some things just never change. Today we love this Nasty Gal top paired with an ASOS beanie and Free People ring.

The sportswear look of the mid-aughts was a deceptively difficult one to master. Juicy Couture sweatsuits may have been all the rage for a solid few years, but the trend becomes much more wearable (and more impressive) when it's not accomplished through a matching set. With her sweatpants and hoodie over a metallic bikini, Cassie nails Health Goth before it was ever really a thing. With an American Apparel bikini, Urban Outfitters hoodie, Monrow sweats, and classic Nikes, we'd hit the gym (or just hang out at home) in style.

The aughts were a major moment for girl groups like 3LW, comprised of Adrienne Bailon, Kiely Williams, and Jessica Benson. While the video for "Feelin' U" is quintessentially 2006, there's one thing that never goes out of style: a glamorous silver dress. The girls look their best in shimmering cocktail dresses and long earrings. We wouldn't be opposed to trying on this look for our next girl's night out with the help of a Dress the Population frock and Urban Outfitters earrings.

Somewhere after her baggy pants-and-tie grunge phase and before she married that guy from Nickelback, Avril Lavigne served up some major punk-princess vibes. We've got to admit: The Canadian singer sure knows how to rock a plaid mini skirt, one of our eternal wardrobe staples. Save the fishnets for Halloween and we'd rock this getup in a heartbeat with an Urban Outfitters skirt and Everlane tee.

Before she was swimming with the sharks or winning top honors at the CFDA Awards, 19-year-old Rihanna was taking the world by storm with her VMA-winning video for "Umbrella." While she looks effortlessly cool in every second of the video (and every second of her existence), there's nothing quite as timeless as her Marilyn Monroe-inspired white frock. Before Rihanna became an icon in her own right, it's clear she drew on inspiration from others. With an AQ/AQ dress and ASOS pumps, the look can be yours too.

NEXT UP
Entertainment
19 Niche Music Festivals For Every Type Of Person
Fashion
Apple Martin Is A Chanel Girl Now
Entertainment
Harry Styles Is Performing At The 2023 Grammys
Entertainment
Raye Explicitly Speaks Her Mind On Debut Album, ‘My 21st Century Blues’
Style + Culture, delivered straight to your inbox.