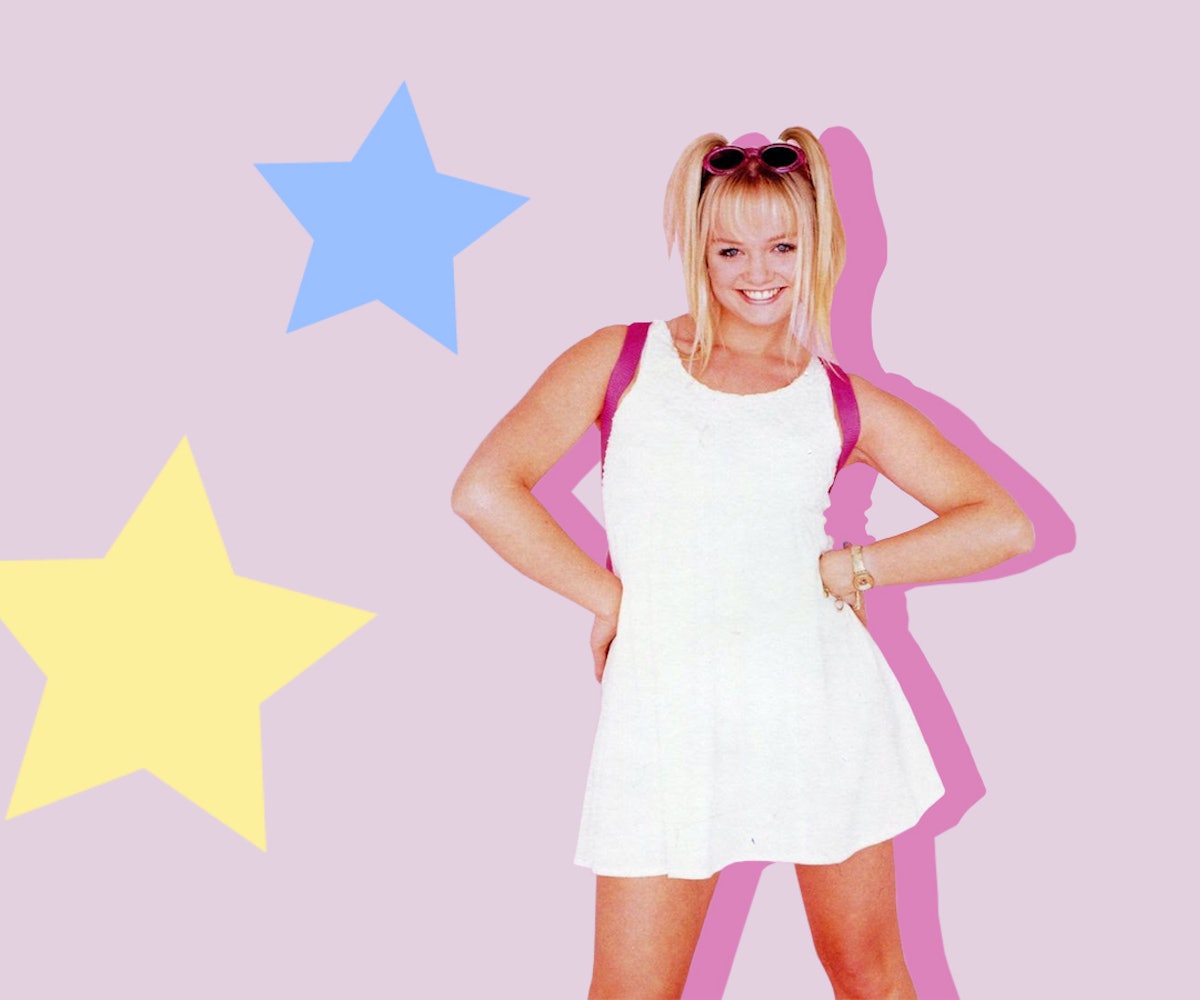 The Spice Girls were a marketing vehicle, right from the get-go. As David Sinclair outlines in his book Spice Girls Revisited: How the Spice Girls Reinvented Pop, talent managers Bob and Chris Herbert knew they wanted “a girl band which was both sassy, for the girls, and with obvious sex appeal, to attract the boys;” by 1994, they had it; by 1996, "it" would prove to be bigger than they had ever imagined.

Scary, Ginger, Sporty, Baby, and Posh Spice were a phenomenon raking in wads of money and promoting a new wave of Girl Power feminism to boot. Each member represented a certain archetype of female: the sexy one (Ginger), the tomboy one (Sporty), the fashion-forward one (Posh), the no-holds-barred one (Scary), and the innocent one (Baby). As it turns out, the nicknames weren't a part of the plan, but a "lazy journalist," according to Melanie Brown (Scary Spice), couldn't be bothered to remember their real names, so they made them up for a feature interview. "Posh was the first one to be thought up because Victoria [Beckham, née Adams] looks pretty sophisticated," Peter Loraine, the writer behind that Spice Girls' story, allegedly said. "The rest were pretty easy, really, because the girls' characters were already really strong." Hence the makings of a strong, universally appealing girl group.

Why Baby Spice, though? It's not like Emma Bunton acted like a child. Sinclair writes the nickname came about because she was the last member to join, the youngest, and the smallest—the baby of the group. Pop is a money-making machine, however, and saw that as a marketing tool; soon enough, Baby Spice, the blonde pigtail-haired, blue-eyed character was singing about two becoming one in slip dresses and Buffalo platforms, lollipop in hand. She was the innocent and pure Spice Girl; she was never not beaming. And according to various polls, Baby was the most popular Spice.

Indeed, the vast majority of the girls I grew up with always fought over being Baby. I asked a few why and one said it was because "she wasn't as intimidating" as the others; another simply enjoyed her playful aesthetic. That is pop marketing at its finest; beneath Baby Spice's cheeky naïveity was the very personification of the adult longing for a lost youth. Dr. Logan Jones, a licensed clinical psychologist in private practice, explains how the "trying and dysfunctional" aspects of the world elicit a weariness within ourselves. "Baby Spice reminds us of that zest we may have lost," he says, "which is both enticing, and perhaps haunting, depressing, and enviable." That adult envy extends further into our innate desire to possess the "healthy narcissism," or the self-fulfilling, -assured, -dependent characteristics a child possesses, he adds. Baby Spice's appeal was, at its root, nostalgia.

From a marketing standpoint, though, Baby Spice had the qualities good children's movies have: adult themes hidden within narratives that kids can enjoy. She evoked a Lolita figure and was marketed as such. Bunton mocks her role in the 1997 film Spice World saying, "I’m always going to be seen as Baby Spice, the sweet and innocent one—even when I’m…30.” To which Posh agrees, saying it's because she can get away with anything because of her "cute little smile." That sense of whimsy is all the more powerful because of how it contrasts with the fact that Baby Spice was actually a grown woman, and part of one of the world's most popular musical acts. Dr. Andrew Getzfeld, an adjunct associate professor of psychology at NYU, expands on this, calling her character "a juxtaposition of a young woman, who [because of her age] we presume is sexual, dressing as a young girl, so to speak. At the same time, there’s that underlying sexuality which can be seen as dangerous that’s going to sell tickets and push CDs." Spice World parodies this again when Posh dresses as Baby, pulls her blonde pigtails out, walks to the camera like a child and, in a baby voice, says "My mommy is my best friend." People wanted to be Baby because youthfulness and sexuality sell.

"As a culture, we are bathed in these images, skillfully rendered in mass advertising, sculpted in the operating rooms of cosmetic surgeons, and reinforced by peer pressure every day in the lives of both young and old," Michael Bader writes in Male Sexuality: Why Women Don't Understand It—and Men Don't Either. As the coquette, Baby Spice's character played right into that. Dr. Jones explains the coquette is, in and of itself, a contradiction replete with opposing signals: "look but do not touch; you may want me, but you may not have all of me." He adds that this character can be "confusing, intriguing, and, most of all, highly intoxicating to many." This includes a younger generation who subconsciously takes in these images and applies them to their own lives.

Baby Spice's redeeming factor—well, the redeeming factor for all of the Spice Girls—was Girl Power. In a way each member was a coquette, Baby Spice just happened to be the least intimidating of the five. "The less likely you are to need other people," Dr. Jones says, "the more people are drawn to your apparent self-confidence and self-fulfillment." Baby Spice embodied this and then some because she was the vivacious, seemingly pure image of youth. She brought a playfulness to the Girl Power movement, made it more consumable to those who may not have seen themselves in the fashionable portrayal of Posh or (lightly) sex-positive portrayal in Ginger. Through Baby, the message of Girl Power could resonate with a younger demographic. Don't get it twisted, though, the allure of Baby Spice wasn't just playfulness. It was marketable purity that made her seem like she was sent from above when really, she's not, and never was, that innocent.