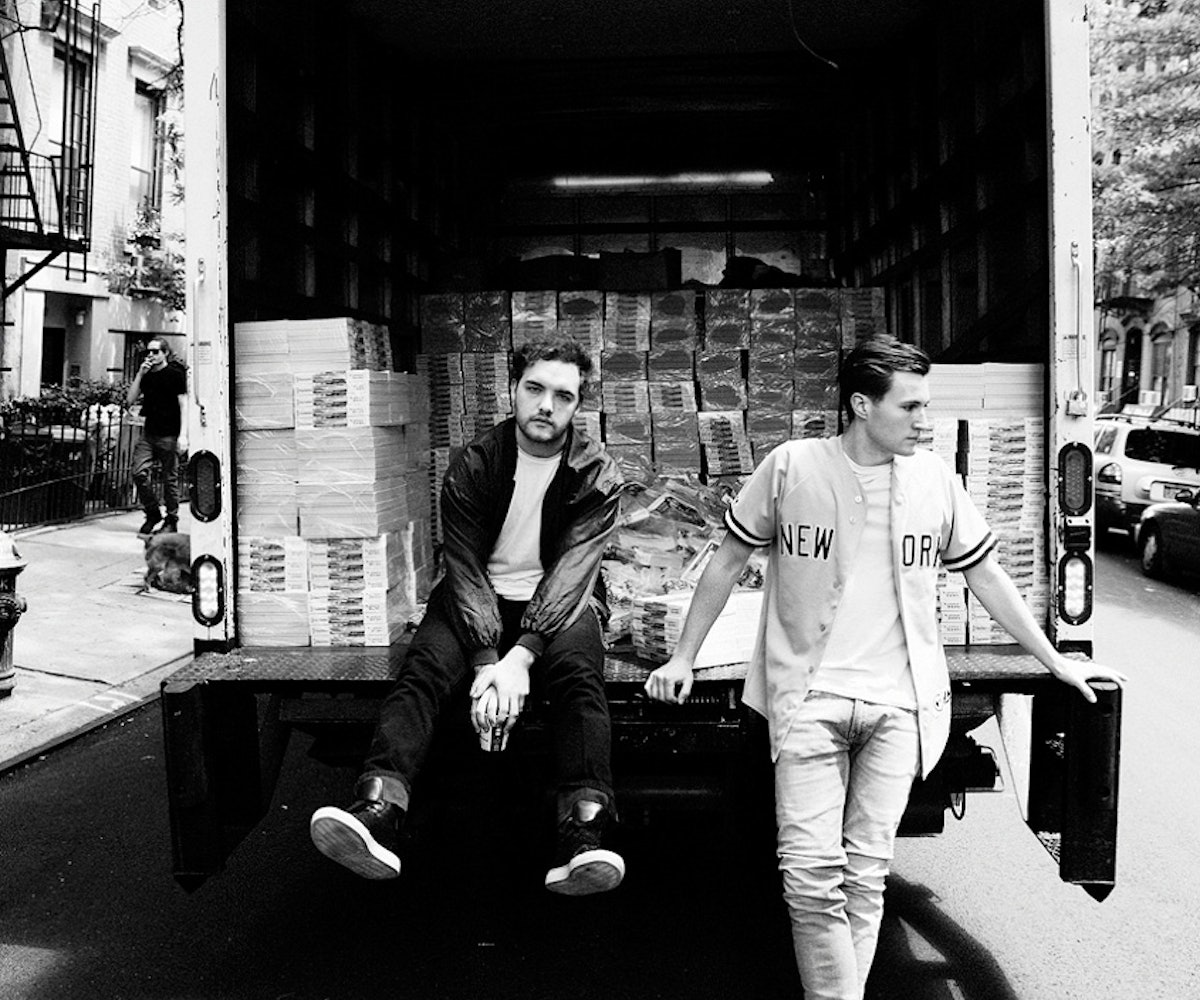 After meeting while studying at NYU a few years ago, 23 year-olds Jesse Aicher and Matt Walsh began making music together on a lark. Together, they became Prelow. From there, what started as a hobby has evolved into a full-time endeavor with major label backing, devoted fans, and a debut single that quickly went viral on SoundCloud last summer. Now, Aicher and Walsh have released their debut EP, Why Does Everything Happen So Much, a five song collection of fun electronic pop. Here, the duo discuss Prelow’s unique sound, emerging from SoundCloud obscurity, and why a simple lyric change made all the difference in the world.

How would you describe your sound? It’s kind of hard to pin down.

JESSE: It’s always really difficult. I feel like the best way to describe it is that half of our music is inspired by hip hop and half of it is made by somebody who grew up listening to the Beatles and The Strokes.

MATT: We were having trouble finding our genre in the iTunes store. We had to choose between Alternative and Electronic and we don’t really fit into either of those.

So are you guys excited to have people hear this EP? Are you nervous?

JESSE: I would say I’m pretty exited for it to come out.

MATT: It’s been done for so long.

JESSE: “Mistakes Like This” was actually one of the first songs we ever made together and that was two and a half years ago. We made a ton of songs and scrapped a ton, and through that process arrived at these five songs. It feels good to finally get something out.

The success of “Mistakes Like This” has been crazy. Didn’t it hit over a million listens on SoundCloud just recently? That’s pretty big.

JESSE: A month ago it passed a million. That was crazy because there really wasn’t any promotion behind it. At some point it started trending on SoundCloud, but it seems like people just sort of discovered it on their own. Which is weird. I don’t know how that happened.

MATT: Since we didn’t have a social media presence or a strategy, we became one of those “mystery indie acts” in some of the write-ups. But that wasn’t the plan.

JESSE: It’s a little scary because you really don’t know how people are going to respond. You can have a ton of followers on your SoundCloud page but still have nobody fuck with the songs you put out. So it was pleasantly surprising.

What’s your process when it comes to putting together your songs?

JESSE: “Mistakes Like This” came about when Matt was messing around with cutting up an Italian opera score and he made this 15 second loop that sounded really cool, so we started off that. I went home later that day and wrote most of the lyrics. The big line in the songs is, “My dick takes over,” but it was originally, “My mind takes over.” Matt suggested that we changed “mind” to “dick” spur of the moment and we laughed, but ultimately we recorded it and it was great.

I think the honesty of the lyrics resonates with people.

JESSE: I hope so. And thank you! There’s not really a conscious process behind writing the lyrics. At the time, I was just thinking about all these desires and insecurities with women. These things I want, but also feel like I should be shameful for wanting. Like, I want to have sex but I don’t know that it’s okay morally to pursue it in an aggressive way. And that’s what the chorus is about, admitting you want that, while also admitting it’s not the most noble pursuit.

How did you guys meet?

JESSE: We were both going to NYU and we transferred into the same music program at the same time. We got to know each other through some parties and at some point we started making music. At the beginning it was just fucking around; I play guitar and Matt has worked in hip hop in the past, so it was exciting to work with someone with a completly different musical mindset.

MATT: We had a class when a producer came in named David Kahne (who’s worked with Paul McCartney and Lana Del Rey). He came in and heard “Mistakes Like This” and liked it. So he invited us to the studio to polish it with him. It was validating; this famous producer wanted to work with us. It turned out really good! We finished three songs with him and started sending them out and that’s how we got our manager.