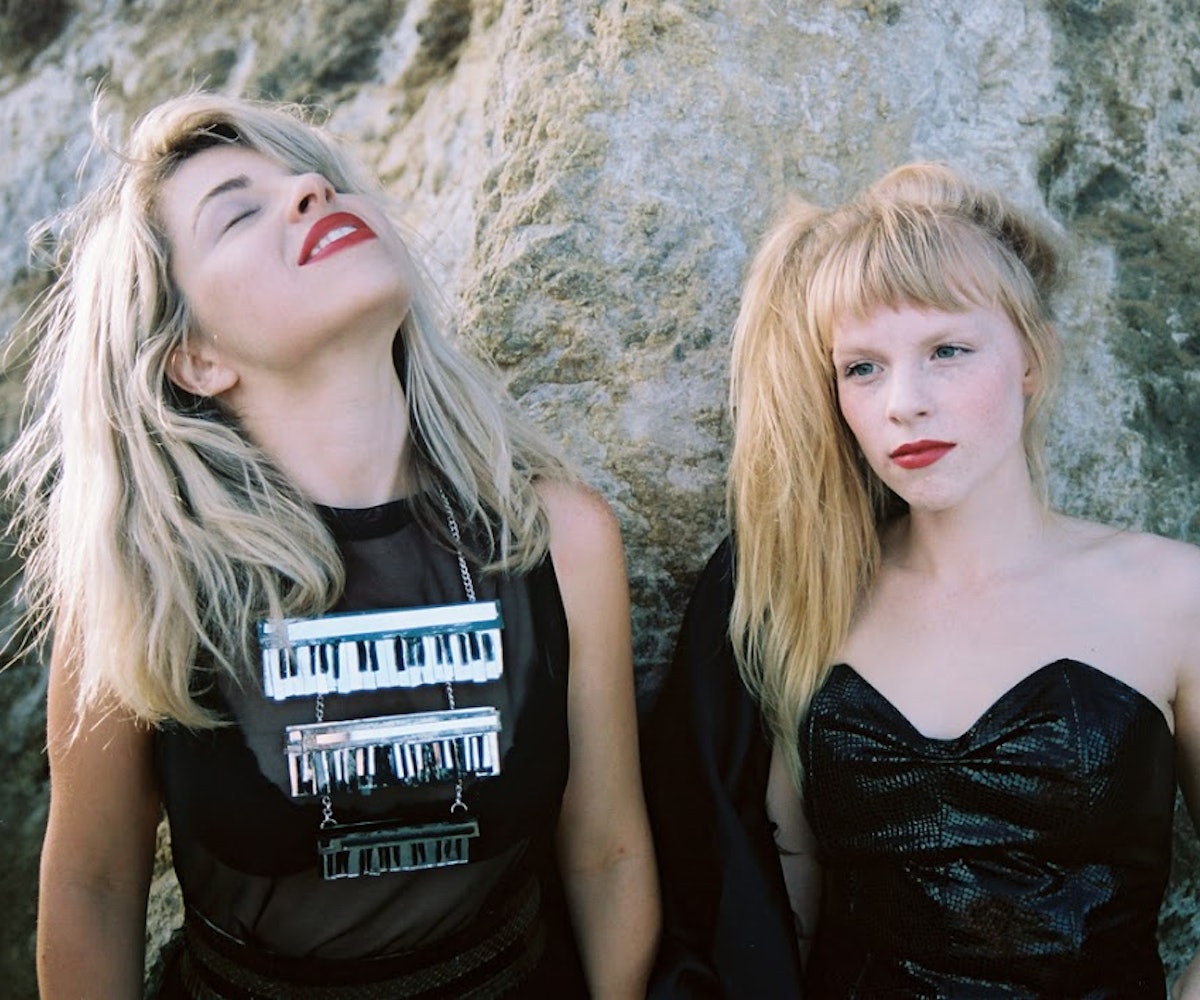 It’s Tuesday evening in New York City, and as Stevie Nicks twirls beneath the bright lights at Madison Square Garden, where Fleetwood Mac is wrapping up a two-night stand, Piper Kaplan sits on a concrete staircase near a dimly lit Brooklyn street corner.

Nicks is onstage with four world-class musicians, two of them ex-lovers. Here in Brooklyn, it’s just Piper, 26, and her 19-year-old sister, Skylar, her guitar-playing partner in the transfixing L.A. dream-pop duo Puro Instinct. For reasons having to do with their hometown and druggy sound, Puro often gets compared to the Mac, though the Kaplans have way less firepower.

“I really love the band Suicide,” Piper tells NYLON, referring to the legendary NYC minimalists who fused menacing proto-punk and synth-pop back in the ‘70s. “They’ve always been a really huge influence on me. I feel like our live setup right now is similar to theirs.”

Again, almost. When Piper and Skylar perform an hour later at the tiny club Glasslands, previewing songs from their forthcoming sophomore album—due out sometime next year on a label yet to be named—they’ll be joined by “The Amazing Amy,” an elderly contortionist who walks with a cane yet easily tucks her ankles behind her head.

Piper doesn’t mention Amy before the show. Maybe it’s because the singer and keyboardist is more concerned with finding collaborators that can play instruments and help Puro Instinct bring its screwy, slightly scary bubblegum sounds to life.

“It’s not permanently going to be this way,” Piper says of the two-woman format. “But we’ve that found in terms of getting the songs to actually sound how we want them to, we need to find people that are actually up to the task of making it sound like it does on the record. We’re willing to hold out for those people to show up. So if you’re out there, holler at your girls.”

On the surface, the Kaplans can seem like a couple of L.A. scenesters having a laugh. Piper talks in interviews about drugs and booze and general L.A. debauchery, and on the cover of Puro’s weirdly enveloping 2011 debut, Headbangers In Ecstasy, she and Skylar lay side by side in white lingerie. Plus, they’re good buddies with indie troublemaker Ariel Pink, who played on Headbangers and contributes guitar to one of the new songs. But these girls take their music rather seriously. They both chose the band over college, and recording their new LP, they did everything on their own, hence the four-year wait.

“We wanted it to be the purest representation of ourselves at the time,” Piper says. “We had to teach ourselves how to use the tools that were available to us, which were basically a laptop and some shitty microphones—and an open mind, I guess.”

They must have learned well. Last month, they posted the single “6 of Swords” on Soundcloud, and whereas their Headbangers material was hazy and woozy and all those adjectives used to describe the narco-retro “chillwave” music popular at the time, the new song is something like a club jam. It’s a record Madonna might make after binging on Grimes, if not the other way around.

“We’ve gone through a lot of changes over the years, and we’re still evolving now,” Piper says. “I definitely am not the same person I was when I was 21 or 22, when we started the band. I’m such a different person. I don’t know if that’s for better or worse.”

A question that deep is perhaps best left to Teal Swan, the “spiritual catalyst” whose inspirational videos Piper can’t stop watching. A self-professed “YouTube geekazoid,” Piper is obsessed not just with the teachings of this crazy-eyed New Age guru, whom she’d like to write muzak for, but also with the wonderful bits of musical ephemera (long-forgotten electro-funk, Soviet New Wave, and Asian dance-pop clips) she regularly posts on the band’s Blogspot site, done up to look like a Geocities page circa 1994.

While all that kitsch and musical geekery—ironic or not—factors into the music, Piper says it’s her relationship with Skylar that truly drives Puro’s aesthetic.

“Probably the biggest influence on us at this point is just our love for each other and that connection that we’ve been able to strengthen through isolating ourselves from everyone else,” Piper says.

It might not be just the two of them for much longer. While in Brooklyn, Piper met a drummer she’s pretty psyched on, and if he takes, there won’t be many more shows like the Glasslands one, wherein she and Skylar do a kind of fever-dream dance-pop karaoke, imagining what Tiffany and Debbie Gibson might have looked like rocking the Twin Peaks Mall. There are plans to promote the new LP in Japan, and before then, Piper would like to put together a “sick live band.”

Ex-boyfriends with instruments? It sounds a bit like Fleetwood Mac, even if Puro’s music—particularly the new stuff—doesn’t. If this incoming percussionist doesn’t work out, Piper should make a play for Stevie’s old squeeze Mick Fleetwood.

Then, she reconsiders and says something she probably means as self-deprecating, but that sounds a whole lot like the truth.

“I don’t know if he can handle this stuff,” she says.