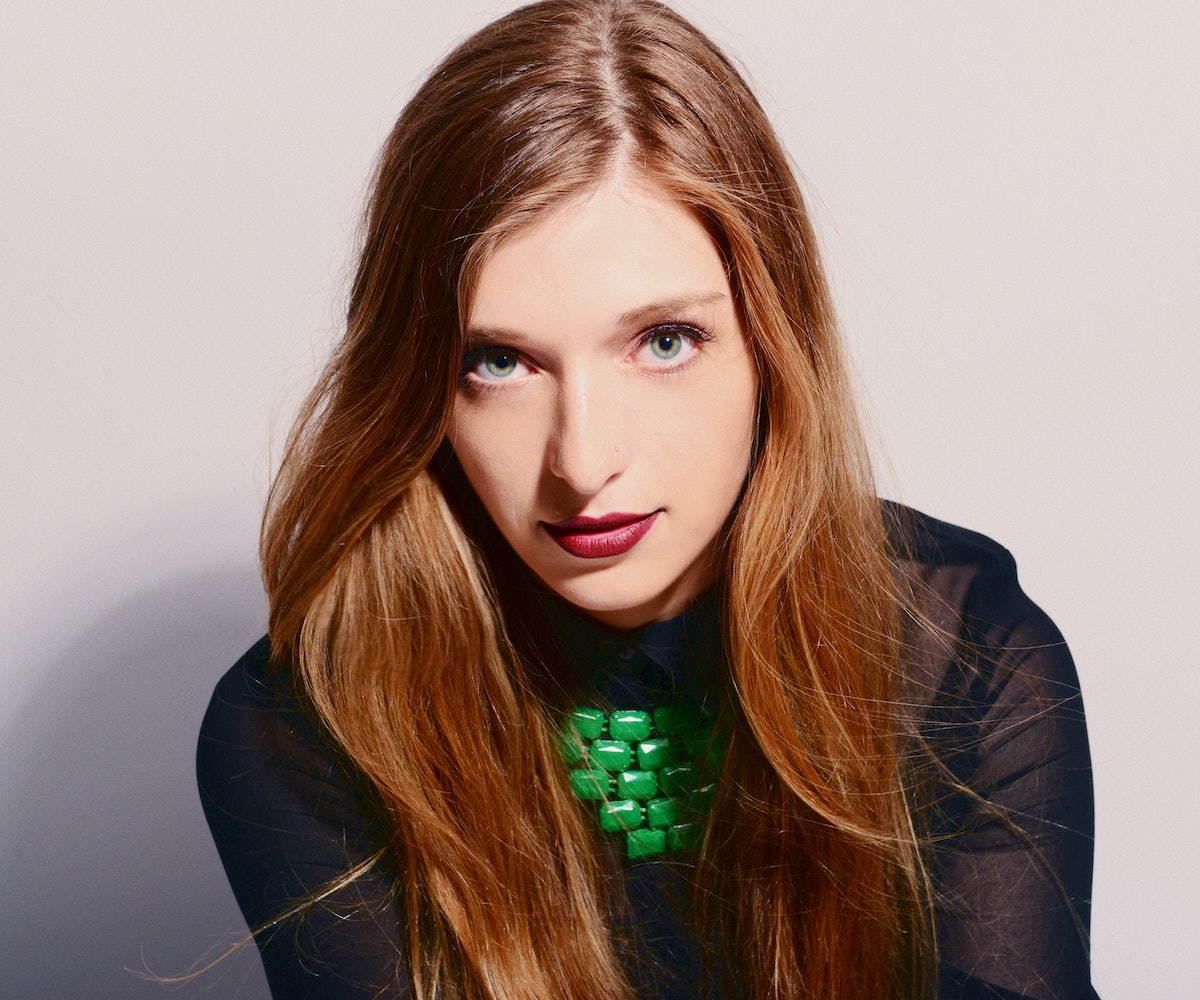 When I call VÉRITÉ for our interview, I'm a little thrown off guard. It's the 24-year-old's second interview ever and when she answers the phone, she introduces herself by her given name. "I feel like it’s weird to introduce myself as VÉRITÉ," she says. After a brief moment of contemplation, she matter-of-factly concludes, "It feels weird." Yet, despite how unnatural this feels, she insists on guarding some aspects of her identity, asking me to keep both her name and the Brooklyn neighborhood she lives in private.

"I think the best part about it for me is that there’s not a lot of information about me out there. I’m kind of an introvert for the most part, so I like that. So people's reactions really aren’t to me, it’s to the music."

It's a refreshing stance for a 24-year-old to take, but it seems to be working. Almost immediately after she released her debut single "Strange Enough" early last month, the indie blogosphere was more than buzzing. Yet despite comparisons to Ellie Goulding, and Zella Day, the synth pop crooner has a sound all her own, with layers of lethargic grainy vocals and energizing guitar rifts. Today marks the release of her second single, "Weekend," an unbelievably sweet song in both its intentions and execution. Listen and download the song below, but before you do, read the rest of our interview with the emerging synth pop artist.

When did you decide to pursue music?

I was always like a super musical child. I started playing little shows when I was like 8 or 9 and then eventually I was like in an all-girl pop-punk cover band that lasted a short while. And I started writing probably when I was like 16 or 17. I was always in bands, or playing keys and I didn’t do anything for a long time and I think nothing really wound up feeling right, you know?

When I first started writing for this project, I had met my producer, Elliot Jacobson. He had randomly sent me a message on Twitter and he was like “Hey, you wanna write?” I love Twitter. It’s very instrumental in connecting me with a lot of really great people.

So, I feel like once we started writing for this project, everything sort of made sense, you know? I totally started to understand what I wanted to say, where I wanted to go, and the identity really formed.

What songs did you cover in your pop-punk cover band?

Oh, we were really all over the place. There was The Cranberries, the 4 Non Blondes...The Donnas were a really big deal to me...Green Day, Nirvana, and we tried some Led Zeppelin and some Deathrow and we probably butchered them.

Can you just tell us about how this new project came about?

The message on Twitter was really the beginning. I had met [Jacobson] once before, like years earlier, and so it was really random. And our whole writing relationship is based on email. He was actually on tour when we started. So the first six months, we actually didn’t really know each other. Like we would just send email ideas back and forth. And so I had sent an idea for a chorus and we would kind of build songs and he would just send me a beat and I would write over that. I think that how the sound would up developing is that we really just let it develop naturally. We had no intention of making pop music or any sort of music. It was really like, “Oh, I like this. Let’s run with this.” Or, “I like this sound, let’s go with that.” Or, “this chorus feels really good” and kind of building the songs up organically. And through that obviously, you know, the songs were in cohesion because there’s only two people writing that are super focused. We would send each other page long emails of different ideas and once we got halfway through—we weren’t even making an album. And then we got halfway through, we were like “we should finish this” and so we kind of then started giving ourselves goals and like we are going to have this done by this week and this done by this week and then kind of prepping things to release. And then yeah, it just kind of wrapped.

So you were working remotely for the most part? Are you guys still doing that now?

Well, eventually we met, which was horribly awkward. For me it was awkward, because I’m the one that’s writing the melody and lyrics and so I had felt like I had poured all of this out and I barely knew him. But now our writing relationship is the same. We still only write via email, but we hang out all the time. So, it’s funny because we would hang out and now I know him really well. We will still talk about the tracks that we’re writing and then we will email each other about them later. So it’s kind of funny like that. So the process remains the same.

You mentioned your sound kind of developed by what you guys had naturally been drawn to. How would you categorize your sound as a whole now?

I mean it’s definitely alternative pop. Hopefully like, I don’t know, driving slightly-overemotional, like alternative pop. Not a very concise answer, but you get it. I think it sums it up.

Have you noticed any pretty blatant or even subtle musical influences in your own music?

Yeah, I think when I was writing this, I was listening to things that like probably subliminally influenced, but I don’t think you would necessarily hear it in the music, I listen to a lot of Drake and a lot of hip hop. I was also listening to like a lot of James Blake and so I feel like some of those sounds probably got pulled in and a lot of more ambient R&B. And then, I think I wound up taking looks at a lot of other female artists because I had never, a female pop artist, just out of curiosity, been like, “Oh, I’m doing this project and we’re working really hard. What else is out there, what else is other people doing that are in a similar vain.” But I think I try to really not let them influence me too much, because I definitely wanted to continue carving out my own lane with the sound and the music. Yeah that’s why I listen to a lot of hip hop.

So who are you listening to at the moment? Who are you currently obsessed with?

I had this answer planned and then it always goes away. Phantogram, always obsessed. I haven’t listened to the whole Sia album yet, but I will be obsessed with that. Twin Shadow, I definitely just got into their new album. Always James Blake. Always Drake. Alt-J. I’m a huge BANKS fan. I feel like she’s super cool. Who else?...

I listen to music mood-based and so if a song is too down, and I’m feeling too up, I gotta change the channel.

Your music has really been blowing up.

The most flattering part of everyone’s overwhelmingly positive response is the fact that people just love the song and are resonating with the lyrics and how it sung and all of these things and it’s the most important part, you know, we can have pretty pictures and we can do all of that, but I feel like the music is there. And yeah, it’s been insane. People are just like, people are as excited as I am—and I’m so excited—probably even more excited sometimes. You know? And that’s really encouraging. It makes me wanna release more music tomorrow.

Do you want to tell us a little bit about your new single, "Weekend"?

“Weekend” is like, you know, it’s funny. I’ll tell you how I wrote it. It’s the most upbeat song on the EP and has these driving drums. My producer is also a drummer so it’s super percussive and you know, "We can fall in love for the weekend." And it sounds so positive. And underlying it’s kind of like this really heartbreakingly nostalgic story for me. It’s really like a snapshot of a moment in time for me. And so the song to me is like very still and slow moving, even though there’s like all of this percussion around it. I was sitting one day trying to write and it really wasn’t happening so I was watching Orange is the New Black. I did the Netflix series from beginning to end in one day like a creepy person. I feel like I’m not alone in that.

But it was one of those things, I would take breaks in between the episodes like, “Alright, I’m going to write this now, I’m going to write this now,” since I was putting it off. And I sat down in between one episode and wrote the whole song and it was just kind of done. The chorus, the first verse in the chorus is unchanged from that. So there’s definitely like it was just kind of a real moment of inspiration and it just kind of hit. And it stayed. And so I like moments like that. ]

Would you say that it’s in any way influenced by Orange is the New Black, or did you just happen to be watching it?

Oh not at all. No. Television is like my zone out. Like some people go running, I just like, “I’ll watch television,” and it’ll just take me out of my mind.

So you said that the tracks are quite still, amongst all the percussion. Do you use a lot of juxtaposition like that in your music, or does it just happen to be for that song?

Probably for a lot of it. I make my best attempt to be really honest and all of the music winds up being written through my perspective or about myself or about certain experiences. Mostly snapshots. Usually I’ll see a picture of something that happened and I kind of go from there and so songs that wind up being more upbeat. I don’t tend to write about falling in love—not that that won’t happen, but it’s just not a topic that winds up coming out of me. So, having this whole week planned, it’s like the same. Like driving, you know. And if you listen to it on the first listen, maybe you won’t catch it. But there’s lots of juxtaposition, I think, with the songs, which I like. And then it leaves moments for when you have that slow song and the meaning is apparent and the feeling is apparent. It’s like then those songs can shine too.

Do you know when your EP will drop?

I don’t have a date. It’ll be sometime late September or early October.

Have you worked on an LP at all?

Sort of. We're always writing and so there’s definitely a lot of songs floating around that will probably eventually form into an LP. But definitely—me and Elliot email each other all the time. It’s kind of crazy. So we’re always, new songs, new melodies, new ideas. So there’s definitely ideas, but nothing set.