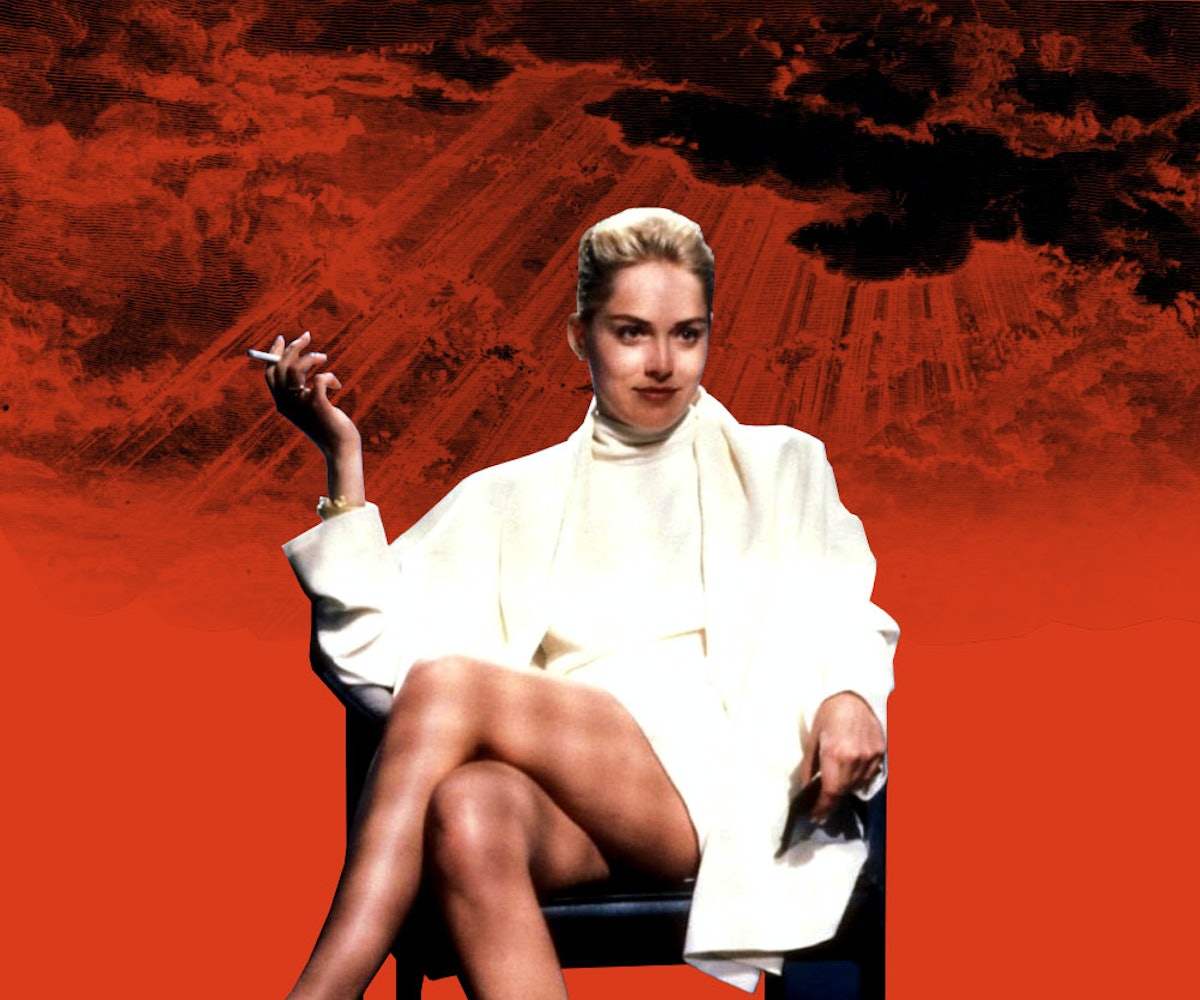 I love bitches. Or, rather, I love the women in film that we have come to call bitches; unrepentant, confident, cunning women. We call them bitches because that’s our word for when a female character behaves anywhere near as badly as the men on screen who have sex and murder and act without emotion—the men we often call anti-heroes. My love of these characters doesn’t come as a surprise, though; in a world where we are often apologetic and attempting to make ourselves smaller, it’s so freeing to watch a woman behave badly.

Despite a lifelong love of both "bitches" and Paul Verhoeven, I managed to avoid watching Basic Instinct until recently. For those of you who are also out of the loop, the 25-year-old film is centered on Catherine Tramell, the primary suspect in the murder of her lover. It was controversial when first released for its perceived misogynistic, homophobic (many characters are bisexual, including Catherine), and otherwise violent and sexually gratuitous content. I’m not here to say that it isn’t offensive or trashy, but it is also 100 percent enjoyable, in part due to its failures, but primarily thanks to Sharon Stone’s iconic portrayal of Catherine, and the way in which she plays all the other characters, notably the police detective Nick Curran, played by Michael Douglas.

Even before watching the film, I knew of Catherine. I had heard of Stone’s infamous leg-uncrossing scene and seen it reimagined in the media over and over again in weaker iterations. I knew that ice blonde hair, the dark eyebrows, the '90s looks. I wasn’t, however, prepared for how much I would love her.

We first meet Catherine on the deck of her stunning San Francisco home, smoking and looking out to sea like a naval widow. She wears an oversized sweater and is stunningly beautiful. Despite being interrogated about the murder of her lover, she’s completely devoid of pathos; in fact, she’s almost smirking. Catherine assumes that Johnny has been murdered before she’s even informed, cementing her guilt in the officer's eyes. They ask her how long she was dating him, but they’ve missed one key detail: “I wasn’t dating him. I was fucking him.”

In a world in which we are so afraid of expressing sexual desire and autonomy, Catherine staked a claim on her sexuality with one sentence. Her perceived promiscuity is not shown through a negative lens, but relayed as fact, with no slant. We’re perhaps even meant to admire her.

Despite being framed as a femme fatale, Catherine’s look is decidedly unvampish. During the infamous interrogation scene, she wears the most iconic outfit of the 20th century—a high-necked white dress and cream coat—but the rest of the time she’s in knitwear and leggings. Her wardrobe is entirely early-'90s chic in a neutral palette of beiges. Her face, near-bare but with dark eyebrows, is often framed with angelic curls. She’s wide-eyed and sweet-looking, if only in an effort to lure her victims into a false sense of security. She is the ultimate femme fatale.

While Catherine is my favorite of cinema's female antagonists, I would be remiss if I didn’t dedicate any time to some of film’s other greatest bitches. There aren’t nearly enough, but the one most comparable to Catherine, for her general demeanor and use of seduction as a bargaining tool, is probably Kathryn Merteuil of Cruel Intentions. Also controversial in its own right, Cruel Intentions received mixed reviews and became a cult hit years later; again, partly due to the ice queen at its heart. Kathryn is a mean, rich girl who loves lounging around in expensive lingerie. She spends her days manipulating poorer people and trying to seduce her own step-brother. She’s reprehensible, relentlessly evil, and full of one-liners. She is lovably terrible. Or is that terribly lovable?

Then, there is Gone Girl’s Amazing Amy Dunne. Loathed by many, both in the fictional world and our own, I was captivated by Amy when I first watched the film. I’m not condoning her murder or general badness, but I can come to understand how it might be appealing to be so conniving. After all, Amy's husband, Nick, stole the best years of her life and her money before cheating on her, and so why shouldn't she use all she had left—her intelligence and powerful friends—to destroy him? I’d disown Amy if she was my sister or friend, but I can empathize.

Plus, I hate Nick—both of them. In Gone Girl and Basic Instinct, my hatred of the Nick character serves to amplify my love of the woman who aims to take him down. In the case of Basic Instinct, Nick is aggressive, unstable, and egotistical. He willingly follows Catherine, sucked in by her allure, watching her dress when she may or may not know he is there. He is boring, where she is magnetic. He jeopardizes his career in an attempt to sleep with Catherine, he taunts and hurts the other characters to get what he wants. He believes that he and Catherine are in love because he is a narcissist, thus making him all the easier to be manipulated by Catherine. After they sleep together, he rhapsodizes about it being the “fuck of the century,” but Catherine slices his masculinity in two with one line: “Did you really think it was so special?”

There are many ways to interpret Basic Instinct, even going so far as to absolve Catherine from guilt for all of her misdeeds. But the thing is, Catherine's guilt ultimately doesn't matter. What matters is that she never expresses regret, never says sorry or repents for what is clearly abhorrent behavior. She manipulates men and women and uses sex to gain power, and doesn't even flinch.

And in a world that rewards men for bad behavior, for being detached and lacking morals, it’s nothing short of cathartic to watch a woman behave the same way and get away with it. President Tramell 2020, anyone?