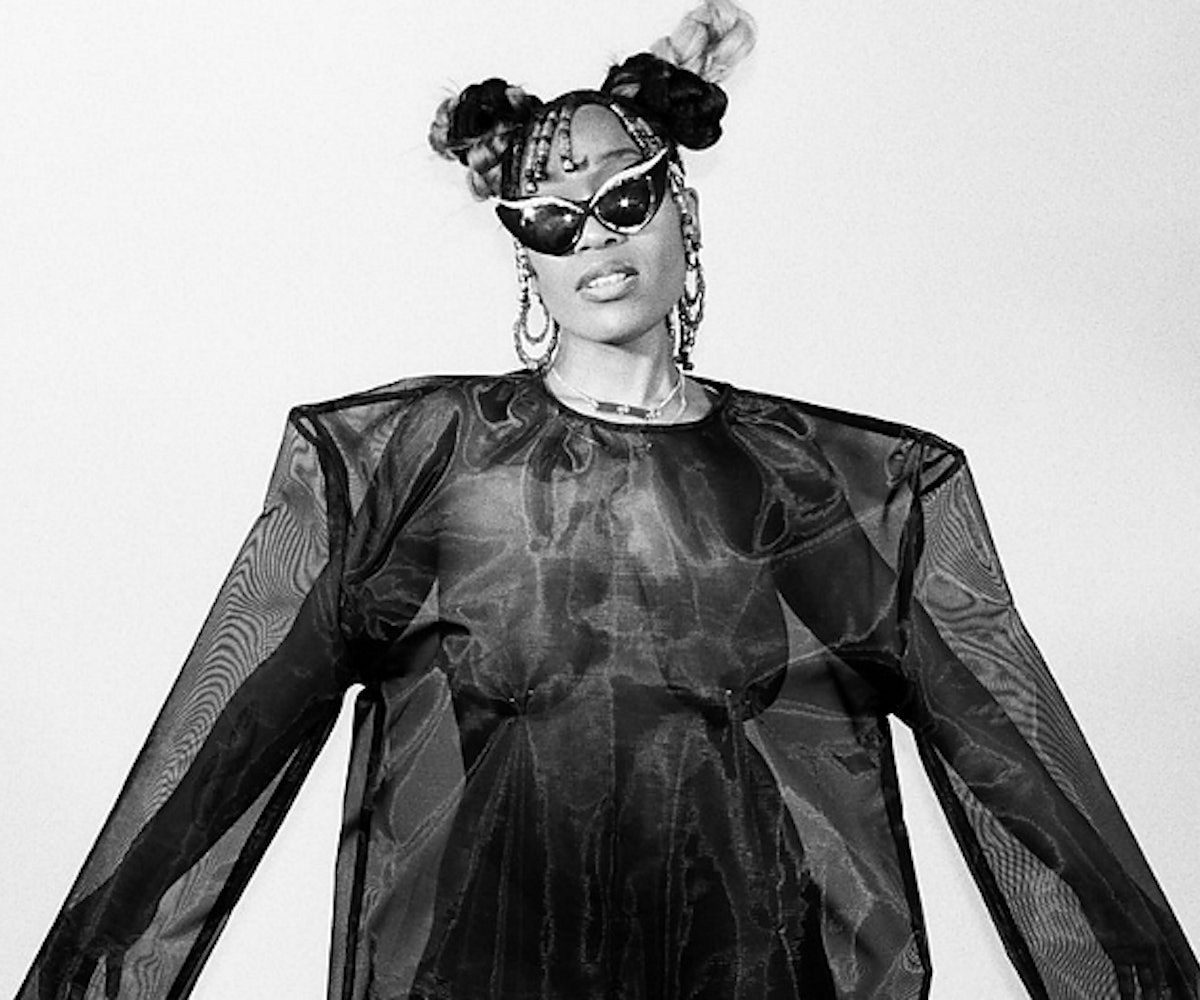 Photo by Eric Johnson/Upstairs at Eric’s

In between jokes about acid and ass sex, BbyMutha continues to shush her son, who is yelling in the background. “Tyler, be quiet, I’m on the phone,” she says, exasperated. But her annoyance flips quickly to amusement once we begin talking about her online persona, which is, unsurprisingly, just as colorful as her IRL demeanor. The Chattanooga rapper is unfiltered and unapologetic about her opinions, even if it sometimes gets her into online drama—mostly with a “bullshit” spate of trolls who like to weaponize her sexual confidence against her, specifically because she's a mother of two sets of twins.

However, BbyMutha isn’t one to let the anonymous haters get her down. From her fascination with the productions of Grimes (“It’s so cute!’) to conservative megachurch pastor Joel Osteen (“He’s a finnesser”), she’s a rapper who—for lack of a better descriptor—defies genre. “I can do whatever the fuck I want,” she emphasizes, letting the dead air hang. “Fuck everything that anybody ever tried to make me think about myself... I'm just going to be myself.” Needless to say, it's motherly advice we want to follow. Read our Q&A with the maverick rapper below.

You’re a pretty polarizing figure online; a lot of trolls come out of the woodwork to engage with you pretty regularly. Where do you think all these trolls come from and why do you think they’re so eager to attack you?

I wish I knew where they they came from, it's so crazy. I'm so used to having like 4,000 or 5,000 followers. That was a lot of followers for me, but everything was intimate... we would have conversations and nobody would really bother me. Now I have 13,000 followers and timelines that I'm getting retweeted on... everybody just has so much shit to say.

I don't want to say I get targeted, but I get probably more [hate] than the average Twitter user. It is because I'm just being vocal on the internet. And I put myself out there, so I have a lot of material for people to use against me. But at the same time since I put so much of myself out there they can't use it against me, because I said it already.

I know you have an album in the works, right? So do you want to tell me a little bit about that project?

My album is great, but it's being held hostage by some suckers who are trying to exploit me and make a big check off of me currently.  I don't even know when I will be able to release it, if I will be able to get it back or what. I don't know what's going on with it.

I guess they saw like, "Oh, this girl is gonna be big, let's see what we can run on her.” I don't have knowledge of how the music industry works and I'm a single mother of four, I can't afford a lawyer, you know? So they were like, "Let's just go offer this girl a contract to make it seem like we're just blow her up." Even though at the time, I had more followers then the two people and the label’s Instagram combined. I don't even know why I thought they could help me when I was already doing so much for myself. They just took advantage of the fact that I just really wanted to get out of my situation—like, move on up and have a better life. They had to take advantage of that.

I feel like that's the struggle of a lot of emerging artists, but that said, I'm sure it's so hard to balance being a mom at the same time, so how do you make that work?

Oh yeah. I don't balance. [I’m still] just trying to figure out how to balance it. They just have to intertwine with each other, because it's like, half of the time, I don't know what I’m doing. Sometimes it's down to the wire. I’ll have a show in the morning and I don't have a babysitter until five minutes before my flight leaves. I don't know, I'm just doing it by myself. I just have to do it.

My dad lives directly next door to me, so he helps me with my older two when I go to shows. But my younger two, I have to find babysitters to keep the two of them together.

Speaking of your dad, I know you mentioned growing up in a religious household. Does that play into your work at all? The album, whenever it’s supposed to come out, is called Prosperity Gospel, right?

I feel like anything that comes from the South is heavily influenced by church because that's just what the South is. I live in the Bible Belt, which is very... holy, holy Baptist. I feel like in some way it does [work its way into my music]. I don't even know how Joel Osteen became a thing for me. I think I was on acid and I was on there internet, and I saw a picture of him and I was like, "Damn, bruh. What is this man's story? What is up with him? Where the fuck he come from? How the fuck is he rich?" And I started watching some of his videos and I was just like, this man is not talking about shit.

I went through the whole internet trying to look for a picture of him not smiling and there are only two pictures of him [not]. He's always smiling that same smile. It's so weird. I was like, he's barely even a real person. He's an android, he's a robot. I don't understand. He literally gets on stage and says things you already know—and people pay for it!

Do you think it's just because people like being reaffirmed in what they already know? People don't want people that disagree with them.

Yeah, but it's like, why do you need to pay for this? You can look in the mirror and say the same thing to yourself if you need to be reaffirmed or ask yourself. Ask your wife, you know what I'm saying? Like, "Baby, tell me I look good." Damn, like why do you have to pay a white man to tell you shit? I don't understand how he's rich. I really don't. He is a finesser.

When did you think you were like, "Fuck this, fuck everyone. I'm not going to be a ‘follower’?”

After I had my second set of twins. That was kind [of when I was like], “I can do whatever the fuck I want. Fuck everything that anybody ever tried to make me think about myself... I'm just going to be myself.”

So final question, I'm also curious what draws you to glossy pop like Grimes and Charli XCX. I know you’ve rapped over them before, and to be honest, I feel like a great collaboration could be in the works.