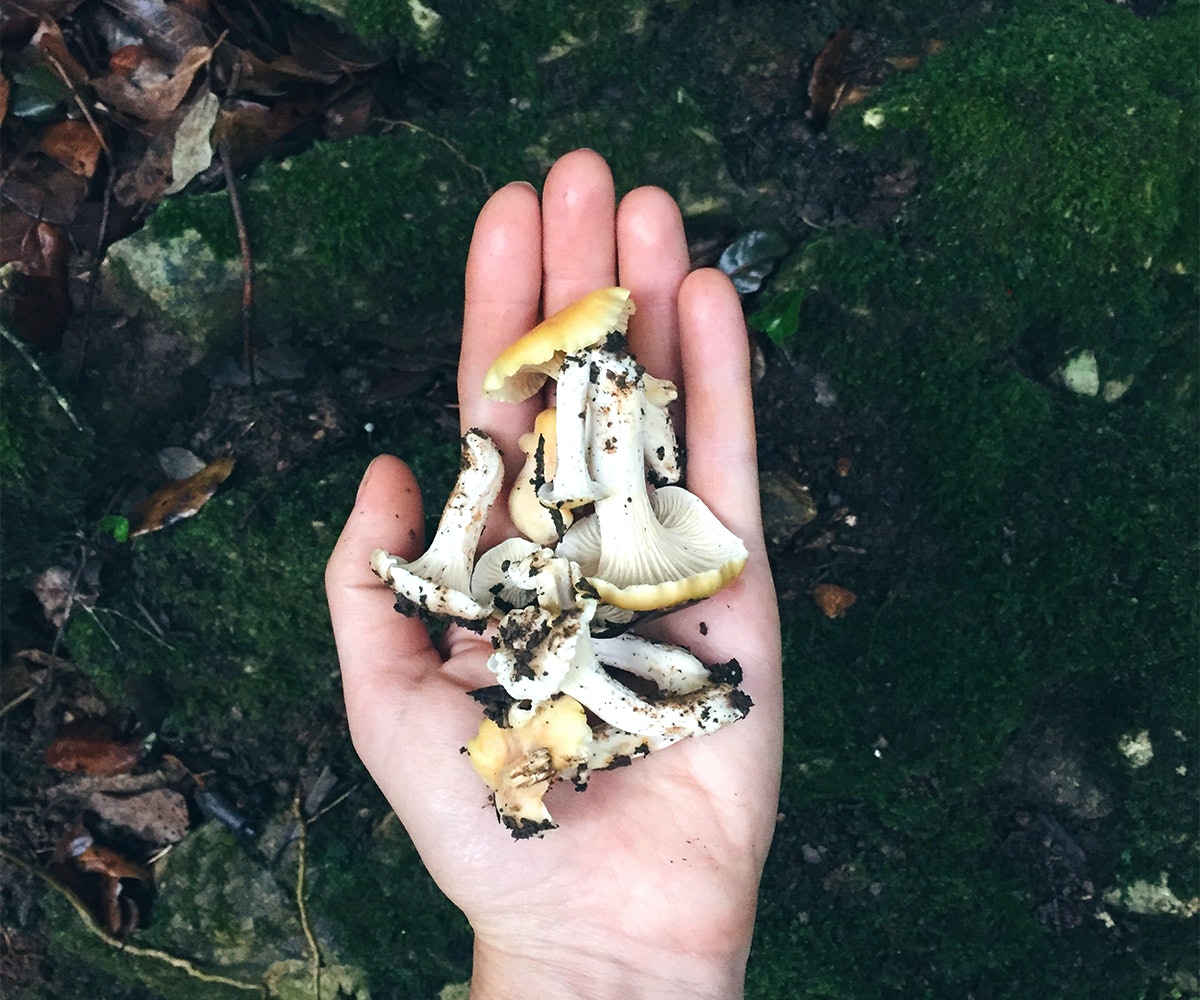 A group of friends and I battled thorn bushes, our bare arms weed-whacked in the woods behind the farm we work on in Italy. We hunted for porcini in a forest filled with the kind of pricker bushes that warn wanderers to turn around before they stumble upon an evil witch. “Holy fuck, fuck yes!” someone exclaimed. We all turned alert toward the voice. “So many chanterelles!” We galloped to our friend, who is now half woman-half blackberry bush. A village of orange-roofed mushrooms were nestled under a bed of thorns, but she dove in without hesitation because the adrenaline of discovering food in the forest negates pain—especially when they're chanterelles.

While you’re out in the woods this fall, you may be distracted by the leaves above, but choose to glance down at the path below, and you’ll get to play hide-and-seek with forest fungi. Treasures lay beneath the foliage.

There is no pirate map that will lead you to the chanterelles. And you won’t find an X that marks the spot of porcini. Mushroom-hunting requires knowledge, research, and the love of uncovering things.

It may seem overwhelming to start because woods are big and certain mushrooms only like particular trees, but we know a fungi goddess from Mill Valley, California, who can break down the beginnings of fungi foraging. Read on, and you too can jump into thorn bushes to experience the liberation of shopping at the greatest natural market in the world: the woods.

Olivia Miller, mycology enthusiast and our guide, spots a white-capped mushroom peeking from a pile of leaves half a football field away. As if pushed by a powerful gust of wind, she takes off galloping sideways on a steep slope to what she calls a “fairy circle.” This enchanting term is what happens when the underground epicenter of fungus roots and grows out into a perfect circle where mushrooms fruit at the edge. The specimen wasn’t anything to eat, but the magic of nature was something to marvel at.

The cool thing about getting into mushroom hunting is that you don’t only have to be hungry. Miller mentions a multitude of avenues that lead to hunting, from a scientific and naturalist standpoint to medicinal interests and nutrition. And because “mushrooms are adorable.”

Step one, Miller instructs, “is to pick everything.” The reality is that you won’t exit the woods with a porcini that’ll rake in dolla, dolla billz. “Mushrooms are little sneaky bastards,” she says. Go into the woods picking everything that interests you. This leads seamlessly into step two: educate yourself. Before shoving anything in your mouth (tip: don’t), Miller recommends acquiring Mushrooms Demystified by David Arora, which is regarded as a hunting bible and harbors an “incredible key” inside that will help with identification and family classification. Grab those mushrooms you just picked and key them out. Figure out what you’re handling; this will familiarize you with the multitudes of genus and species.

Set out with a friend who has hunted before or look for your local mycological club and attend a meeting. You’ll learn how to identify trees and differentiate soils, which, Miller notes, is key in tracking where fungi might be off being their little sneaky selves.

Okay, this is tricky to lock down because every region has a different eco-system. But don’t worry because Miller has bi-coastal foraging experience in both northern California and upstate New York. The East Coast is treated to reishi and chaga mushrooms during spring and summer, while the West Coast enjoys an extended hunting season through fall and winter.

Mushrooms like rain. Miller’s hunting forecast is, “after it rains two inches, wait two weeks.” Mushrooms don’t just pop up the day after it rains. They need time to grow and sprout. You’ll get the most mushrooms at the right time of year, with the right amount of precipitation.

Some mushrooms are keen to specific trees. An oyster mushroom, for example, loves some good decomposing wood. Your guidebook, or friend, or club you joined will be crucial in helping you assess your local environment which will clue you into where the mushrooms are hiding.

The peaceful plus of mushroom foraging is that no weapons are necessary. Competitive hunters may sport camouflage to keep their trekking as disguised as possible, but you can wear neon orange if you’d like. You’ll want a basket, like these fair-trade ones from Fungi Perfecti, or a paper sandwich bag to tote your harvest in. Also a genius organizer, Miller suggests getting a bead storage container to keep different varieties separate for later identification.

You’ll find both edible and toxic mushrooms on your hunt. Don’t pop anything into your mouth. But feel free to pick everything that piques interest. “You can handle anything—smell it, hold it,” Miller encourages. “Even picking non-edibles expands your knowledge of what an edible is.” You’ll learn family names and get a clue into the characteristics of what is best to admire from a scientific standpoint and what is safe to chop into a stir-fry.

Picking mushrooms—even ones you won’t eat—is not a waste. In Italy, the law says to collect mushrooms in a basket with holes so that the mushroom's spores can spread as you continue to trek. So pluck and educate yourself.

You can get closer to identification by looking underneath the mushroom’s cap. You’ll find gills, pores, teeth, or veins. These characteristics will help determine what exactly is growing around you and if you can or can’t consume it.

Always triple-check with trusted resources and your specific club before eating a mushroom you presume is edible. With that said, there are what Miller calls “foolproof mushrooms”:

Chicken of the woods has a bright orange flesh and is found at the trunks of trees. Miller swears it makes one hell of a chicken taco because when cooked, “it literally tastes like white meat.” But beware, while it’s safe to consume on the East Coast, it’s toxic on the West Coast due to its growing habit on eucalyptus trees.

Reishi mushrooms carry medicinal properties that can be utilized as a line of defense against germs hating on the immune system.

Morels are common in California and popular to cook with. On the West Coast, Miller notes that these guys “grow in old forest fire zones” and are known as “burn morels.” Beware the false morel, an evil twin that is potentially deadly.

Oyster mushrooms like to grow on and around decomposed wood.

Chanterelles have a faux gill, meaning the underside of their cap looks more like veins. While these are safe, they also have an evil twin called the “Jack-O-Lantern.”

Don’t be overwhelmed by all the posers. Our mushroom goddess eases fear by instilling confidence in our eventual identification skills. “It’s similar to looking at a grape vine versus ivy,” Miller says, “you learn what it's supposed to look like.”

Porcini grow under pine needles, providing the thrill of getting on your knees and patting around the earth for mounds called “mushrumps.”

Matsutake mushrooms carry a hint of cinnamon, “but also dirty socks,” Miller notes. Regardless of hints of laundry, she promises they’re great in Asian stir-fry.

Even if these seem obvious, I’ll tell you a second time and then a third time: TRIPLE-check to make sure you’re positive before eating anything. Get yourself an official and ultra-reliable guide.

You can have your toxicity in varying degrees. “First,” Miller clarifies, “you can just be allergic to mushrooms.” So, basically, even if you have a confirmed chanterelle, your stomach may be sensitive to it and therefore gastronomically reject it while other people can easily digest it.

From there, poison can range from upset stomachs to, you know, death. So don’t fuck around with mushrooms.

Let’s get Latin for a second. In the Amanita genus, there are a number of poisonous mushrooms. Amanita phalloides, or the “Death Cap,” is white with a domed cap and is a killer. Amanita muscaria, or “Fly Agaric,” is your classic fairytale mushroom—red with enchanting white dots. Draw a picture of it, but do not eat it. It can make you sick and possibly lead to death.

Put down the orange or red boletes that stain blue. You’ll find the underside of the cap to have many pores that combine to resemble a sponge. Refrain from sinking your teeth into it even though it looks inviting.

Now that you’ve TRIPLED-checked your mushrooms are edible (right?!), it’s time to finally enjoy them.

Keep your haul in a paper bag in the fridge because while “you don’t want them to sweat,” keeping them this way allows them to “stay moist while also allowing them to breathe.” You know they’ve gone bad when they’re slimy and stinky. If they smell close to the aroma of when you picked them, they’re still good. But it’s ideal to pick and cook immediately.

Don’t eat them raw! “Mushrooms contain chitin, which is what bug shells are made out of,” Miller says. So they’re basically more easily digested when cooked.

Stir chanterelles into sauces that are so good that cheese would hurt the dish. Turn them into tinctures to cure winter ails. Bake atop pizzas. There are so many ways to incorporate the treasure you found onto your dinner table. Here’s just one idea:

Place the meat in an oven-safe pan. Finely chop together the sage and garlic and put in a bowl with salt and pepper; mix well. Rub this mixture over the meat, drizzling it with the olive oil at the same time, coating the entire roast very well.

Put the roast in the oven and cook for 20 minutes, turning two or three times, helping the meat to develop a browned crust. Add two cups of white wine and turn down the oven to medium heat (150°C/300°F). Leave until cooked through all the way, around 25 minutes, again turning regularly. A slight pink center is fine as it means the meat will be more tender. Set aside to rest until slightly cooled.

Cut into very thin slices and lay the pieces out evenly over a large serving platter. Mix the mushroom sauce (see below) to the pan juices and then spread it over the roast beef.

Now go forth into the forest. Fungi foraging is complex, there is a lot to learn, but with these basics we hope you expand your roots from this epicenter, find your group, and let your own fairy circle flower.