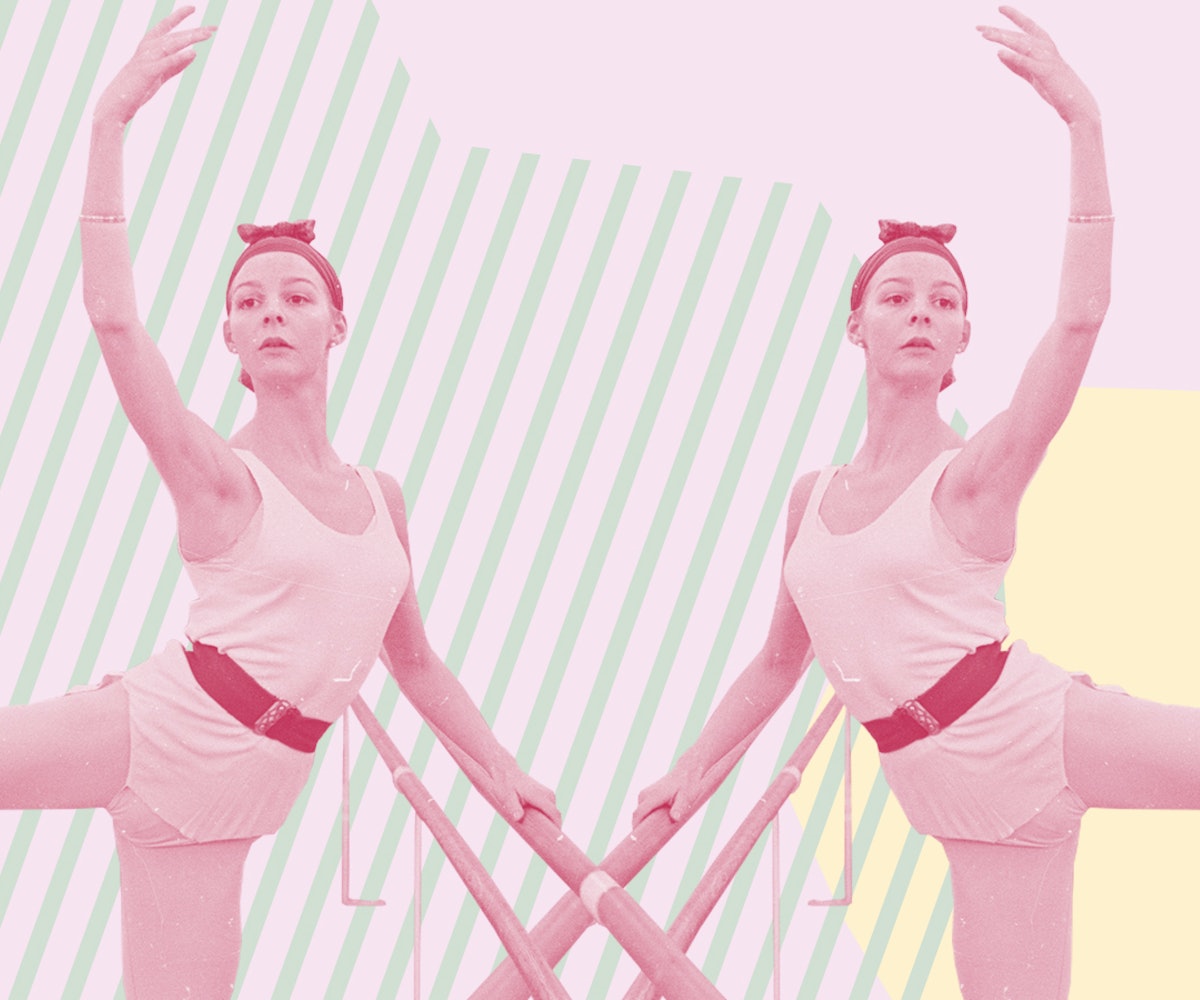 Barre class can sound intimidating; if you’re not stressed about being surrounded by insanely tall, poised ballerina-types, you’re nervous about the intense calf burn that you’ve been warned about. But if you want chiseled calves and toned quads, plus an excuse to sport a ballet bun and a wrap sweater with leggings, barre class might just be the answer to your muscular (and sartorial) needs.

If you’re planning on hitting up a local class, there are a few things to keep in mind to get prepped so that you can pirouette in like you own the place. First, don't worry: Barre is not nearly as tough as it sounds. Think of the “barre” as just another prop, like a step or a set of dumbbells. "A barre workout consists of low-impact, controlled strength exercises, many of which utilize a ballet barre for support,” explains Carrie Dorr, the founder and chief barre officer for Pure Barre, the barre class behemoth with locations nationwide. Pure Barre opened in 2001, and, as Dorr rightly says, it was a “sleeping giant.” In recent years, barre classes popped up in nearly every gym as dance-inspired workouts rise in popularity. Maybe it’s because they’re just more fun than your standard HIIT class, maybe it’s because CrossFit’s competitive nature makes it less enjoyable for those who use exercise as a time to play. And hey, maybe it’s because most of us can remember a time when we wanted to grow up to become ballerinas. Whatever the reason, pull out your tutu and start twirling. (Well, save the twirling for home. Barre class isn't really about that.)

You Didn’t Need to Take Ballet Growing Up

"No dance experience is required!” says Dorr. You won’t be forced into the ballet positions (or, at least, when the instructor tells you to do the first position, she then demonstrates what that is), so if you were more soccer and softball or science club than Swan Lake growing up, you’re still going to be just fine. "If you can hold on to a ballet barre and are willing to work hard, you can do it,” Dorr adds.

If you show up in shorts and a tank top, no one will judge. But Dorr says the fun part about barre classes is to embrace the ballet-inspired fashion (and have yet another reason to remind the world that #LeggingsArePants). Steal a page from Dorr's style book and rock a pair of leggings that you feel good in. “My favorite are KORAL,” she says. Pair that with a set of tops that would have looked just right in Center Stage or “a light-medium support bra, tank, an over-piece—long sleeve or mesh—and socks with sticky bottoms or a light-support/barefoot shoe.” Whatever you end up wearing, though, Dorr says comfort is key so you can focus on the movement, not on the Spandex digging into just the wrong spot. She also adds that while no one will boot you out for wearing shorts, leggings are the standard, so if you’re torn between what to wear, opt to cover your gams.

It’s tempting to stay on your toes until your calves are burning to the point where you wonder how you’ll make it down the stairs once class is over. Don’t get to that point. Let yourself take flat-footed breaks if you’re in a class that’s particularly calf-heavy, and shake them out when needed. No one is judging. Beyond that, Dorr says to make sure you’re participating in the warm-up and the cool-down and staying hydrated throughout the class. Hydration tip: You don’t need a sports drink for an hour-long class, but if you do notice you cramp a lot, consider adding an electrolyte tablet like nuun, or even just a pinch of sea salt and a squirt of lime, to your water. If you’re a little sore the next day, that’s to be expected, but if you can barely get out of bed in the morning, you pushed too hard. Don’t forget: Standing on your toes with your calves flexed is a strength-training move, not a casual cardio position.

Don’t Try to Learn at Home

Rather than running through the positions in front of a bedroom mirror, the best bang for your buck is to keep barre class exercises reserved for barre class and slip in some cardio cross-training at home instead. Run, walk, hit the elliptical, ride a bike: The more you can improve your aerobic capacity, the easier barre will become. "The best way to get started is to really just come in and try it!” Dorr says. "The positions and movements are basic, though this doesn’t mean easy, and the teachers are trained and they are there to help you have a great experience.” You’re better off trying moves in class and getting feedback from the teacher versus trying it at home and learning wrong.

When You Hit the Wall, Chill

In yoga, the instructors always offer the option of sinking into Child’s Pose when moves get too intense. Same goes for barre classes: "It’s completely different for each person; you really have to listen to your own body,” Dorr says. "You can keep going and not work as deep in a position or take a quick break to stretch and grab a sip of water, regain composure, and jump back in.” To save face, if you’re embarrassed about collapsing in a heap, leave the room to hit the bathroom (and collapse onto the toilet) or casually walk over to your water bottle. (And chances are, everyone else is just as busy avoiding falling over, so they probably aren’t even noticing you!)

Sure, you’ll gain muscle and torch fat while gaining flexibility if you do barre on the regular, but whether you’re young, old, a runner, a couch potato, a former body builder, there isn’t one type of person who goes to these classes, so you won’t stand out or feel awkward. Dorr says the beauty of barre is that everyone can do it; the body-weight style of strength training is ideal for both seasoned athletes and total newbies alike.

If you’ve tried barre in the past only to give up after one class, Dorr really encourages new students to have a little patience with the process. "Barre is like any other new sport or discipline—there is a learning curve, so give it some time!” she says. "The more you do it, the better you understand it, the stronger you become, and the more results you will achieve.” And those sculpted calves will look really good in wedge sandals this summer.