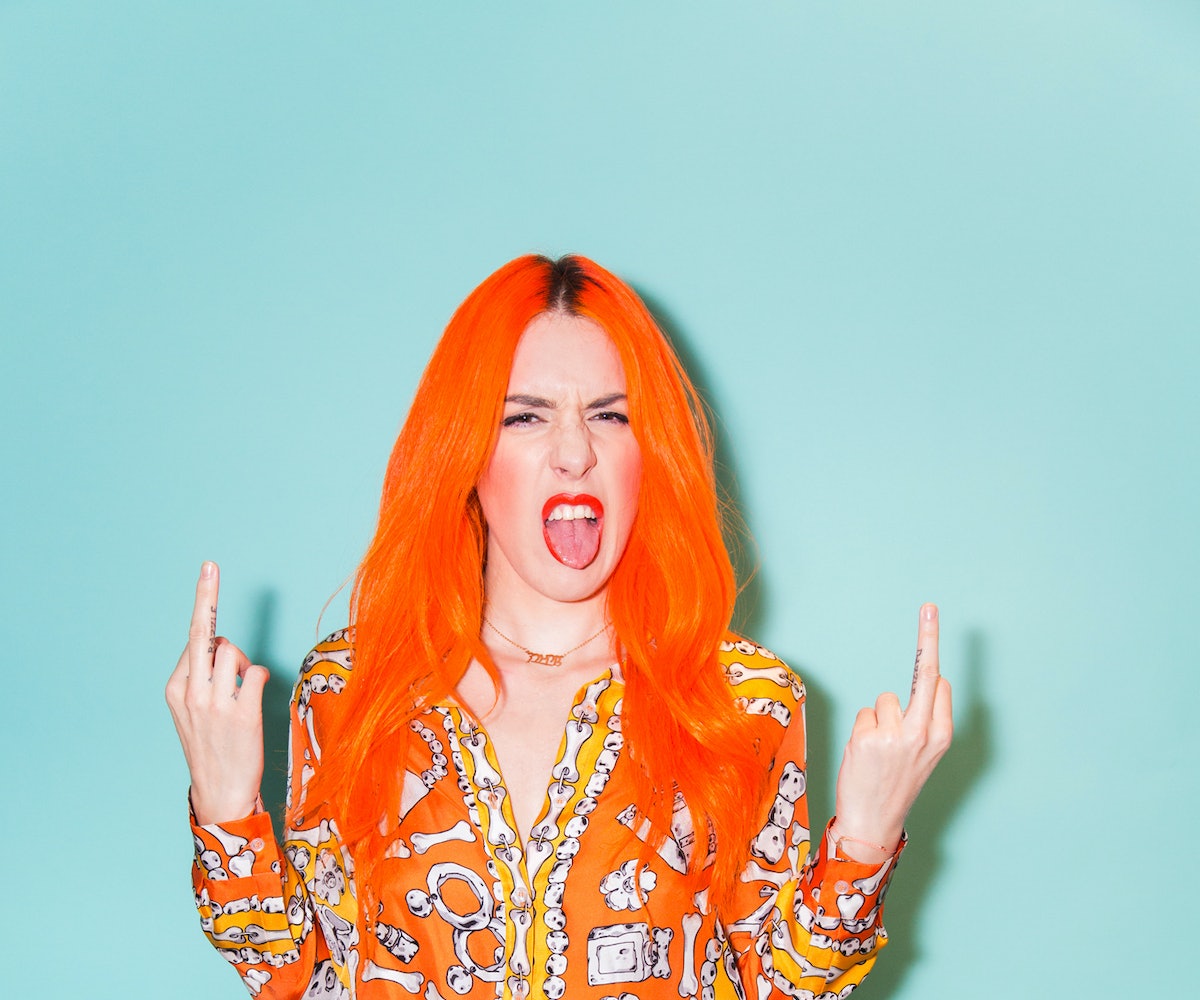 A dozen of my designer friends were at a birthday bash at the Guggenheim last night. I know because I saw it on Instagram; my invite must have gotten lost in the mail. Hi, my name is Kerin, and I’m an uncool girl working in fashion.

Like many professional industries, fashion is a lot like the high school cafeteria in Mean Girls, and let’s just say that I have never been invited to sit with The Plastics. My work may adorn the faces of the most popular women on the planet (Bey, Rih, and Gaga to name but a few), but nobody is asking me to wear pink on Tuesday. I definitely wouldn’t have found out about Lindsay Lohan’s house party until math class the next morning.

This isn't exactly a new experience for me, though: I’ve never really fit in. In high school, I usually ate lunch with some friends in the choir room because I was (and still am) a weird girl. Being slightly off center and creative is why I have this career in the first place. And to be clear, I didn’t get into fashion to feel cool. For me, fashion has always been a way of confronting the status quo, whether it’s through my personal style or my A-Morir pieces. I live to be challenging, provocative, and suggestive. My inspiration is often a big FUCK YOU response to a current trend or cultural issue, and typically that’s not such a popular move. I’m not crafting little black dresses or It Bags by any means.

To me, mainstream has always been a synonym for boring, so I create work that is the opposite. And I’m stoked! If I wanted to make an LBD, literally or metaphorically, I’d be doing that instead. But I’m still my own boss, without anyone to offer encouragement or tell me that I’m doing a good job. It’s hard to remind yourself that your contribution matters when the cool table of your industry doesn’t ask you to sit with them either.

I remember the first time the fashion world made me feel uncool. It was my 21st birthday (2003!), and I had scored an internship interview at Vogue, confidently walking into their office with perfect grades, a great resume, and a connection through my NYU advisor. I wore an asymmetrical button-down pinstripe shirt, khaki bondage pants, my nicest heels, and my (10 years too early) pastel rainbow hair pulled into a sleek ponytail. In my mind, this was the most professional look I had at the time, and I didn’t even get past the waiting room. An assistant came out to say my interviewer (and fellow NYU alum) would fetch me in 10 minutes; 20 minutes later the same assistant informed me that all the intern positions had been filled and I could go home. I felt like I had rushed a sorority and gotten turned away at the door. It didn’t take an honors student to figure out the assistant’s preemptive moves—“this girl’s not going to fit in here”—but I convinced myself it was okay. It wasn’t personal, and I’d still be getting cake later (it was my birthday after all). I went on to intern at three other magazines throughout college, but my adventures in uncool didn’t stop at graduation.

As a professional adult, nothing makes me feel quite so excluded as Fashion Week. Who knew cafeteria seating was just a rehearsal for runway shows? For those who haven’t been, all the cool kids get chairs in the front, and if you show up sans VIP, you might score some standing room behind them. (I’m usually surprised to even get an invite in the first place.) Knowing how political seating charts can be when 200 seats need to accommodate 400 people, I’m grateful that I have the opportunity to support my friends at their shows. Getting to see the actualization of your friend’s efforts over the last six months is the absolute best. The worst is when you run into a social acquaintance while you’re all prepping for the season, and before an air kiss goodbye they say, “See you at the show next week? I invited you!” Thankfully I have always known better and email PR for a rejection letter instead of showing up at the door the day of only to be told, “No, you’re not on the list.”

Some of the best advice I received as a young designer came from a duo who’d been in the glamour game for a while. I was venting my frustrations, asking how they dealt with knockoffs, shade, and all the other challenges of being a small, sparkling fish in a big name pond. “Keep your head down and just focus on the work,” one of them responded. That advice has become my mantra and has helped me out daily. It’s a necessary reminder that what I do and why I do it has never been about Instagram followers, party invites, social acceptance, or press mentions. It’s about doing work that feels important, actualizing and preserving my vision, pushing boundaries, and being uncompromising with my design, quality, and craftsmanship. I wake up every day excited to keep my head down and focus on the work. It’s how I got here in the first place.

It’s easy to get caught up feeling like you’re constantly vying for a seat at the popular table, or pledging a sorority that doesn’t even want you as a member. But campuses, like creative industries, are small. There’s a big world out there! This Thanksgiving I spent a full earth rotation on Long Island with my family and some old friends. I hadn’t gotten dressed up in a while, so I wore these crazy light-up Rodarte runway samples from 2011. Nobody cared, and I couldn’t have been happier. My best friend told me she loved my shoes, but when I excitedly listed all their couture details to her, she told me, “I don’t know what any of that means.” However, she was thrilled to hear about my boyfriend and how we were spending the rest of the holidays. My grad school cousins were so excited to share their skin-care routines (Aztec Secret Clay!) and find out about my next column. When I told them I was writing about being an “uncool” fashion girl, they blinked in disbelief and told me I was the coolest person they knew. But it didn’t matter either way. In that moment, I was just Kerin, they were just cousins, and we danced around an iPod in the living room having more fun than I would have had at any museum gala, runway show, or house party at Lindsay’s.