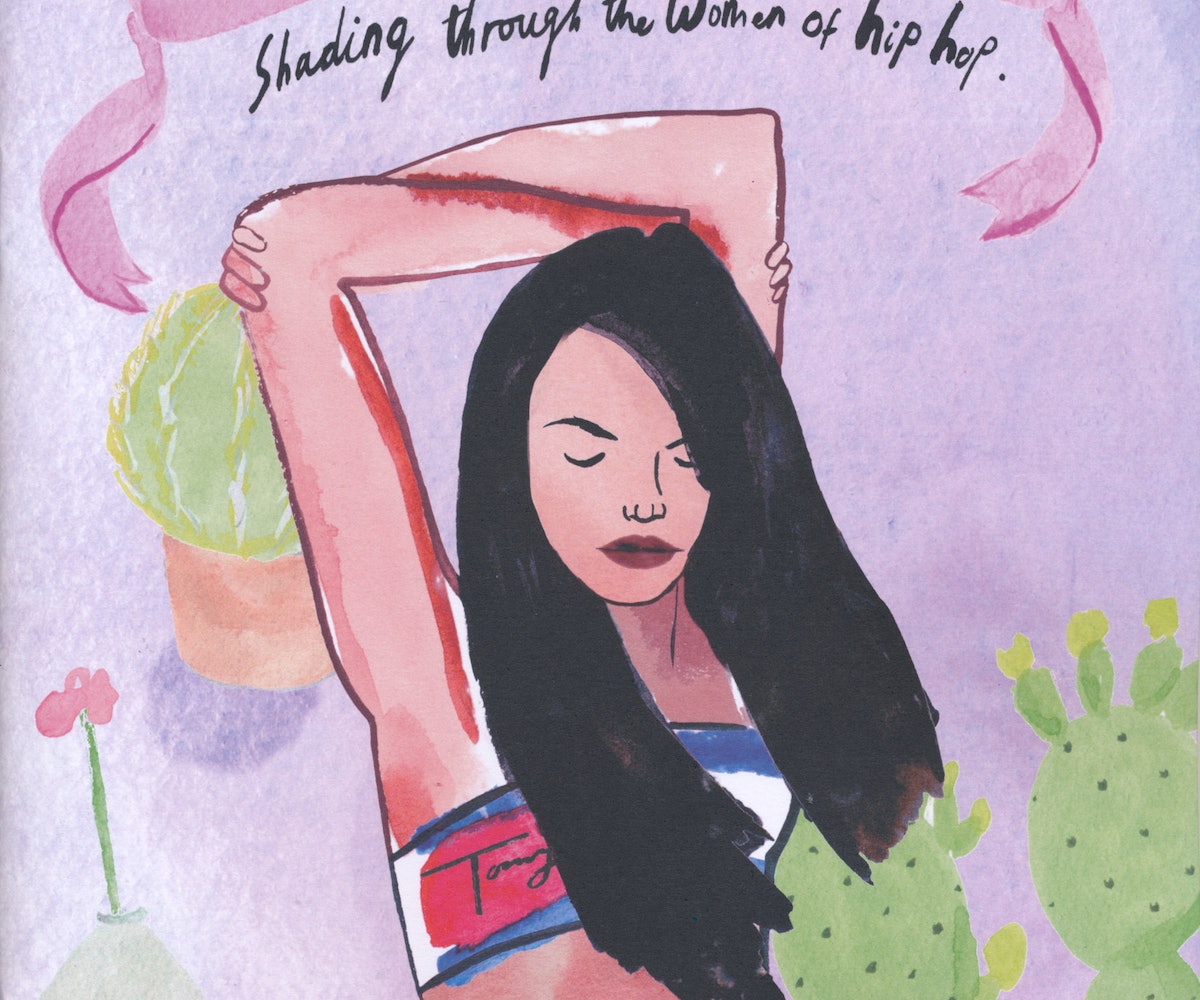 When you find a coloring book of female rappers at Urban Outfitters, you don't do nothing. Because if anything is going to motivate a little Googling it's a DIY illustration of Aaliyah. So obviously after I stumbled across the More Than A Woman coloring book at UO, I had to figure out the geniuses behind it.

Turns out the campany that publishes More Than a Woman is also behind that Bill Murray coloring book (aptly titled Thrill Murray) you've been eyeing, as well as some of the coolest art exhibits in London in the recent past. They're called Belly Kids (best company name ever?) and are the brainchild of UK-born Mike Coley. I exchanged a couple of emails with Coley to get the scoop on how Belly Kids became so cool and what he hopes to do next. And don't forget to pink up your copy of More Than an Woman here after you're done reading. Because the one thing that could make Monday better is a little coloring chill time.

How would you describe Belly Kids to someone not familiar?

It's a real tough one! I've tried and failed so many times. Try convincing your family that it's a smart idea that they store 50 boxes of a Bill Murray coloring book for you when they have no idea who Bill Murray is and know you have no money. Essentially Belly Kids publishes illustrated books, prints, and accessories. We love pizza, pig out on all the usual net culture stuff, and collaborate with a bunch of talented artists when putting on shows and exhibitions. A label which is happy to put it's name to anything exciting, twisted or weird. We're based in London but work with people from all over the world. So hopefully, some sweet day, we can take one of our many East London exhibitions onto somewhere real dreamy like Brooklyn or Tokyo.

What inspired you to start Belly Kids?

The months rolled by after graduating from university and rather than fall into a sweet position at a great company I found myself living with my parents in the countryside of the UK with no prospects whatsoever. It was tough watching the rejection letters pile up. I'd spent my whole life dreaming up ideas only to get scared off and not follow them up. Enough was enough. I swore that the whole miserable cycle was going to come to an end and from then on I'd put all my mad plans into action... So that's how it started really. My film degree became ever more obsolete, I moved to London with some of my best friends and built this bizarro collection of coloring books, sticker annuals, and tantric pizza prints. It's a fluoroscent heap I like to call Belly Kids and it's the best move I ever made!

What's your favorite part of the job?

It definitely has to be connecting with new people and working on projects together. I've been lucky enough to make friendships with people from all over the place and if I had more money I'd spend my time touring around the globe hanging out with them all. Really, who doesn't like meeting people who are passionate about the same stuff as you? If you're an artist, you work in PR, or just want to get involved in some small, slim way then please do get in touch! We can exchange motivational tweets and the occasional dog photo.

How do you find artists?

As I've been saying I personally know a bunch of great illustrators in London, so many radical dudes working away at the moment. Though since Belly Kids released Thrill Murray last August I've been introduced to so many neat artists online. Either I pluck up the courage to mail them or they see Belly Kids on a site and message me. Over the last year I've worked with some amazing illustrators and designers! Our books always find a good mix between illustrators I know in person against those I meet online. It's all about bringing new people together.

What's been the coolest project you've got to work on?

You know, I have this childlike enthusiasm which makes me think that the current project I have going on is by far the best and greatest. Right this second I'm dancing around my room listening to early 2000s WWF wrestling intros. It's not the prettiest sight in the world but I have a huge smile. This happens at the beginning of pretty much of every book or exhibition I work on. The last time I did this habitual dance routine was when I made a coloring book for Urban Outfitters called More Than a Woman. That was a pretty rad thing to work on and it has just come out in the UO stores throughout The USA. Pretty proud of that one go check it out!

Where do you go to get inspired?

I feel very lucky to live In a place where there are so many creative people all around me. No joke there is constant stream of illustrators, bands, designers, venues, and labels teaming up on something or other. It's a really open and positive scene which is arms open to new comers. I found it a giant help in the early days of Belly Kids, it's so easy to collaborate and make fun things happen. Without that culture behind me, it would've been hard to make Belly Kids books! When I'm feeling slightly less social I buzz around sites like Nylon, It's Nice That, Juxtapoz, Fecal Face... There is so much awesome going on in the world, it definitely drives me on. Also drinking Negronis--try them, you'll never go back.

What do you think sets Belly Kids apart?

Even in this small microcosm which is East London there are so many great labels, publishers, and galleries, like Beach London, Ditto Press, KK Outlet and Day Job to name but a few! They all work on some pretty amazing stuff and make this part of London so vibrant. It's hard to ever know what I'm doing differently really! I suppose Belly Kids comes at things with a playfulness. We like to work on projects that demand your involvement in someway: coloring books, sticker books, Ancient Egypt exhibitions, scratch and smell collections. We never take ourselves too seriously and plough into subjects with a keen sense of adventure. I just hope it comes across in our books!

What's your dream for Belly Kids?

First and foremost to keep working on weirdo books forever! We keep plugging away and slowly we're getting the word out there! Since I was young I've always had this dream of running a space which pulls together all my favorite things. To have a store which sells zines, records, comics and books. A place which has myriad of juices and a bunch of small soul food sliders. At the back there will be a studio space where I can work on projects big and small with all my favorite designers. At night we invite bands to come play, we serve locally brewed beer, and play records into the early hours. It has to happen, I've been scouting out possible locations for years now!