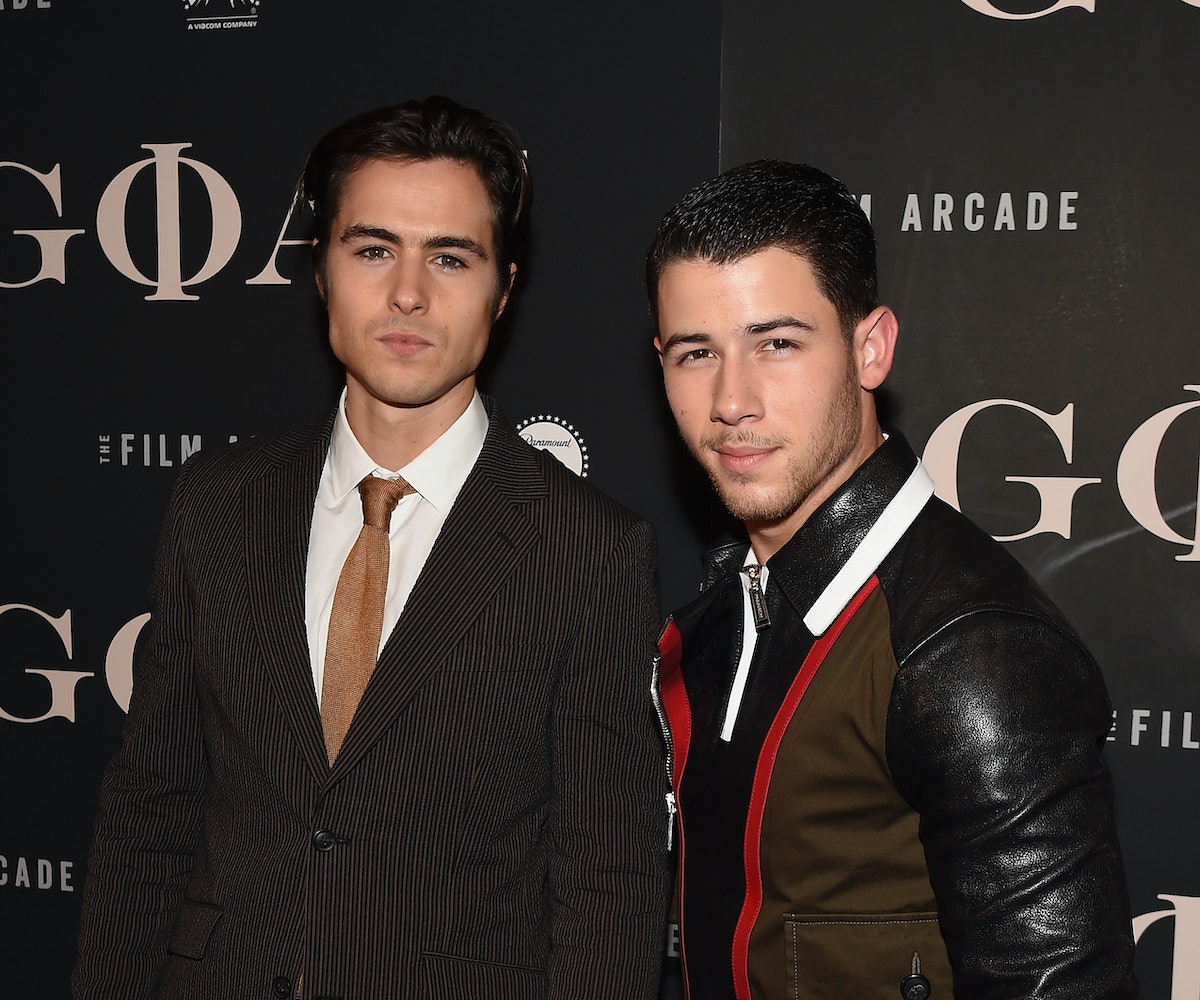 In the world of Phi Sigma Mu, the violent, toxic fraternity that Andrew Neel’s new film GOAT examines, a "goat" is a new recruit, a target of abuse and humiliation. GOAT pulls no punches in depicting the horrors of hazing, but for a film written by the director of Pineapple Express, it’s a surprisingly subtle dissection of the fragility of masculinity. After being beaten, robbed, and humiliated in the summer before college, Brad, played by Ben Schnetzer, is determined to prove he’s not a “pussy” (the insult most commonly lobbed by the film’s bro clique), and attempts to join his brother Brett, played by NickJonas, in Phi Sigma Mu. The results are startling. We caught up with Jonas and Schnetzer earlier this week to talk about shooting some of the movie's more disturbing scenes, violence on campus, and what it means to be a man.

What attracted you guys both to GOAT?Ben Schnetzer: The screenplay, I think, was the first thing that really captivated me. The script was super tight and very compelling. It was like a charged battery; it was packed. And so, that really kind of launched everything, and then I read the book a little bit, met with Andrew [Neel], and I really liked where Andrew was coming from. He's pretty fearless as far as filmmakers go. He's not concerned about pleasing anybody, and that's really exciting.

Nick Jonas: Totally, the screenplay was amazing. I’m drawn to stories that can kind of center around masculinity as a theme and what that looks like today, and then brotherhood as another element is something that's very true and real for me. So, it was an exciting script to get, and then to go through the process of auditioning and hoping that I was going to get it, and finding out I was paired with Ben was amazing. I was a fan of his work from The Book Thief.

Did you both aim to play the characters that you ended up playing or were you torn between Brett and Brad?BS: When I first read it, I just wanted to be in it, so the first meeting I had with Andrew, I was pretty keen on, like, Dixon, Chance, Brett, Brad, whomever. And then when I went into audition for it, I got the scenes maybe four or five days before the audition, and for the first couple of days, I wasn't sure which of the two brothers I was going go in to read for. And then about two or three days before I went in, they were like, "We want you to read for Brad." All the characters in the film were so well fleshed out in the script, it was kind of a, "Hey man, I'll just take whatever."

Nick, how did you feel about being cast as Brett?NJ: I think when I first read it, it was unclear which brother I might play, and then after I read it, they asked me which one I might like to read for. And, I think, because I was in the process of doing another project where I played someone that's probably more like Brad, it was exciting for me to take on a totally different thing. And so, I asked if I could read for Brett, and they had already locked [Schnetzer] in as they let me do that, so it worked out.

Before you started on the filming, were you familiar with the horrific stories of hazing on college campuses?NJ: What I think has been interesting as a whole is once I read this script, and became aware of the memoir and everything, all of these incidents became more apparent to me. The news cycle, specifically about horrific hazing incidents, I think, is very quick, and it's not in the news as long as maybe it should be and in peoples' faces in a way where there will be some kind of positive change. Nothing really has changed from the time this memoir took place to now, and it extends beyond just fraternity culture and hazing within that culture, but even sports teams and some of these horrific sexual assault incidents. It's really tough, and I'm hopeful that this film sheds some light on what can happen when these situations get out of hand.

The hazing scenes themselves are really visceral and horrible. How did you guys prepare for that on a physical and emotional level?BS: Andrew did a great job of setting the scene for those days of filming. He kept the actors playing the pledges and the actors playing the [fraternity] brothers separated from the very beginning of the day. I don't know exactly what he said to the brothers, but to us, he said, "You're not going to know what they're going to do to you. You're going to be uncomfortable physically and psychologically, but we're going to be there to make sure everything is safe. But we're going to just kind of let it roll." We had a safety word just in case, as an actor, you were hurt or you were uncomfortable with something.

Nick, how was it for you, playing one of the brothers, to take part in one of those scenes?NJ: Well, what was kind of disturbing was that I realized that it was easy to go to that place that these young men go to. We were obviously playing make-believe, but even that, this testosterone craziness took over to when we'd call cut, and I'd think about what I just did and be quite disturbed. And, that's the danger of how far these things can go, and hopefully, some will watch this movie and be more aware of that.

Do you feel like you learned a lot making this film about masculinity? BS: I think, what I took away from the film was just kind of reflecting more on my relationship with my own brother, and making that transition from having a literal fraternal relationship with someone as children, as adolescents to being brothers as young men. Nick and I have chatted about this before. Obviously, this film, it's one man's story and one man's experience within a fraternity. Outside of that, I think a lot of good can come from a sense of brotherhood. We're pack animals, and it's a natural thing to want that, to have that feeling to belong. But, you need to know how much it's worth to you. And, you need to know whether what you want to belong to is something that you actually want to belong to.

NJ: I think that it's tough to really sum up all of what masculinity looks like today, but I'm drawn to projects where masculinity's a theme, and the thing that I noticed, which was interesting, was the inability to really show care and love, and it comes out in violence. And, it stems out of the inability to embrace vulnerability and intimacy and all these things, and it comes out in all these sorts of senseless acts. So, I think that the thing I learned about myself was that with the people I value in my life, and specifically the male relationships in my life, whether it be my brothers or our friends, I became more aware of letting them know through words and affirmation that I care to have them in my life. Violence doesn't need to be the way to show care in some sort of weird roundabout way.