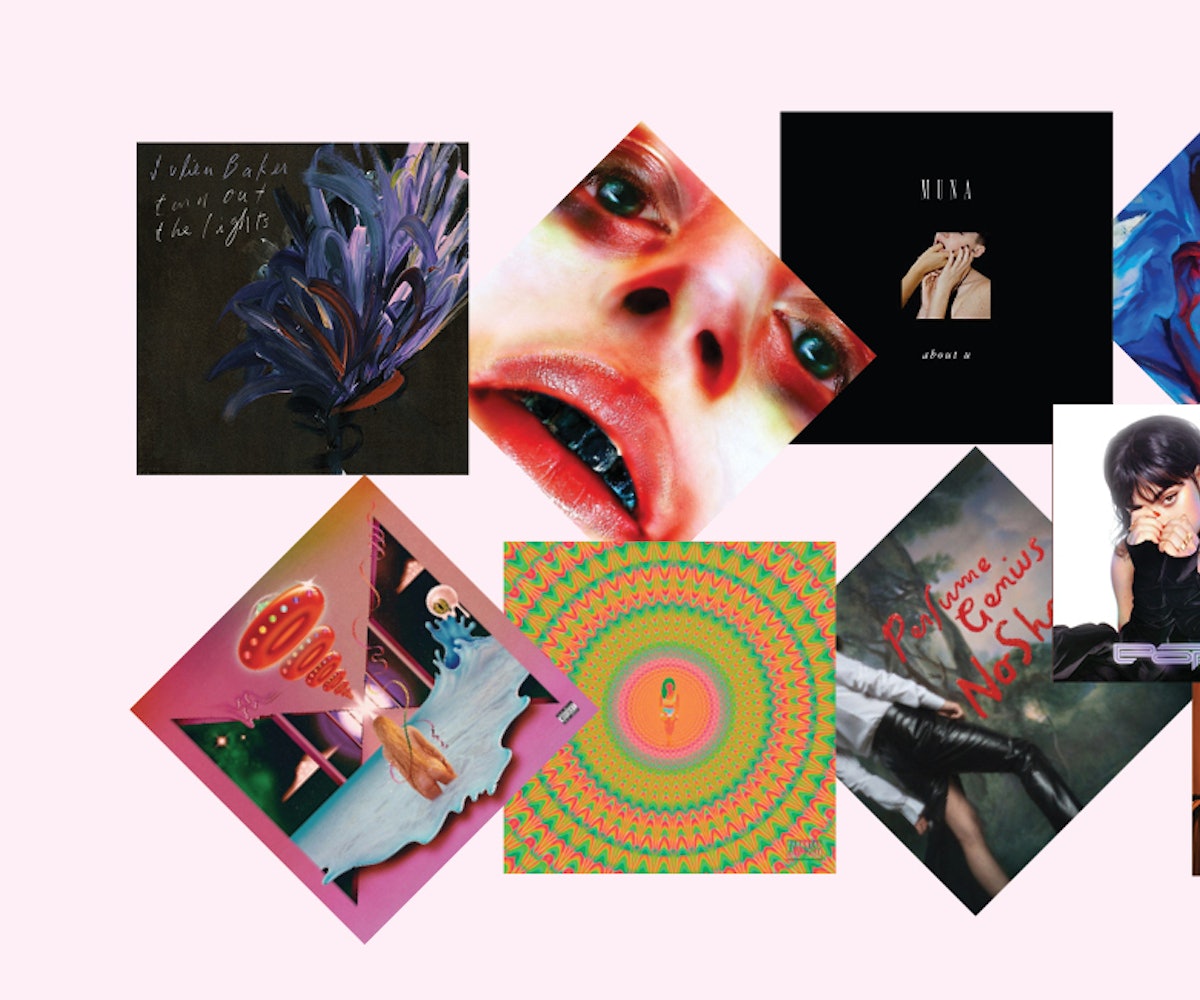 Kendrick Lamar had a great year. DAMN. is unequivocally the best album of 2017; there are no ifs, ands, or buts about it. It's at the top of everyone's year-end list because Lamar is on the pulse of politics, hip-hop, rap, and identity issues. He uses aggression as a tool. Sit down, be humble, and have loyalty. DAMN. is an album for and of 2017.

Now that's out of the way, let's dive into the other albums that defined the year and look toward an opaque future. We're talking albums of personal redemption and personal isolation, albums that revel in the grotesque and shy from reality. These 10 projects show pop does not reign supreme, despite what the radio plays. This was a year of sonic variety, one that turned its sights inward in an effort to better what was happening outward. What the next year holds is beyond prediction but, man, does it have a new standard to surpass.

Let's talk about redemption. Kesha found her voice again after a trying couple of years with legal battles, facing her accused abuser, and rehab. Would Kesha ever be able to release new music? The answer came, finally, with "Praying" and the subsequent album, Rainbow. Bitter, Kesha is not. Rainbow is a down-to-earth fusion of pop, country, and rock that keeps the focus on betterment, as opposed to resentment. "Don't let the bastards get you down," she kicks the album off with, leading to songs that seek to uplift rather than cast blame. The healing power of music is prevalent in Rainbow. This is a triumphant album, one that's worth listening to from beginning to end.

Turn Out the Lights - Julien Baker

Loneliness is universal. Faith is subjective. Music is the soul. Julien Baker proved herself to be this generation's purveyor of existential longing and heavenly sorrow with Turn Out the Lights. It's a radically spiritual album that finds Baker cursing the fates and tempting the devil. Baker's skill as a guitarist is unmatched right now, and her ability to make the density of depression and addiction feel humanely reachable is arresting.

The death of Jhené Aiko's brother set in motion a period of immense highs and low lows. Trip isn't just a document of Aiko's various substance-addled trips but a meditation on what it means to live, die, and exist in the in-between. She grasps for the moment ("While We're Young") and longs for eternal release ("Jukai"). The vibes are strong with this one. Aiko's honesty is profound; her vulnerability, startling.

Pain is pleasure and pleasure is pain. Arca's self-titled album puts the grotesqueness of sex—specifically homosexual carnality—to the forefront. The ugliness of love and the beauty of little deaths (orgasms) is offered up in songs that are jarring to the senses. This is an album that feels like a sin to listen to but is so unnervingly captivating, you do. Hell, you must listen to this album because it's one of the most startling explorations of queer sexuality.

Gone are the dark days for Perfume Genius' Mike Hadreas. No Shape pushes through the muck of self-hate and public shame and rejoices in giving one's self over to another, fully. It's an album of queer liberation, tender when it has to be and loud just for the sake of making noise. Funny what love can do to an artist.

What's it like to be a millennial female, especially a black millennial female? Listen to SZA's debut album, and you'll get a feeling. SZA goes from seeking validation from the outside world to a desire to shy away from it within a few verses. Temporary lovers get traded in for temporary highs that wind up in isolated spaces. The internal struggle of being a burden to someone you love, and yet feeling powerless to act otherwise, runs rampant throughout Ctrl. The longing to have it all knowing you can't sobers the album up, making Ctrl the sad, empowered girl's manifesto.

Kelela's debut album was well-worth the years it took to make. Take Me Apart shines in its unbridled and divine feminity. It's empowered in its sexuality, blackness, and vulnerability. Kelela nods to the icons that came before her without copying them, which makes for a sound uniquely her own and fully futuristic.

You know, from a personal standpoint, I really should not have doubted Lorde's sophomore album. "Green Light" didn't land how I thought it would, but once the negative, shimmering chorus of "The Louvre" dropped, I stood very much corrected. The four years of living Lorde did between this and her debut, Pure Heroine, distilled into an album brimming with youthful abandon, broken hearts, and sobering adult realities. It's a party album but a refined one. Only Lorde could make a word as sappy as "melodrama" something to cherish and even strive for. Jack Antonoff's production lifts Lorde out of the sonic darkness, which many hoped she'd stay in, but what Melodrama does (and does well) is show that the darkness and introspection that made Lorde a wunderkind wasn't in the music but in her words.

Charli XCX's two releases this year aren't technically albums—they're mixtapes that could easily be pressed into a double-sided album. Building off of her highly-underrated Vroom Vroom EP from 2016, Number 1 Angel and Pop 2 push Charli further into the future, bridging the gap between PC Music's polished anarchy and Top 40 fanfare. Where one revels in the party (Number 1 Angel), the other parties to run from a broken heart (Pop 2). All the while, Charli and her frequent collaborators, A.G. Cook and SOPHIE, create some of the most incredible electronic productions of the decade. Neither of these projects is defined by one sound or pigeonholed into one genre. Together, these two mixtapes are the sound of the future and a sign that all hope is not lost when it comes to exciting pop music. These are a collection of songs you'll play your kids one day, saying this is what changed music forever. You want to be wherever Charli goes because that's where the game (and party!) really is.