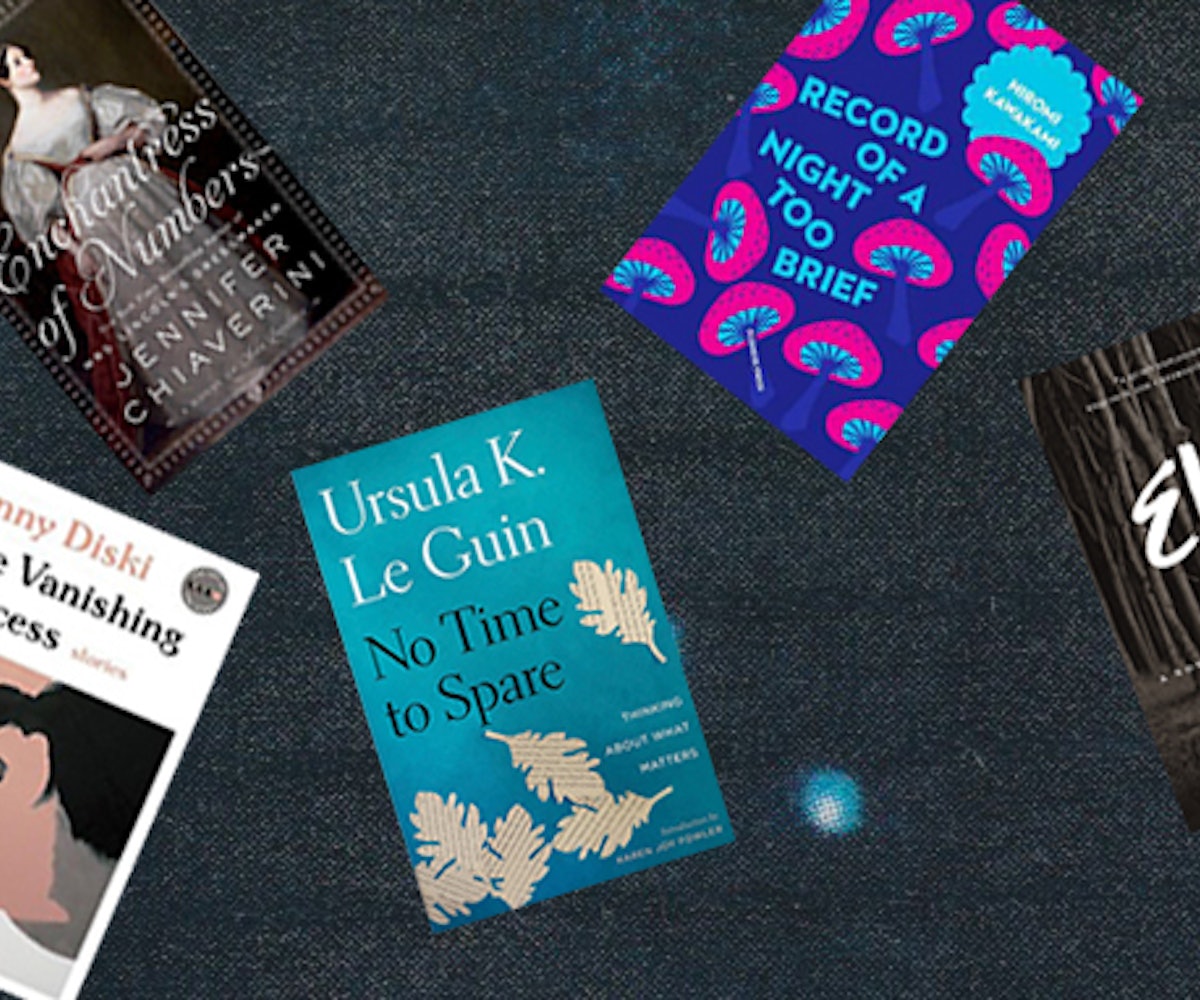 Here we are in December, probably unsure of what to do with ourselves as we work hard to stay offline for at least part of the day, lest we sink more fully into a black hole of despair. And so: Why not pick up a book? Books always help! Here are five books coming out this month that we endorse as being just the right things to read right now. And if you want to be completist about it, here are our lists of best monthly books for January, February, March, April, May, June, July, August, September, October, and November. Enjoy!

Enchantress of Numbers: A Novel of Ada Lovelace by Jennifer Chiaverini (available December 5)

Perhaps you'd like to take a break from a news cycle filled with the deeds of horrific men? Perhaps! So how about dive right into this novel about the brilliant Ada Lovelace, daughter of infamous Romantic poet Lord Byron and a mathematician mother, whose life is the stuff of legends. Raised by her mother in a strict style designed to deter any creative ventures, Lovelace would, in fact, grow up to work in the type of mathematical field her mother wanted (Lovelace is often called the world's first computer programmer). However, the passionate nature her mother sought to deny was only inflamed in Lovelace, and channeled into her personal life and her work. This book is a fascinating look at how science and art do not stand at opposite ends of a spectrum, but rather—at their best—work together, and bring us toward a new, undreamed-of future.

Diski, who died in 2016, is perhaps best known in the U.S. for her sharp, searing essays—she memorably chronicled her experience with terminal illness in a series of essays in the London Review of Books. Or perhaps Diski is known here for her novels, which revealed a dark imaginative streak and a willingness to venture into risky places, both literal and figurative. Now, with the American release of The Vanishing Princess, we can all become acquainted with Diski's short fiction, in the form of this volume of stories. From a reimagining of the Rumpelstiltskin fairy tale to a woman's quest to find the perfect bathtub, Diski's unique voice is crystal clear throughout, and a wonder to behold.

Kawakami is one of Japan's most acclaimed writers working today, and this slim volume of three stories about young women, all on different existential journeys, all experiencing loss and love, is a great place to start for readers who are new to her inimitable style. Oh, also, yes, this book does contain evil monkeys and mist monsters and snakes. So there's that, too.

No Time to Spare: Thinking about What Matters by Ursula K. LeGuin (available December 5)

Iconic sci-fi author Ursula K. LeGuin is beloved for creating other universes and expanding the minds of all who read her. What a pleasure, then, to dive deep into LeGuin's own mind, in this book composed of pieces from LeGuin's blog, in which she mused on subjects ranging from why it's a losing (and silly) battle to deny one's age to the courage it takes to eat a boiled egg to... cat ownership. It's all here! And it's delightful, and pretty much the perfect book to pick up and read from for a few minutes whenever you want a reliably sane voice to enter your head.

Mozley's debut novel (which was a finalist for the prestigious Man Book Prize) is a twist on a dark fairy tale; it even includes a gruff but loving father who goes off to do mysterious work in the woods, a brother and sister who are going through their own adolescent coming-of-age experiences, and a vicious, seemingly inescapable cycle of revenge and violence. Mozley's writing is lyrical and entrancing; it's all but impossible not to get as lost in it as you would in a foreboding forest. No doubt you'll feel profoundly changed once you get out the other side.