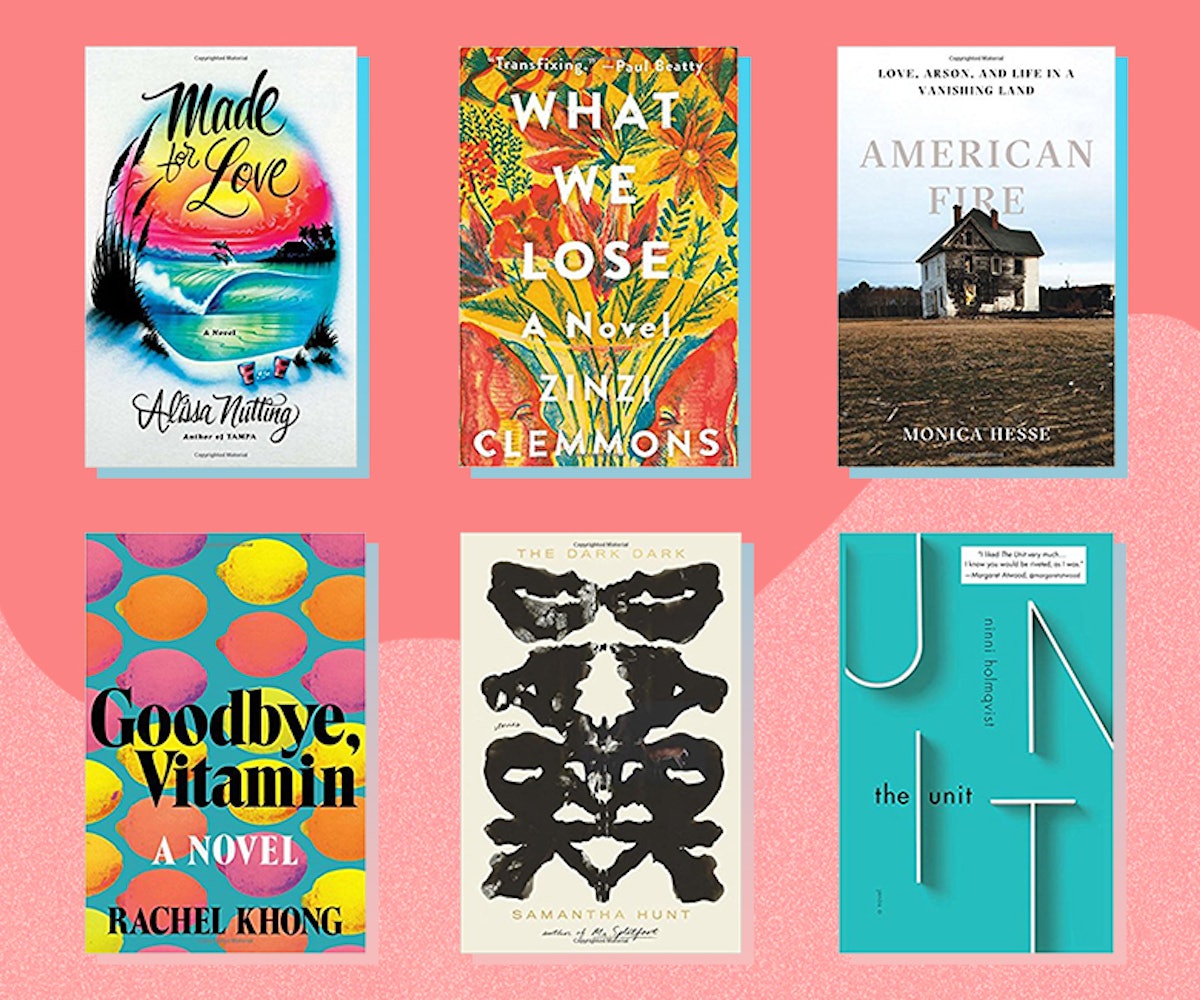 Every month I recommend books that are really great and everyone should read because they're really great. This month is no different, except this month: These books are, like, really great. I mean, these books feature amorous dolphins, sex dolls, a scheming woman named Fiffany, and a meatloaf under a Christmas tree named Phyllis. And that's just one book! (Made for Love, which is brilliant.) So, you know, read one of these or read all of them, but just know that whichever book you choose, it's going to blow you away in the best possible manner. Happy reading.

Made for Love by Alissa Nutting (available now)

There is a multitude of paths to a dystopian reality. We’re all pretty familiar with most of them by now: nuclear war, environmental catastrophe, the rise of religious extremism, economic collapse, even the election of a cretinous buffoon with the vocabulary of a 7-year-old. But there’s also another less-considered route: love. Perhaps it doesn’t register as disastrous in the same way that, say, catastrophic climate change does, but who says apocalyptic hell has to be global? In Alissa Nutting’s new novel, Made for Love, dystopia gets personal, as one woman, Hazel, flees a toxic marriage in which her husband, Byron, has been using all the means at his disposal to control every aspect of her life. And what means they are! Byron is a tech magnate whose monolithic corporation, Gogol Industries, is making great progress toward its goal of inserting itself into all elements of human existence. Byron tracks Hazel’s every move; it’s Fitbit-as-marital-prison. The last straw for Hazel comes when Byron wants to take their love to the next level, by connecting them via brain chips for a literal “mind-meld.” Hazel flees, and finds herself attempting to forge a new life from a senior-citizen-filled trailer park, where she lives with her father and his sex doll, Diane. Nutting’s uniquely hilarious voice is the perfect guide to this darkly surreal, extremely relatable universe, in which the absurd becomes expected and our own personal hells feel like they’ve been perversely rendered in neon, airbrushed paint. Oh, and there are dolphins. What more could you want in a book, really?

What We Lose by Zinzi Clemmons (available July 11)

This debut novel (which has been praised by The Sellout author Paul Beatty, which is very high praise indeed) is a stunning coming-of-age story, centered around Thandi, a young black woman who is grappling with the trauma of her mother's death and what it means for her own complicated sense of identity. Though Thandi was raised in Pennsylvania, her mother grew up in Johannesburg, South Africa, and thus she has always struggled with feelings of not belonging to one place or another. Clemmons deftly explores this problem of feeling in-between, and how an absence of any distinct identity is its own difficult category of being. With lyrical prose, Clemmons offers up one of the best meditations on love, grief, and what it means to find yourself that we've come across in ages.

This review first appeared in our summer book preview.

No better time than summer for reading about criminal activity, particularly arson, because, you know, fire and heat and smoke and destruction, those are all such summery concepts. Anyway! Hesse's book is about the dozens of mysterious arson cases that plagued a remote rural county of Virginia. Though the culprits behind the 67 fires was caught, the case, as Hesse discovered, didn't end there. American Fire is a fascinating reported tale that is less a whodunit (Charlie Smith and Tonya Bundick, the "Bonnie and Clyde of the Eastern Shore" are revealed to be guilty early on in the book), and more a case of why did it happen at all? The answers that Hesse, a reporter for the Washington Post, reveals say a lot not just about the case at hand, but also about the state of America and the untold number of fires that are constantly threatening its safety.

Khong (who, by the way, is responsible for one of the greatest Grub Street Diet's ever) is here to brighten up your summer with a debut novel that is sure to leave you laughing and crying in constant recognition at the absurdities of life, full as it is of frustrations and joys. Centered around a young woman (well, Ruth is 30, which, who even knows what "young" means anymore), who is devastated about her engagement ending, has quit her job, and moved back in with her parents, who are dealing with the fact that her father is battling Alzheimer's, Goodbye, Vitamin maybe doesn't sound like a light summer read, but it manages to subvert any expectations you might have about such a sad premise and take you on a provocative journey toward understanding the complications of love, both familial and romantic. It's poignant and compassionate, accurately demonstrating the ways in which we struggle to maintain our composure even when we're sure we're falling apart on the inside. Khong's insights into our relationships with our parents, our partners, and ourselves are profoundly moving, and the ending scene left me in tears—a condition that only stopped so that I could immediately text everyone I know that they had to read this brilliant book.

A similar review first appeared in our summer book preview.

This collection of brilliant, twisted short stories by Samantha Hunt is about a lot of things—pregnancy, ghosts, infidelity, loneliness—but it all revolves around transformation, rebirth. This process, of becoming something new or creating something out of nothing, is inherently terrifying (what is scarier than childbirth? Nothing except maybe death itself), and Hunt plays with fear, making this collection the kind of book best read in the white hot glare of the summer sun, where the only dark things are those that exist in your mind, or on the page. I'm not saying this to frighten you away from this book; most definitely read it! Just know that, much in the same way Hunt describes pregnancy as being a "9-month dip into the infinite," this book, too, will leave you feeling like you're traversing the edge of a black hole. But, you know, just jump in. The water's fine.

If you've already read and loved Margaret Atwood's The Handmaid's Tale (and if you haven't, you know, get to it), but just feel like you haven't spent enough time in a dystopian world in which a large portion of society exists solely to be used to perpetuate the existence of the ruling power structure and the elite within it, then The Unit is for you. Holmqvist's novel also has shades of another dystopian classic, Kazuo Ishiguro's Never Let Me Go, in that the plot centers around organ farming and "donations" that ultimately leave the donors, well, dead. In The Unit, these donors are middle-aged men and women who are unmarried and childless, making them dispensable in the eyes of a society which only values the nuclear family. It's a chilling and provocative tale, one that can't help but make you think about the ways we determine whether a life has been "well-lived" and what even makes a life worth living at all.