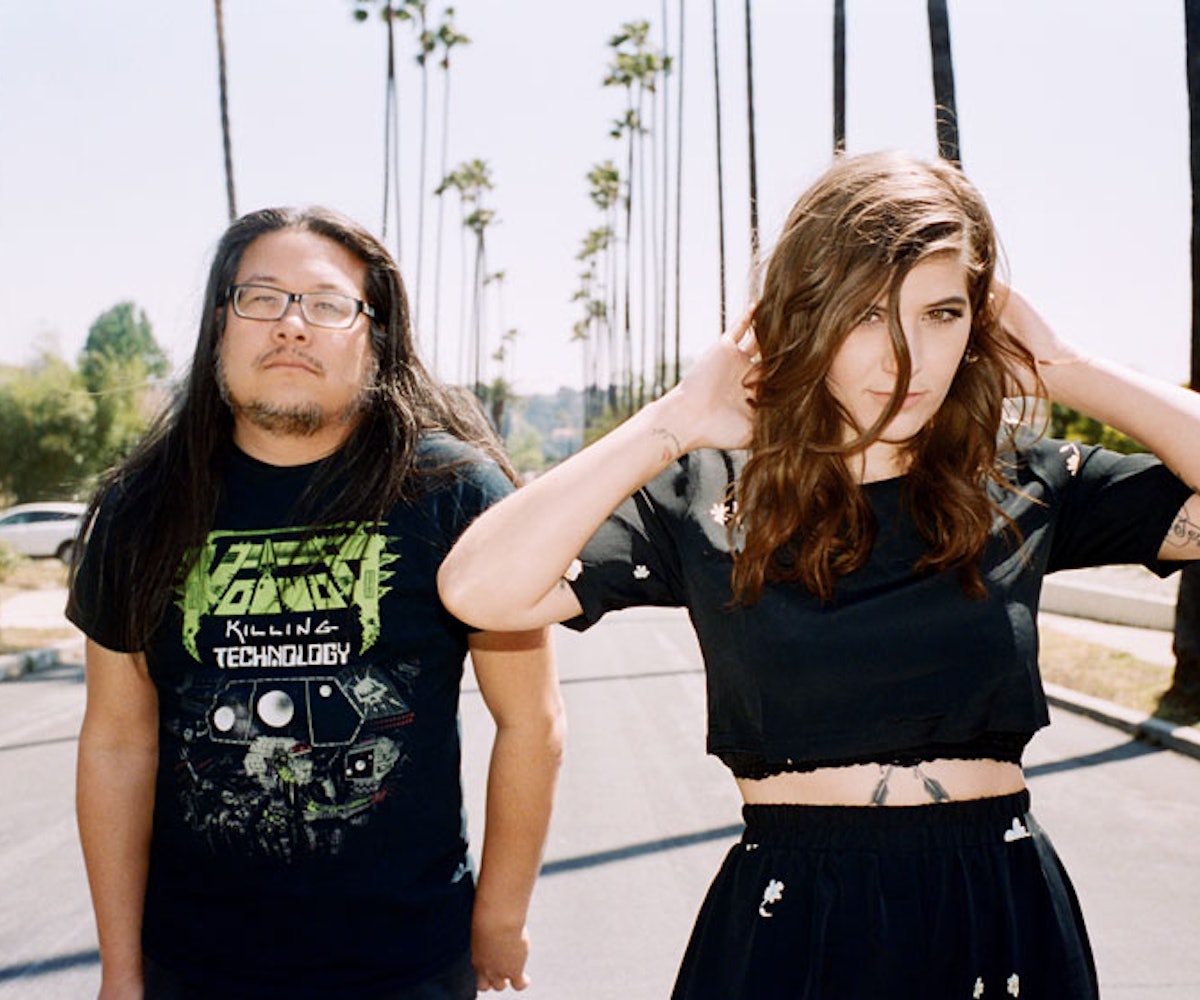 Bethany Cosentino and Bobb Bruno of best coast take an indie-pop dip into a whirlpool of ’90s alt-rock nostalgia with California Nights.

Bethany Cosentino’s famous cat, Snacks, is crawling across her pristine glass dining room table. He’s after the half-eaten sandwich that Best Coast guitarist Bobb Bruno has left out. “He’s going to eat that,” says Cosentino, prompting Bruno to snatch the plate away just in time. Snacks, who appeared on the cover of the Los Angeles duo’s 2010 debut album, Crazy for You, seems to think he’s their third band member. As Cosentino tries to answer a question about their latest album, California Nights (out now), he yowls loudly.

“You want to get in on this?” she asks, leaning over to stroke him. “You want to answer this one?” Eventually, he settles into a chair around the table and goes to sleep. Elsewhere in Cosentino’s airy and eclectic Eagle Rock home are taxidermied animal heads that she picked up on tour, as well as mid-century modern and Southwestern pieces contributed by her mom.

Bruno lives nearby, but despite their proximity the two hardly ever hang out unless they’re touring or making an album. “Our dynamic is very strange to a lot of people,” says Cosentino. “But to us, it makes the most sense. We’ve both played in bands before. We both really respect each other’s space. When you’re on tour, especially on a bus, you’re constantly around people. On tour it’s hard to find time to yourself. I know if I text him, he’s there. We don’t really see each other unless it’s work-related.” Bruno, who defers to his bandmate to answer most of the questions, nods in agreement. “I think that saves us a lot of drama,” adds Cosentino. She looks over at Bruno. “I love you,” she says. “But I would kill you if we lived together.”

The two musicians’ working relationship is collaborative, and based in mutual respect as well as an openness to new ideas. “I just worry about what goes into the songs,” says Bruno with a shrug. “If I have an opinion, I’ll voice it, but I trust Bethany’s instincts and I trust our producer.” For California Nights, that job was handled by Wally Gagel, who in the ’90s served as house engineer for Cambridge, Massachusetts’ Fort Apache Studios, the birthplace of some of the era’s most iconic recordings by artists such as Belly and Sebadoh. His impact on Best Coast’s contemporary pop sensibilities is audible in California Nights’ slow and yearning guitar solos and stoned, singsong vocals. It’s an album that continuously creeps toward the sun, even when through a haze of crunchy alt-rock feedback.

Best Coast started considering a third album at the end of 2013, armed with some ideas but no preconceived notions about how they would all fit together. Cosentino had a few songs written, but wanted to wait until the last minute to pen more, hoping that the pressure of the impending studio time they’d booked with Gagel would urge inspiration. “You can sometimes get your best work out that way,” she says, noting that she took the same approach in school with her research papers. The trick worked: Cosentino wrote the title track two days before she and Bruno began preproduction.

“As a song, it stands out and also shows the growth of Best Coast as a band over the past few years,” notes Cosentino. “There’s a juxtaposition in my songwriting in that the music sounds upbeat, but then the lyrics are a little bit darker or more gloomy. That’s how L.A. is in a way. You look outside and see palm trees and blue sky and mountains, but then if you’re actually an L.A. insider, you know there’s Skid Row and crime and the insanity of the entertainment industry. It’s light and dark, and we wanted to play on that, so it made sense to call the record California Nights.”

The album title also refers to Cosentino’s chronic insomnia, which she’s been struggling with since her teens. The song “Sleep Won’t Ever Come” tackles the subject head-on. “I spent a lot of time either writing stuff at night or waking up the next morning and writing about the stuff that was keeping me up at night,” she explains. “It’s hard not to be an insomniac when your job is to be awake at weird hours.” Bruno interjects: “You don’t even start the work part of your day sometimes until nine or 10 at night when

Both musicians are proud of how varied the songs are in style and how much they showcase the group’s evolution. “I really, truly did not overthink this,” says Cosentino. “I’m not just saying that. Bobb can attest to that. I was not being too neurotic this time around.” He nods and agrees: “It was a really easy process.”

Cosentino reflects on that for a moment, looking over to watch Snacks still quietly dozing in his chair. “[This album] made me feel like more of a professional person,” she says, smiling as if she’s pleased to admit it. “Five years later, we’re now maybe professional.” She pauses, then sheepishly concedes: “But we’re still not very professional.”