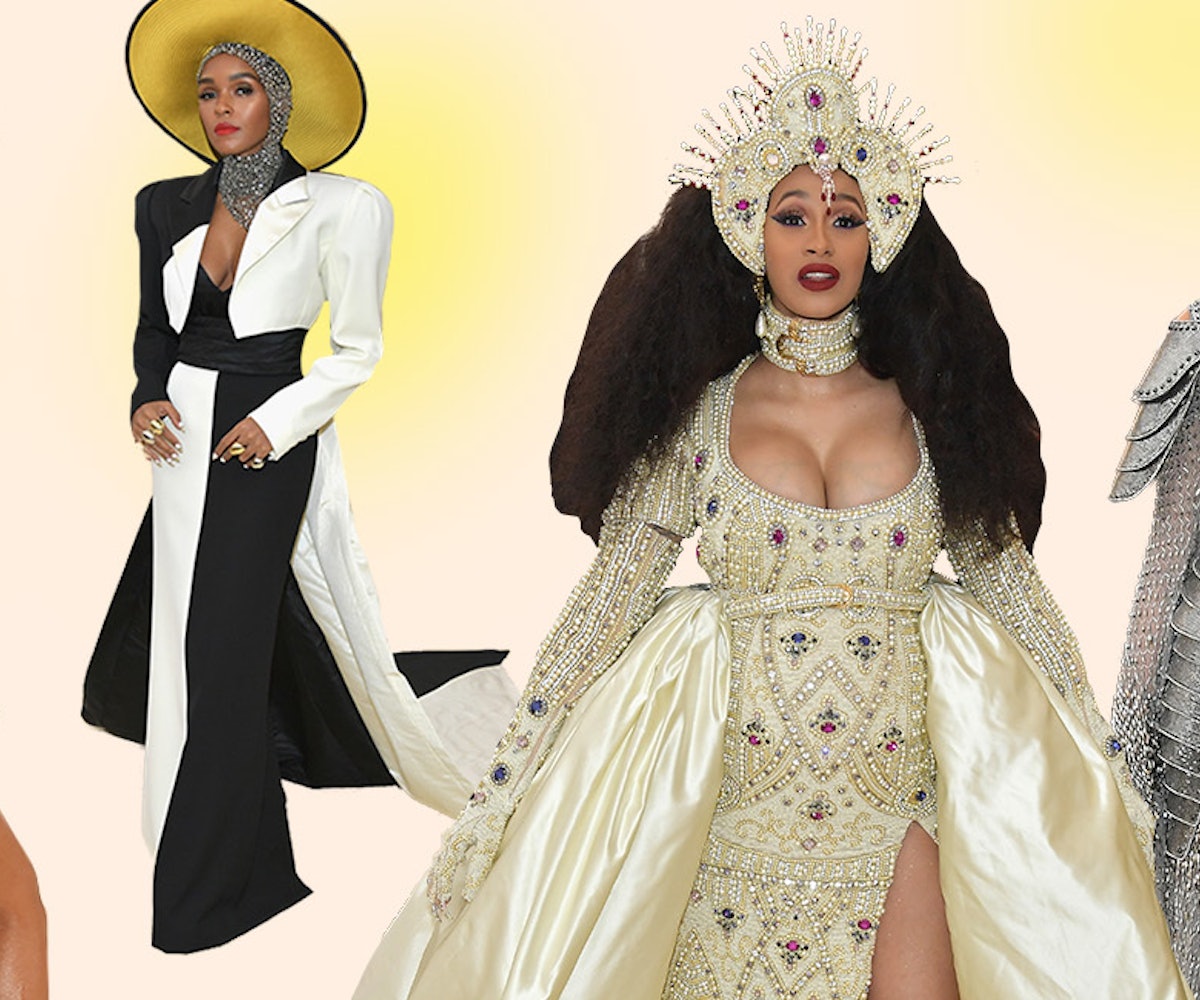 This year’s Met Gala quickly became notorious for having a pretty controversial theme—that's what happens when you choose “Heavenly Bodies: Fashion and the Catholic Imagination” as your focus—and many were concerned that the red carpet fashion would stray into gauche territory, with celebrities scandalizing just for the sake of scandalizing (barely there "naked dresses" are a mainstay of Met’s Gala red carpet, after all). But instead, the fashion at this year's gala was on-point, sartorially rousing, and, even, heavenly.

A big part of the exhibit—the Costume Institute’s largest to date—focused on couture inspired by Catholic iconography from the likes of Dolce & Gabbana, John Galliano, Gianni Versace, Yves Saint Laurent, and Cristobal Balenciaga, so it makes sense that some of these names came up on the red carpet as well. The theme demanded attire that was gilded, transcendental, and worthy of worship—and celebrities delivered with their Sunday best.

Rosaries, adorned crosses, papal-inspired silhouttes, and halo-like headpieces (so many headpieces!) all made their way down the red carpet on the likes of celebrities like Lily Collins and Cardi B. A few people embraced the theme even more wholeheartedly, showing up dressed like literal servants of the God (Greta Gerwig) and nuns-turned-queen of the nights (Bella Hadid). More unexpected were the chain mail-inspired getups seen on real-life warriors Zendaya and Janelle Monáe.

Ahead, see some of our favorite looks from the night.

“Heavenly Bodies: Fashion and the Catholic Imagination” opens at the Metropolitan Museum of Art on May 10.

Rihanna became our new Pope in this stunning Maison Margiela ensemble complete with a clergy hat and cape. We bow at the altar of her sartorial greatness.

Lily Collins gave a glimpse at what nuns could look like in the future in an architectural black-and-white Givenchy gown and a spiky headpiece.

Zendaya proves that armour can look high-fashion in this Joan of Arc-inspired custom Versace.

Never one to disappoint, Solange stepped out on the red carpet in an Iris Van Herpen work of art, knee-high boots, and a halo.

SZA was the embodiment of a heavenly goddess in a blush Versace gown and an orbit-inspired headpiece. Hail Mary!

Cardi B was a queen on the way to her coronation in a custom Moschino by Jeremy Scott (who was also her date) dress decked out with pearls, crystals, and gems. Talk about immaculate conception.

Kate Bosworth looked like an angel who descended from the heavens in a delicate, gold-flecked Oscar de la Renta, gown paired with a bead-trimmed veil.

Cara Delevingne was the punk goddess of our hearts in this stunning, all-black ensemble from Dior.

Bella Hadid embraced the theme and turned it up a notch in a patent strapless dress from Chrome Hearts paired with a papal bolero and a black veil.

Rita Ora stunned in a black Prada gown paired with a long train, sequin elbow-length gloves, and a show-stopping headpiece.

We had no tears left to cry by the time Ariana Grande stepped out on the red carpet in this Vera Wang gown that was part Sistine Chapel, part Disney princess.

Only Janelle Monáe could take a mail coif, top it with a Stephen Jones hat, and pair it with a Marc Jacobs gown and look this elegant.

Amal Clooney was one of the few celebrities who dared to wear pants (designed by Richard Quinn, who recently received the Queen Elizabeth II Award for British Design) on the red carpet, and we applaud her fearlessness.

Sarah Jessica Parker paired her Dolce & Gabbana gilded gown with a head-topping altar. An altar!!! She needs nothing else to land on this list. But that train does help.