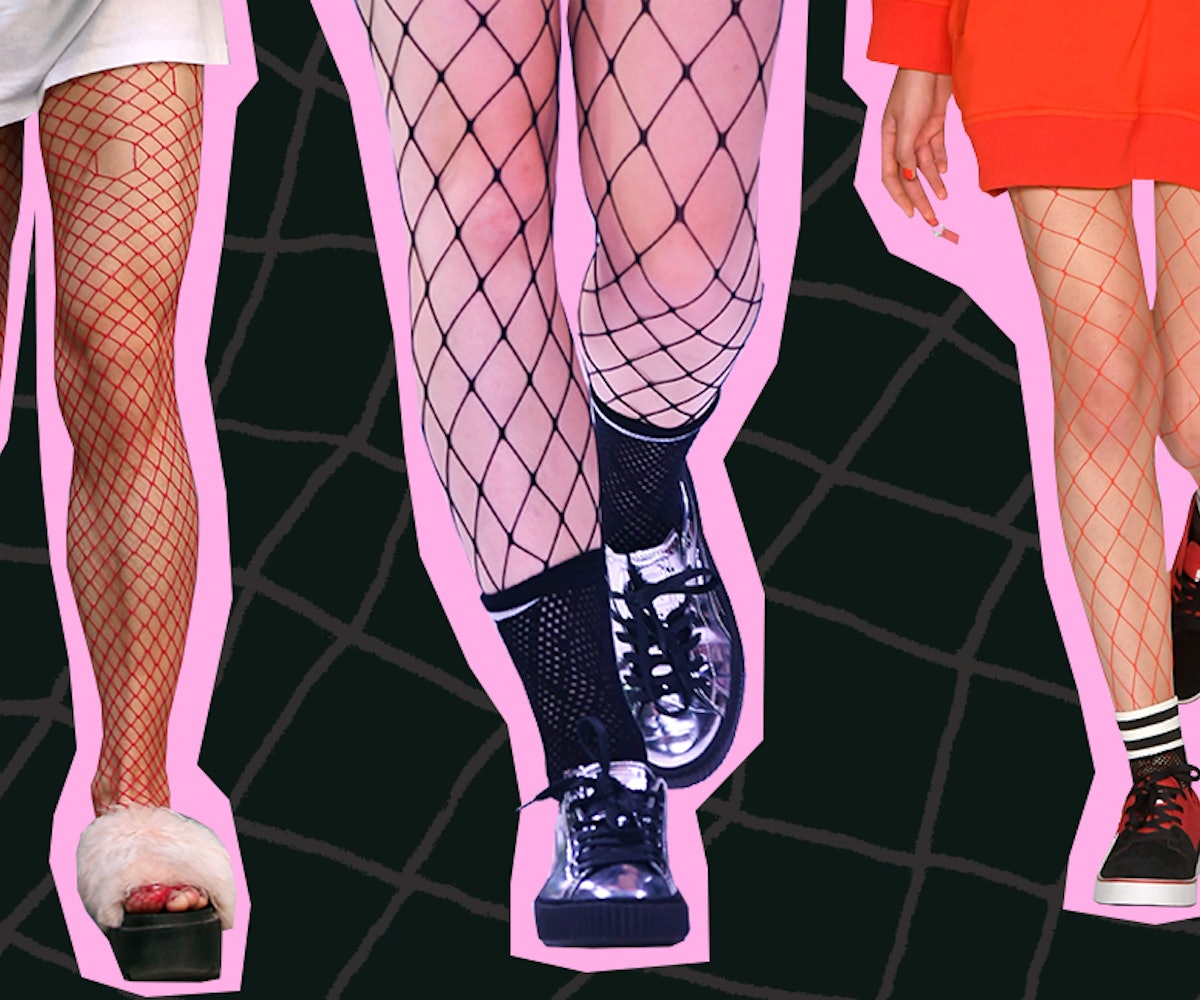 Ever since I was a little girl, I’ve bought into the pop cultural mythos of the fishnet stocking as a signifier of sexual autonomy, confidence, and independence. As someone who grew up in a conservative environment, the expression of sexuality—let alone via style experimentation—was an impossibility. My parents told me Forever 21 was too “adult of a store,” that the modest things I did choose to wear were still “too loud,” and the trendy items I so badly wanted were “inappropriate.” As I grew up, I began to understand that my parents mostly took this approach because they worried that people wouldn't take me seriously. Still, though, I have to ask: How exactly does my love of fishnets discredit me? And if I know that it might, why don't I care?

It’s crossed my mind that my continued adherence to this particular item of clothing is symptomatic of something much deeper than “fashion.” As many Instagram meme-makers have teased, maybe my love of the eyebrow-raising accessory is a result of my own lingering insecurities. Or perhaps it’s evidence of my desire to project a level of “adulthood” that I was never really allowed when I was younger. Maybe it’s a mixture of all the above, as well as a true admiration for the no-fucks attitude that women seem to project when they slip a pair of fishnets on for the night. Or maybe I just look really fucking good in them.

The jury's still out on whether my love of fishnets is a symptom of my subconscious desire to toy with the male gaze or overtly subvert it (likely both), but whatever the reason, I’m pretty sure that none of this invalidates my current love of the fishnet, nor is an accurate reflection of my own admitted shortcomings. If anything—perhaps in the spirit of the “fake it till you make it” ethos—fishnets are better viewed as a litmus test of projected confidence, a mere step in the journey to full, unflappable self-assurance. After all, they are one of the few items of clothing that bequeath a level of bolstered bravado upon a wearer—though only if you’re open to the possibility (not to mention the inevitable stares).

Fishnets are strangely self-selective in that way, but I’m a firm believer in the idea that everyone looks amazing with a little skin showing. As women, we have been told to shrink ourselves in the face of scrutiny, to coquettishly adhere to the demands of the male gaze, to internalize the societally mandated shock of being seen as attention-seeking—fishnets, then, provide a rebellious sort of reprieve from all that. They provide a constant reminder of our own autonomy—our ability to boldly choose the way we present ourselves to society-at-large. And hey, if your personal reaffirmation of sartorial independence and sexual agency offends others, then so be it. After all, we should be all working toward the point where one can wear fishnets (or any other sort of suggestive item of clothing) sans broader cultural critique or stigma. So until then, catch me wearing fishnets of all colors of the rainbow and proudly flashing them in your face.