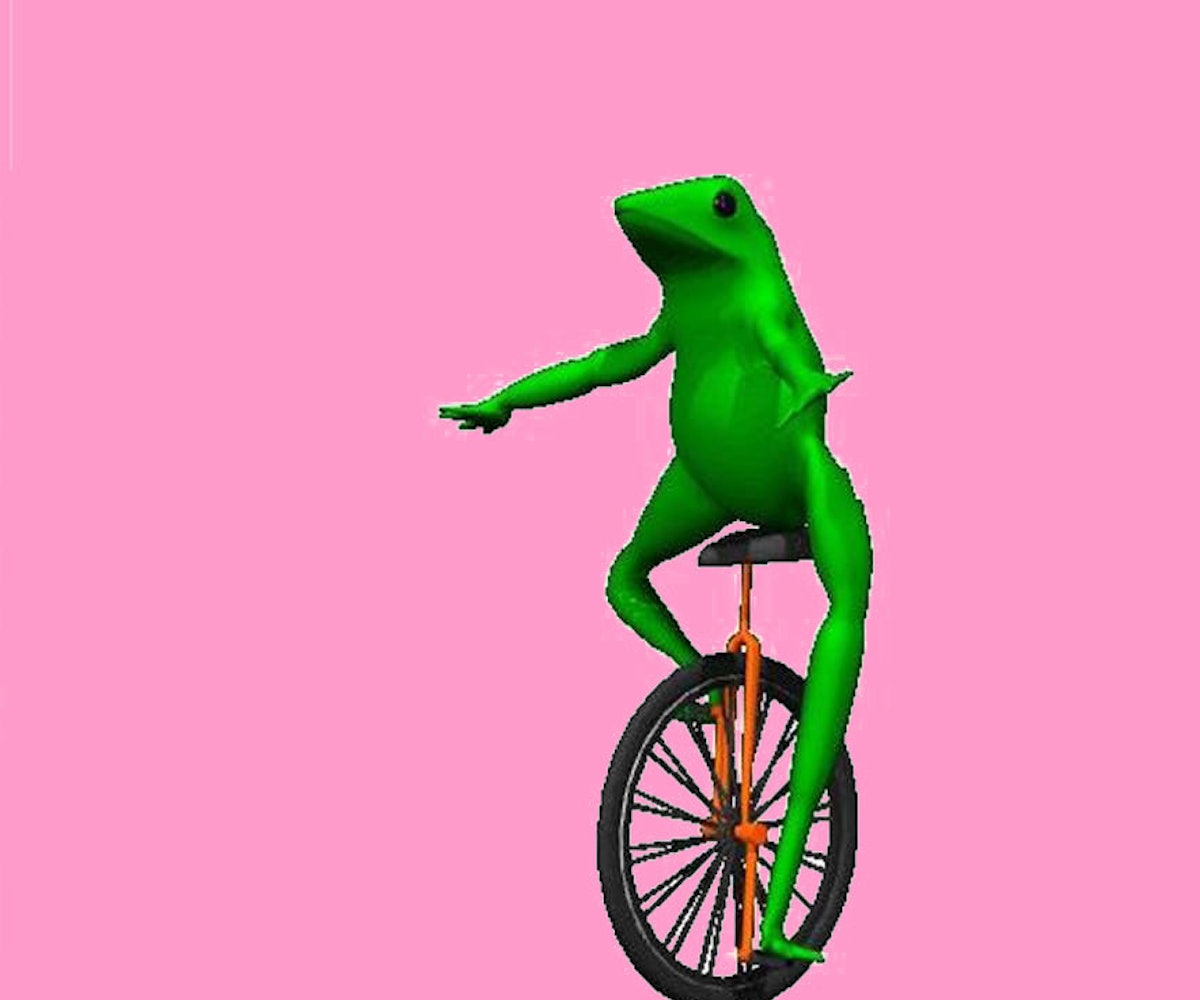 Memes are a reason to live. They are, as one might rightly say, "our only salvation from the horror of existence." You don't need us to tell you this year was a dumpster fire. You can probably name more troubling things that happened in 2016 than funny and clever ones.

But fear not, the memes of 2016 were true gifts. Weird voices shouting about Vans, two instances of pettiness, and more frogs than you thought necessary filled our social media feeds daily. Memes, after all, get your message across better and with a sense of wit. The following are the year's best memes that got us by and, more importantly, made us laugh in a time that seemed to have no room for laughter. May the new year be a meme-orable one.

Josh Holz and Daniel Lara became viral sensations earlier in 2016 after a video of Holz approaching Lara and complimenting his white Vans was uploaded to the internet. On paper, that doesn't sound too viral-worthy, but Holz pitches his voice, so it's a little off-putting which makes Damn, Daniel so catchy. What's more, it's a positive meme and doesn't seek to do anything but uplift.

Here come dat boi, the unicycle-riding CG frog that is absolutely absurd. Yet, it's heartwarming at the same time. O shit waddup!

Chances are you've seen this meme or some variation of it before, but don't know its origin. It's from Senhora do Destino, a telenovela, and shows Renata Sorrah playing Nazaré Tedesco. It's dramatic and appropriately captures the feeling of being confused.

This year, Arthur was defiled and turned into PG-13 life scenarios on Twitter and Tumblr. Screenshots of D.W.'s and Arthur's fists dominated, but really, any Arthur image would suffice.

The final weeks of 2016 saw the emergence of one of the best memes to ever make its way to our feeds. It shows Kermit The Frog confronting his Sith Lord lookalike from 2014's Muppets Most Wanted. It's simple: Kermit represents your good side, and Evil Kermit represents your pettiness. Go through a bunch of these, and you'll be nodding right along saying, "If this ain't me!"

Honestly, Harambe should not be a meme. It's so ridiculous and is exactly why we can't ever have nice things. Anyway, Harambe was a gorilla who was shot and killed at the Cincinnati Zoo after a little boy fell into its pen. Many people (i.e. fuccbois who just want to watch the world burn) took Harambe's untimely (and possibly unjust) death and decided there was room to put their tongues in their cheeks. They made a Change.org petition to bring Harambe justice. Because humans are the worst, the petition made #RIPHarambe trend and soon enough, people were treating the death of Harambe with a dash of irony and Photoshopping him next to legends, like Prince and David Bowie. "D*cks out for Harambe" also became a thing that many men would yell on the street. This is how people spent their time in 2016. The worst part about it, though, is how absurdly hilarious some of the memes are. "Bush did Harambe"? C'mon. That's nuts.

Vice President Joe Biden and President Barack Obama have a special friendship. This we know to be true. Over the course of the election season, the internet decided to riff on that and make Joe appear to be some jokester out to make President-elect Donald Trump's future in the White House as miserable as possible.

Some things just can't be explained, and one of those things is the internet's collective obsession with Spongebob Squarepants. This year saw two major Spongebob memes emerge: SpongeGar and Mr. Krabs Blur. While SpongeGar took a bit to understand, Mr. Krabs always hit its chaotic, what-do-i-do mark.

Twitter loved itself some poetry this year—specifically, the "Roses are red" meme, which turned ridiculous news headlines and/or film screenshots into poems.

The presidential debates were stressful. The Debate Duets that emerged from debate número dos, however, were the exact opposite.

Skai Jackson, from Disney Channel's Jessie, became an overnight meme after she tweeted a photo of her sitting backstage at Good Day New York. Enough people read Jackson's posture and expression to be petty, and thus, launched Skai Jackson to meme gold.

Carly Rae Jepsen's 2015 song "Run Away With Me" ran itself into 2016 as Vine royalty. The song's opening saxophone notes, an iconic moment in modern-day pop music, would go on to soundtrack anything someone with access to video editing software, time on their hands, and ambition dreamed of. A delight, if we do say so ourselves.

The Entire Bee Movie, but...

So, this whole "_____ but every time ____ it gets faster," and its other variations became a thing late in 2016, with The Bee Movie being the most famous. It's mind-boggling.

This meme doesn't have a proper name yet. Essentially, attaching the photo of someone turning up the volume and a screenshot from a Jay Versace Vine signifies whatever music selection that comes before is so darn good, you're sobbing/screaming/going through it. It is usually used ironically.

This is a real thing Kim Kardashian said on Kourtney and Kim Take New York. It's a brilliant example of genius reality TV editing and one that caught hold this year for reasons still unclear. Regardless, it spawned a slew of takes on various ways we drop hints that we are ____.

NEXT UP
Entertainment
Netflix's 'Dahmer' Criticized By Victim's Families
Entertainment
Shania Twain's "Waking Up Dreaming" & 9 Other New Songs Out This Week
Entertainment
Who Will Rihanna Bring To The Super Bowl?
Entertainment
Rina Sawayama's "Happier Than Ever" Cover Is A Must-Listen