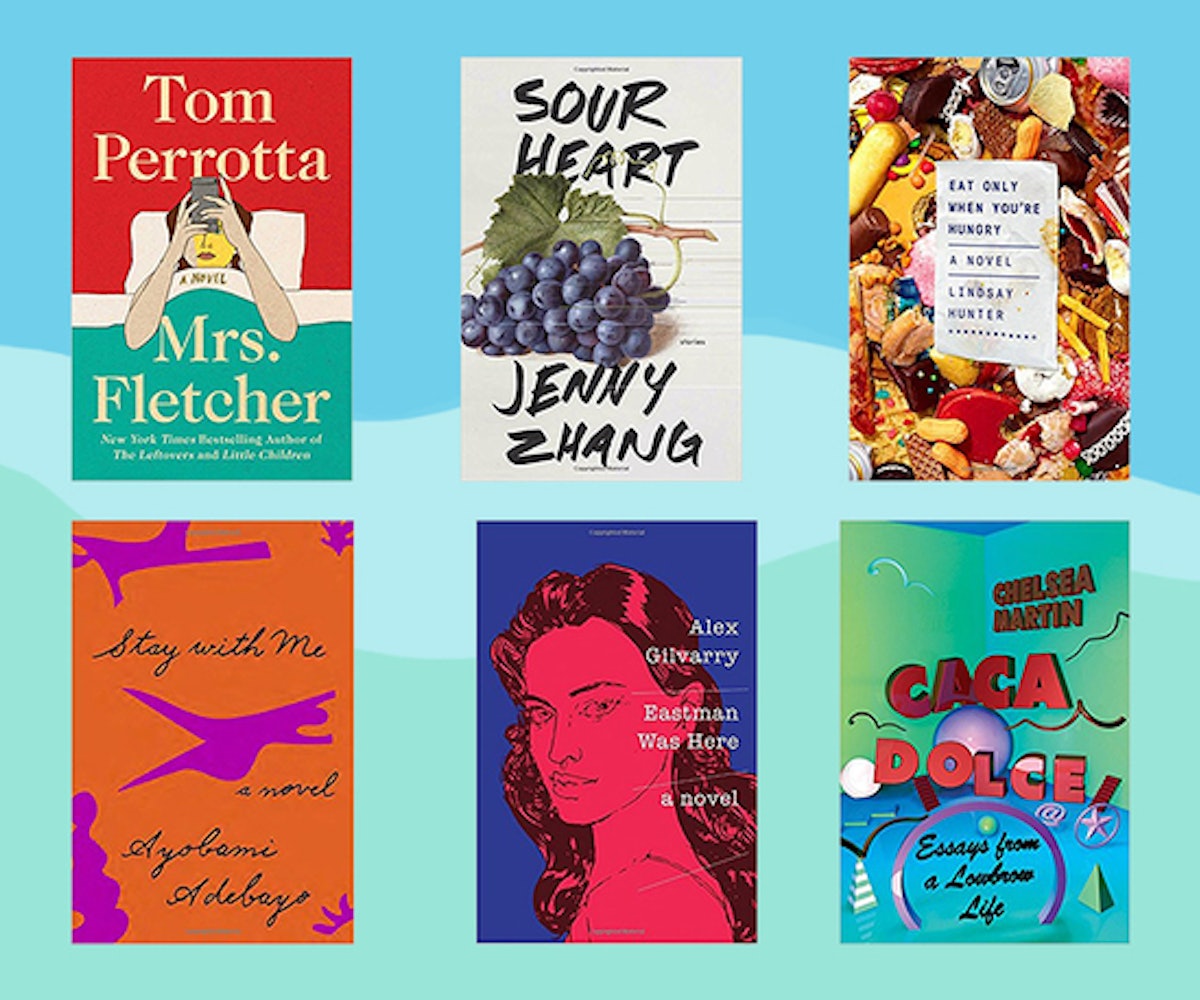 Long, hot days require reading material. Luckily, that's exactly what we've got for you in the form of these six books, all of which would be great beachside companions.

While Perotta is perhaps best known now as the author of The Leftovers (the book upon which the HBO series is based), it's also worth noting that he's the author upon which the superiorly entertaining movies Election and Little Children were based too. All of this is to say, the man knows how to weave a plot, and his latest novel is ample proof of that. Mrs. Fletcher is a return to the satiric suburban grounds of Election, and revolves around both empty nester mom Eve, who's having a sexual awakening thanks to taking classes at her local community college and the recent bestowal of the title "MILF," and Eve's son, Brendan, a former high school jock who is on his own self-discovery quest now that he's in college and finds that his bro-y ways of thinking don't apply anymore. If the existential dilemmas of The Leftovers or some of the darker plot elements from Little Children are scaring you off this book, don't let them; Mrs. Fletcher is an often laugh-out-loud send-up of sexuality, bros, and the weird corners of the internet (think, MILFateria.com), and thus the perfect beach read for basically everyone.

There are the writers whose work makes you feel like you’ve arrived home, and there are the writers whose work makes you feel like you’ve gone somewhere entirely new. Then there are the writers whose work makes you feel both of those things at the very same time. Jenny Zhang is one of them. Her writing, whether it’s her poetry, essays, criticism, or fiction, is resolute in its ability to unsettle and even uproot—lighting your every nerve on fire, leaving your every synapse flashing—before gracefully relocating you with a newfound sense of firmness in yourself, a new understanding of who “yourself” actually is. Zhang’s debut story collection, Sour Heart, comprises seven narratives that can fairly be categorized as coming-of-age tales, but which transcend any notion you might have of what that even means, courtesy of Zhang’s singular voice. The collection, which is the first release from Lena Dunham and Jenni Konner’s new publishing imprint, Lenny, takes readers into the lives of several young women growing up in New York City, and explores issues of family, displacement, identity, belonging, and struggle. The stories also examine different aspects of the immigrant experience, affording a multifaceted, exquisitely beautiful take that feels especially relevant right now. It’s an insightful and striking work, one that aptly demonstrates Zhang’s prodigious gifts. —This review first appeared in NYLON's June/July issue

Eat Only When You're Hungry by Lindsay Hunter (available August 8)

Hunter's book is not exactly what you'd call a feel good novel, but, you know, fuck a feel good novel. Rather, Eat Only When You're Hungry is a forthright, refuses to blink, often darkly hilarious look into the devastations of addiction, and the many ways we use different substances—drugs, alcohol, food... each other—to dull the psychic pain with which we live. Centering around the overeating 58-year-old Greg, who is searching for his missing addict son GJ, Eat Only When You're Hungry tackles everything from the crumbling remnants of the American dream, the ways in which we fall prey to our weaknesses again and again, and what it means to persevere against almost insurmountable odds. It doesn't offer up any easy answers, and there are ways in which it can be frustrating to read about people who don't make so called "good choices," but that frustration is just a type of recognition of our collective humanity, in all its miserable, glorious, heartbreaking beauty.

Stay with Me by Ayobami Adebayo (available August 22)

This is Adebayo's debut novel and it portends a blindingly bright future for the young writer. Set in Nigeria, the story revolves around husband and wife, Akin and Yejide, who navigate both their own expectations about their marriage and those placed on them by the society in which they live. Though the couple has resolved to stay monogamous, that changes when Yejide cannot get pregnant and Akin is presented with a second wife; things are further complicated when Yejide becomes pregnant in a way that nobody was expecting would happen. Beyond having all the makings of an epic page-turner just based on its plot alone, Stay with Me really shines is in its depiction of both Akin and Yejide's accounts of what happened to their marriage—the choices they made, the lies they told—making it possible for the reader to more clearly see all the ways our secrets make us sick, and how the pressures placed upon us can lead to devastating results.

The month of August is as good of a time as any to ask: Why are men always asking us to feel bad for them? I mean, think about it: When was the last time a dude wasn't begging for recognition that he too has suffered? Or at least looking for approval of his choices? It's exhausting! But, you know, not so exhausting that we don't recommend spending hours and hours immersed in the world of Alan Eastman, the titular character in Alex Gilvarry's second novel. Eastman is a New York writer whose life has quite completely fallen apart around him, so he does what any totally-sure-of-his-own-vastly-under-appreciated-talents male writer would do in 1973 (when the story takes place), and he heads off to Vietnam to cover the last days of America's most ill-conceived war—or, one of them, anyway. Eastman is not an all together admirable character; he's prone to mansplaining and self-mythologizing. And yet it's hard not to sympathize with him, since, in Gilvarry's deft hands, Eastman is clearly a relic of his times. His power and influence are fading, and he doesn't know how to reposition himself in a changing world. Eastman is not a bad man, but that doesn't mean his suffering needs to be prioritized over anyone else's. What Gilvarry does in this incisive, darkly funny novel is make that clear, and, in the process, beautifully sends up all the common perceptions we have of what it means to be a male artist, and how those ideals, however compelling, should never get in the way of being a human.

Do you ever start to, you know, hate the internet and every terrible thing it’s brought into your life, like the tweets of Donald Trump and, I don’t know, Facebook? Same. Me too. But then, if it weren’t for the internet, I wouldn’t have been introduced to the strange delight that is the voice of Chelsea Martin, who first came to my attention thanks to the internet (obviously), which is where I happened upon a piece she wrote for Motherboard about trying to cure her acne by dousing it with her own urine every morning. (It both did and didn’t work. Anyway.)

This collection of essays does not involve much pee-play, but it is a similarly candid, often hilarious look at Martin’s own life, dating back to when she was a young child who mistakenly thought she’d had sex with her similarly-aged cousin. (We’ve all been there, right?) Part of the beauty of this book is that Martin is brutally fearless in how she depicts many of the... if not ugly exactly, then at least banal parts of growing up; those times when you feel like you might just be one of the aliens you’re fervently hoping will stage an invasion in your neighborhood. (They’ll know it’s yours because of all the houses covered in toilet paper, courtesy of… you.) Though Martin is undeniably strong at chronicling the general feelings of ennui and malaise that afflict her generation, finding no topic too insignificant to dissect, she also delves into far more difficult parts of her past, like her relationship with her long-absent father, whose return into her life is the very opposite of comforting. (A restraining order is explored, but ultimately abandoned.) Perfect for anyone who has ever hated, loved, and laughed at themselves—particularly if they’ve done those things all at once—Caca Dolce serves to let all the weird millennials out there know that they’re not aliens at all, they’re actually normal. It’s the world that’s strange. Now, let’s go cover it in some T.P. —This review appears in NYLON's September issue