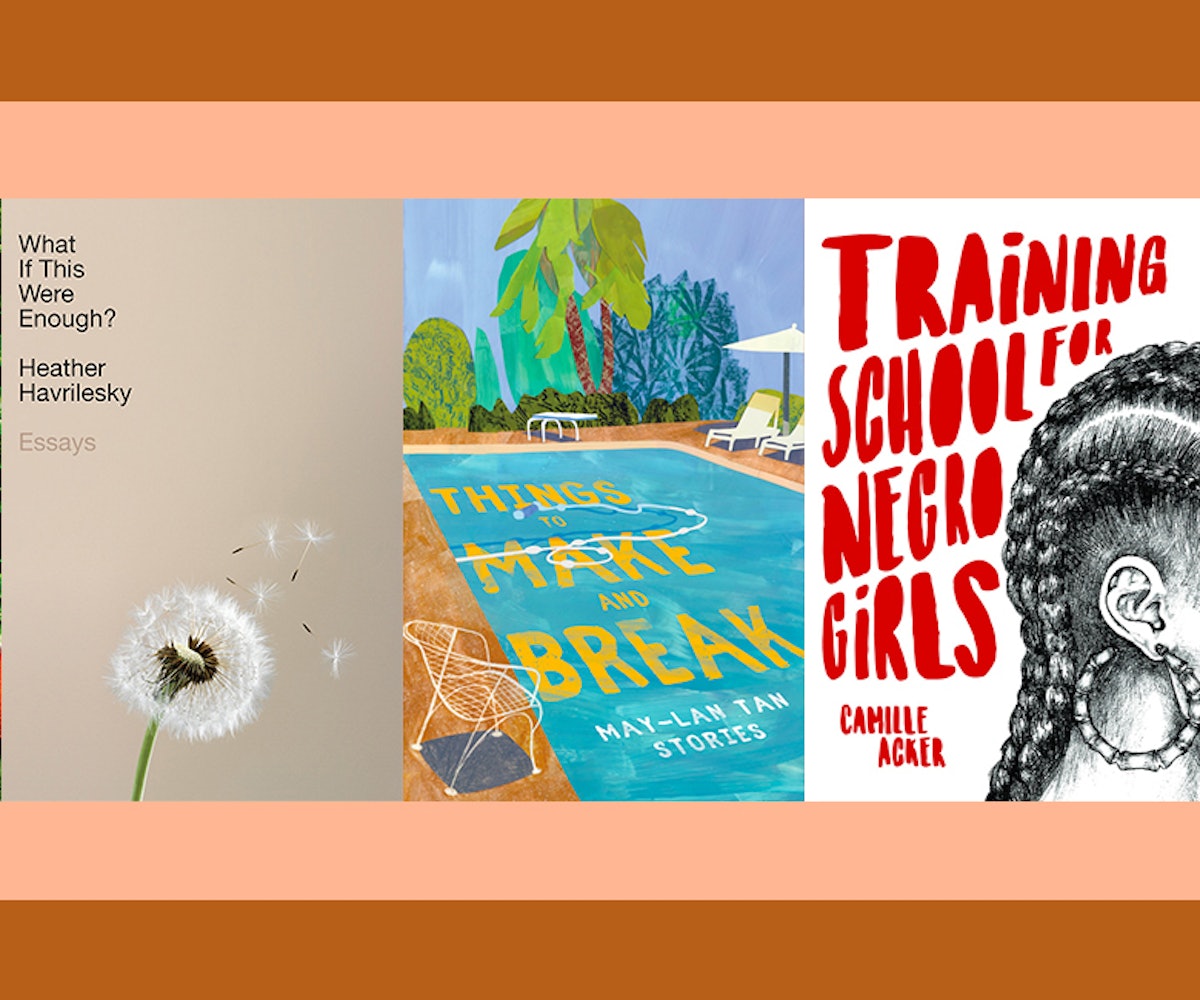 The world feels bad, but books can distract you from that. Or, if not distract you, at least remind you that your bad feelings are not yours alone. Many other people feel bad and mad and hopeful and exhausted and anxious and joyful, and so, the point here is, you are not alone in feeling things. It is important, sometimes, to be reminded of that.

Anyway, here are some of the very good new books to read this month.

All You Can Ever Know: A Memoir by Nicole Chung (available October 2)

For so many of us, our identity is inextricably tied up with that of our family and our family's history. For Nicole Chung—born in Seattle to Korean parents, adopted as an infant by white parents, and raised in mostly white, rural Oregon—identity was not implicitly understood, it was a constant questioning and navigation of experience and foundational myths, a search for an elusive truth, and a realization that "truth" can be more than one thing. With clarity, grace, and no small amount of courage, Chung has written a powerful memoir about her experience as an adoptee, an Asian-American, a daughter, a sister, and a mother. All You Can Ever Know is a candid and beautiful exploration of themes of identity, family, racism, and love. And while the answers Chung finds in her search for the birth family she never knew are fascinating, the power of this book lies in Chung's willingness to "question the things [she'd] always been told," even while knowing that she might find unsettling truths and an origin story unlike what she'd always thought had existed. Though this book is specific to Chung's experience and an important example of the complexities inherent to transracial adoption, its words will resonate deep within the core of anyone who has ever questioned their place in their family, their community, and the world.

What If This Were Enough? by Heather Havrilesky (available October 2)

It is more and more clear that we live in a time cursed with choice, tyrannized by abundance, thanks in no small part to the fact that the internet, and specifically social media, constantly reminds of how much is out there, and yet how much of it we don't have. Of course, it's not the internet's fault that we feel like salvation—or, at least, happiness—can be achieved through the accumulation of things, it's capitalism's! But the digital age has certainly amplified capitalism's message, to the point where it can feel as if we will always feel aspirational, we will never actually arrive at our goal. Depressing stuff, right? Right! But if there's anyone capable of leading a person out of the death spiral that comes with thinking too pointedly about our consumer-driven culture, it's Heather Havrilesky, whose insightful, diamond-sharp writing has been helping people navigate difficult aspects of their lives for years now, thanks to her rightfully beloved Ask Polly advice column. In What If This Were Enough?, Havrilesky mines our shared malaise in an effort to make it clear that it is possible to step away from the parts of modern life that feel like an escalator to nowhere. That she does so with unparalleled empathy and humor feels like a particularly generous gift, a reminder that we don't need to be looking five steps ahead or at what the people around us are doing, that sometimes this, right here in front of us, is enough—and so, in turn, are we.

A story collection designed to unsettle in the most incisive, breathtaking way, May-Lan Tan's Things to Make and Break is a razor-sharp example of the strange behaviors of human beings. Themes of twinning and doubles abound in each of the stories, and there's a violence to many of the narratives that can feel viscerally brutalizing. But who doesn't want art to hurt them a little? This book is for someone who seeks out excitement, even while they're aware of the pain that comes along with it.

"Shrill." "Hysterical." "Unhinged." These are all common ways that women are described when we sound even a little bit emotional, a little bit frustrated, a little bit angry. There's a double standard with the ways women's anger is treated that goes back to the very foundations of the patriarchy, and the dismissal of women's anger has been one of the most effective ways men have kept us—or attempted to keep us—silenced. In Good and Mad, Rebecca Traister explores the ways in which women's anger has fueled change in America, from the suffragist movement to the Civil Rights Era to women's liberation to the current #MeToo movement. It's a bracing, elucidating look at how transformative it can be for women to harness our rage, and how important it is to use that anger, that energy, for revolution.

It's hard to believe this brilliant collection of stories is a debut, so beautifully does Camille Acker navigate difficult fictional terrain and complicated themes, including issues like gentrification, race, and "respectability" politics. Primarily set in Washington, D.C., Training School offers insights into the times in life where we learn the truths that define our path forward, that make us who we are. Acker perfectly captures the varied experiences of her characters, refusing to offer up some easily digestible idea of what it is to be a black girl or woman, making clear that each of her characters' lives is worth exploring individually, and valued as being one shining part of the ocean of human experience.

After reading Claire Fuller's last novel, Swimming Lessons, it became clear to me that Fuller is a master of the quietly eerie; she's excellent at creating an aura of pervasive dread—and sustaining it till the very last page. In her latest, Fuller's done it again, with a tale of a hedonistic young couple who move into an apartment below that of a lonely woman. The relationship that forms between the three of them is dazzling at first, but all that sparkle belies darker truths.

That Was Something by Dan Callahan (available October 15)

For his first novel, Dan Callahan has written a compelling, propulsive look at obsession and desire and the ways in which it's sometimes easier not to mind when the two things become intertwined. Callahan, who has written extensively about cinema and its stars (including for NYLON), has set his narrative in late-'90s New York, a time that feels trapped in amber—dark and dangerous, full of blood and spit and all things viscous. The story follows Bobby Quinn, Ben Morrissey, and Monika Lilac (Callahan has a gift for names), as they navigate a dying nightlife scene and an era that was about to come to a close. It's a story about truth and lies, about what it means to be not a fake, but a real fake, and how we reconcile life's often absurd juxtapositions in an effort to make some sense of a deeply nonsensical world.

Kiese Laymon is one of the most dazzling, inventive, affecting essayists working today, and his memoir lives up to the dizzyingly high expectations set for it. In Heavy, Laymon explores his tumultuous relationship with his brilliant mother, what it meant to grow up as a fiercely smart, rebellious black man in Mississippi, and his trouble with addiction in various forms. Laymon is fearless in his willingness to go to the darkest, the most tender, the most raw spaces of his life, and of our shared lives in the fragile experiment that is America. His writing will shock and comfort you, make you realize you are not alone, and stun you with its insights about desire, need, and love.

It's October, so you might as well read something thoroughly haunting, the kind of tale that will stick with you, slinking through your brain long after you've finished reading. All to say, read Melmoth, the new, unnerving novel by Sarah Perry. Set in a wintry Prague, Melmoth introduces us to Helen Franklin, an English translator who is given a mysterious manuscript by a friend and fellow scholar. Its pages detail historical atrocities that share one thing in common: the ominous Melmoth, who bears witness to these crimes against humanity. Soon, Helen begins to sense the Melmoth's presence in her own life, leading readers to question what Helen's crime is, yes, but also the ways in which we are all complicit in furthering man's inhumanity to man.

In his stunning debut collection of short stories, Nana Kwame Adjei-Brenyah grapples with many of the most complicated, essential issues of today, from the evils of racism and capitalism to the ways in which violence and inequality are expected parts of life for so many people in America. Adjei-Brenyah's prose grabs you from the beginning and doesn't loosen its grip, as it takes you into the dark corners of the American experience, with a lyricism, dark wit, and palpable emotional weight.