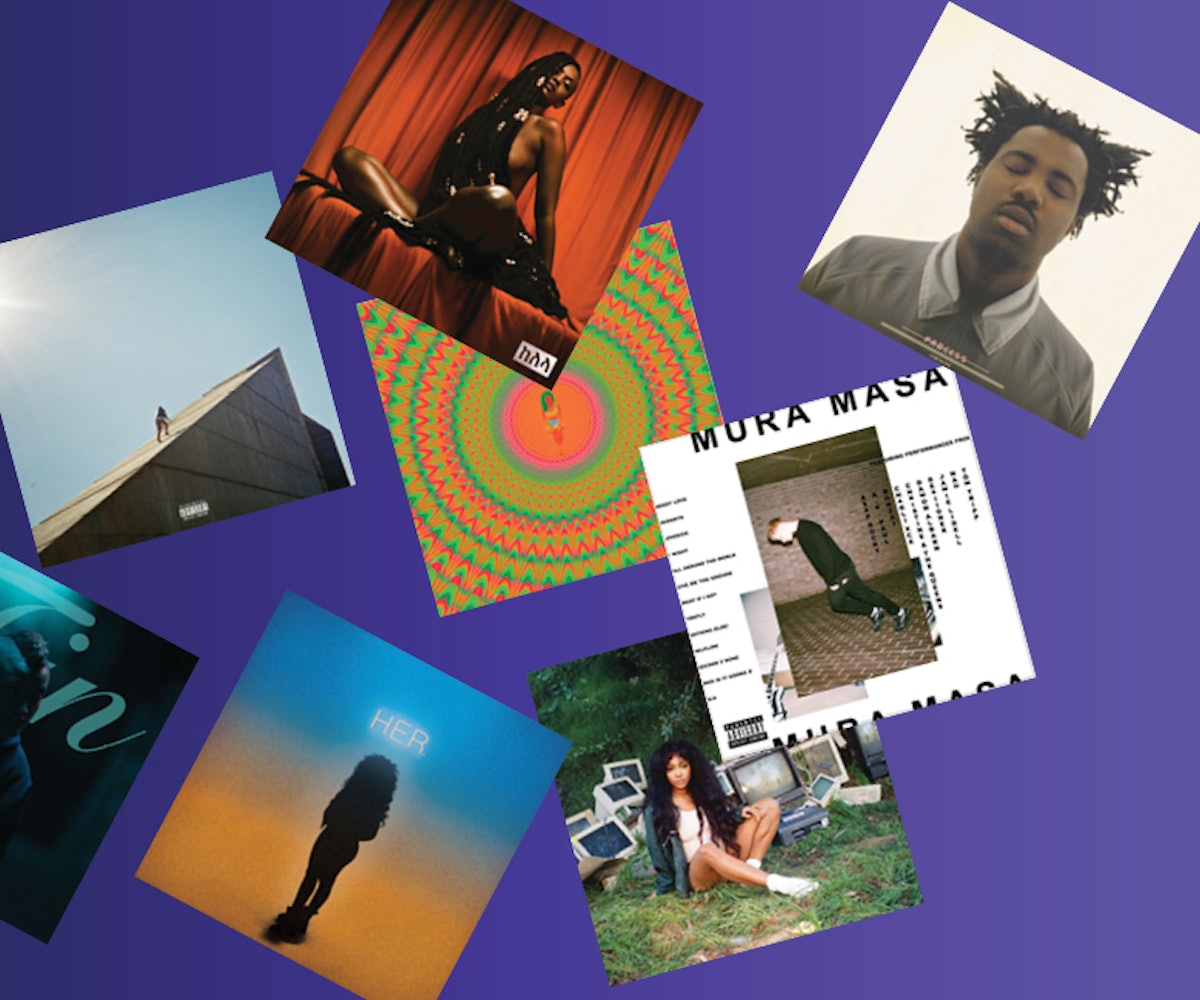 It was a good year to be an R&B fan. At its core, R&B will always baby-making music; it's what you put on while in the tub; it's wind-down music for the lovers. But we’ve been seeing a renaissance of artists who have brought in hints of pop, indie, and hip-hop to produce a sound all their own and stretch the idea of what R&B should sound like. The best part is, the majority of our favorite projects from this year are debuts. Meaning, there’s room for so much more growth and great music to come from the genre.

SZA’s debut album has made her the most nominated woman at this year’s Grammy awards. After teasing us with multiple EPs and appearing on some of the best songs from Rihanna’s Anti album, the singer has created a full body of work exploring love, sex, infidelity, and the confusion that comes with being a 20-something. The New Jersey native created a very specific, very intimate project that touched on things going on in her life, but the messages are universal. Would it be wrong to call hers the voice of a generation? We think not.

Kelela brings us sounds from the future, grounded in lust and sensuality, for her debut. It’s what we’ve described as a breakthrough album and it is that for both Kelela the artist and Kelela the person.

It’s easy to forget Sampha put out a project this year. The singer is soft-spoken in voice but also in the music space. It’s also easy to forget that Process is his debut album. He’d been releasing music under the wings of Drake, Kanye, and SBTRKT, but in 2017, the British crooner made a name for himself separate from the others. The result is a heartbreaking album about loss sometimes set to a trip-hop beat.

H.E.R. aka Gabi Wilson doesn’t like to be seen. Every picture you come across, on Twitter, Instagram, via a quick Google search, you’ll find the singer with her face obscured by her hand or completely out of view. She doesn’t do much publicity. She only just gave her face-to-face interview this past summer. The enigmatic approach isn’t new, but it never fails to add a level of mystery to an artist’s music. But, when you catch the attention of celebrities like Bryson Tiller and Kourtney Kardashian, coming out from behind the curtain is inevitable.

It’s okay if you hadn’t heard of Canadian singer Daniel Caesar before this year. We hadn’t, either. But with his new feature-filled album, he’s making it a point you don’t forget him. He sings with the sensuality of D’Angelo and the confidence of Prince—despite being only 22.

Drake has a type, and dvsn is it. The OVO R&B duo made up of Daniel Daley and Ninteen85, like their counterpart, manage to make heartbreak sexy and forgiveness sound tender.

Khalid earned himself a spot in the R&B-pop circle with the earworm track, “Location,” and safely secured it after touring with Lorde this past summer. His songs mostly speak to the teenage experience—“Young, Dumb, & Broke” comes to mind—but even if those youthful years are so far in your rearview mirror you can barely see them, the catchy hooks carried by Khalid’s leathery voice will transport you back to that time when your biggest worry was coming home smelling of weed.

This is technically a mixtape, but it’s a clear indication of the bright future Claudio has before her. The project ruminates on love and relationships and is by no means flawless. But there’s enough good to make us believe in her potential.

Our November digital cover star, Jhene Aiko created her psychedelic album after her brother’s death. It’s pretty obvious from the cover art alone that drugs were a big influence on the project itself, but they also played a part in the singer’s healing process. “Sometimes I would talk to trees and hear them say things back,” she told us. “But to me, it wasn’t a hallucination. It was me being open enough to receive what they really were. Hearing birds—it wasn’t them just singing, it was them communicating with each other. There was a real world all around me.” She treks through depression and self-medication and brings us on a trippy journey through darkness and into the eventual light.

This year, Syd broke away from her internet family and released a confident solo album that shows a budding artist’s versatility. It’s a promising start for what’s bound to be a fulfilling career.

Brent Faiyaz lent his vocals to Goldlink’s “Crew” before venturing out on his own. The 13-track project documents Faiyaz’s life growing up in Maryland and eventually pursuing his dreams in L.A. It’s an autobiographical album that balances the joy with the pain.

Mura Masa’s music can be labeled as electronic or R&B, depending on who’s featured on the track. For his debut album, his blend of ‘90s R&B, future bass, and hip-hop attracted the likes of Charli XCX, Christine and the Queens, NAO, and A$AP Rocky. It’s a little all over the place, but that fits into his approach. “I’ve always appreciated having a wide music taste, despite making what a lot of people would call electronic music,” he told us in an interview from the summer. “I think admiring songwriters from lots of different places musically really matures the music.” So, yeah, while the project could be lumped into a bunch of different genres, in the spirit of celebrating music that's expanding R&B’s boundaries, we’re going to keep it on this list.