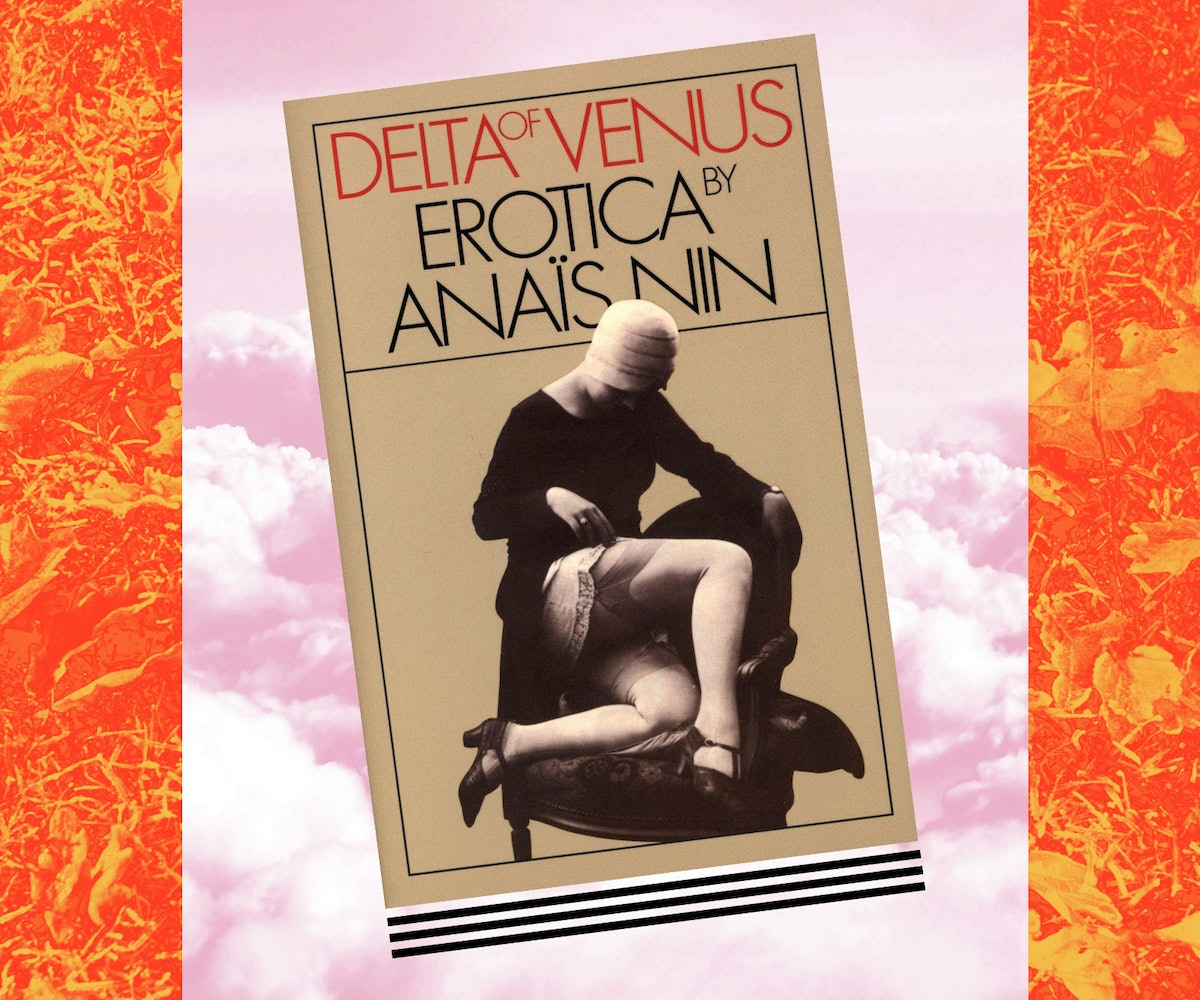 Most sex writing is notoriously terrible. For the most part, the reason we blush when reading a sex scene is not because we’re getting all hot and bothered, but rather because we’re embarrassed—for the author, for ourselves, for, like, literature.

And yet, when sex writing is good, there is nothing quite like it. We’re visual people, for sure, but there's also something specifically hot about textual turn-ons. It's a more comprehensive kind of sexiness; this level of heat has a certain kind of intelligence, and gestures toward the fact that arousal is a full-body—and that certainly includes the brain—experience.

This is the case, anyway, with the following books. All of them are worth reading for elements that have nothing to do with how sexy they are; the narratives are compelling, the writing is lucid. They also just happen to include the kind of words that make you blush in recognition of the fact that some of the best kind of reading is like the best kind of sex—a full mind and body meld.

This book has plenty of straight-up, maybe-don't-read-on-the-subway-where-people-can-peer-over-your-shoulder sex scenes. Sample sentences: Nodding, he scooted closer and stuck his tongue as far out from his lips as he could manage, as though he'd just been dared to lick a metal pole in the winter. His eyes were open wide, visually taking in the target—he seemed to be worried that he wouldn't be able to find my breast if he closed them. I lowered my head and watched the pink-on- pink contact, my nipple beginning to glisten with Jack's saliva.

But then, also, this book is a brilliant satirical look at modern American female desire and a wild subversion of the male gaze. Nutting masterfully tells the story of a beautiful, predatory teacher named Celeste, her teenage conquest, and explores the limits that women are and aren't allowed to explore and exploit in our patriarchal society. Plus, that cover is pretty special.

A Sport and a Pastime, James Salter

Simply put, there's no better understanding in literature of how immersive sex can truly be, how enveloping, how binding, than in Salter's slim novel. In it, Philip Dean and Anne-Marie Costallat have the kind of sexual affair that takes up every minute of their lives, one that seems to both expand time—forever suddenly becomes a concept that makes sense—and also stop it. Of course it's doomed, but then, isn't everything?

Oh, and also, Salter is capable of releasing sentences like this into the world: "With a touch like flowers, she is gently tracing the base of his cock, driven by now all the way into her, touching his balls, and beginning to writhe slowly beneath him in a sort of obedient rebellion while in his own dream he rises a little and defines the moist rim of her cunt with his finger, and as he does, he comes like a bull."

Nin was a pioneer in the field of woman-published erotica, and there's little doubt why when she can compose sentences like this: "Naked now, he lay his full length over her. She enjoyed his weight on her, enjoyed being crushed under his body. She wanted him soldered to her, from mouth to feet. Shivers passed through her body."

Or: "Only the united beat of sex and heart together can create ecstasy."

Nin's book touches upon all sorts of different sexual endeavors and adventures, but she does so with a sensuality that is at times delicate and at times blatant, but never less than entrancing.

Nelson's book is about many things, including love and identity, and motherhood and partnership. It's also about the brutality and coarseness that we can experience sexually, even while in the midst of the purest types of love, the ones centered around building a home and a foundation together. Nelson recognizes that love is a spell—it's a form of magic—while sex is the antidote to that; it grounds us, sometimes so deeply that it pushes us into another dimension. Like, the only way out is down and through, and down again.

Or, as Nelson writes: "Instead the words I love you come tumbling out of my mouth in an incantation the first time you fuck me in the ass, my face smashed against the cement floor of your dank and charming bachelor pad."

Sex and love and love and sex. It's all tied up into one—tied up and left for the taking on a dank, cement floor.

Kushner's brilliant novel proves how adept she is at creating a world that seamlessly intertwines pure fiction with historical fact, thus creating a sort of alt-reality we can't help but wish we lived in. Further proof of this alt-reality is that, in Kushner's fictional universe, it's the woman who gets a hand job, not the man: As we continued to watch the movie he began to unbutton my skirt. One button at a time, slowly, methodically, with no hesitation. He knew how to unbutton buttons. There was no fumbling, which was part of why I couldn’t find the courage to say, “Hey, what are you doing?” The other reason I couldn’t find the courage to stop him was that I didn’t want him to. No one was in our row, or behind us. My skirt unbuttoned, he took off his coat and placed it over my lap, chivalrous and careful. His hand slipped under the coat that covered me, and found its way through the unbuttoned skirt. He pressed his warm palm firmly against my underwear. I looked at him. He looked straight ahead... When my body began to tense, his hand understood and slowed itself down, its rhythm matching mine.

How refreshing. How fucking hot.

Franzen gets made fun of a lot for many things, and his bad sex writing is one of them. And, look, I don't think all of Franzen's sex writing is great. Much of it is pretty mediocre or even bad. But in Freedom he created a really honest portrayal of how young people (in this case, the characters Joey Berglund and Connie Monaghan) talk about sex when they have no inhibitions, and completely abandon all pretense. In other words, things get really dirty. And they get really dirty! Connie talks about wanting to fuck Joey with her clitoris, and Joey fantasizes about Connie's shit tasting like chocolate, and, look, this is all stuff that's easy enough to laugh at, but also, if you can't get creative and gross when having—or at least talking about having—sex, than what are you even doing with your life?

Morrison's Sula is an incredible novel about friendship, love, fetishization, betrayal, sexual freedom, and identity. The central relationship between Nel and Sula is one of the great love stories ever committed to the page. Throughout the book, sex plays a central role, and the value of a woman's body, of a woman herself, is a major theme. And, not to be base about it, but this means there are some pretty amazing sex scenes. To wit: He liked for her to mount him so he could see her towering above him and call soft obscenities up into her face. As she rocked there, swayed there, like a Georgia pine on its knees, high above the slipping, falling smile, high above the golden eyes and the velvet helmet of hair, rocking, swaying, she focused her thoughts to bar the creeping disorder that was flooding her hips. She looked down, down from what seemed an awful height at the head of the man whose lemon-yellow gabardines had been the first sexual excitement she’d known. Letting her thoughts dwell on his face in order to confine, for just a while longer, the drift of her flesh toward the high silence of orgasm.

This short story collection by Gaitskill includes one which was the inspiration for the film Secretary (which, watch it), and are as subversive as they are straight-up titillating. Gaitskill's excellent writing engages us on an intellectual as well as visceral level, which we personally think is an essential component of the most profound type of sex writing anyway.

To love Yuknavitch's writing is to love the extreme. Whether she is writing about art, violence, or emotion—any kind of experience, really—she handles it in such major keys that it sometimes feels unbearable to witness, even from the distance of being a reader. Sex is no exception. In Yuknavitch's work, sex is bound with art, violence, and wild emotion, and the writer exposes her characters—and her readers—to the darkest of places imaginable. But, as one of Yuknavitch's young, traumatized characters says about the art she's created: "Such images make me a different kind of alive." That's how we feel reading Yuknavitch's sex scenes; a "different kind of alive."

What Belongs to You, Garth Greenwell

Greenwell has written one of the most promising debuts in recent memory with What Belongs to You and in it he explores the complications around taboo sexual relationships in a frank, yet lyrical way. Set in modern Bulgaria, where gay relationships are still culturally forbidden, Greenwell opens the novel with a scene of a gay man cruising in a park in Sofia, and continues on to grapple with the unsettling, at times even sabotaging, effects that an imbalanced sexual relationship can have on the people involved. It's a masterful work, and clearly demonstrates how tied together sex and love and identity truly are.