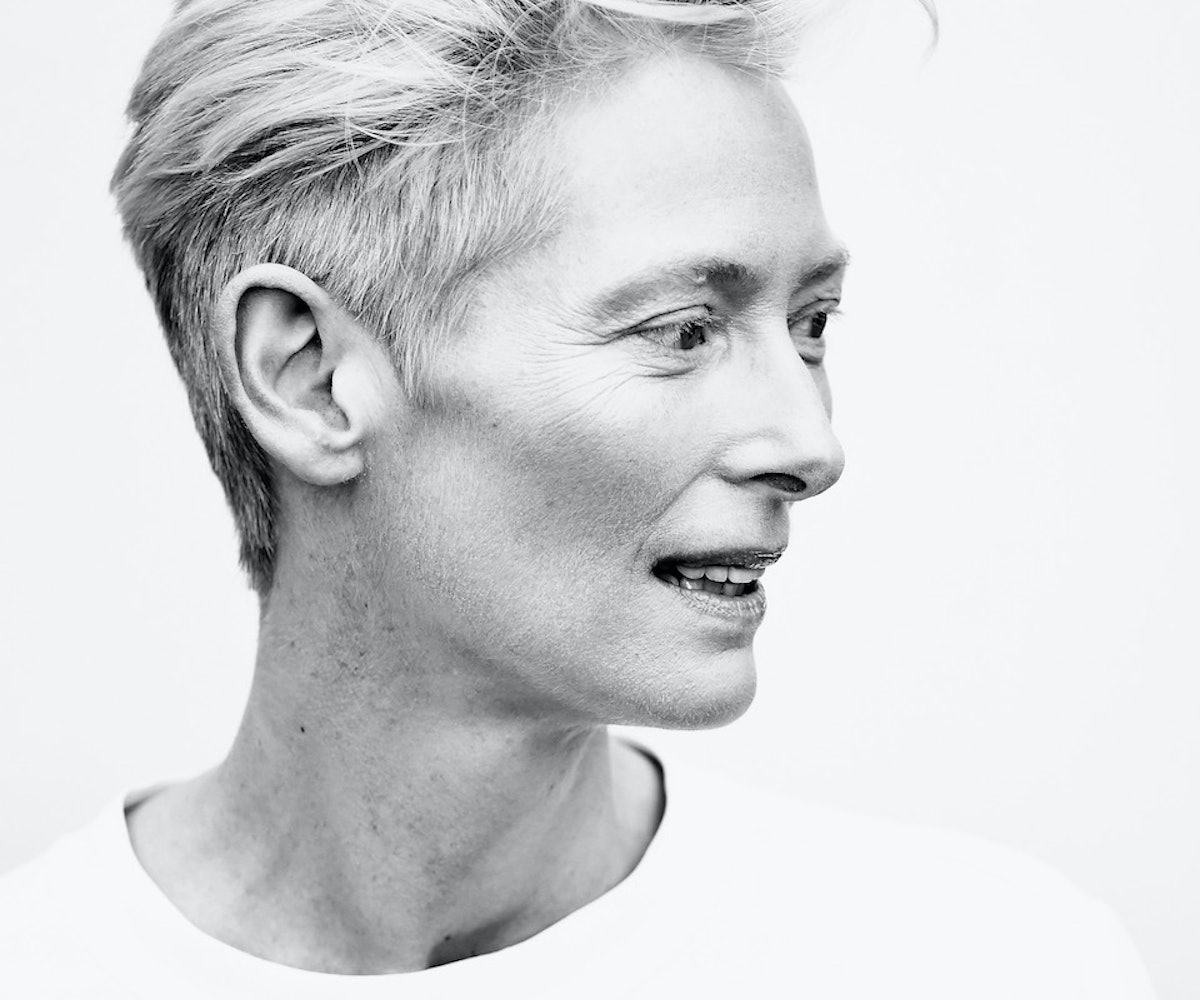 To define actress and performance artist Tilda Swinton is an impossible and futile task—though that doesn’t mean we don’t love trying. A magical elf priestess arrived from a magical land created by C.S. Lewis, Swinton can be whoever and whatever the occasion calls for: An alien goddess, a neoclassic absurdist, a mysterious pagan queen, a terrifying corporate mogul, a gender nonconformist fashion icon, and so very much more. Tilda is large, she contains multitudes.

Between dancing with the absurd and delighting in the bizarre, Swinton takes time out to make us all rethink the meaning of fashion, expression, and gender. She’s a beacon of creativity, uniqueness, and self-expression in a world of fillers and clones—a powerful ball of odd, unpredictable energy.

In saying all this, there is really only one way to describe the glory that is Tilda Swinton: She’s highly Tilda and just very…Swintony.

When she was in a glass box

Swinton (with producer and friend Joanna Scanlan) developed a performance piece, The Maybe, in which she encased herself in a rather luxe glass box on display at the Museum of Modern Art in New York. This is, truly, exactly where she belongs (well, that is, if she can’t be everywhere at once).

Whenever she collaborates with Tim Walker

Primarily appearing in W Magazine, any time photographer Tim Walker and Tilda Swinton get together, we’re all bound for a good and bizarre/breathtaking time.

When she worked with Hussein Chalayan

The designer famed for creating the “flying dress” seems like an appropriate creative collaborator for Tilda. In a film made for the Venice Biennial, she constructed 3-D sculptures based off the DNA of three anonymous women while whispering sweet, absurd poems about nature. Brilliant.

When she multiplied like amoeba into an army of Tildas

For one of their 2003 shows, design duo Viktor & Rolf tapped into Swinton’s previously unknown powers of asexual reproduction and sent a crowd of Tildas down their runway. What’s better than Tilda Swinton? Only more Tilda Swintons.

Whenever she bends gender

Look, Swinton bends gender just by waking up in the morning. But sometimes, she captures it so perfectly you have to stop and applaud inside. Perhaps the best example is this sentence she offered W magazine: “I would rather be handsome for an hour than pretty for a week.” Gender, bent, y’all.

Long have many suspected that Tilda Swinton and the late legend David Bowie were the same person. We mean, just look at them! Yet, despite appearances, it was all an illusion—one, the two played with in Bowie’s video “The Stars (Are Out Tonight).” Bowie became Swinton, Swinton became Bowie, mirrors reflected mirrors, and the universe still somehow did not collapse.

When she became a very handsy coatroom attendant

During the men’s shows at Pitti Uomo, Swinton offered up the performance piece, Cloakroom, where she did so much more than check coats. No, Swinton got up close and personal inspecting guests’ garments, sniffing them, pulling them, examining them, jumping on the table with them. It was very Swintonian.

When she cloned herself into sex vampires

In 2002’s Teknolust, Swinton plays a computer scientist named Rosetta Stone (get it?) who has invented three color-coded cyborg clones of herself: Ruby, Olive, and Marinne (all played by Swinton, natch). The trio survives on a strict diet of semen. We wouldn’t have it any other way.

When she led a dance along in honor of Roger Ebert

When Jean-Baptiste Mondino captured the true essence of Swinton

A marionette drenched in sand. Obviously.

When she became the worst person, ever

In Snowpiercer, Swinton took on the bearing (and the teeth) of basically the most awful thing that we could ever imagine—a self-righteous, nagging middle manager who also has the option to freeze your arm off whenever you don’t happen to meet goals. It was monstrous and glorious at once.

When she was in Trainwreck

NEXT UP
Culture
The 2023 Oscar Nominations Full List Is Here
Culture
The Madonna Biopic Is Being Scrapped
Culture
Kaia Gerber Won’t Stop Until She’s Cast As Patti Smith In A Biopic
Culture
Marie Faustin Loves To Waste Men’s Time
Style + Culture, delivered straight to your inbox.