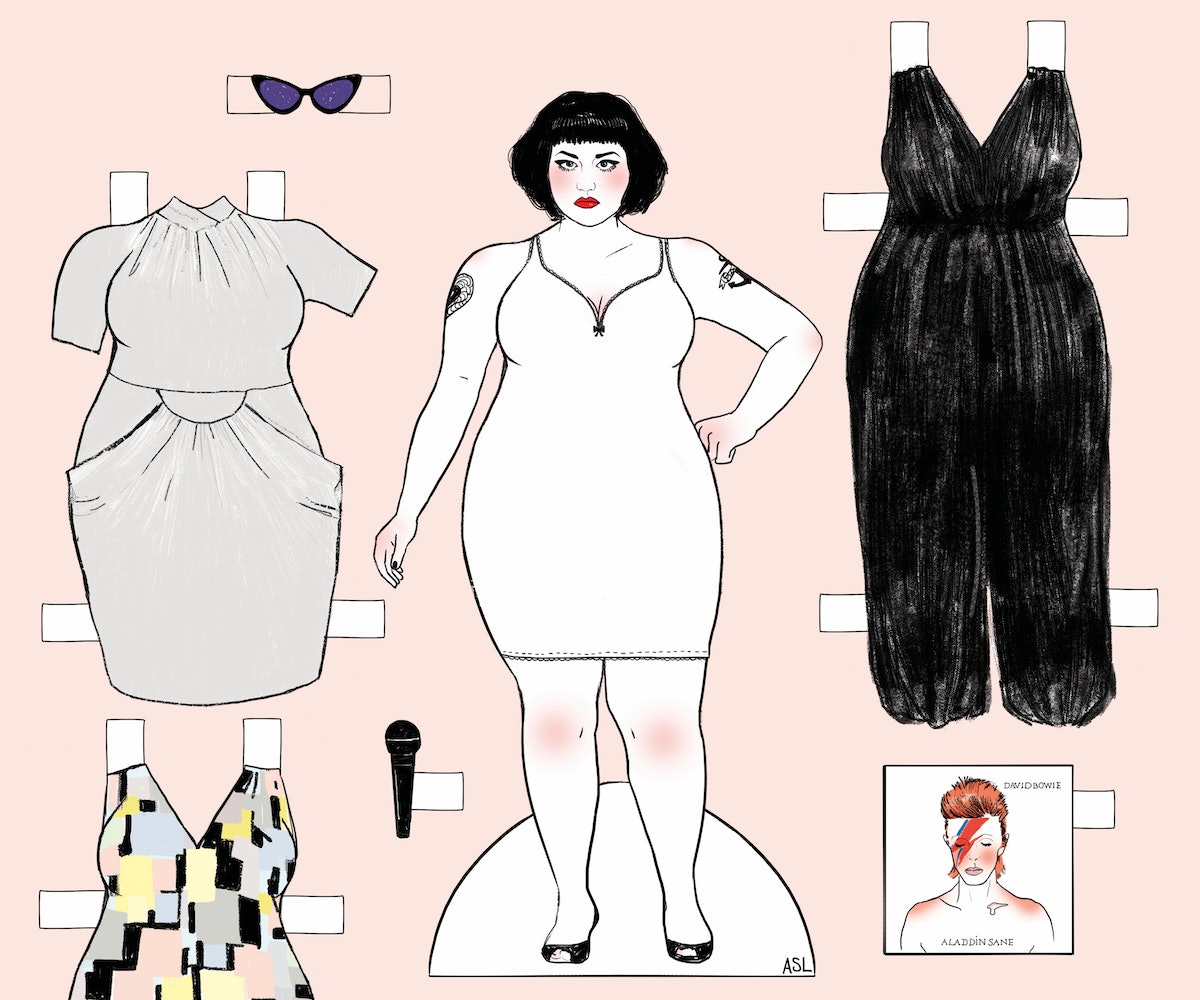 Over a decade ago, I first encountered Beth Ditto in her video for “Listen Up!” with her then-band Gossip. Initially, it was her deeply soulful voice that drew me in—but the moment she hit the screen, devouring a pizza as she sang to an adoring all-girls listening party, I was mesmerized. This was clearly a new class of diva. From early on, Ditto has always had a very punk-rock way of pushing the envelope, but in an approachable, almost down-home way. And while she was busy becoming an international music sensation, something unexpected happened: Ditto also became a fashion muse. Ruling catwalks and appearing at fashion shows across the globe, Ditto has shown that beauty and style aren’t one size fits all. Recently, she and I had a little text-message catch-up about her recent clothing collection and beyond.

Beth Ditto: Oh my god sorry I missed your text, J! I took a nap because I am old! And only just woke up!

JE: So first things first...the fashions!!! You are no longer a collaborator but have jumped in fully as a designer. How did this collection come about??

BD: It was really about timing for me. I had wanted to do it for years. Gossip was officially over and I finally had the time and space to take something on. So I said to myself that now is as good a time as any!

JE: Ha! #moms...So, when I came by to see the collection you were telling me just how deeeeeeply involved you are in this process. This ain’t no “slap my celeb name on some shit to make a buck.” You’re part of the process all the way through?

BD: Aw! I’m so happy you came! This is a baby! A brainchild. I mean, I’m so involved that we are having trunk shows, which is pretty hands-on, old skool! I got to tour the factories, meet the pattern maker, talk through every detail…. Plus-size clothing has come a long way as far as options. I knew that someday it would happen where major companies would catch on. And while that day is both validating and equalizing by social standards, I didn’t want to see this movement get out of the hands of the people who worked so hard against this beauty myth. So I did the only thing I knew how to do, which was do it my damn self.

BD: Always Peggy Moffitt, David Bowie. Especially the Yohji Yamamoto era. My biggest influence was the body actually—using what I know firsthand and applying it.

JE: Have you seen any girls IRL wearing your collection yet?

BD: I have at the trunk shows.

BD: Yes, very! Seeing them on the hanger cannot do them justice. Pieces for bigger bodies need more than a hanger. They need to be filled out! There’s one dress I specifically call BAD-ON-THE-HANGER,

but best on the body for sure!

JE: I’ve seen that dress come alive on one of your models and it really is incredible. The BUTT it gives!!

BD: It’s amazing! And I love the jumpsuit because it can be this sexy see-thru piece with a belted waist or it can literally look like a wet trash bag in the very best Debbie Harry, Poly Styrene, weirdo glory! Versatility is key.

JE: You mentioned that this all happened when Gossip came to an end. What was that like for you? Bittersweet? Was it time?

BD: Gossip ending was and still is bittersweet. I love both my bandmates. I mean, we had seen the world together and created this amazing ride. I miss them both on a daily basis, but I had been doing it since 1999 and I just needed something else.

JE: What have you been up to musically since you’ve gone solo? Have you recorded or are you still writing?

BD: I’m now finally at the end of the writing process! Almost ready to track!

JE: I find your writing to be very personal. Do you sometimes find it hard to perform songs you’ve written because they bring you back to “that place”? Songs like “Love Long

Distance” and “Coal to Diamonds.”

BD: Usually when they do I leave them off the record. But for the most part I don’t know until later what the song is about, it almost always dawns on me later when I’m not thinking about it. The way I write a song is the words and the melody almost ALWAYS come at the same time for some reason. It’s always off the top of my head. But I’m so happy you like the sad ones…because so do I! Sad songs are my favorites. And I don’t care who…any singer loves the ballad.

JE: Well I’m a Smiths superfan since childhood so a sad song is the only song as far as I’m concerned.

BD: HAHAHAHA I AM EXACTLY THE SAME.

JE: Get that pain out, girl. Sing that shit right out.

BD: HAHHA I agree. The evidence is, watch a room when “This Charming Man” comes on. People lose their shit! Or “There is a Light That Never Goes Out”???!! People loooose it.

JE: (“How Soon Is Now?” is now my ringtone :P) Whatchu got on heavy rotation these days?

BD: I’m listening to so much Paul Simon! Cate Le Bon, the selector, and Loretta Lynn.

I want a ringtone!

JE: You can make Aaliyah your ringtone….

BD: She is so amazing. I will now.

JE: Are there any dream duets you’d like to make happen...or cover tracks? I noticed that people are always trying to get you to cover Alison Moyet songs. (I love when you write “I wanna hear YOU sing Alison Moyet.” Ha!!)

BD: HAHAHAHHA I would like to maybe sing with a crooner? [Michael] Bublé? Sturgill [Simpson], the country singer? If I could do a show of all covers that would be a dream show.

BD: Someday. When Kristin and I retire and I become a lounge singer in her home state of Hawaii!