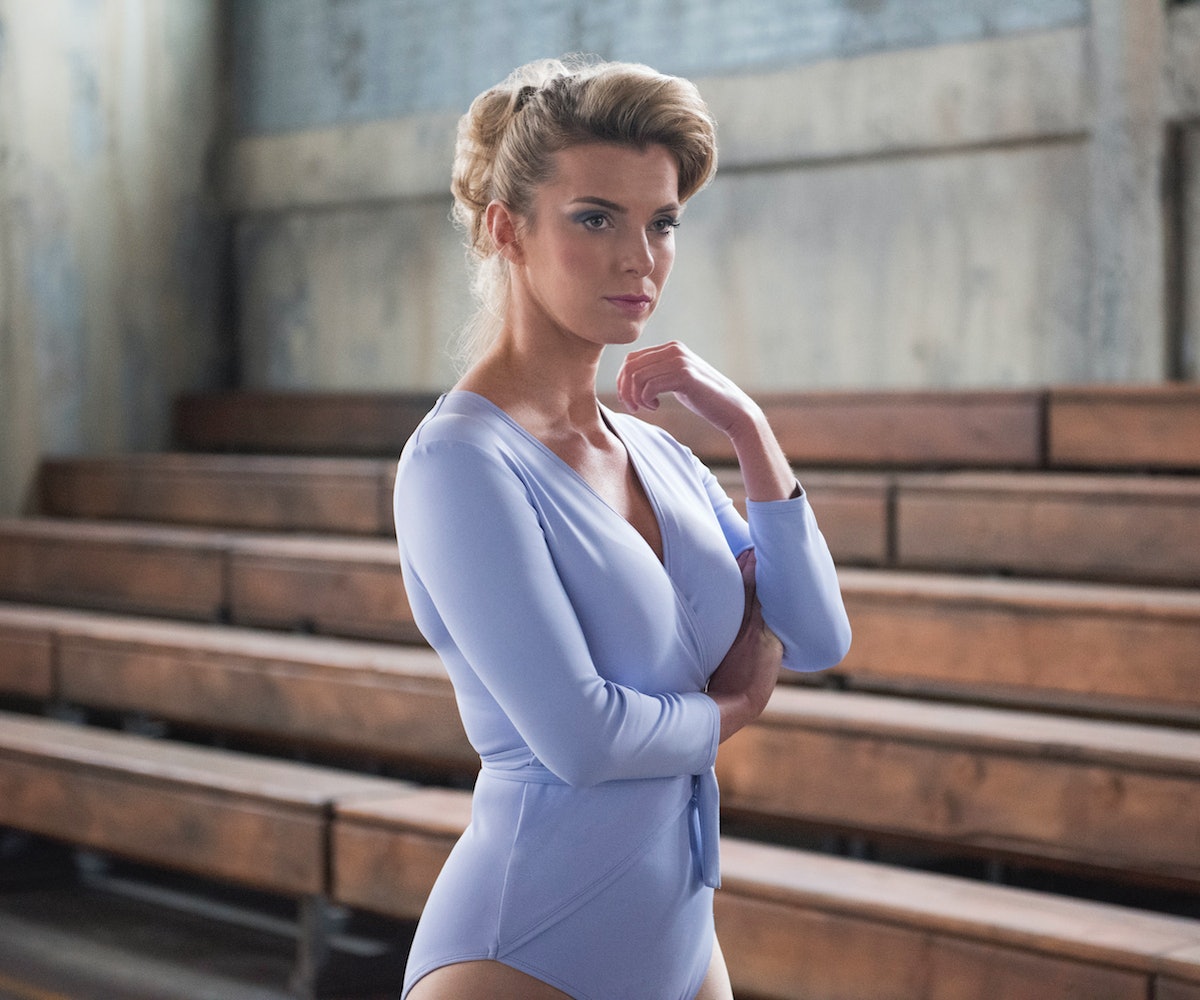 Betty Gilpin recognized Debbie Eagan, the character she plays on Netflix’s new comedy series GLOW, all too well. A fading soap opera star balancing a stagnating career with an unfaithful husband and infant son, Debbie enlists in the Gorgeous Ladies of Wrestling program to make ends meet. Gilpin’s got much more of her shit together than Debbie—she does double duty in 2017 with a role on American Gods, and recently contributed key supporting work to Elementary and Masters of Sex—but the memories of frustration, discouragement, and industry sexism aren’t too far off. She approached GLOW as a prime opportunity to live a little bit of truth in an industry built on fakery but stumbled into a far more therapeutic and personally developmental experience than she had ever imagined.

Over the course of a phone call, as she strolled through downtown Brooklyn, New York (hanging up only when the time came to chew out a streetside catcaller), Gilpin recalled memories of her worst auditions, dying twice on Law and Order, and falling in love with herself while learning to body slam.

Would you be willing to share any of your own audition horror stories?

There was one where I was testing to play the crazy lesbian neighbor on a multi-cam, Big Bang-esque comedy. It was me and four other girls, testing all day in a room full of, like, 20 men who weren’t laughing. It felt horrible. Then, they weirdly came out and told all of us to go home. The five of us got in the elevator, the doors closed, and immediately four of our phones rang. I answered, and a voice said, “Stay in the elevator.” The elevator doors opened, and the one girl got off. She turned back in horror, and the doors closed again, with us still holding our phones to our ears. They made us tell her that she was out. It was just horrible, and then they didn’t cast any of us! There are many, many more. Heartbreaking.

Well, then what about one more?

Let’s see. There’s a tape that exists of me auditioning for Aliens vs. Predator 2. The whole thing is me, miming disrobing by a pool and looking up to see the alien, and then a second take, where I disrobe and look up to see the Predator. And I was supposed to act differently enough that you could tell the two apart.

But is that the norm? Or do you usually walk out of auditions feeling like you crushed it?

Sometimes my instincts are the reverse of what reality is. I’ll walk out of an audition like, “I nailed it.” I’ll call my agent asking, “Let me know if there’s any feedback, but I’ll see you on set!” And then the feedback will be, “What happened in there?” Total opposite. Sometimes when I think I totally bombed and I’m sobbing in my car, that’s the role I get. I’m mystified by the process.

I hear that auditioning and dealing with the rejection is the toughest part of being an actor.

It feels like it’s conducive to only one type of personality, too, the person who walks in and can go, “Here’s a soundbite version of who I am, a person I love and am able to put in a capsule for 10 minutes!” That’s not representative of what people do on set, or what people would do if they got the job. It’s a strange experience.

What sort of person do you consider yourself to be then?

I don’t know! I feel similar to the kind of people who become politicians. The two personality types there are—the kid standing in the center of the playground wanting all the attention, or the weird kid off to the side of the playground taking notes on human behavior. That kid grows up, and is like, “Here are my notes from being an outsider!” I feel like I was the latter. Both of my parents were actors, mostly stage actors, and theater is a place where that kind of kid can really shine, and not have to pretend to be the other kind of kid. Right now, I feel like I have to pretend to be the other kid when I’m on red carpets. It still feels foreign, strange, and altogether separate from why I became and actor.

Do you see yourself getting to a point where you feel more acclimated and everything isn’t so surreal?

I think it’s always gonna feel kind of surreal. People who it doesn’t feel surreal for, I worry about sometimes. I see it as sort of the toll you have to pay to get to the kind of work you want to do. If that means better roles and more challenging opportunities, then I’m willing to put Benjamin Moore paint on my face and my hand on my hip and grin through an evening.

Then GLOW would be one of those opportunities, yeah?

Exactly. It’s a lesson in self-worth that I never even dreamed could exist. Up until the past couple years, I’ve felt like plays are where I could feed the weird monster actress side of me, and TV is where I would get health insurance. Like, “If I gotta give up some dignity, fine.” But I didn’t think that I could be the weird monster side on TV, I guess. For this, I was using all of myself, from my scalp to my toes. It feels so fucking amazing. I learned so much from the experience of working with 13 other women—it’s a completely different environment than I’m used to.

How similar was the process of making GLOW to the behind the scenes of the GLOW of the show, where everyone’s living together and training together 24-7?

Normally, a set is the opposite of that. You’ve got to prepare the final product of what you’re going to do alone in your apartment, then you show up on set and you use whatever you’ve come up with in your bedroom. Because we started with wrestling training, there was a square-one, bare-bones, no-bullshit feeling to the whole, and that bled into filming. It wasn’t about, “Here’s what I’ve prepared! I hope it’s right! Please don’t fire me!” It was about cracking open our ribs, spilling our guts to one another, and then grabbing each other by the butts and thighs so we can throw one another across the room. It’s the first job I wasn’t walking through in shame and the fear that I was doing it wrong. It was the first job where the people in charge were concerned with how I was feeling, how she and she and she were feeling.

That sense of positive affirmation and female solidarity is a major part of the show.

Absolutely. We all need to dispel the myth that there’s this type of woman and that type of woman. The idea of wrestling kind of plays on that; a wrestling character is a very specific black-and-white type, and anyone who’s ever met a woman knows she’s 100 different types of people in one, often depending on what time of day it is. And that’s a beautiful, scary, amazing thing. It also means that with every woman, there’s a way in, female-friendship-wise. It took me a long time to learn the lesson that the girl who has the organized purse and the right face serum also cries in the bathroom just like me, you, or anyone else.

We did a little over a month of wrestling training, and we trained through the four months of shooting. I thought they were gonna work us out so we could look a certain way, do the moves in a certain way. And it was really just "come as you are, learn the moves." As a cast, we’re all different shapes and sizes, but that had no correlation to our abilities. That was really freeing—it put everyone confidently in their bodies immediately, instead of feeling like, “I’ve got to hit a certain number before filming starts,” which is often what shooting a cop show is like. I think a lot of actresses feel panicked when they get cast in something—like suddenly you’ve got to lose five pounds and change the shape of your face. But for a show so centered around being physical, there couldn’t have been less body-shaming. I’ve never thought less about thinking about what I look like.

You’re on American Gods this year as well. What went into changing gears between those two wildly differing productions?

American Gods was a great stepping stone into GLOW. I turned 30 last year on the American Gods set, and something about turning 30 made me think, like, Maybe I’m not going to be so hard on myself and not trying the crazy things I want to try on set. I’m gonna take a big swing with this character, and maybe they’ll tell me to pull it back or make smaller faces, but I’m gonna go for it. Usually, I’d come up with something in my bedroom and think, No, that’s too outrageous, I’ll just do what I think that they want me to do. I didn’t do that on American Gods, and no one died, so I could go into GLOW with a new confidence. My voice in a room was not going to hurt anyone. It was actually a little powerful, I learned.

Looking you up, I saw you’ve done a Law and Order episode as well as an SVU. I feel like that’s kind of a rite of passage for New York actors.

Yeah, but I did four Law and Orders! I did Criminal Intent, two of what’s called “the mothership,” and then one SVU. Wait, maybe I did two Criminal Intents. Did I do five? Oh, who remembers? But I do remember saying to the Law and Order people when they were about to cast me for the second time, “You know, I died last year on this show.” And they were like, “It’s fine, no one cares.”