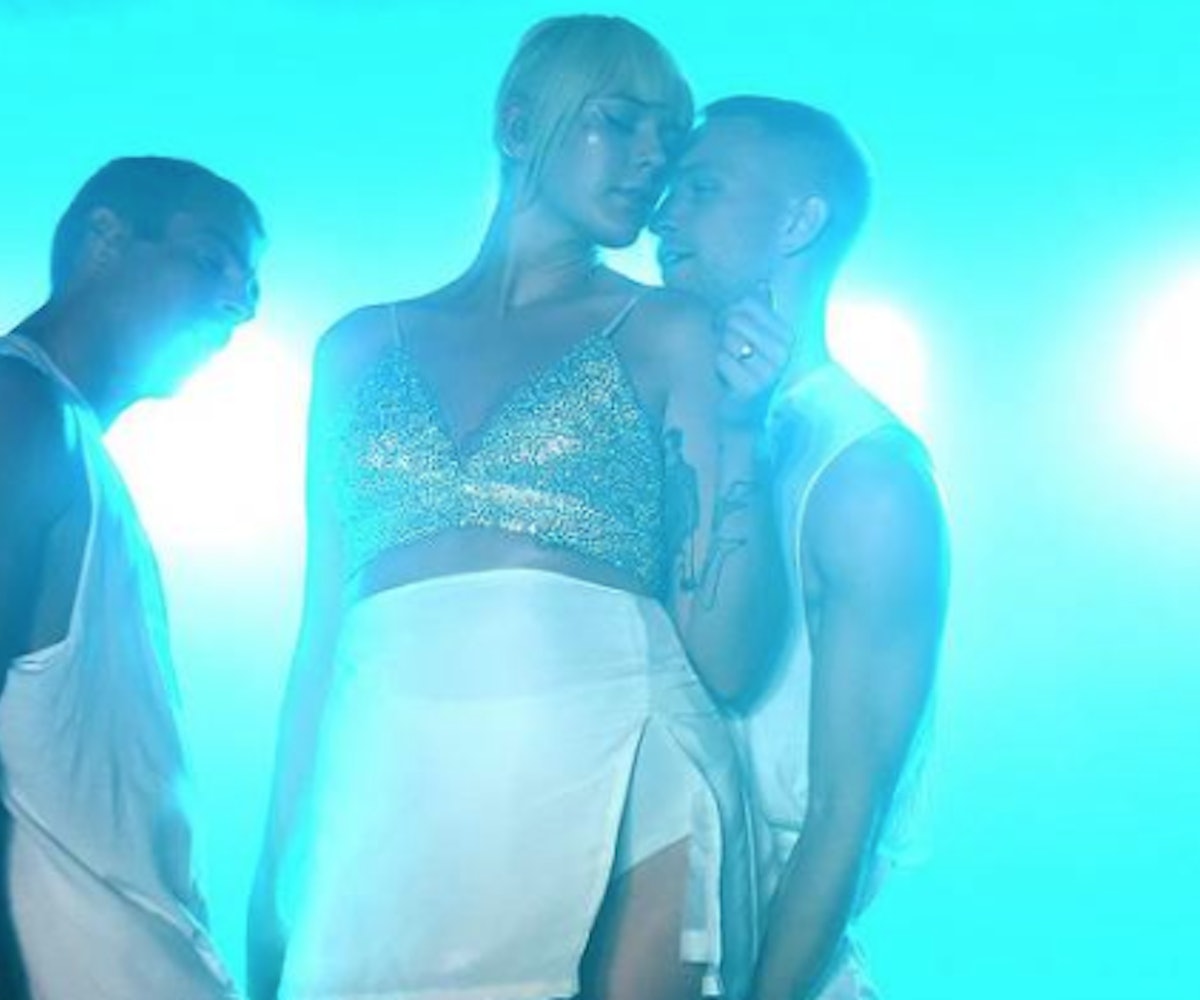 Ever since parting ways with RCA Records last year, Betty Who has had a lot to think about—and most of it has been quite existential in nature.

Though the 26-year-old has always fancied herself a self-assured individual, she's not immune to the same sorts of anxieties and growing pains that many other 20-somethings grapple with. After all, despite being a relatively well-known pop star, Betty is figuring it out just like the rest of us—the only difference is that her actions are scrutinized on a much larger scale. And though she may no longer have the backing of a major record label, she's also not about to let that stop her.

Because while it may be scary to put your entire self out there sans big label resources and support (on the World Wide Web, no less), Betty still believes her message of positivity and joy—especially in a world of so much darkness—transcends all the antagonism and absurdity that can be bred by the internet. And while some of the comments do give her pause, the fact that she will be able to release her first independent full-length album, unfettered and untouched by anyone but her, means so much more.

Granted, she's kept pretty quiet about the details thus far, though she did give us a little info about what she's been working on before her set at the W Hollywood's lavish Wake Up Call Festival. Read our Q&A with her, below, to learn more about her views on artistic integrity, how the internet can unite (and divide) us, and what to expect on her new album, Betty.

How’s everything been going since you went independent? Are you enjoying post-label life?

You know, it's good. I feel like every time I make a record, I have this weird slump of like, “What does it all mean? Who even am I? What am I doing here?” Maybe everybody goes through that though, because you're, like, stuck in the studio creating and you have no perspective on yourself or your worth in the eyes of other people. But that also isn't healthy regardless. So it's a really funny experience to sort of work through.

I was joking with my therapist about how I find that while I'm emotionally intelligent enough to be able to identify when I'm unraveling [from stress, which is normal], my logical brain is like, Oh, you're going crazy. And then I just lose it, and I'm like, “Well, I know I am [okay], I just don't know what to do about it.” So I think that's kind of been the theme of my album right now.

So the pressure’s on?

I think I feel like I really have to prove myself in this very new, intense way, because of my split with the label. It's the first time I've made an independent album. I put out an independent EP when I was like 20, but then I signed to RCA [Records], put out another EP, a record, another record, and then I left. And now I'm making this... It's not really a concept album, but it is much more intentional. It feels more like I'm making an album as opposed to a bunch of songs. I'm calling it Betty because it's the first time that I feel like I've actually gotten to make the record that I really wanted to make. But that's equally terrifying, as well as exciting and rewarding.

As a “more intentional album,” what would you say is the theme that loosely connects all the songs on Betty?

I think the things that I'm struggling with… or just kind of experiencing as a grown-up now. It's weird being an adult. I hate it. It's like this shift. But I think everybody at this exact age is like, “Oh, I'm a grown-up now and have to figure my life out?” That's really scary.

[Even as a successful person, I still] feel like the most lost and totally crazed. So I think a lot of the songs that I'm writing and the emotions that I'm trying to put on the record have a theme of “sometimes two things can be true at once.” One of my favorite songs—it is from the [Betty Pt. 1 EP] and will be on the album—is called "Just Thought You Should Know," and it's a song about missing somebody and thinking about them literally all the time. And you're not calling them to say that you want them back or that you need to hear that they love you too, it's literally just like, “I have these feelings for you, and I'm never gonna let myself live it down if I don't just tell you. I don't want you to do anything with it. I just need to tell you.”

That's brave though—just putting those kinds of truths that can exist in tandem out into the universe.

Yes. And I think a lot of the stories I'm trying to tell has a lot to do with [the idea that] it's not "either/or." It’s “and also.” There's a lot of “and also,” on the record. I feel like a lot of “and also” in my life too. I feel crazy, and also I feel really excited.

I feel mostly like I... Maybe I'll never finish the album because I'll be too afraid and also maybe it'll be the best album I've ever made, you know? There's a lot kind of up in the air for me right now. I've bet on myself in a very ballsy kind of way.

It's really cool to sort of reclaim your identity and your artistic integrity in that sense though. At the same time, I do know a lot of artists that are very comfortable with the terms and conditions—that stability.

Yeah…. When I left RCA, I said to myself and my manager, “I want to be the most successful independent pop star there has ever been.” That's been my goal for the last year. That's where I'm trying to head. I want to show everybody who wants to do this that it's possible.

But everybody that I know of who's been this independent kind of artist has had something else that got them there. There's this edge, but I'm also like, “No, I just wanna make pop music. I don't want to make a weird song with a weird tagline that's gross or dangerous. I just wanna make the songs that I want to make and be successful at that.” Is that so fucking crazy? I don't wanna have to terrify people into following me on Instagram or [peddle] shock value [gimmicks]. I'm not here to shock people. I'm literally here to entertain. I want to make music that makes you moved, that makes you feel something. I want to make pop music with good lyrics that gets you psyched.

Specifically in a positive way?

Yes, because there's so much shit in the world right now that makes everybody feel so bad about themselves—literally all the time. Whether it's being bullied on the internet or the fact that a fucking reality star is our president... All I want is for people to come to my show and feel like there is a reason that we're all still here. There's a reason to keep living your life and be happy and to have joy and not to feel bad about having joy. So much of the time, I feel like I'm happy, but there's so much hate and hurt in the world that it feels really weird to be able to experience this and know that that's [valid]. But joy is joy, right? It doesn't matter what color your skin is, or how much money you have, or where you come from, what your family is like, the friends you have... And if something makes you feel like that, nobody can take that away from you.

It's a weird cultural shift that I think we're going through now... but I think because the internet has provided a space for people to be like, “Check yourself,” and it's like way too much.

Like we’re too self-conscious online sometimes? To the point where we err on the side of self-censoring?

Yeah, and also, like, not everything should be offensive. And when things get totally taken out of context, and then you get jumped on for it... I mean, it's never really happened to me in a large-scale way, so I feel really lucky, because it's my biggest fear. Literally, this happened to me the other day. I have a song where the lyric is, "Girl, I know you're broken-hearted, rip it out, and we'll restart it," and someone tweeted at the show: “Questioning all the choices that have led me to being at a Betty Who show and having her say the word retarded on stage.”

I literally spent like an hour feeling the most nauseous... I don't use that word, and everybody was like, “I listened to you on stage. You did not say that word.” But he misheard the lyric "rip it out and we'll restart it" as "retarded," and put that out into the world. It was getting retweets and an ex-publicist of mine saw it and was tweeting like, “I'm gonna text you in 10 minutes, I have to call you. This can't be true.” It immediately snowballed out of control. People have access to create drama at the touch of their fingertips with their phone now, so he tweets and doesn't think anything of it, but this could be really bad for me. You just accused me of something I didn't do! Actually, fuck you, maybe.

It's so scary because I just want to make everybody happy all the time. And everybody's human and… I don't know. I think there has to be a way that we come out of [all the negativity] and be like, “We're all fucking human, and no matter where we came from, I respect you.” It’s been, like, an eternity of oppression and not feeling like anybody can hear you or see you or understand you. And now the internet makes people heard and seen and understood. But we've gone all the way to the opposite end of the spectrum. It’s now like, “You could never understand me.” But I hope that we come back to the middle where we go, “I'm a human just like you. And just because I came from somewhere else that you came from doesn't mean that I don't respect you.”