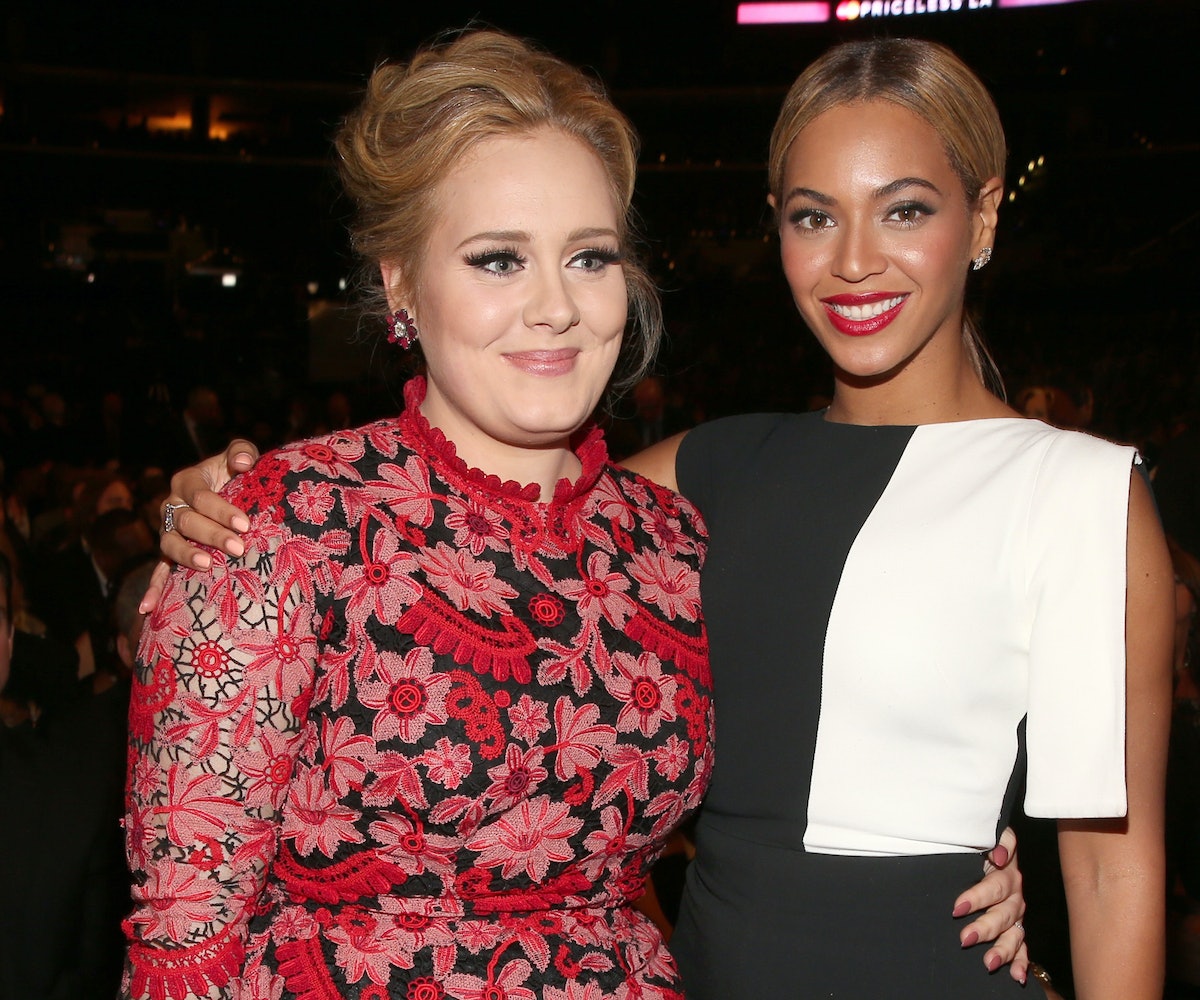 If the mandate for this year’s Grammy Awards was to pull in the widest television audience possible (and, of course, it was), then it looks like the voters have done their jobs. The nominations were announced this morning, and all anyone will be talking about in the lead-up to February’s ceremony will be the showdown between Beyoncé and Adele, who are both up for Album of the Year for Lemonade and 25. They’ll also face off in the Song of the Year and Record of the Year categories, which basically guarantees that this will be one of the most anticipated award shows of any kind in recent memory. It also helps that Kanye West, Rihanna, Drake, and Justin Bieber—basically the biggest stars in pop music—are all up for major awards.

Beyoncé will and should be the favorite for album of the year when the James Corden-hosted ceremony kicks off on February 12 on CBS. She has nine nominations (the most of anyone) to Adele’s five, and Lemonade—while not selling nearly as many copies as Adele’s 25—was a towering and career-defining artistic statement that is currently topping many year-end lists. Where Adele could have an edge over Beyoncé is in the song and record of the year categories, where “Hello,” maybe the most ubiquitous single of the decade, will be going against “Formation,” one of the most political songs of Beyoncé’s career.

Some other intriguing story lines to follow will be Chance the Rapper versus The Chainsmokers in the Best New Artist category—which is basically like a halo going up against a can of Axe Body Spray—and Kanye, Drake, and Chance all being up for Best Rap Album of the Year. Also, will the Grammys mark Kanye West and Kim Kardashian’s first public appearances since her robbery scare and his hospitalization? Also, that albums like Radiohead's A Moon Shaped Pool and David Bowie's Blackstar were relegated to the alternative album category, while Drake's Views and Justin Bieber's Purpose are both nominated for Album of the Year, proves once again that the Grammys are a popularity contest above all else. The full nominee list is below.

Mike Posner, "I Took a Pill in Ibiza"

Twenty One Pilots, "Stressed Out"

Twenty One Pilots, "Stressed Out"

Sia, This Is Acting

"Tearing Me Up" by Bob Moses

"Don't Let Me Down" by The Chainsmokers featuring Daya

Barbara, Barbara, We Face a Shining Future by Underworld

No Problem by Chance the Rapper featuring Lil Wayne & 2 Chainz

Coloring Book by Chance the Rapper

And the Anonymous Nobody by De La Soul

The Life of Pablo by Kanye West

Love Can Go to Hell by Brandy Clark

My Church by Maren Morris

Setting the World on Fire by Kenny Chesney & P!nk

Think of You by Chris Young with Caddadee Pop

Big Day in a Small Town by Brandy Clark

A Sailor's Guide to Earth by Sturgill Simpson

The Sound of Silence (Live on Conan) by Disturbed

Heathens by Twenty One Pilots

Shock Me by Baroness

Rotting in Vain by Korn

The Price is Wrong by Periphery

Tell Me I'm Pretty by Cage the Elephant

Death of a Bachelor by Panic! at the Disco

A Moon Shaped Pool by Radiohead

Turnin' Me Up by BJ The Chicago Kid

I Do by Musiq Soulchild

Needed Me by Rihanna

Cranes in the Sky by Solange

The Three of Me by William Bell

Sleeping with the One I Love by Fantasia

Lake by the Ocean by Hod David & Musze, songwriters (Maxwell)

We Are King by King

In My Mind by BJ The Chicago Kid

Up & Up by Coldplay

Upside Down & Inside Out by OK Go

The Girl with the Lower Back Tattoo by Amy Schumer

In Such Good Company: Eleven Years of Laughter, Mayhem, and Fun in the Sandbox by Carol Burnett

Live at the Apollo by Amy Schumer

Talking Over Clapping by Patton Oswalt