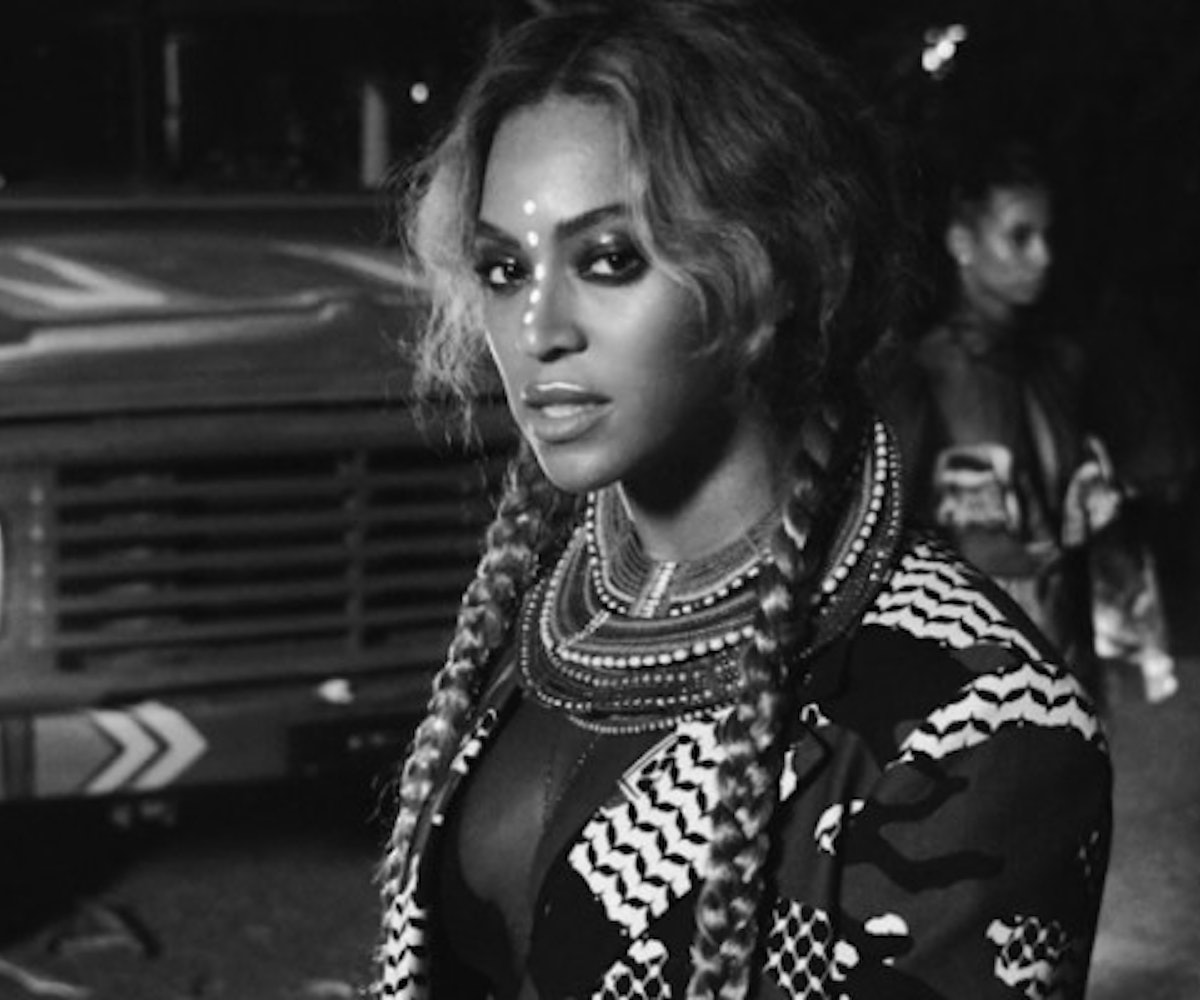 Beyoncé's Lemonade is a visually stunning and sonically satisfying cultural call to action. As our editorial assistant Sydney Gore wrote, it "is more or less what black feminism looks like in our minds."

It's completely possible to sit down and unpack the album and its social and political implications for days and use it to incite some much-needed conversations about race and gender. But instead of trying to get down to the root of modern day's hierarchy and work to eliminate it, many have latched onto the album's theme of infidelity and other small-picture subjects and bashed the validity of the album. Why? Because they're either, well, a bit idiotic, or just trying to distract everyone from thinking too much about our current social structure.

Below, find five conspiracy theories that are floating around, and bask in it all. Then sip some lemonade and have a proper conversation.

Beyoncé was contracted by the CIA to create Lemonade and, in turn, incite a race war

Aside from the fact that she's one of the most recognizable people across the globe, we're sure that Beyoncé would make a great secret agent. She's persuasive, smart, and, well, be honest—you'd probably trust her with just about anything. But since she is in fact one of the planet's greatest icons, the only sure way that she can explore this potential is to become an undercover operative, working the media to push whatever agenda the government sees fit, right? As noted deranged figure Alex Jones declared in a Facebook video, Lemonade is all an elaborate act "so young people go out and act like maniacs... and try to start a race war in this country." As he continued, "This is to get us all at each other’s throats, when we’re all Americans getting screwed over by the NSA, and the foreign banks and derivatives. We’re all getting our kids attacked and aborted, and shot up with vaccines and GMOs. We’re all in this together." Okay then.

On her talk show, Wendy Williams insinuated that the only reason designer Rachel Roy—who was attacked by the Beyhive after Instagramming a photo shortly after Lemonade's release with the caption, "good hair, don’t care... #nodramaqueens"—inserted herself into the "Becky with the good hair" speculation is because she is a pawn in Bey and Jay's plan for world domination. "Rachel Roy, you are not this fighting girl unless you’re on Beyonce and Jay Z’s payroll and they paid you to mix it up to add more, I guess, sales for Lemonade," she said.

Yes, many consider Beyoncé to be a goddess herself, and a majority of the Internet certainly worships to her. But sometimes, especially when it comes to art, people want to take on other personalities. And while Sasha Fierce was good for a time, as Mic points out, the Internet believes Beyoncé is channeling Oshun, the African goddess of "love and sweet waters," in Lemonade. "Y'all think Beyoncé was just breaking windows, twerking and playing in water. No, she was portraying Oshun, a Yoruba Orisha," Tasha Robinson wrote in a Facebook post that has since gone viral. "Sensual, sexual, beautiful goddess [and] deity who is a healer, gives life, growth, luxury, change and prosperity. That was the message of Lemonade. Love, change and prosperity."

Sure, the haters are corny with "that Illumanti mess," but that doesn't mean they're not out there. And, apparently, it doesn't mean that Beyoncé is not a sinister member of the world's most secret, elusive religious/political/social groups. "She's getting more and more demonically possessed and promoting it," A Call for an Uprising says.

The whole "cheating" theme is all just one elaborate PR stunt

Art and music have traditionally been mediums used to convey both personal and universal truths. But Beyoncé isn't like everyone else, the Internet says, why would she do what others have been doing for hundreds of years? Using the fact that Beyoncé has remained at the helm of her image—undertaking creative control over all of her projects and not pandering to as many interviews as the public may want or demand of her—and the fact that the general public seems to eat celebrity scandals for breakfast, a lot of people are claiming that it's all an elaborate PR move. Besides, as New York Daily News writes, "How many husbands would let their spouses publicly diss them like that if they really had been caught cheating?"