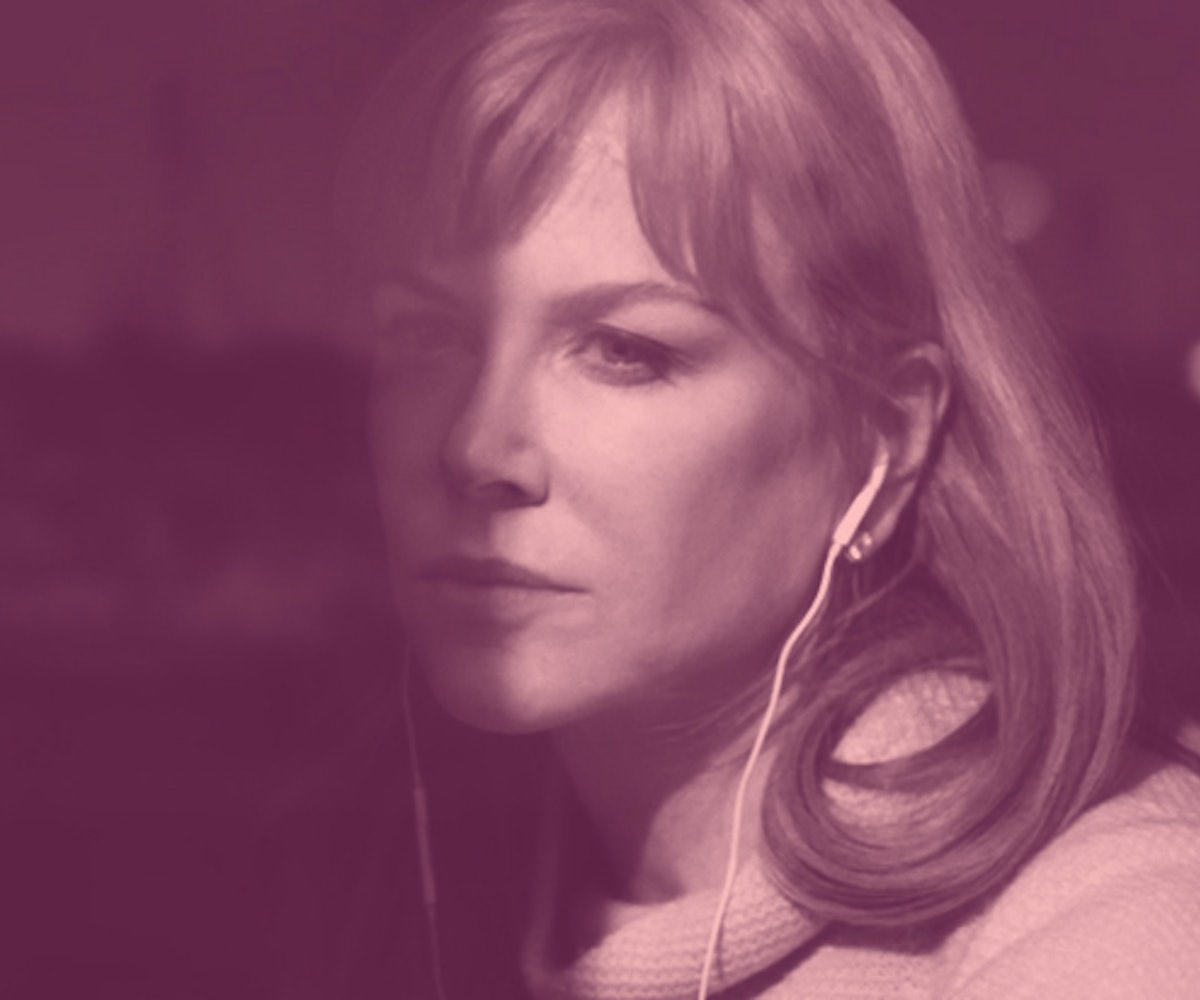 Spoilers for Big Little Lies ahead.

Over the course of its seven-episode run, Big Little Lies offers viewers many glimpses into the turbulent and volatile experiences of domestic and sexual violence. There are explosive scenes of women being brutalized; they're thrown across a room, or struck still with a hand wrapped tightly around a throat; they lie face-down on a bed after a vicious assault. It's hard not to flinch, not to feel these outbursts in a visceral, palpable way. This level of violence is unignorable. It's wild and fierce, and the damage it causes is easy enough to see, hard though it is to bear witness. It's something we've seen captured on film before, but it remains a powerful viewing experience; it is hard not to feel on our own bodies those same blows which rain down upon the women on-screen.

And yet, while watching Big Little Lies, the moment in which the horrors of domestic violence can be felt most profoundly is not one of chaos and destruction, but rather is one of quiet, one seen from a distance; it's the scene in the finale in which Celeste (Nicole Kidman) hesitates before leaving her house with her abusive husband Perry (Alexander Skarsgård), but then silently walks into the night with him, unsure of exactly what her future will hold, certain only that it will involve pain. It was in this seemingly small moment—a few second walk down the driveway; a married couple on their way to a PTA fundraiser—that the insidious nature of domestic violence fully rears its ugly head, becoming all too clear in its intent: to cause terror.

Victims of domestic violence experience the most intimate form of terrorism, in which even the most banal of their activities are colored by the system of abuse and oppression under which they live and suffer. Domestic abuse is pervasive and it is heinous, and it is a reality of the lives of all too many women; a reality that is usually hidden from view, whether in real life or in popular culture until it explodes from the discreet margins of private lives and into public perception. But it is usually only the outbursts to which we are privy; until then, the underlying problems, the quiet suffering, stays in the dark, lurking.

Prior to Big Little Lies, domestic violence and its effects were covered in film and TV, but usually in a way that treated this type of trauma as anomalous, rather than anything approaching common. Consider films like Sleeping with the Enemy or Enough; while these movies accurately depict domestic violence as a life or death scenario for its victims, they also frame it in such a way that the effects of domestic violence feel larger than life. It isn't enough for a man to abuse and terrorize his wife; he must also stalk her and have an almost inhuman ability not only to track her down no matter how completely she tries to disappear, but also he can, inexplicably, survive almost any form of violence inflicted upon him. The abuser, then, becomes an almost unbeatable force; in order to conquer him, as Marissa Meltzer recently wrote for W, the victim must become "a warrior in order to face him and, ultimately, conquer his tyranny over her."

There is some accuracy in this depiction; statistics surrounding domestic violence show how difficult it is for victims to escape. But by presenting these relationships as impossible to escape, we risk making victims feel like theirs is an insurmountable task—they will never be able to truly leave, so why try? This is one of the many reasons why many women don't even attempt to end these relationships; they know that their abusers will try to follow them; they know their economic realities will suffer once they leave marriages; they know that it will take what feels like an inhuman effort to escape the person who might ultimately kill them. They can't see a future because it's never been presented to them. And so they stay. Some, like Celeste, try to navigate the circumstances of their abuse. They lash out. They placate. They try and gain the upper hand. But by engaging with their oppressors, they wind up feeling complicit in their own abuse—an end game which is one of the desired goals of abusers everywhere, as it isolates victims since it makes them feel like they, too, are guilty and thus not worthy of being saved. And so they stay.

Big Little Lies demonstrates this reality to great effect; it showed the ways in which abuse doesn't simply exist in the explicitly violent times, like when Perry threw Celeste up against the wall. It also maintained a more subtle presence, like in the instance when Perry commanded Celeste to strip for him during a long-distance phone call; it was there when he approached her as she showered, naked and vulnerable; and it was there as they walked to the car together, after Perry found out that Celeste had rented an apartment for herself without Perry's knowledge. Big Little Lies reveals that the real danger in abusive relationships is not solely visited upon women during noisy blowout fights, but that it also exists in the quiet moments of terror they must feel when every last means of escape seems to be closed off for them.

But, of course, Celeste is not without a means of escape. It must be noted that Celeste has financial means far beyond those of most women, and so she has the freedom to rent an apartment and seek therapy from a professional and formulate an escape plan. However, even with all her money, Celeste was only able to seek help once she began to talk about the fact that she actually needed it. Celeste was only able to even contemplate freedom once she received external confirmation in the form of a concerned therapist that she was being oppressed. This is an essential part of domestic violence narrative that is almost always missing. Hollywood loves a lone wolf story, and that is true in its depictions of abuse victims as well, but that's a narrative fallacy that is dangerous when it comes to real victims of domestic violence.

In reality, though, women do not–and decisively should not—need to be the ones to save themselves. Rather, women should know that there are support systems in place, whether they're medical professionals or close friends, to whom they can reach out and share their burden with. It won't be easy and it won't be clean, but it is often the only way that women can fully separate from their abusers. Big Little Lies presents this beautifully, as we see Celeste slowly opening up to the idea that what she experiences in her marriage is not normal, and that there are people who can help her by offering advice and counsel as she moves to separate herself from what is undoubtedly a life-threatening situation. As a victim, Celeste suffered alone; she is always most at risk when she is isolated, no matter how in control she has convinced herself she is. It is only when Celeste allows more and more people into her life, whether friends or professionals, that she begins to be able to see a reality in which she is no longer a victim, in which she can be free.

There is no tidy ending to stories of abuse and violence; not in reality, and not even on television. All too often, women suffer in silence; they do so for their whole lives, many of which wind up being abbreviated versions of what they could otherwise be. In Big Little Lies, Celeste and Perry's story ends with his bloody death, a fate he surely would have been fine with giving to his wife. But Celeste's story continues; it evolves into one in which she is surrounded by other women, as part of a group that is stronger together, working to support one another. Will Celeste have lots of work to do to recover from years of trauma? Yes, of course. But there is little hope in attempting to recover on her own; rather, she will be able to find strength among other women, all as uniquely imperfect as she is, all working to be the best versions of themselves.

NEXT UP
Entertainment
Gracie Abrams & Gia Coppola On The Joy Of Free-Flowing Collaboration
Culture
6 Shows To Binge Once You've Finished 'The White Lotus'
Entertainment
Bad Bunny, Lizzo, Kim Petras Will Perform At The 2023 Grammys
Entertainment
Brendon Urie Officially Disbands Panic! At The Disco
Style + Culture, delivered straight to your inbox.