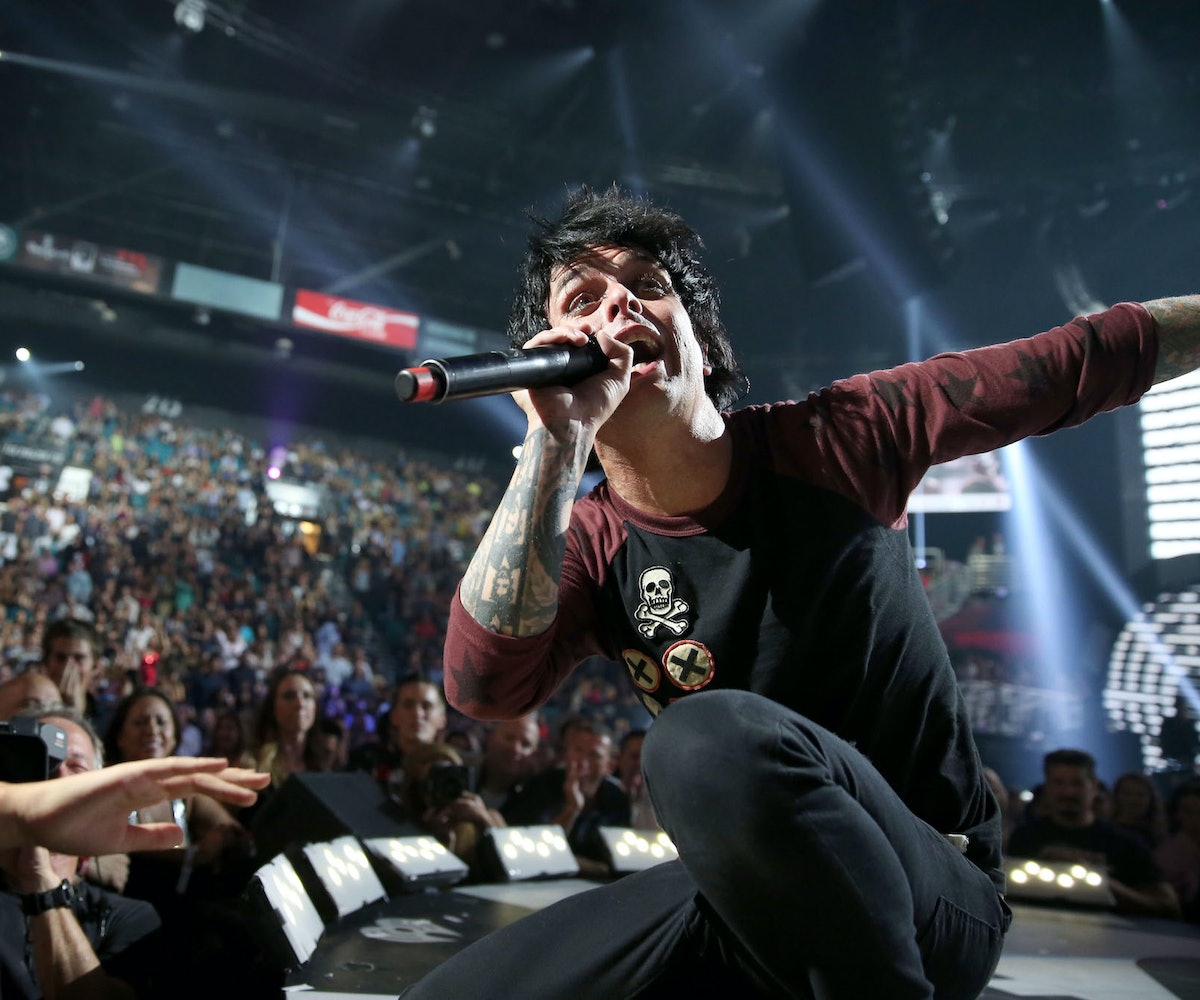 Twenty-six years after the inception of their seminal punk-rock band Green Day, Billie Joe Armstrong and his bandmates released a trilogy of albums, ¡Uno!, ¡Dos!, and ¡Tré!, and then promptly went on a four-year hiatus to focus on their personal lives. Now, they’re back and just as commanding, inspired, and loud as they were when we first fell in love with them. Their new album Revolution Radio, out October 7, delivers in terms of music, lyrics, and an unstoppable and quintessentially Green Day energy. The record covers a wide spectrum of both sound and feeling, shifting between fast tempos with striking guitar riffs, as heard in “Bang Bang” and “Bouncing Off the Wall,” and softer yet powerful songs like “Still Breathing” and “Ordinary World.”

That’s not all that Armstrong has been preoccupied with: He also composed songs for the musical These Paper Bullets! and is starring in this month’s Ordinary World, a coming-of-(middle-)age film written and directed by Lee Kirk. Here, Armstrong discusses Green Day’s new album, his first starring role, and the legacy of his iconic band.

We took a long break and then, I don’t know, one day I just got into my studio in Oakland and I recorded a demo of “Bang Bang,” then I did another demo of “Somewhere Now” and it just felt like the beginning of something really exciting. It wasn’t a forced process in the slightest. I showed the guys the songs and they got really excited, too, and so I just kept writing from there.

Do you think a big part of that natural energy comes from the fact that you guys self-produced the album?

Yeah, but it just kind of ended up that way. My studio here is small and we were getting great sound, so there was no point in bringing in another guy to look over our shoulders. It felt very independent and focused, but also really loose and fun. There were no distractions.

How do you feel about Green Day’s return?

I think people are going to be excited with the new record, and the only thing I feel, honestly, is grateful. A little bit of nostalgia can be very good for the soul, as long as you’re not sitting and stewing in it. There’s something about this record that is very refreshing.

“Bang Bang,” the lead single from the new album, comments on gun violence, from the imagined perspective of a mass shooter. What inspired you to write about that topic?

Well, I just try to reflect on what’s going on. A lot of my songs are a series of questions and looking at things and just being completely confused by what’s happening—especially now, in the strangest election season I’ve ever seen in my life. “Bang Bang” is about America’s gun culture and how it’s blended with social media. It’s this really twisted version of what’s going on in this guy’s head, which I don’t really know because I’m not in his head, but I tried to write from his perspective. It was freaky because it took me a couple of days to write the lyrics, and I was walking around singing to myself, “I am a semi-automatic lonely boy,” and thinking, “I just want to get this song done because it’s freaking me out.”

Tell me a little bit about what it was like filming Ordinary World, and your character Perry.

I love brand-new experiences like that, and feeling like a rookie. I felt really close to the character because Lee Kirk became a father at 40, and I had a similar experience raising my sons and feeling like I didn’t know what I was doing. I think I was pretty freaked out the first couple of days [of filming], kind of just going, “Oh my god, am I doing this right?” But then after a while I got really comfortable, and I was working with awesome people, like Selma [Blair] and Judy [Greer]. Working with Fred [Armisen], obviously, we had a lot in common because Green Day played with his old band in Wisconsin in, like, 1992, so we reminisced about that.

Perry plays the song “Ordinary World” in the scene where he’s singing to Judy Greer’s character. How did that song end up on the album?

Lee Kirk wanted a song for a really poignant moment where I’m sitting down, singing to Judy Greer, and he loved it. It just turned out to be perfect for Revolution Radio. Through all of the craziness going on, I was just looking for something a little more simple. Whether it’s social media, crazy elections, or terrorism, I just want to slow things down in my brain and my world.

In the movie, your character’s daughter plays guitar, and your sons in real life have ventured into music, as well. What’s that dynamic like?

We just share music with each other. Jakob’s a really good songwriter, and Joey’s band SWMRS is a really good band, but I’m biased because I’m a proud dad. The fact that they’re playing high-quality stuff is great. They [introduce me] to stuff and I’ll show them old music that I listened to. It’s pretty cool.

Green Day have been working together for so long. What do you think has allowed the band to stand the test of time?

We’ve always just stuck to our guns. With Green Day, there is an energy that we put out that is infectious, and we never want to abandon that because I’m chasing a trend or what current alternative radio is playing. We want to expand, but not conform to what’s going on now. We seem to rejuvenate with every record that we put out, and this time, I plugged my Les Paul Jr. into my Marshall amp and it immediately felt brand-new again. I love that noise that we make; it’s been the one thing that has been very loyal to me over the years.