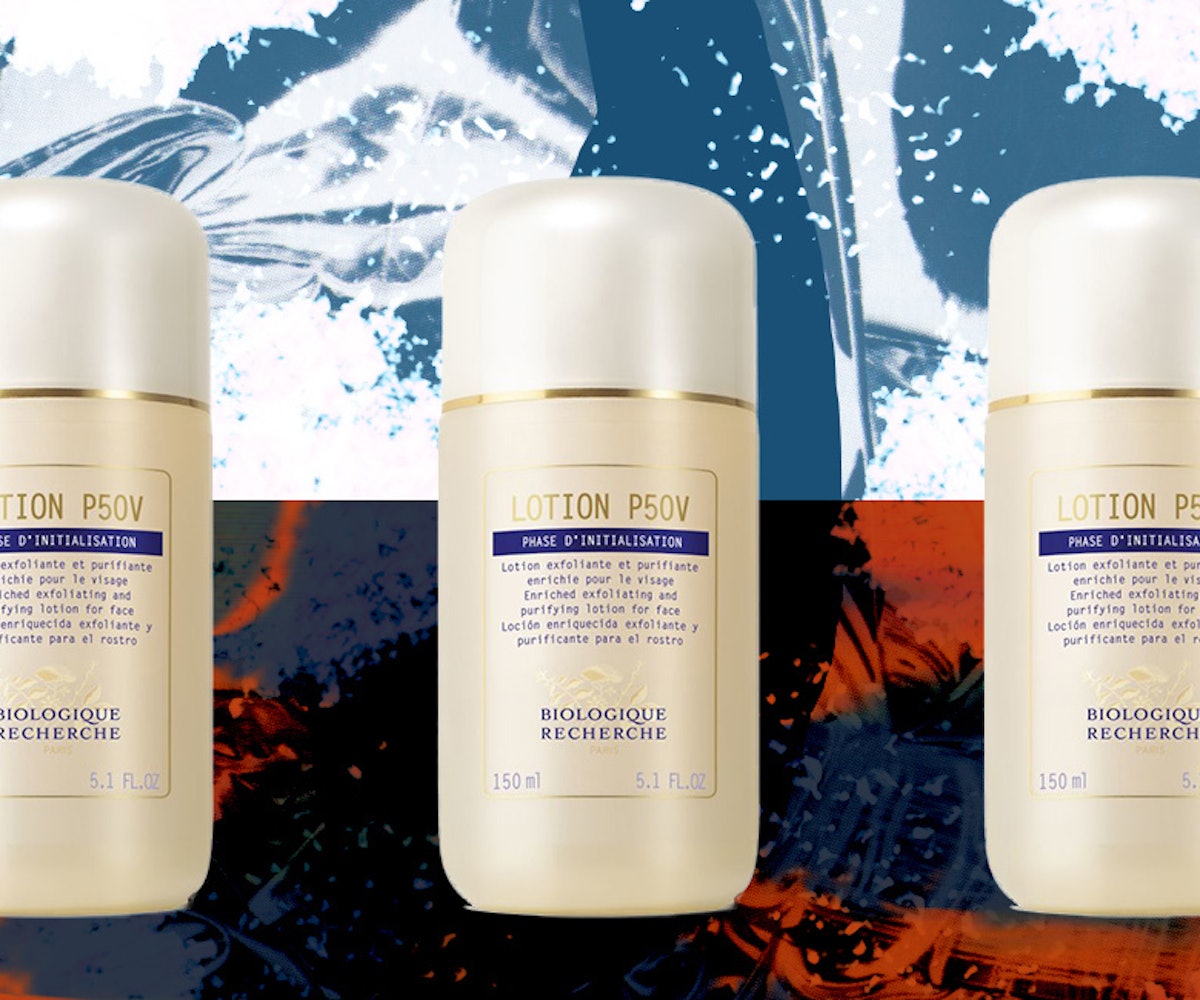 Picture this: A biologist, physiotherapist, and doctor walk into a lab and come out with one of the most sought-after products in the beauty space.

No, this isn't the setup to a joke. Instead, it's the beginning of the story of one of France's premiere beauty brands, Biologique Recherche. Founded over 40 years ago, the brand has become known for its clinical-meets-holistic approach to skin care. Dr. Philippe Allouche, the co-owner and head of creation for the brand, says the idea behind the company is to “rebuild a fully functional epidermis in order to protect yourself” from free radicals, aging, dark spots, and whatever other problematic skin conditions you might have. The ingredients used are raw, concentrated, and pure; the packaging simple; the marketing, basically, non-existent. And yet the brand can be found right next to Sunday Riley and Glossier on nearly every influencer’s top shelf, largely due to its star product: the P50 lotion.

The P50 lotion goes by many names: holy grail, Jesus in a bottle, the Hermès of skin-care products. It's a chemical exfoliating toner (it includes acids like lactic, malic, salicylic, and others) and meant to fade hyperpigmentation, shrink pores, clear acne, and balance out the complexion. People obsess over it because it does all those things. Unlike other so-called miracle products, the P50 lotion isn't one-size-fits-all; there are actually seven versions of it on the market, meaning that there's an option for every skin type. The original, the 1970, is the most intense and includes the controversial ingredient, phenol, which has been banned in Europe (but not the U.S). Dr. Allouche tells me that he reformulated the original in the 2000s (though it's still available) because it proved to be too harsh for the skin. “The skin has changed over the decades, it’s more sensitive and thinner,” he says. The other options include the P50V, which is moderately strong; P50W, which is meant for sensitive skin; and P50 PIGM 400, which is specifically for combatting hyperpigmentation.

When you have a product that works, people talk about it. And post about it. And tweet about it. And that's exactly what's happened with the P50 lotion, a fact that has greatly benefitted Dr. Allouche and his team. The P50 lotion has always been popular, but, lately (at least in the U.S.), it’s graduated to cult status, even spawning a couple of copy-cats. When I meet with Dr. Allouche last week, though, it isn’t to discuss the lotion; they already know people love it. What the brand is focused on now is making sure customers know the magic potion also extends to body products and even a scalp treatment. “It’s not hair on one side and scalp on the other,” Dr. Allouche says. “They work together. The scalp is like the soil—it’s the temple for all of the hair products.” (We know this already, right? We’ve written about the importance of scalp care several times on this very website.) However, in the same way that the P50 works wonders, its scalp treatment, Biologique Recherche wants you to know, will do the same.

One thing that makes this brand unique, though, is how exclusive it still seems. With the kind of growth the company has experienced, most brands would understandably expand their distribution—but not Biologique. Right now, U.S. customers can only find the products online on Paul Labrecque and Rescue Spa’s websites, and Dr. Allouche plans to keep it that way. However, there are other spa partners consumers can visit nationwide. “We partner with people who we deeply believe can give the best to our clientele,” he says. “We love aestheticians. We love spas. All of these people are educated about the skin, and we think they're the best ambassadors.” When I ask him if he plans on making the products more readily available in the future, he shakes his head. “It’s just not the core of the brand,” he stresses.

Cue a sigh of relief from beauty lovers of all things elite.