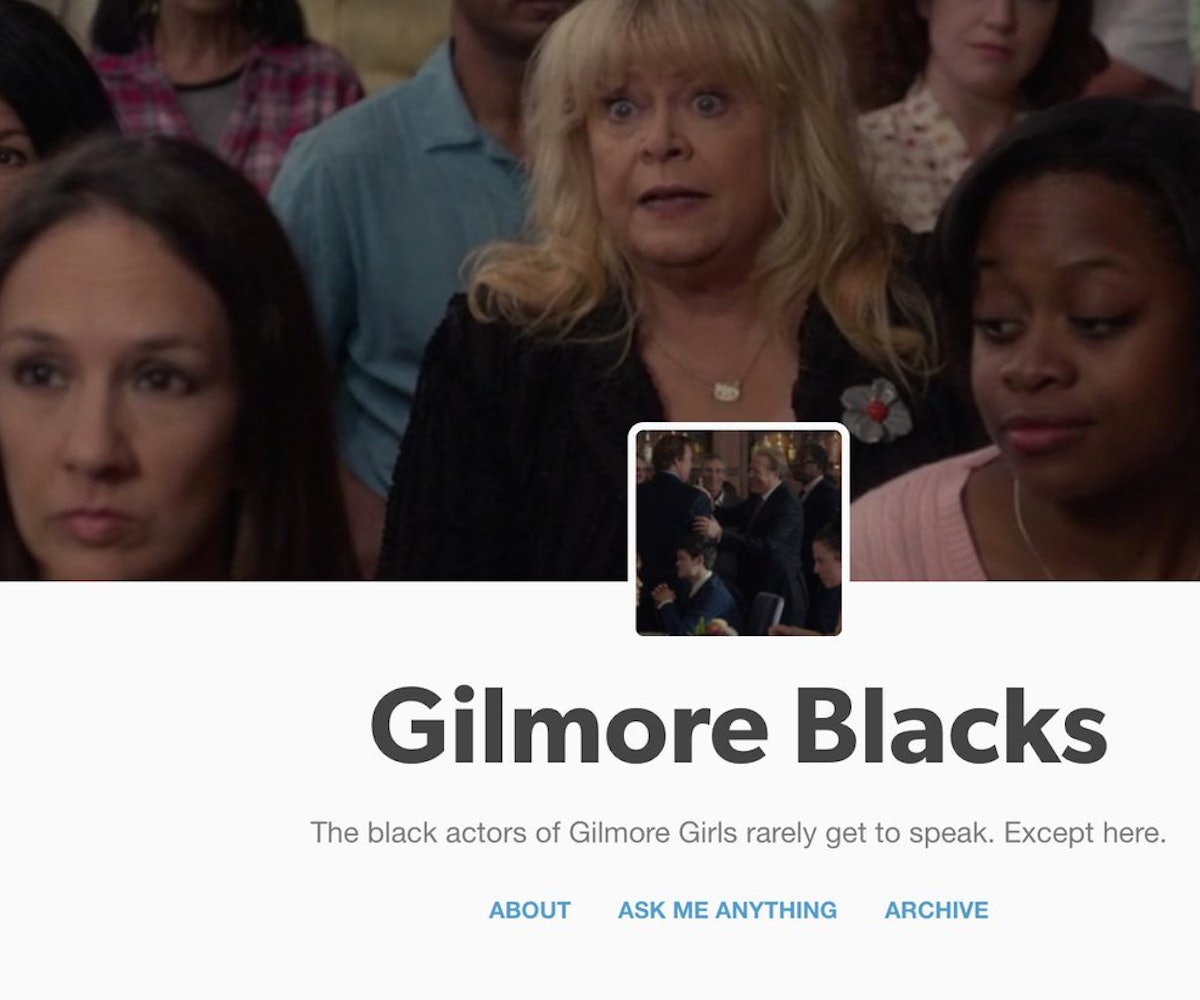 If you have been watching Gilmore Girls for as long as I have, there's one glaring detail that can't be ignored: the lack of diversity. At first, you won't really notice it because hello, Rory's best friend is Korean, but once she starts expanding outside of the bubble that is Stars Hollow, Connecticut, you realize how white the program is on the whole. As a longtime fan of the beloved series, it's frustrating to watch all the people of color constantly fade to the background as the leads carry on projecting their white privilege on the screen. Brooklyn, New York-based writer Rahawa Haile took this observation a step further by creating Gilmore Blacks, a Tumblr account where she notes all of the appearances by black actors in Netflix's Gilmore Girls: A Year in the Life.

It all started when Haile began documenting the actors' cameos on Twitter. "The show has no interest in minorities—and why should it?—but in 2016, it doesn't have the luxury of leaving them out entirely either. And let's be honest, I don't run to Gilmore Girls to see myself reflected, to scratch some sort of representational itch," Haile tells us. "The blog serves as a reminder that the opposite of tokenism isn't overrepresentation. It's as simple as that."

As someone who has been an avid watcher of the show since her teenage years, it was obvious to Haile that, for the revival, the creators of Gilmore Girls "decided to boost its black representation this season," visually speaking. If you pay close attention, most of the black actors don't actually have lines, though.

"On the surface, it's about Gilmore Girls," she says. "Extras have to extra, you know? On a broader scale, the repetition is a way of showing the limitations of being an actor of color in an industry that knows it now has to be seen seeing you without actually making any eye contact."

Haile uses Gilmore Blacks to provide three pieces of information: name of the character (usually unknown), speaking role (usually none), and the purpose of their role (endure).

"The purpose of Gilmore Girls isn't to celebrate diversity; it never was," she adds. "The issue isn't that the show needs more diversity. It's that the show's idea of diversity reduces minorities to stereotypes or treats them as props."

From taking screenshots to documenting the details, it's a time-consuming process that required extremely careful watching in order to spot all of the individual actors. Haile is currently finishing up the second episode of the revival with plans to upload more photos today and tomorrow. Once she's finished the entire thing, she says that she'll move on to watching This Is Us and Chewing Gum on the streaming service.

On another note: Haile, who recently solo-hiked the entire Appalachian trail, has got another bone to pick about the way in which women hikers are treated. We look forward to following the Tumblr or reading the essay that will ensue.