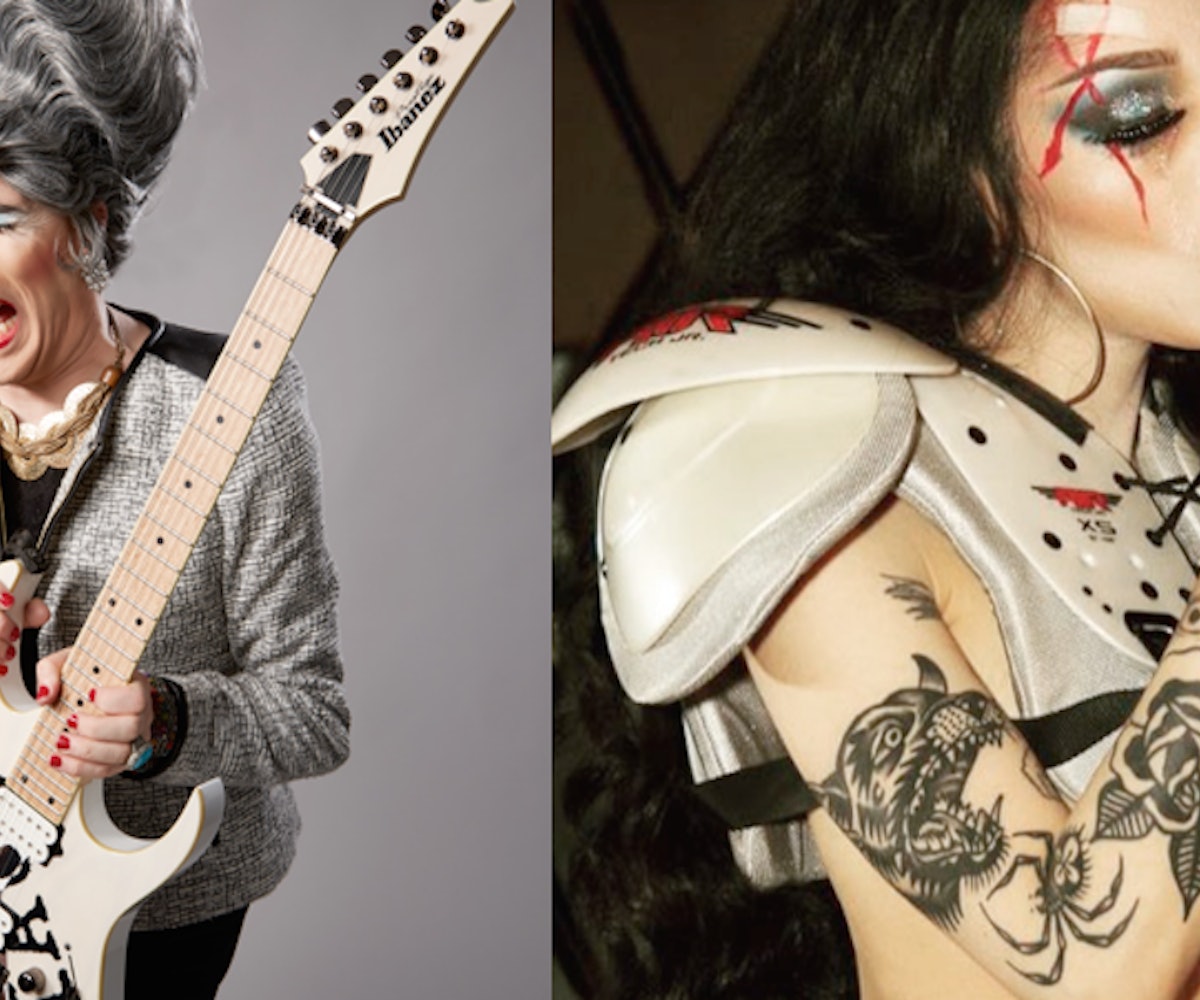 The drag renaissance of the past decade has led to an explosion of new artists creating a plethora of diverse art, ranging from feature-length films to makeup campaigns and full, critically adored LPs. The multitude of art available from queer creators has perhaps never been more vast—and yet, when it comes to music, the range of genres being presented to the public seems rather small. Of course, there's nothing wrong with the bubblegum pop or sugary electro-rap populating the rainbow radio waves, but what about drag artists involved in other scenes?

Brooklyn-based artist Alex Valdes, for example, is a transgender noise music performer who uses their drag persona Reagan Holiday in multimedia pieces. The character of Reagan, who began appearing in experimental video art, was used by Valdes as a sort of shield to protect them from gender dysphoria as they negotiated their own femininity in the world.

“Her name is two references," explains Valdes. “I Marilyn Manson'ed it. Reagan is the little girl from The Exorcist,but I changed the spelling, so it's like Ronald Reagan. And Holiday is Billie Holiday—it's about these tragic female icons, or female icons being overtaken by a tragic force. She's this kind of ghost or symbol of tragedy overtaking feminine energy."

“From there it evolved into an exploration of femininity and gender," Valdes continued. “Before I performed her in drag, I was her every day. I wore the hair, I did the whole thing. For me it was like: 'I'm trans. I don't want anyone to know. If I do female identity so well, then no one will know.' She was a video art character, then she was me, and then I was able to have relationships with my body outside of her. And now she kind of is this powerful force in my life. Reagan protected me in a lot of ways, she was a guiding light."

The transformation of Valdes into Reagan is something widely radical in the world of harsh noise music, a subculture that has been traditionally dominated by ultra-aggressive male personalities. For Valdes, who also has worked as a pro-wrestling manager for the deathmatch brawler Casanova Valentine as a different character named Black Death Cleopatra, the familiar machismo and violence of the scene were sometimes what fueled their art. Juxtaposing samples of girly pop music within sets comprised of microphone feedback, psychotic droning, screeching static, and garbled screams, Valdes found audiences shockingly connecting to the earnestness of their art.

“When I started it was like: I'm too femme for these noise bros," Valdes continued. “This is back in the day when noise wasn't very diverse. It's still not. But back then it was super-white, super-hetero, super-cis. And I would come in in full drag, and you would feel the energy in the room change. I really wanted to fuck with these people. So I was like, 'How do I get a bunch of bros to get down to Kesha?'"

“But it's emotionally sincere. That's why it's effective. It comes from a real place, it's just how I choose to display it."

Similarly out of place in the sometimes frighteningly white and cis drag scene of New York City, where Broadway and Disney numbers often reign supreme, Valdes began curating her own night of gender-variant artists working in the medium of noise. Harsh Noise, Beat Face allowed artists to explore avant-garde music and genderfuck aesthetics.

“I'm too drag for the noise bros, and I'm too noise for the drag bros. And I was like, 'What the fuck do I do?' And I decided: I don't want to do anything other than what I want … By making Harsh Noise, Beat Face I was able to find my scene—people were able to converge in a new way. And I was like, 'Oh fuck, this is a thing people like? Let's get it! Let's keep going!' The world is fucking burning, why not put on some fucking lashes and yell about your family problems?! Why not?! It's all about pain."

While Valdes supports and adores many of the glamorous creatures of RuPaul's Drag Race, they lamented the ways that the careers of drag performers have become somewhat limited in terms of scope.

“I'm nervous because I think the perspective on what makes a successful drag queen is very literal. It's like a timeline: you get a higher platform, you get on Drag Race, you put out an album … [There is a] need to create an object that is sellable. It's like putting a price tag on an ephemeral performance."

Mrs. Smith, a virtuoso metal guitarist with an adorational cult following, has taken another route entirely. Despite the character also being an exploration of neuroses constellated around gender, Mrs. Smith is resistant to if not entirely rejecting of the "drag" label.

Mrs. Smith is the creation of a reclusive artist who prefers not to be identified or directly quoted so as to maintain the separation between themselves and the character, who they envision as an entirely different autonomous entity. Appearing in one-woman shows and instructional guitar videos (and occasionally popping up all around the world for impromptu street performances), Smith is closer to a fully realized Andy Kaufman-inflected alter ego with her own personality, idiosyncrasies, and deeply complex mythos. Influenced more by Van Halen than RuPaul, audiences are often shocked to learn that Mrs. Smith is the one actually playing the guitar in her videos, with many assuming she is either an actress or another famous guitarist in disguise.

Mrs. Smith, so the legend goes, is an aging prodigal ingenue from a deeply abusive upper-echelon family who continued to collect wealth through a series of failed marriages until she was kidnapped and held ransom by a Norwegian death metal band from who she learned to shred in order to survive, until she conquered them and became their leader. A cat enthusiast and true woman of the people who often finds herself lost in her own anxious fantasies, Smith has gained a perhaps unlikely yet deeply devotional following from guitar enthusiasts and metalheads. And while audiences at drag festivals like Bushwig and DragCon have embraced her, it has been predominantly straight men who have celebrated the character, who they see as bringing freshness and originality to a homogenous and exhausted scene rife with monotonous gear reviews and bland tutorials.

With an EP out, a never-ending global touring schedule, high-profile fans that include rock gods, and even an appearance in a Gucci commercial, the semi-fictional world of Mrs. Smith continues to get more complicated as the character amasses fame outside the realm of traditional drag. In fact, in articles that describe Mrs. Smith as a drag queen, fans are quick to correct reporters and note that, actually, she's a lady.

Mrs. Smith is a stark departure from the catchphrase-generating drag seen on television and social media, which for better or worse usually presents endearing yet deeply hypersexualized characters. Instead, it is Mrs. Smith's unparalleled musical skill and exploration of a different, much less flamboyant kind of womanhood that has transfixed audiences. Mrs. Smith exists in a far more complicated cosmology, rife with psychodynamic confusion.

Of course, pop is going to have a more enduring appeal to mass audiences than dada-inflected performance art, but the issues raised by Reagan's and Mrs. Smith's art show something deeply troubling about the popularization of a specific facet of gay culture: Why must artists playing with gender be presented as toyetic creations to be appreciated? Does mass culture demand a simplification of queer aesthetics for LGBTQ people to be accepted, or is it gay culture itself that reduces talented artists to easily-consumable caricatures?