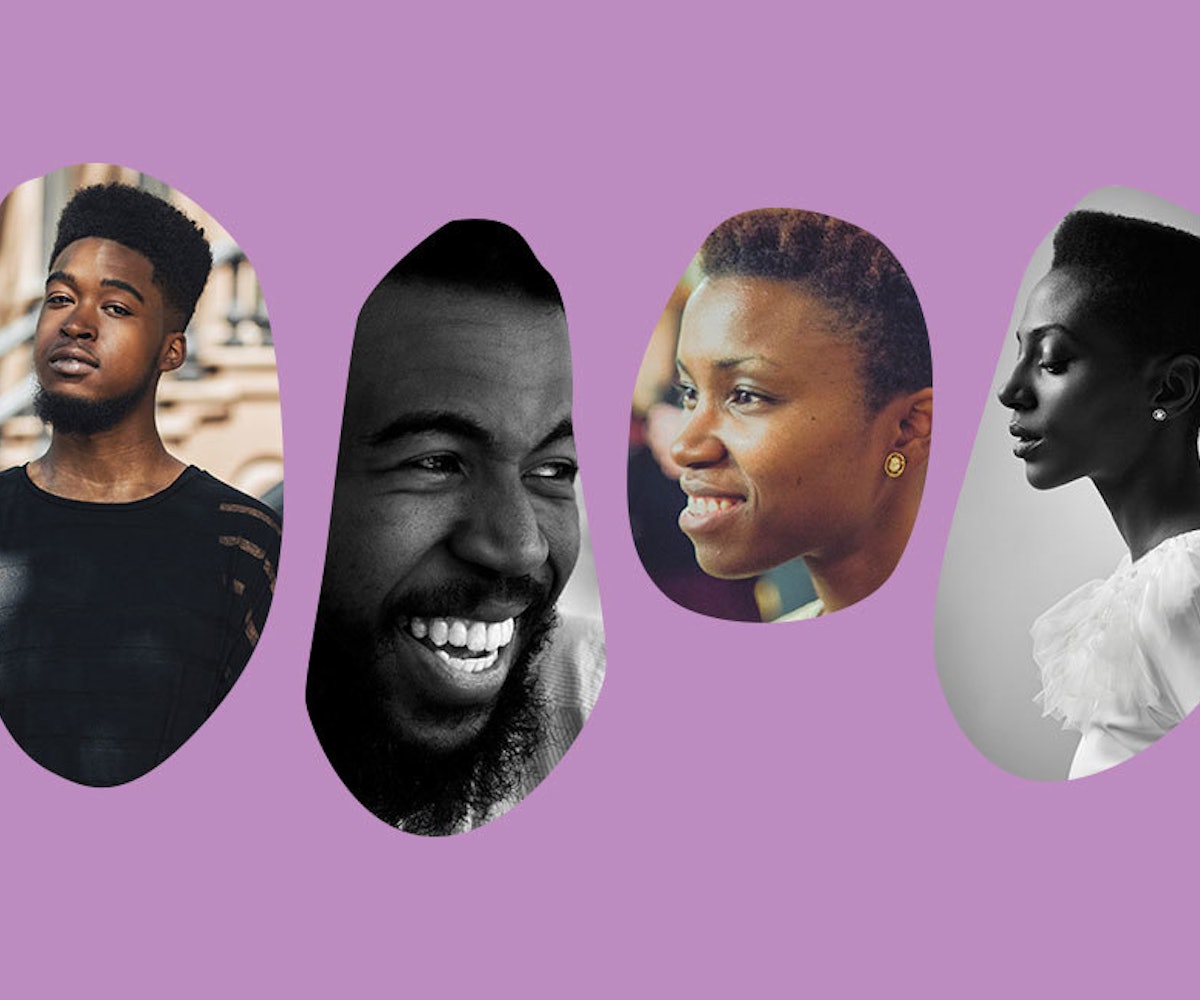 Today, October 17, is Black Poetry Day. Is it a legitimate holiday? It is according to the internet and this website! It was established in 1985 and is meant to celebrate black poets both past and present. October 17 is also the birthday of Jupiter Hammon, the first published black poet in the United States. Legit holiday or not, we’ll take any excuse we can to highlight black poets and black poetry; we shouldn’t need a reason or a specific day to do so.

When it comes to black poets, you probably already know the usual suspects like Langston Hughes and Maya Angelou, who are always worth praising, but there is also a young crop of poets bringing new color to words. Ahead, we had some of them share their favorite works of poetry that either inspired or changed them for the better.

And then in the video, below, poet Yrsa Daley-Ward came to our studio and shared a rendition of one of her poems, aptly titled “Poetry.” Happy holiday!

"As a child, because I learned to read super young, there was so much that was in our house. We had everything—we had the Bible, we had Kama Sutra—we had everything. I would say, Alice Walker, Sonya Sanchez, you know, writers like that who weren't afraid to talk about things that we like to sweep under the carpet... I'm inspired by so many different forms of the written word. I go back and I look at Nayyirah Waheed's work—I think it was 2013 when she published Salt, and it's an incredible piece of work. I'm a person of a few different moods in the space of an hour... I don't have favorites as such, I just have many, many, many go-tos."

"'Here—I am here': These four words showed up at a time I desperately needed to see myself. In 2013, I was doing the most—juggling a full-time job, poetry workshops, dance class, and full-on post-undergrad depression. Claudia Rankine’s Don't Let Me Be Lonely helped me find language for what my body already knew. A hybrid narrative that uses the prose poem as its main form, Rankine's pre-Citizen ‘American Lyric’ reads like a montage. Various meditations on mental health, health care, state violence, loneliness, collage to—I think—tell us something about grief. I didn't know it then, but I was indeed grieving: a certain idea of myself and what my life should be. This book is a reminder of presence, and how it doesn't always look like an answer—sometimes it's a choice to remain in the prism of what you're becoming.”

“The Book of Light by Lucille Clifton opened up for me the possibilities of myth and archetype for making sense of the world. ‘The brothers’ gave voice to Lucifer and imagines Lucifer as a sibling to God. As a ‘brother,’ Lucifer challenges God by essentially saying, ‘If you didn’t want the whole Garden of Eden thing to happen, you could have stopped me.’ It’s brilliant in that the conversation is only heard in the voice of Lucifer, which is the human voice asking, ‘Why do you allow bad things to happen?’ and also, ‘You call our pleasure sin, too. You must mean for all of this to co-exist. This is your fault!’ It is also the collection where ‘won’t you celebrate with me,’ one of her most celebrated poems, appears. Of the self-reliance of black women, because we are both black and woman, she says, ‘born in babylon/ both nonwhite and woman/ what did I see to be except myself?’ It’s intersectional theory in verse. It’s with Clifton that I came to understand that poetry has more expansive possibilities in compact space than most forms of writing.”

“Time & Money by William Matthews transformed the way I understand the relationship between the cloud of witnesses in my head and the multitude of forms they might take on once they give their energies over to the page. There is so much language in it that I love dearly, phrases like ‘big as a bus’ and ‘this slop is where I live’ that often recur to me for no clear reason at all while I’m walking to the barber shop or shopping for fruit. The manner in which Matthews writes about music—Mingus especially—as well as the way he works through the titular concerns of the text with so little real estate—many of the poems barely exceed a page—all of it taught me something very important about the relationship between craft and experience, between everyday living and our highest human concerns. This book was an education; its best lessons haven’t left me yet.”

"I love The Body's Question by Tracy K. Smith. It was one of the first poetry collections I read all the way through when I was in college. I remember being struck by both the scope and imagination of her poems, how she was able to evoke so much beyond her individual life, and how she also brought such tenderness and detail to poems about her own experience. Her work allowed me to access my own feelings about longing and desire that I'd never before been able to articulate."

“The poem ‘[American Journal]’ by Robert Hayden is a stunning poem to me. It feels almost prophetic given our current political climate and does so much emotional work to highlight the complicated relationship of black people, immigrants, and perhaps all people of conscience in such a flawed country.”

“In June, Vinyl Poetry published two poems by Jae Nichelle, ‘WHY WE ONLY HAD A FAMILY REUNION ONCE’ and ‘At the Beach,’ and I haven’t closed that tab on my browser since. The family reunion poem sings with a kind of knowledge so deeply black and unapologetically real that I feel like a cousin at the function, standing by the fish, watching my brilliant cousin Jae’s eyes dart across the room archiving the ways, languages, and mythos of our family. 'At the Beach' is a poem that breaks the box of what a poem can be. Its diagram structure makes the eyes go all over the page, unfolding its own time, slowing the reader down, making us take in not just the language, but the picture she has painted us in words. These poems made me an instant fan. They make me excited to write, excited to read, excited to follow Nichelle’s work for the rest of my days. These poems haven’t left me since the summer, and I know, like good grits, they will stick to whoever is blessed enough to read them.”

“My favorite book of poems is The Feel Trio by Fred Moten. Fred Moten is one of my biggest inspirations, because he allows a freedom in his language that invites historicity, and encourages the reader to get into their own body and think of language as an organ. I first dived into Fred Moten when I was a first-year in grad school, and the impact of The Feel Trio on my work is ever-legible. It taught me how to play with white space, both physical and literary. One day, I was a poet. The next morning, I was a historical strategist.”

"One of my favorite poems is Nikki Giovanni's 'When I Die.' I love this poem as a characterization of what it means to be a creative black person in this world. We are rejected for being strange but keep moving forward with the headlong hope that our oddity might one day become yet another way future folks can better see themselves expansively. The poem is necessarily surreal in its violences and its sadnesses."

Alysia Harris, author of How Much We Must Have Looked Like Stars To Stars

“A favorite poem of mine is ‘Hell The Human Zoo: (Hope) (lessness)’ by Shane Mccrae. A good poem always twists and writhes not just conceptually, but sonically as well. Mccrae is a master at doing both. What I love about this poem is the way the black man, the one who is constantly watched becomes the watcher. The black speaker who has been dehumanized, studied, and dissected by the end of the poem has mastered understanding the master, while the master is paralyzed by looking. This poem succinctly captures the violence, depravity, and fear that broods behind the system that keeps white folks in power.”

NEXT UP
Beauty
This Viral Black Honey Lipstick Dupe Is Only $5
Beauty
Isamaya Beauty’s New Lipstick Was Designed To “Celebrate The Male Form”
Entertainment
Meet Amy Allen, The Grammy-Nominated Songwriter Behind Pop's Most Honest Hits
Entertainment
Muni Long On The Grammys, Burnout & Not Worrying About The Labels
Style + Culture, delivered straight to your inbox.