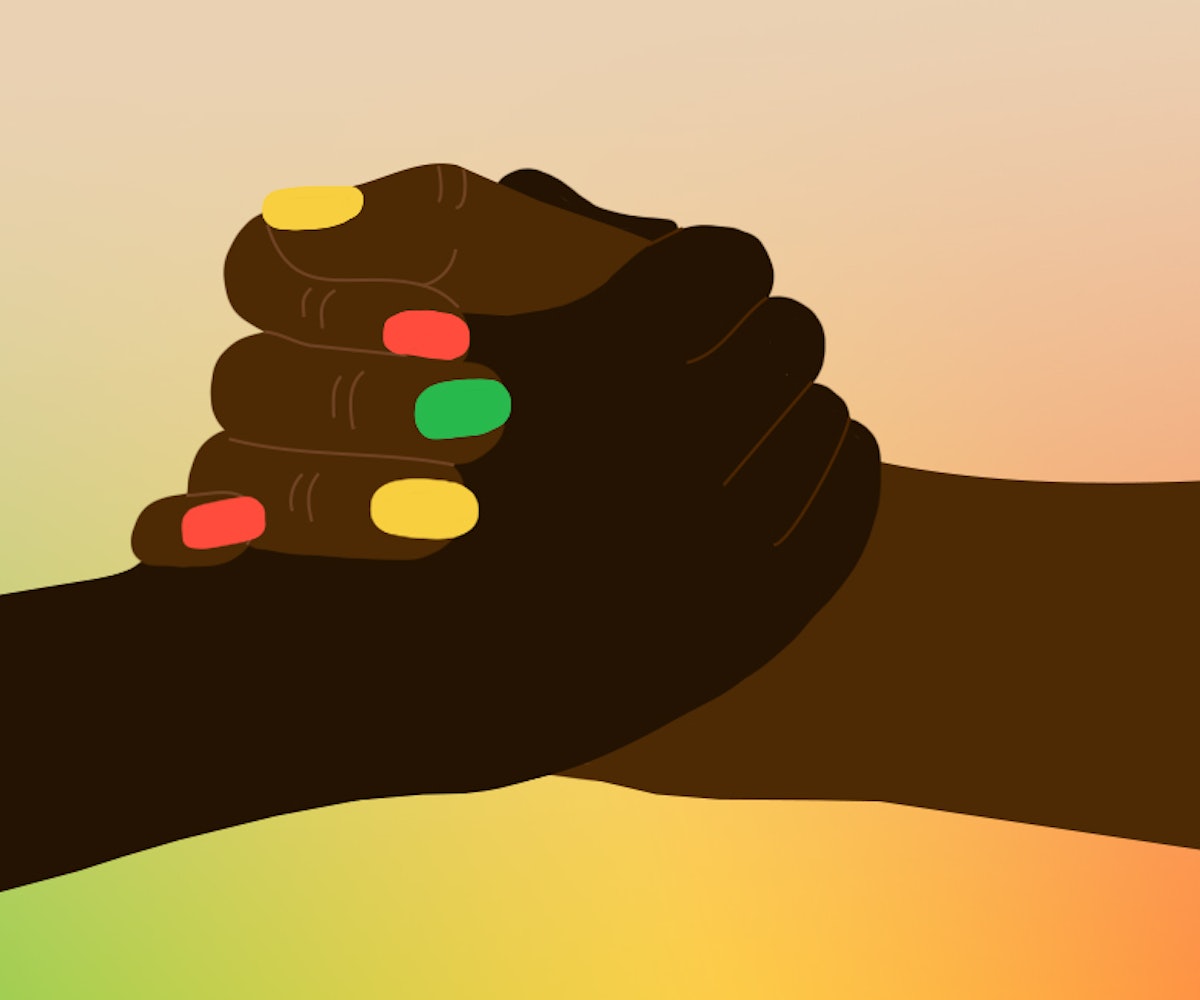 “Without this rage to define me when the morning comes how will they find me? It will be as if I never ever was." — Zora Howard

I feel like I have lived a thousand lives; I am 22. But, I have battle scars, too many broken comrades, and more than enough collective trauma. All of that, though, is what keeps me coming back to this thing we call organizing. Though the word "organizing" has multiple definitions, for most, for me, it means being committed to doing the legwork of building movements, from the smallest to biggest tasks. All of us come into the work scared and unsure of ourselves. It is in those moments of pain, uncertainty, and community that you find clarity. Direct action was the first time I tasted freedom, the first time I was an active participant in my own liberation. The sweet taste of the unknown is what keeps me doing the thing that could kill me every day.

Across the country, black students are risking their lives. Whether from staging highway shutdowns, protesting elected officials, or knocking down Confederate statues, we are the kids that most media, most people, refuse to acknowledge and will always blame for civil unrest. We are an easy distraction, a source of blame, when years of liberal rhetoric continues to fail black communities. We are black students of varying intersections, who are all dedicated to a similar goal, that goal being black liberation from the multitude of systems that are still actively oppressing black communities. It is through social media and meeting on the frontlines of direct action that black college students are leading—and have long led—social change in this country.

When I was 19, along with eight other students from the Atlanta University Center (encompassing Spelman College, Morehouse College, and Clark Atlanta University) all a part of a radical organizing group called AUC Shut It Down, I protested Hillary Clinton during a speech she gave in October of 2015. We decided to do so after realizing that much of Clinton's campaign sought to galvanize young black voters without engaging with us in a real way. After being escorted out of the event for disrupting the event, we were met with her violent Secret Service escort, administrative sabotage from our respective colleges, and student backlash. It was that experience—before the era of Trump—that brought me to learn more about centering my organizing and activism work in black liberation. The Hillary action was the first time I was able to actively fight back against the systems that had plagued my life and made my existence seem expendable.

My story is not unique, black students from all across the country have found themselves radicalized and given space to organize in new and different ways. Whether it be through working on issues like police violence or campus sexual violence, all the way to environmental racism, we all have varied stories and common experiences that keep us tethered to this thing we call liberation work. Though the work is gratifying, the idea that it is glamorous is a lie. Being an organizer in 2018 is nothing like what it was like at the height of the Civil Rights Movement in the ‘60s, we are trying to change a culture rooted in capitalism, homophobia, cissexism (the appeal to norms that enforce the gender binary, and gender essentialism, resulting in the oppression of gender-variant, nonbinary, and trans identities), and white supremacy. The work takes a toll on your body and mind. Many of us struggle with our mental health, housing insecurities, and dismissal from people who tell us we should let things go, and move on.

So why keep fighting? As Takiyah Thompson, a student organizer and member of the Workers World Party and Defend Durham, says, “Fighting for black people, I think, is my way of honoring the fearless black fighters of yesterday who I can thank for where we are today. It would just be corny of me to come from a people who gave us Toussaint Louverture and Marcus Garvey and acquiesce into a system that keeps its foot on black people's necks to this very day.”

Miles Quarles, a screenwriter and student organizer at Virginia Commonwealth University, also speaks to the pressures of organizing but concurs that the strife is worth it. Quarles says, “For me and many, organizing feels like the weight of the world is on your shoulders and there will be days, weeks, or even months where you’ll feel like what you’re doing is futile. The duty of organizing will break you, and it will put you back together by feeding your ego small victories here and there. Being a black organizer is especially traumatizing because it is basically one big cycle of being shown how insignificant your life is. The moment is simply too pressing for me not to be involved in some capacity.”

But that doesn’t mean it’s ever going to be easy. Jonathan Saffold, a nonbinary student organizer with Howard University Resist, says, “When my scholarship was taken from me, [after the nine-day administrative building takeover], I was left to pick up the pieces myself. There is no support system to right the wrongs done to organizers. Student organizers, especially, should know that your organizing will cost you at some point.”

Delaney Vandergrift, a community organizer and the student body president at North Carolina A&T State University, makes clear that there are also difficulties in not being seen as the “right” kind of activist: “Each night was a different type of trauma that I thought I’d process the next day in between classes, except there was no processing. Only distraction. Only anxiety. How can someone focus on being a student leader after seeing my community members doused in pepper spray, violently arrested, and beaten by the police? The following semester the adrenaline wore off, and my mental health depleted right along with my GPA. I want to be clear that organizing for social justice in the spaces and communities that I am in is exactly what I believe I should be doing. I believe wholeheartedly that all people have a calling and I know that mine is to do the work of the people for the people. There is no grace for the student organizer that doesn’t fit the acceptable description of activist: black, cis, straight, and male.”

It can be difficult, then, to even feel like you have a place in the world to protest, that you have the ability to survive. Da’Shaun Harrison, a nonbinary writer, organizer, and public speaker, says, “Survival, for me, looks like surrounding myself with other black queer people… always. We hold each other in ways that we don’t often get held by others, and it matters to me that we create space amongst ourselves to love and protect each other—just as Assata Shakur said we should.”

But it goes beyond mere survival. Ramelcy Uribe, a Dominican queer educator and youth worker, explains, “I’m really trying to figure out what it means to be beyond surviving. I’m trying to thrive, and that means challenging my own internal glorification of hustling to live and financially struggling for the sake of ‘the work.’ I have to trust that I can ask for what I need and my community will show up.”

It's a balancing act that few have figured out. It can seem daunting at times to be in multiple worlds at once and feel alone in the midst of it all. You have to be able to check your ego, privilege, and assumptions at the door when calling yourself an organizer. It can be easy to get caught up in the everyday petty arguments over how this verified Twitter activist is co-opting a movement, of that celebrity has been canceled this week, all the while hoping to god the HBCU vs. PWI debate dies forever. Yet you have to center your own care and find ways to do more— to not just survive but actually thrive in a world that sees you as expendable.

I forget that at my age many of my organizing elders were all in the trenches, that folks like Mumia Abu Jamal, Assata Shakur, and Angela Davis all were in harsher circumstances with fewer resources and fewer opportunities. So I have to sit back, breathe, and realize that I and my fellow organizers are not alone in this movement. We are all trying our very best to create the world that people treat as a joke—a world that people say will never happen. As organizers, we have to be dreamers before anything else, molding starshine out of clay and taking the scraps of black joy we find in the everyday. That is the real magic of it all, turning the mundane into fuel for the deep beyond—even if it means building the rocket ships for ourselves.