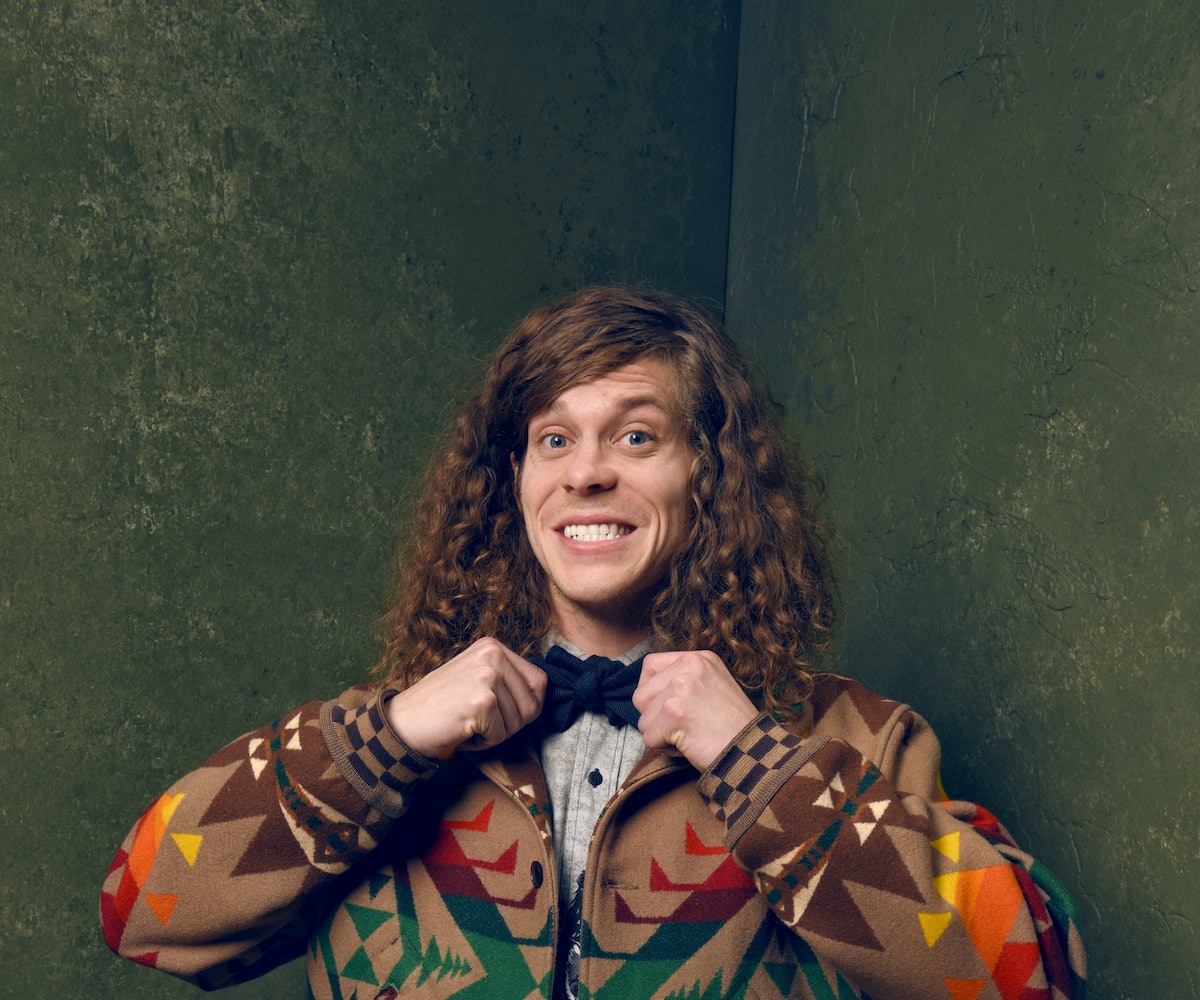 As one third of Comedy Central’s boozy Workaholics (alongside Adam DeVine and Anders Holm), Blake Anderson has a reputation for being a bit of a party animal. But Anderson, who in real life is married with a child, is anything but a slacker. For starters, Workaholics is now in its fifth season and has become one of TV's most reliable comedies thanks to its irreverent plotlines centering around three manchildren as they attempt (and fail) to act like adults. In addition, Anderson and his wife, Rachael Finley, are the masterminds behind an equally irreverent '90s-inspired clothing line dubbed Teenage that launched in 2013. And as if that weren’t enough, Anderson's new movie Dope, a vibrant comedy about music nerds navigating the rough streets of Inglewood, California, just sold at Sundance for seven million bucks is primed to be a breakout hit when it's released this summer. Fresh from Sundance, we spoke to Anderson about life as a comedy star (free shots!), sharing the stage with Broad City, and why being bored is the best thing that ever happened to him.

How’s it going man? Where are you right now?

Oh man, the city of dreams.

It truly is. Go out and catch it.

I know you just got back from Sundance, where your movie Dope was a huge hit.

It was my first-ever Sundance experience and I was saying to myself, "Is this how it's supposed to go?" Everything fell into my lap. It was basically me getting free stuff all day and then the movie getting picked up. I can’t complain.

I haven’t seen the movie, but it looks amazing. It even has A$AP Rocky in it.

It was quite random. We actually met up at Sundance. Every time you meet rappers, you just hope they’re not total dickheads hardened by the streets, but he was actually a really cool dude. Offered to smoke me up and everything. That’s a cool homie right there.

Tell me about who you play in Dope.

In the movie, these kids from Inglewood stumble upon a brick of good molly and they don’t really know what to do with it. I explain to them that the way to get rich nowadays is to sell drugs online. So I’m kind of like the mad genius behind the internet hustle game.

Every time I see you doing press, whether it’s at Sundance or what not, you’re always looking pretty fresh. Then I find out that the reason for this freshness is that you run a clothing line with your wife inspired by the '90s?

Yessir! It’s called Teenage and it’s kind of just a new endeavor for me. We started it in 2013 so we’re pretty new in the game. It’s a lot of fun and just something I’ve always liked.

What was the idea behind it?

I was sort of pulling from my teenage years. Growing up in the '90s had such a wealth of creative and zany stuff.

I was like everybody else: very bored. But when people hear the word “bored” they think of it negatively, but I don’t think of it like that. Boredom is kind of the seed of creativity. When you have nothing to do, you start to really think outside of your box. That’s when me and my buddies started to pick up a video camera and started filming, whether it was an original short or a public access backyard wrestling show. As a teenager, I had a pretty tight crew of like seven dudes and we always tried to stay busy. We rode scooters we modified or were always doing some random project.

Did you have that long curly hair of yours when you were a teen?

It was curly but it wasn’t quite as long. I had more of an afro. I don’t know, I was kind of scared since my dad didn’t want me to have long hair, so every time there was a school photo day I’d go back to square one.

I read on Wikipedia, which is never wrong, that at one point you were peer pressured into cutting those amazing locks. Is that correct?

That would be one of those false Wikipedia write-ups. I don’t know how that got in there. No, the only person who would pressure me to cut my hair would be my father, but other than that nobody got me to cut my hair. I actually went out of my way to keep it. When I moved to L.A., I was doing pizza delivery at a nice restaurant called BJ’s and they said that my hair couldn’t touch my shoulders, so I’d wake up 30 minutes early just to pin my hair up. I looked really stupid, like Thomas Jefferson, but at least at the end of the day I could pull the bobby pins out and let the mane flow, you know what I mean?

Of course! Let’s talk about Workaholics. It’s been fun to watch this show grow to its current status as a crown jewel of Comedy Central’s schedule, especially being paired up with Broad City on Wednesday nights.

I think you’re right. I’m not sure I’m using the word correctly, but there’s definitely a sweet synergy going on Wednesday night between us and Broad City. I’ve been watching their episodes and I’m very pleased with their work. I think they’re really bringing it this season and coming into their own with their characters and I’m laughing along with them. For Workaholics, we’re doing a lot of the same. We’re just the same stupid three dudes and it almost feels like we’re the last of the bro breed. The girls have the stage with comedy now, but we’re still bringing that male-centric stoner-drunk vibe, and we’ll keep making them until they tell us to stop.

I know you and the guys ascended the show-business ladder together and work on this show together, but how often do you actually party together? And who throws the party?

Now that none of us live together it’s a revolving door. The Super Bowl was at my house, Adam likes to throw those late night after parties when the bar closes, and Anders is the barbecue dude. We just had a wrap party where we all got drunk together. Sometimes I trip out on our friendship because we’ve been together for eight or nine years now and dude, that’s a long time for anybody to be in a relationship with anybody. We really maintained a good friendship without any big bumps, and I think that’s because it’s all about the team. We all break off and do our own stuff and nobody gets mad about being a solo star too, but there’s always that rock, that friendship. I don’t think that’ll ever change. It just gets cooler with time.

When you three guys walk into a bar together, do people flip out?

It’s madness. It always is. When we’re in a college town and we walk into a bar it’s just a hurricane of shots and pitchers. It’s definitely a force to be reckoned with. We’re still learning the balance of it. You can’t take every shot that’s offered to you. And if you end up doing that, just hope that one of your boys is going to carry you home.