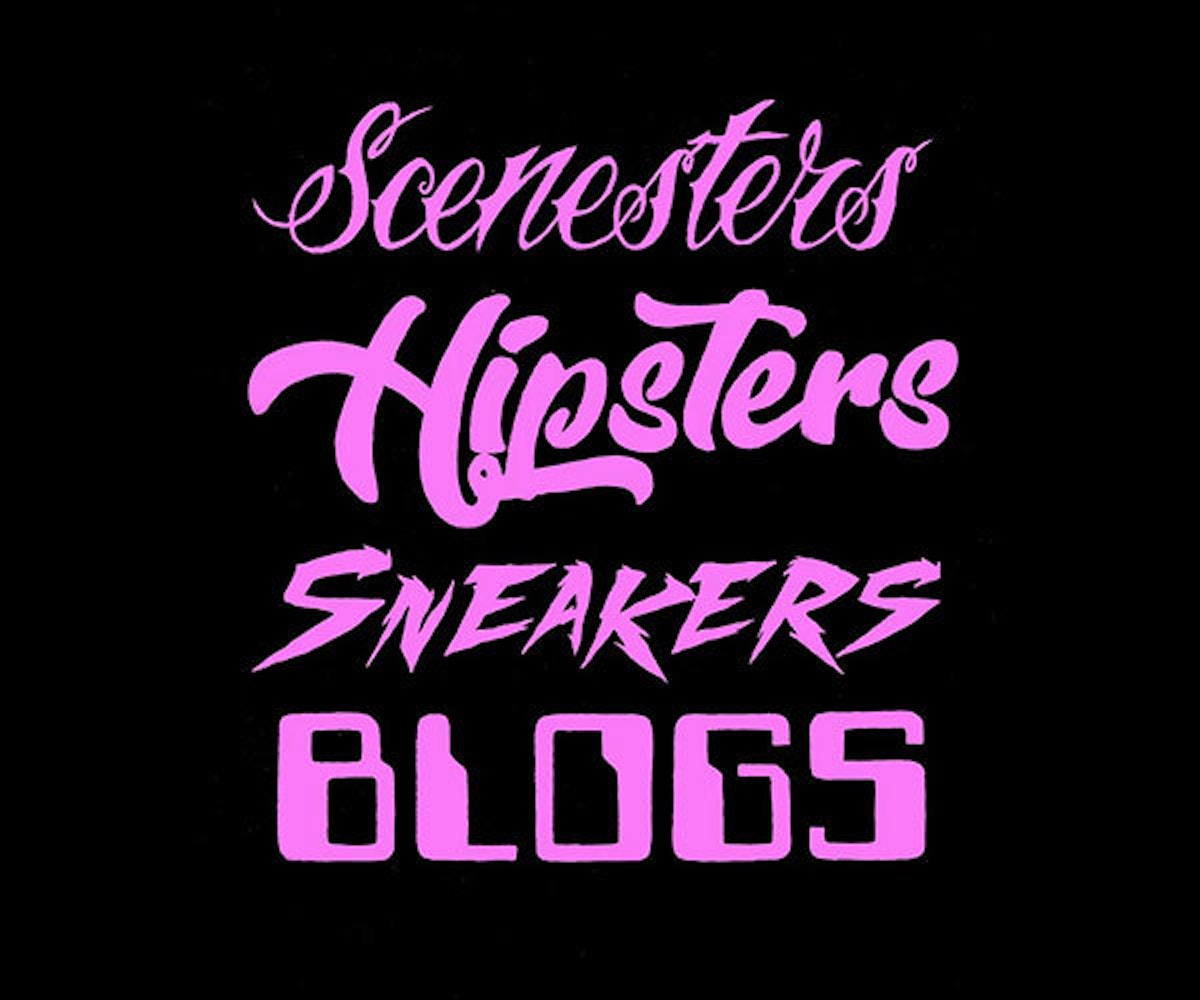 The time has come to honor a moment in time perfumed by Sparks and soundtracked by blips and bleeps that got the people going in sweaty basement parties. A time between 2006 and 2012, where internet friendships blossomed IRL at clubs and hazy backrooms. The bloghouse movement, it is known, wasn't just a rebellion of sorts; it was a generation of youths, dressed in head-to-toe American Apparel, caught between the blogging heyday and Facebook's monopoly, just trying to make sense of the shrinking world around them.

Meaghan Garvey and Lina Abascal lived that bloghouse life, albeit in Chicago and Los Angeles, respectively. Since then, the two have turned those lived experiences into careers. Now, they're combining talents to create Bloghouse: The Book. Together, they're bringing back this profound niche moment in time with cultural criticism, original art, artist interviews, and archival photos from some of the era's most viral photographers. To say issa time capsule would be an understatement. It's a bible of sorts, preaching the good word of doing the d-a-n-c-e.

Ahead, we catch up with the duo right before their Kickstarter wraps and the book goes into production. You can support it here. See you on the other side, qtz.

What was your introduction to bloghouse?

Lina Abascal: Growing up in L.A., I was making a transition out of emo and Warped Tour hardcore at around 15. I started to get into dance—or “danse." I got into The Bloody Beetroots and MSTRKRFT as an extension of screamo and hardcore; it’s all still headbanging sweaty music. I resisted a lot of the cool kid surf culture at my high school and instead opted for clubs in Hollywood, in Downtown, in South and East L.A. The suburban house party culture filled with what we’re now calling bloghouse. Every Tuesday, this club called DANCE at Arena on Hollywood and Las Palmas became pivotal to my experience. It housed like a billion underage kids in a multiroom mega club with metal detectors. That’s where I grew from clunky digital camera MySpace scene selfie culture to being an aspiring, low level, ‘It girl’ type. There were, like, 70 house photographers. My friends and I would blast that shit on our MySpaces, make friends with every DJ, every door girl, got on the list for the maybe $5 event, and it grew from there. Neon American Apparel, slouchy boots, mushroom hair from headbands, and the heel-clicking dance that goes so well to The Rapture.

Meaghan Garvey: It’s funny, because when I first started becoming obsessed with “the scene,” I was living in the lamest place in the world, aka South Bend, Indiana. A super-depressing place, but I had a small group of friends—fellow college dropouts and low-level degenerates—who put me on to stuff like the Hype Machine and Hipster Runoff and all the dope MP3 blogs. I was absolutely obsessed and would spend all day downloading tracks to DJ at our sketchy house parties, and designing these insanely embarrassing graphic tees on Photoshop that my friend and I were certain would become a fashion line in the near future. One of them said, “NOBODY LISTENS TO TECHNO.” I don’t even know. But we would try to drive to Chicago as often as possible to go to parties at places, like Sonotheque and Evil Olive, where you might bump into Kid Sister or one of the Flosstradamus guys or a variety of other minor “scene celebs.” It was the best. I remember driving back to Indiana one night with, like, 20 ecstasy pills hidden in my bra (in case I got pulled over? Probably a bit dramatic), blasting Fake Blood “Mars,” just feeling like, “This is LIVING!”

How'd you get over feeling like a poser, if you ever did feel that way?

MG: That was one of the cool things about that whole era, honestly—it was totally inclusive and not snobby at all. I mean, obviously there are a lot of hilarious and tacky aesthetics to it all, looking back, but I always loved that it felt genuinely diverse and full of people who just liked to have a fucking good time. The internet felt so different then, too, and there wasn’t this level of competitive personal branding at play. To some degree, I’ve always felt like the outsider who somehow got invited to the party, but it was chill. For instance, there was this one local DJ in Chicago who I’d always thought was so cool. Then one day I was trying on clothes in the American Apparel changing room and an employee accidentally opened the door on me, more or less naked. It was the same DJ, and I think in that moment, we instantly became homies. That’s a real Bloghouse Friendship tale for you right there.

How has it been wrangling artists and musicians to take part in the book? What has their reaction been?

LA: We made a huge list of people we thought were important to the scene including some GOAL DREAM people, some of which have expressed interest! As the concept for the book has expanded, we’re looking to get one of our dream people to write an introduction. It’s a lot of emailing, publicist tracking and trying to make a case that these artists should talk about something over ten years old instead of promoting whatever they’re doing now, which is kind of hard, but a lot of them get it.

What impact do you hope the book will have?

LA: I think there’s a lot of people who aren’t familiar with the term bloghouse who don’t think this is for them but actually were ingrained it in more than they realized. I’d love for those people to become more aware of the bigger picture and draw parallels between their involvement and the whole scene. I think it will give a lot more context to where we’re at now with big EDM and festival culture and online music discovery.

MG: Yeah, I also think it’s super important to have archives of cultural moments like this, that are kind of defined retroactively. (Like, nobody was using the term “bloghouse” at the time; it was just this undefined thing that was happening.) It makes me sad that all this shit I used to love is now wiped from the internet, and I wish I’d had the foresight to save more mp3s from that era, or archive my favorite Hipster Runoff posts, because so much of that is totally lost to time now, just a bunch of dead Zshare and Megaupload links. So there’s that element—just wanting to preserve these memories in some tangible way. But on a deeper level, since we’ve started this project, I’ve honestly felt spiritually energized by tapping back into how I felt at the time, the sense of discovery and possibility and excitement. Maybe that’s corny, but if other people get that from the book, then I’m happy.

Where can we find bloghouse's influence in today's current music scene?

LA: I think with the explosion of festival culture and the Soundcloud generation there are elements of bloghouse culture, but on a more mass consumer, readily available scale. I think with the way dance music has seeped into mainstream pop music is something that bloghouse was really making its way towards, from Kanye with Kid Sister to Calvin Harris’ journey to MSTRKRFT and John Legend being a great example of a dancified ballad.

MG: It's hard to concisely articulate its influence, I think, because bloghouse culture kind of just dissolved into the bloodstream of mainstream culture. “Genre” was such a more rigid and relevant construct in the mid-2000s, as opposed to now, where everything is everything. And dance music felt like a niche interest; I honestly believe that without bloghouse, you don’t get to the mainstreaming of EDM and the festival boom. And it’s kind of underwritten, but bloghouse had this pretty profound influence on rap, too. I mean, lowkey, Kid Cudi started off as a bloghouse rapper. He might not use that term, but it’s true!

Do you believe we'll ever experience another movement like bloghouse?

MG: I honestly don’t think it can ever truly “come back” or have a revival that goes beyond nostalgia; it had to happen exactly when it happened. The internet as it exists right now simply can’t foster that kind of movement. Bloghouse might have been the first and last movement in dance music that could flourish online. And Lina’s right, Soundcloud rap is probably the current equivalent, but at the same time, as much as that’s technically an “underground” rap movement that went mainstream, it’s also so tied up in major label corporate fuckshit. The internet sucks now; everyone would probably be better off building things in real life.