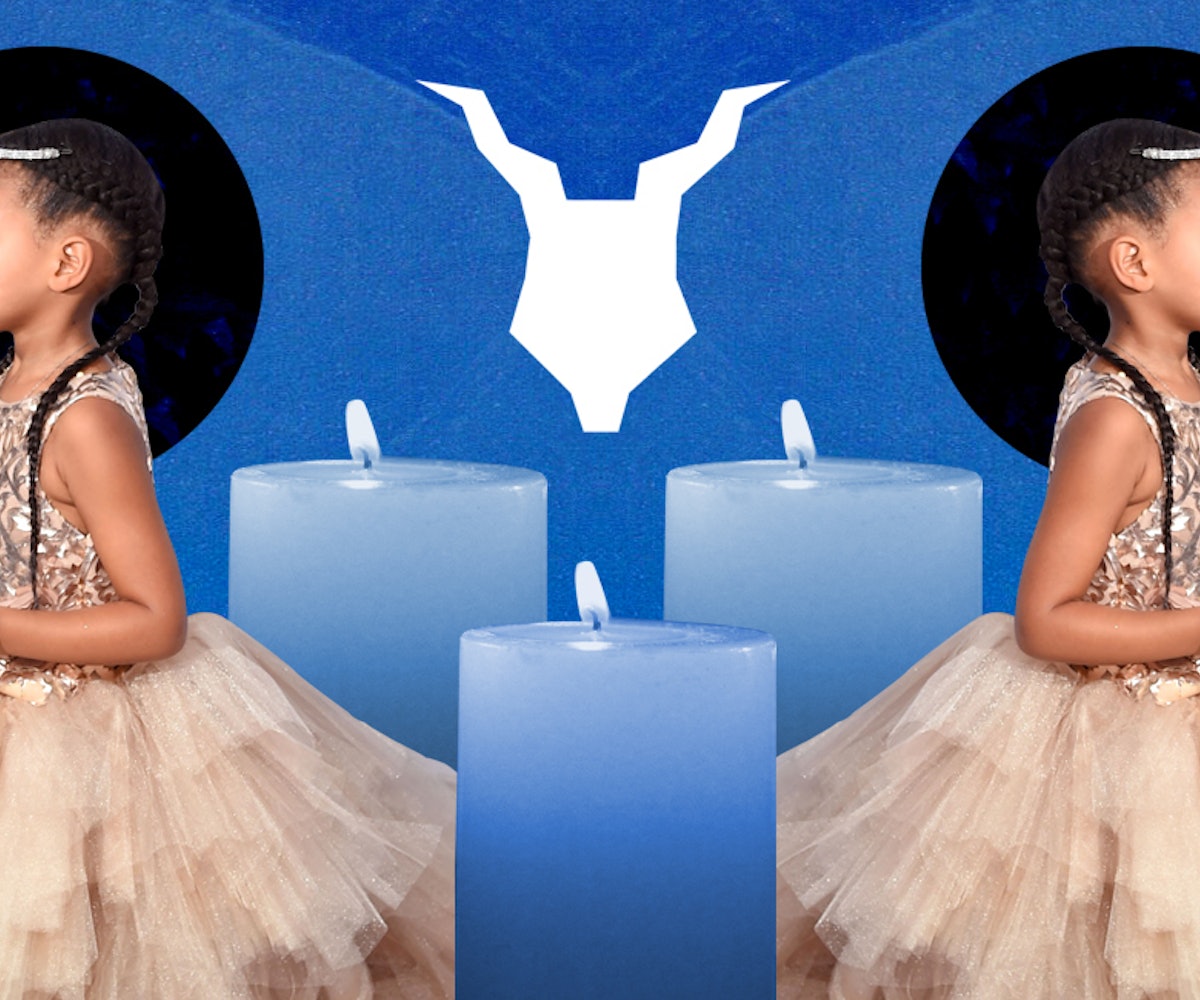 Following the premiere of Jay Z’s “Family Feud” video last week, a visual featuring Beyoncé and Blue Ivy, a tweet about Blue Ivy went viral because it was the realest thing ever tweeted. It read: “Blue Ivy is an entrepreneur, a singer, a rapper, AND an actress. The hero we all need.”

At just five years old (going on six on Sunday), the heir to the Knowles-Carter throne is already a person we can all look up to for how much she’s accomplished at such a young age. She’s an inspiration, a prodigy, an icon in the making. She’s also a Capricorn, so this all makes sense.

Out of the 12 signs, Capricorns are the most ambitious, hence Blue’s already impressive resumé that she likely has typed up and ready to pass out. Take these snippets from our guide to Capricorn, the sign that starts and ends every year: “Loyalty, grit, and true hard work are Capricorn’s currency, carefully cultivating these traits in themselves and valued above all else in those they bring into their environment.” Then there’s: “Capricorns are born of undeniably strong stock, impressing others with their obsessive willingness to power through hard work.” Outside of being determined, they’re very wise and down-to-earth, but they can also be low-key greedy and kind of condescending. Which brings us back to Blue.

Little is known about the young Cap outside of what her family chooses to share and what invasive fans and paparazzi have captured. But, from what we can glean, as one Twitter user put it: Blue Ivy only has one mood, and that is superior. Take a look at these pictures for a second and tell us that isn’t the face of someone who knows she can get away with doing the bare minimum in life and still achieve more than you ever could even on your best day.

Also, yes, as it appears, Blue might not be the “sunniest” child. It's possible the camera is just constantly catching her at a bad time. Or, maybe it’s that she doesn’t enjoy having cameras in her face at all. Understandable! But, it’s likely she’s just shady. Caps can’t help, nor hide it. Shadiness is a natural disposition. Capricorns also just know what they want, and we all know what kind of reputation a woman on a mission often gets. All it really means, though, is that the woman is a naturally born boss.

That glass ceiling y’all like to talk about? Doesn’t exist in Blue’s world. As she let us know while rapping on 4:44, she’s “never seen a ceiling in her whole life.” Don’t tell her the sky’s the limit when there are footprints on the moon is all we’re saying. Think back on the way Blue delivered the adorable “Good job, Bey” line on “Daddy Lessons” and tell us it doesn’t come across as if she’s the mom and Beyoncé’s the one waiting on approval. A couple of years ago, Solange posted a picture of Blue with the caption “[Blue] does her OWN photo edits/selections… as she should.” Which also makes me think that this picture of what appears to be Blue standing behind a security guard while her mom poses, albeit hilarious, likely wasn’t Beyoncé telling her daughter to get out of her shot, but rather Blue choosing to opt out of yet another of her mother’s ‘gram photo shoots. Because that’s what a person in control of her own narrative would do.

If you get into more chart details, you’ll learn that Blue is most likely a Virgo rising and that she has her moon in Cancer. I’m not really sure what most of that means, but I do know that Beyoncé is a Virgo which, we assume, is why they look like best friends in most pictures. Her grandmother, Tina Lawson, is another Capricorn, while Solange and her great-grandmother, Agnéz Deréon, are Cancers, so there’s compatibility all around… for the most part.

It was rumored that Beyoncé was hoping to have Rumi and Sir in April/May so that they would be Taurus and all of her children would be earth signs and live harmoniously together. She got Geminis instead. You win some, you lose some. And, in the case for Blue, it’s a loss because, let’s just say, Geminis often border on crazy. That and earth and air signs don't usually mesh very well. What about her fiery Sagittarius father? Well, astrological icon Susan Miller created a birth chart for Blue when she was born, which explains that the two will be close but that “he may take a too heavy-handed approach in his quest to teach her the value of a dollar.” She goes on to say: “He will want her to take his advice without question, but as she grows up, with her Mars rising, she will have opinions of her own—and could easily rebel.” Which bring us to the next facet about Capricorns: They love money.

Let’s go back to the “Family Feud” video. Around its release, a different meme circulated which shows Blue talking—or, is it arguing?—with her dad while on set. It reads, “Blue re-negotiating her appearance fee after realizing the music video would be a Tidal Exclusive.” Remember she’s five with probably no concept of money yet, but given the Cap outlook, it’s probably not too far off.

Jay Z and Beyoncé are worth a combined $1 billion, which means Blue will be inheriting at least $333 million of that money. Remember, though, Capricorns enjoy working, so don’t expect her to just rest on her parents' laurels. If we’re going off the lineup of Capricorns alone, there’s a chance she can (hopefully) become the next POTUS like Michelle Obama or have her own talk show like Ellen DeGeneres or enchant the world like David Bowie or have an illustrious acting career like Denzel Washington or become one of the greatest athletes of all time like Muhammad Ali or LeBron James. She can truly do anything, and not just because of who’s raising her, but because Capricorns don’t settle for anything less than what they deserve.

Because you know who else was a Capricorn? Jesus. And if there’s anyone else who harnesses the gift of walking on water, it's either Beyoncé—or her first born.