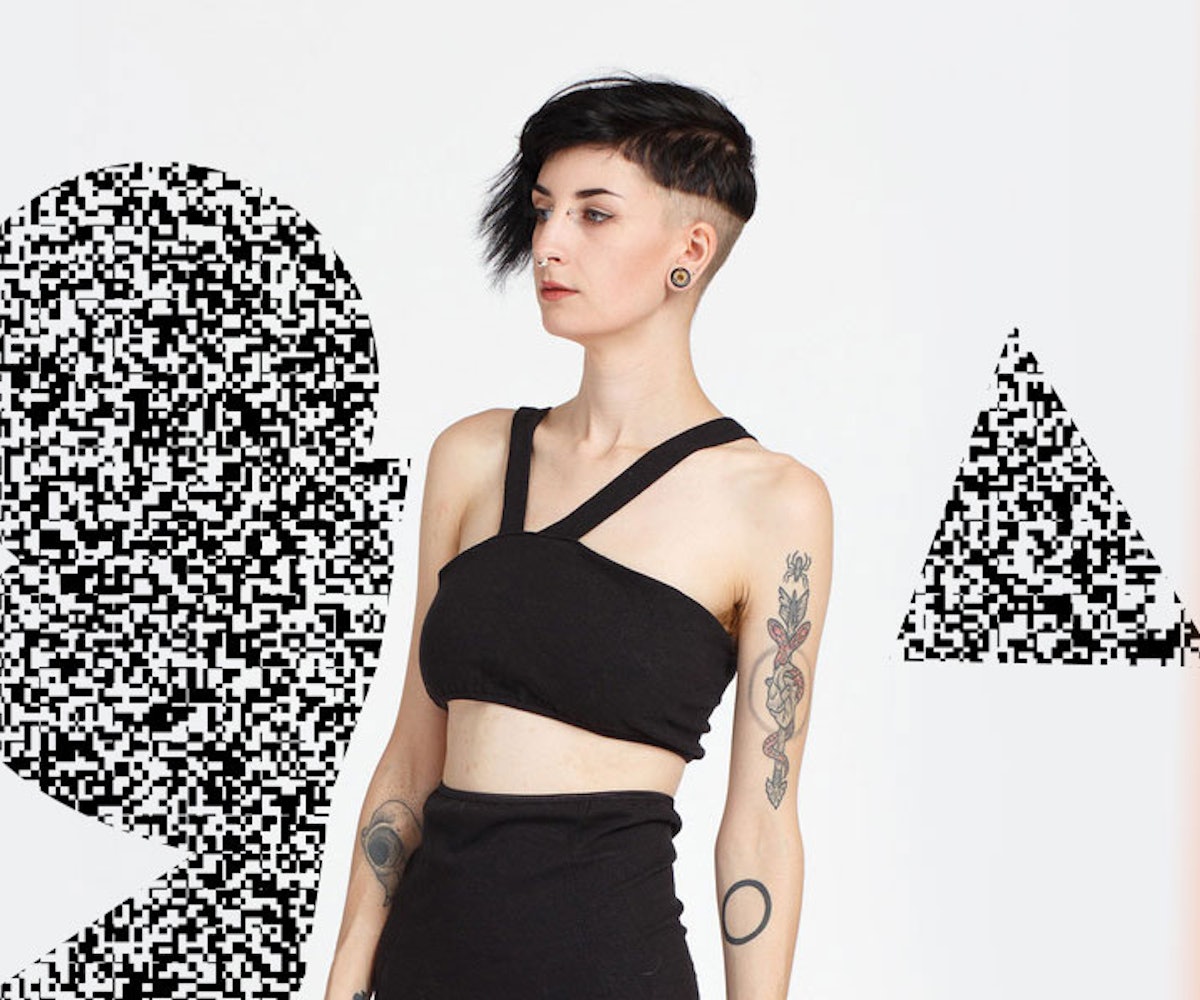 I meet Jeanna Kadlec at a coffee shop in Downtown Boston. I’ve been looking forward to meeting her since I started following her shop, Bluestockings Boutique, on Twitter almost a year ago. Bluestockings is not your typical lingerie store, and Kadlec is not your typical entrepreneur. In an industry known for pandering to the male gaze, Bluestockings is unabashedly designed for people who don’t typically see themselves represented in the ads for lacy underthings or that grace the glossy pages of fashion magazines. Bluestockings was created for LGBTQIA folks, to fill what Kadlec felt was a gap in the market.

When we meet, Kadlec enters wearing a leather jacket that hides a Wonder Woman shirt beneath it—symbolic of her life in so many ways, I will come to learn. Waiting in line for our coffees, we chat about the neighborhood we’re currently in, Downtown Crossing. It’s a neighborhood that’s fast gentrifying, and a conversation about displacement and poverty is right up this entrepreneur’s alley. “I’m writing an article about lingerie and class privilege,” she tells me.

Using her background as a doctoral student in English Lit, Kadlec pens informative blog posts for Bluestockings’ site that offer critical analysis of the lingerie industry, tackling issues like queer representation and lingerie, why we call bras "nude" when they’re just for white women, and being eco-friendly. “I really am aware, for people who are living in poverty—and this is partly where the article that I’m writing comes in—we talk about bras as both fashionable and functionable. But having a fashionable and functional bra is a luxury that is not always possible.” Which is why Bluestockings does a monthly bra drive for Rosie’s Place, a homeless shelter for women in Boston.

As a queer femme, Kadlec says that she’s always loved shopping for lingerie. But she’s had a hard time getting partners or friends to come with her. “I have friends who won’t go in with me. They’re like, 'It’s great that you like lingerie but there’s nothing for us.'” It was through these conversations with her community that Bluestockings Boutique was born. Over the course of 72 hours, Kadlec decided that this store needed to exist, though she swears, “I don’t do things impulsively.” Yet, with no business background, no backing, and no money, she decided to make Bluestockings happen. “I was like, I’ll just find a way to do it,” Kadlec laughs.

Kadlec dove head first into the lingerie industry, determined to learn as much as she could and identify other gaps in the market and ways that she hoped Bluestockings could fill them. “I did a lot of research,” she tells me. “A lot of research.” And she asked herself perhaps the most important question: “What does lingerie for LGBTQ people look like?”

She knew there were some things that needed to be included, like a wide range of sizes, ethically manufactured products, and support for independent designers, rather than the well-known brands you’ll find when you walk into a Macy’s or a Nordstrom. She looks at me and asks, “Did you know that all those brands may look different, but pretty much every brand in Macy’s is owned by the same company?”

Kadlec wanted to be the anti-department store. “I just wanted to support independent designers who are more likely to be eco-conscious, and they’re sourcing fabrics sustainably.” She intensifies as she continues, “Fashion is the number-two polluting industry in the world, second to oil. It’s oil and then fashion. I think that that says everything.” Kadlec talks about lingerie in a way that I’ve never considered. This isn’t just about lacy undergarments. There are real implications to the business practices of these large companies. Kadlec is still going. “It’s absolutely mind-boggling the amount of waste that this industry produces with no impetuses in place for recycling, reuse.”

It was because of this that Kadlec decided that really privileging independent designers was important to Bluestockings. She says that holding that value has helped attract the kind of customer that she wants, too. “These are people who are ethically conscious in their own lives. Like, these are people who shop local, shop organic. And there’s a lot of class division in that and I’m aware of that.”

We’re back to talking about class privilege, which Kadlec tells me she is incredibly conscious of, due to her own working-class background. So, how does she reconcile running a lingerie boutique whose price points may be out of range for the folks she wants to serve? Kadlec has clearly put a lot of thought into this question. “I’m trying to put my money where my mouth is.” She hopes that by supporting independent designers, like Origami Customs, who make trans-specific under things, she can help other entrepreneurs in the queer community make money. But “it’s not perfect by any structure of the imagination,” she sighs. And that’s where the charitable donations come in. On the 18th of every month—the site’s birthday—Bluestockings donates 18 percent of their profits to an organization doing important work. Jeanna explains, “I’m trying to raise awareness for these organizations through my very small platform, but it’s a platform I have.”

Despite being new to business, Kadlec clearly has a knack for it. She’s incredibly in touch with her customers, and who is accessing her store. She notes that, despite the hype surrounding Bluestockings, sales have been slow to build up. She’s thoughtful about why this is. “I think it’s partly that lingerie is something that people take a long time to decide on. Like, especially if it’s an investment purchase.”

But people are buying things, and they’re items they’re buying speak to Kadlec’s instinct about the gaps in the lingerie market. Her best-selling items are what the industry would call “androgynous” bras—“but I just call them ‘minimalist,’” says Kadlec. They’re bras without lace, bows, or frills. She cites small-bust specific bras by Sophie Hines and non-padded bras by Claudette. But far and away her best-selling products are the Nubian Skin line of bras: flesh-toned bras for people of color. It’s clear that her customers are coming to her to get what they can’t find elsewhere. If they wanted Victoria’s Secret, they’d go to Victoria’s Secret.

And people are taking notice of Kadlec’s ability to read her clients—other businesses are reaching out to Kadlec for help reaching their queer customers. Kadlec says, “And, you know, sometimes it’s as simple as changing your pronoun.” Kadlec gets animated again, as I hit on another angle that clearly gets her going. In the lingerie industry, “I encounter the attitude that fashion is above politics and above cultural context,” and she sees this attitude as incredibly privileged. She wants the rest of the industry to understand that fashion is not divorced from reality.

And she notes that this attitude infiltrates every aspect of the industry. “It’s what you’re naming your colors—are you calling a bra nude that’s a white woman’s shade? Is your price point invariably excluding certain groups of people? Are you only selling your stuff in major metros and have no online store? That’s an issue of availability to rural people and people in other spots of the country.” But these “conversations in the industry completely ignore the reality of people’s everyday lives and how that informs their buying choices as consumers.”

She says that she often has this come up when people fail to understand why her boutique caters to queer people. She says people say to her, “But queer people can go into any boutique.” So she follows up with, “Like, the boutique in Texas where a trans woman was asked for identification and because it didn’t match, got kicked out?” She continues, “This is why lingerie boutiques need policies and they need to publicize if they’re inclusive to their trans customers, and they need to train their employees on how to work with their trans customers. Or else that shit happens.”

So what does the future hold for Bluestockings Boutique? Kadlec laughs and says that her biggest goal is to get to a point where she can focus on Bluestockings 100% of the time. She currently manages all of the social media, site management, and email correspondence in between working full-time as a nanny. I ask if she ever envisions having a brick and mortar location. “I first envisioned it as a brick and mortar store, because we don’t have many physical queer designated spaces and I think it’s really important for queer people to have a safe space where it’s okay to come.” But the response to Bluestockings has been so strong that Kadlec has reconsidered. “I like how accessible we are as an online retailer.”

She’s also just wrapped up the very first photoshoot for Bluestockings, so they can create their own imagery for the website. It’s something that’s been a huge goal of Kadlec since they launched. She wants to see more queer people in underwear. The shoot was entirely queer, including the photographer and the six models. The models include someone who has had top-surgery, as well. Says Kadlec, “If people who are explicitly queer are definitely not represented, people who are trans are no where in lingerie imagery.”

I wonder if Kadlec realizes what she’s accomplished in just six short months. She’s tackled an industry that was completely foreign to her, and she hasn’t sacrificed her politics in order to do it. She’s brought her whole self to an industry that needs more people like her, and she’s bringing the rest of us with her.