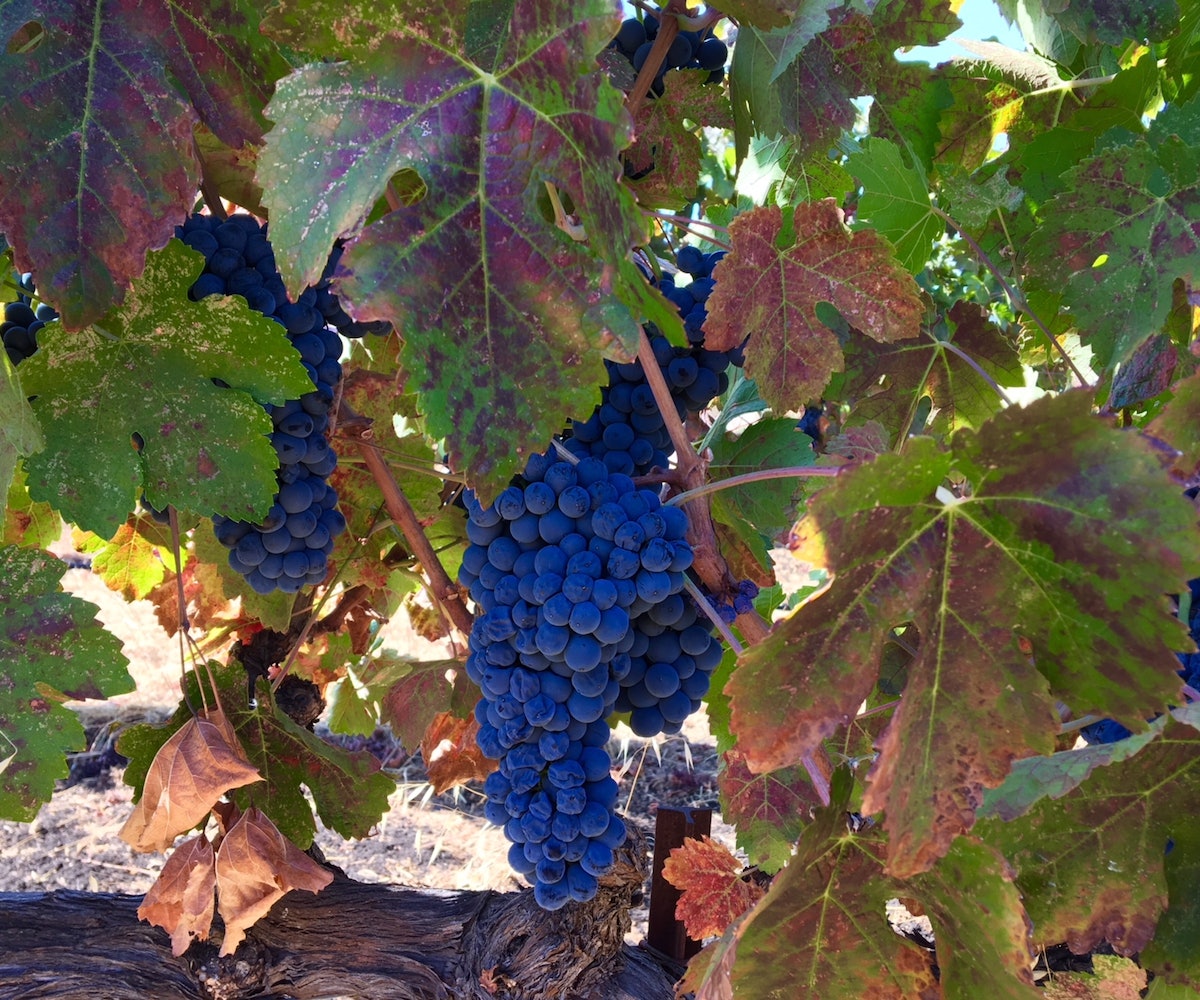 It smelled like a church. There was the pervasive musty smell of wet cement, a cold spice scraping up against the inside of my nose, a faint sour bite making my jaw tense. But I wasn't in a church. Or maybe I was. The ceilings soared to the cavernous height of European cathedrals and goblets of wine were being offered; the effervescent liquid was ceremoniously sipped, tasted (are those notes of peach? honeydew?... blood?), and spat into the long, narrow troughs that lined the floor. It was definitely a communion of sorts, though one that left out any all-powerful father and son, it was all about communing with the mother, with Earth herself.

Does this sound a little over-the-top? As if I weren't just drinking chardonnay, but rather, you know, Kool-Aid? Maybe. And yet, as I stood inside the vast building that held row upon row of towering fermentation stations, each holding countless gallons of proto-wine, including merlot, zinfandel, rosé, pinot noir, and many more, it was hard not to feel overwhelmed in a quasi-religious way. I hadn't been expecting a transformational experience when I went to visit the Mendocino County grounds of Bonterra Organic Vineyards, but from the moment I found myself winding through golden-grassed hills, to when I stood watching truckloads of freshly harvested grapes being unloaded in a great purple-blue bruising crush for processing, to when I stood at the top of a mountain ridge with Bonterra's lead winemaker, Jeff Cichocki, and looked out over the rows upon rows of neatly aligned grape vines, bees buzzing and butterflies flitting everywhere, I realized that I was undergoing a change, one that felt pre- and post-religious all at once—one that felt natural.

I had come to California because I was interested in learning more about organic and biodynamic farming, specifically as it pertains to wine. Like, oh, pretty much everyone I know, I've become more and more invested in making sure that the things I put into my body are as devoid of harmful chemicals as possible, but my interest in organic farming goes beyond myself, and extends into putting more care into how we are treating the land—particularly as we are faced with the looming specter of catastrophic climate change.

Nothing seemed particularly ominous as I walked through the vineyards late last September. Rather, it felt Edenic. Mendocino County has a very low population density, and as I was led up a steeply curving road to the top of the vineyards in Hopland, I thought I'd be more likely to see deer, coyote, or even bears than other people. (In fact, as Cichocki told me, "the bears have been getting into the grenache" as of late.) The air was still, and even the sounds of distant cars were barely audible. It was the kind of place whose beauty is remarkable—literally, I couldn't stop myself from saying, over and over again, how beautiful it was. Words failed me, so stunning was the interplay of velvety green vines and the vast expanses of tawny hillside. It was the height of the dry season, or, as Bob Blue, Bonterra's founding winemaker, told me, it would have been a lush, verdant setting, more like Ireland than anything else.

These extremes in climate-related conditions are typical for California, which, as a state, has been dealing with extreme weather for some time now. Part of that is due to long-established weather patterns, but not all of it, and recent droughts and fires are thanks to the larger climate changes that the whole world is facing. And farmers are on the front lines of noticing these changes as they are happening; their livelihood is the land, and its health is of paramount importance to them.

This, then, is why I was so interested in talking to people who are in touch with the land and committed to treating it with the reverence it deserves, by refusing to inundate it with pesticides and promoting biodynamic farming, which is predicated upon promoting the health of the entire farming ecosystem, from the crops and the surrounding flora and fauna to the nearby waterways and even relationships between farmers themselves. We're all part of this world, the thinking goes, and so we ought to take care of each other as well as our shared home.

Beyond that, though, organic and biodynamic farming results in heartier crops that are less likely to falter during weather fluctuations. As I was told on my tour of Bonterra, "If you're living on synthetic fertilizers, a simple thing can knock you out." In essence, it is through this type of farming that crops—and the people who depend upon them—can survive pests or deficiency or drought. Rather than reacting to calamity, they're already prepared. As was explained to me, "Organic farming offers some terrific climate-resilient buffers, helping vines to better withstand heat spikes in warmer months and erosion during winter storms. Balancing organic farming with awareness and preparedness on the human side is our best approach to ensuring the long-term vitality of [the vineyards] in all conditions."

Organic farming can seem like such a simple good that it's sometimes surprising to think of how many people have an almost knee-jerk resistance to it. In part, this is because the "organic" designation is viewed as being associated with elites and high prices. This is understandable—food and drink are a necessity, and few people want to spend more than they think they can afford on basic staples. And yet, it is also a way of thinking that must be changed, because the people who are most affected by non-organic farming are those who live off polluted waterways; a shift toward organic food as being integral to populism is important as we understand better and better that healthy soil equals healthy people.

And organic wine is a huge part of that. Something that I learned at Bonterra is that harvested grapes are never washed before being made into wine—this goes for organic and non-organic wines. That means that everything on the grapes, including all pesticides and synthetic fertilizers, goes directly into the wine you drink. For someone like me, who would never dream of eating a grape from the supermarket without washing it first, that really gave me pause. Yet, even for people who eat organic food and drink organic milk, organic wine isn't always a top priority. Perhaps this is because alcohol inherently feels like an indulgence, so they don't think it matters if the wine is organically produced? Or perhaps it's because they view organic wine as being as cost prohibitive as other organic products? Perhaps both things! But this is a thought process that needs changing. While organic wine can be more expensive, it is still possible to find it at not too high a cost (most of Bonterra's wine can be found at between $14 to 18 a bottle), and it's a price worth paying when you realize what it is that you'll actually be consuming, i.e. pesticide-free wine.

It's not untrue that I spent my time at Bonterra with evangelicals to the cause of organic farming, and it's also not untrue that with my pre-existing belief in the importance of organic farming and anxieties about climate change, that I was an eager believer. Plus, it was hard not to be converted into this way of thinking by just experiencing the tranquility of the region; there was an enveloping calm even as it was clear that the area was teeming with life. And then also, the wine was just good. The chardonnay wasn't oaky or overly buttery; the merlot rich and round enough to counteract any Sideways snobbery lingering in the back of your mind. It felt very much like this was how life was supposed to be, simple and sweet.

A week after I came home to New York City, I got a text message about the firestorms engulfing Sonoma, Napa, and parts of Mendocino counties: "Isn't this right where you were ??" I watched the news with a sick feeling, saw the images of a glowing red sky, felt disbelief and horror at the scenes of utter devastation, the stories of lives and homes lost forever.

Almost immediately, stories started running about what these catastrophic firestorms would mean for wine country. Many of these stories took a capitalist and callous angle; there was more concern shown for a now-destroyed vintage than for the countless people who had lost jobs, homes, and loved ones. But, of course, the real story of this threat to the wine country community isn't about not getting a good price on a bottle of pinot noir; the real story is about how important a vital wine industry has become to this part of California, how many people from all walks of life rely on these vineyards for their livelihoods. And more than that, these fires demonstrated the imperative we have to take care of the land and treat it with the reverence it deserves.

I sent an email to Bonterra—which was fortunate to have both its team and land out of harm's way and not be directly affected by the firestorms—asking them about the connection, as they see it, between bring organic and biodynamic and dealing with environmental catastrophes. The reply was:

There is much to be learned from natural disasters, but perhaps the most important—and humbling—reminder is that Mother Nature is a powerful force. Listening to and collaborating with nature is at the heart of how we farm at Bonterra. Ultimately, we believe that striving towards partnership with nature through regenerative agriculture is the way forward, as we work to replace what’s lost in soils and surroundings, ultimately enhancing our land rather than depleting it. The more we work hand-in-hand with nature in this way—regenerating the land season by season—the better both Bonterra and our vineyards will be prepared to encounter whatever nature sends our way.

This understanding of how to meet dramatic, life-altering challenges, is an important lesson to take into all parts of our life as we face the possibility that we will have stronger fire seasons, fiercer hurricane systems, and longer dry spells than ever before. It's a lot to think about, and almost impossible to talk about without sounding something like a proselytizer, and yet, more and more, I'm finding it to be the only thing I fully believe in: Mother Earth knows best. And we need to start paying attention. Let's drink to that.