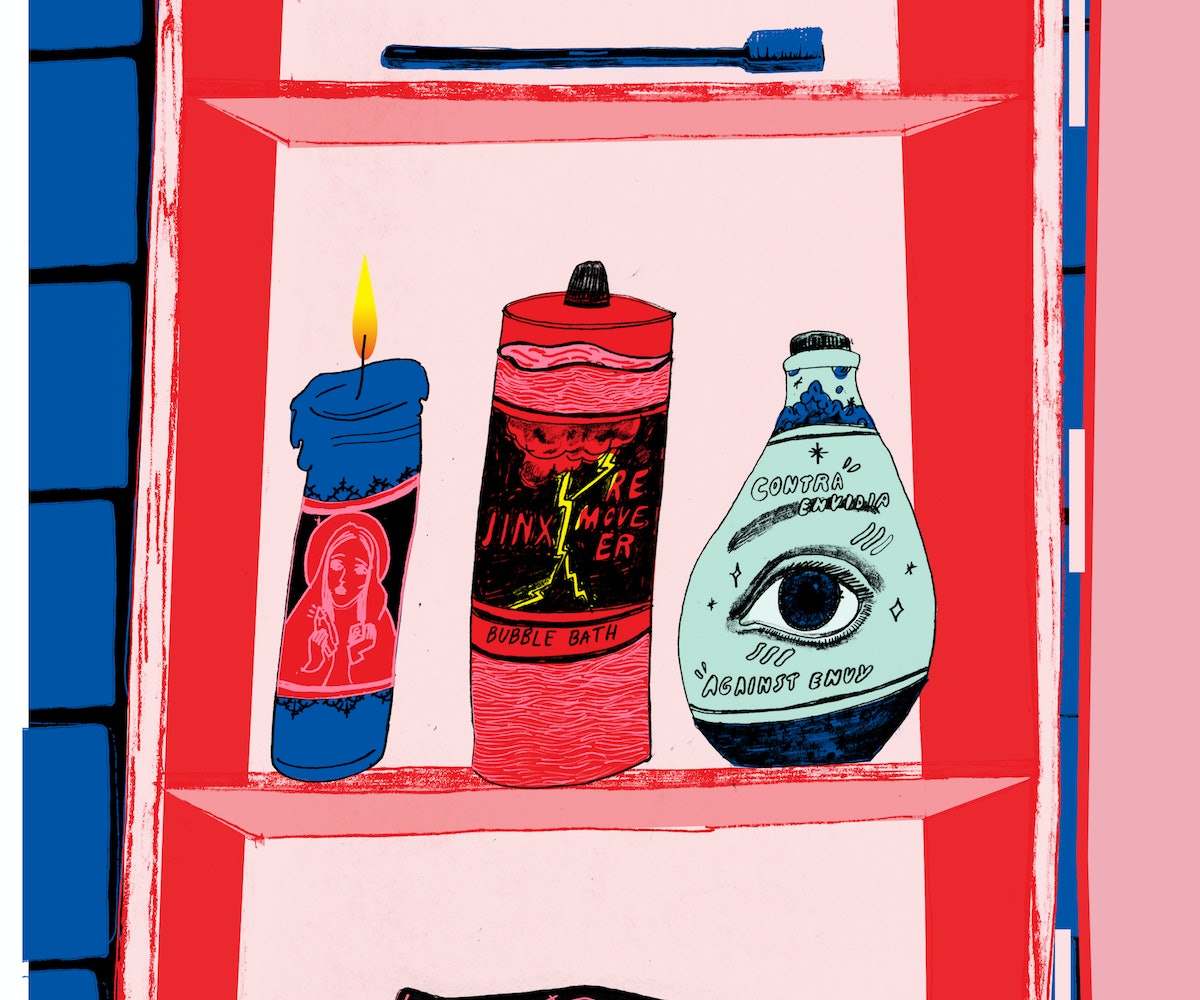 In a dimly lit basement office, the air dense with burning incense, a man named Charlie Olmeda is seated at a large desk littered with spiritual statuettes, preparing to tell me my destiny. Just upstairs, aisles of colorful candles and bath bottles with intriguingly specific labels—“Fast Money Blessing,” “Jinx Removal,” “Love Spell”—fill this Brooklyn corner store dubbed Botanica El Phoenix. From the outside, you might mistake it for your average bodega, but inside it’s packed to the gills with Santeria supplies, amulets, oils, perfumes, Roman Catholic goods, and other products used for religious or magical purposes, often as a form of folk medicine.

The whole experience feels both unusual and oddly familiar. For the uninitiated, botanica shops are largely found in Latino communities, especially Caribbean ones. My traditional Hispanic family on my mother’s side has been in New Mexico for generations, and I spent a large chunk of my childhood growing up in Santa Fe, where you can’t throw a rock without hitting a shaman. Back home, Our Lady of Guadalupe can be spotted not just in churches, but everywhere from the hoods of cars to tattoo parlors, and nearly every longstanding landmark is haunted. So, when Olmeda spreads out his tarot cards, my old-school spiritual family is the first thing he somehow knows to ask about. I can tell things are about to get interesting.

Olmeda comes from a long line of clairvoyants. “My mother and my grandmother, once they open up their mouths, write it down because they are so precise in what they say it’s scary,” he says. His maternal grandmother foresaw his brother’s death during the Vietnam War down to the exact location and time. His paternal grandmother was a healer with such strong abilities that when the police department in San Juan, Puerto Rico, couldn’t solve a murder, they’d take her to the scene of the crime, where she’d hold her hand over it and describe the perpetrator, giving a name and location.

When Olmeda was around 14 years old, he realized he had inherited the gift. “I was freaking out, but I was told that it runs in the family, so accept it—you’re not going crazy,” he says with a chuckle. Growing up in Puerto Rico, there were botanicas everywhere. “It’s the culture,” he says, “but it’s the same principle here. When you find Puerto Ricans, you’re going to find botanicas, the same way if you find a bunch of Italians there’s going to be a pizzeria nearby.” His family opened up their shop in 1973 in Park Slope, and in 2008 it moved to its current Carroll Gardens location.

Word about Olmeda has spread around the world. “I’ve never been to Kazakhstan, but there’s a person there who got really, really ill,” he says. “The doctors could find nothing wrong with her. Her mother had a friend over here. She called up, I told them what to do, and within two days the lady got back on her feet. And that’s how I got customers from Kazakhstan. I have people from practically all over the place.”