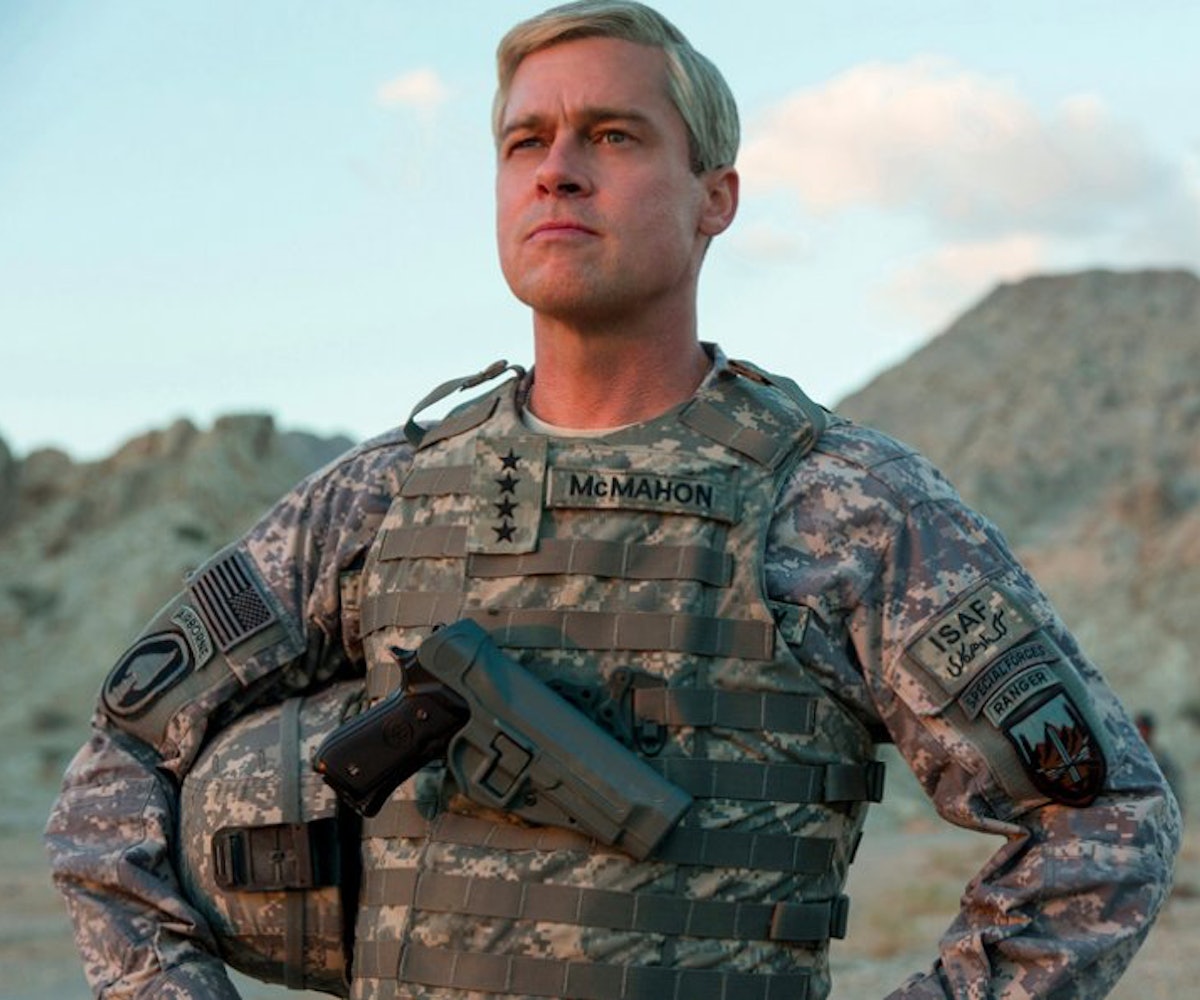 Watching the trailers for War Machine, the new Netflix original movie starring Brad Pitt, two thoughts crossed my mind. The first is that Pitt can’t disappear into a part. No matter how hard he tries, gray hair or no gray hair, it’s impossible not to see him as who he really is: Brad Pitt, the world’s most famous divorcee. The second thought was that, actually, wait, holy shit, it’s Lt. Aldo Raine! And he’s traded in scalping Nazis for getting dressed down by bureaucrats!

That’s because the second Pitt opens his mouth—which he does quite a bit in this unusually talky war movie—you realize he’s doing an almost identical voice, pitched all the way down to gravelly, and using the same twangy drawl, as the one he introduced us to in Quentin Tarantino’s WWII fantasy Inglourious Basterds. It’s distracting and an odd choice, given that the man his character is based on, Gen. Stanley McChrystal, sounds nothing like that.

War Machine is a loose adaptation of journalist Michael Hastings’ book, The Operators: The Wild and Terrifying Inside Story of America's War in Afghanistan, an insider’s account of the messy war and a shocking expose of unprofessional conduct by American troops, which at the time were led by McChrystal. But the David Michod-directed movie functions less as a cinematic expression of hard journalism, and more like a comedic satire of American military might or lack thereof. That tone is dictated by Pitt’s wacky, go-for-broke performance, which comes directly out of the trying-way-too-hard school of acting. Pitt’s character, who is named Gen. Glen McMahon, runs like he’s afraid to bend his limbs, and goes through life with a permanent semi-squint. The corner of his mouth curls upward for no apparent reason other than to convince you that this man is not Brad Pitt. The physical gimmicks are so noticeable that it feels like Brad Pitt is just trying to not be Brad Pitt, instead of trying to be Gen. Glen McMahon.

That Pitt would plagiarize his own performance might make one question his abilities as an actor. Lt. Aldo Raine is a pretty iconic character, so it seems weird that Pitt would want to imitate his character so blatantly rather than create something new. Taken together with his grizzled turn as a tank commander in the 2014 WWII bruiser Fury, and it’s almost like he has a default military setting that he goes to anytime he needs to don some fatigues. I’m not calling Pitt a bad or lazy actor. That would be blasphemy. He has two Oscar nominations—two more than I will ever have—and forgot more about the craft in the last three seconds than I’ll know in my whole life. His filmography is studded with iconic characters and memorable performances. He anchored one of the most devastating finales in movie history. He built a respected career in spite of his good looks, not because of them. People who look like Pitt aren’t supposed to be taken seriously. Just ask Antonio Sabato Jr.

But Pitt has taken efforts throughout his career to counteract his jawline by turning in weirdo performances. His most memorable early performance came as the lovable stoner Floyd in True Romance. (Although those of you who are familiar with Pitt’s history with a certain plant know that’s less of an acting job and more just Brad being Brad.) After Legends of the Fall, Pitt became the de facto sexiest man alive until the still undetermined date of his death, but instead of phoning it in as romantic leads professional world-saves, Pitt zigged when he might have zagged, and made choices like Jeffrey Goines, the twitchy mental patient from 12 Monkeys, a role that scored him his first Oscar nomination. In fact, if you scour Pitt’s filmography, which I usually like to do with my morning coffee, you’ll find it populated with several of these misfits, among all the Trojan warriors and professional hit men we’ve come to expect from our movie stars.

Which is why Gen. McMahon should feel like a natural next step in Pitt’s evolving filmography. It’s as bizarre a performance as he’s ever given, but he still feels woefully miscast. It’s a part that would have been better off in the hands of a great character actor like J.K. Simmons or Gary Oldman. Or maybe we’re just at a point where Pitt is just too famous to play these kinds of parts. An actor’s—and especially a star’s—greatest asset is a sense of mystery. Their ability to become another person depends on the audience separating public persona and fictional character. Pitt has always been extraordinarily famous, but after the glimpse we got into the collapse of his marriage with Angelina Jolie, Pitt’s public persona shifted. He was no longer a blank-slate star onto which we could project characters. In an unlikely and unforeseen turn of events, Pitt suddenly felt like a human being. Which is why watching him play a cartoon character feels so off.