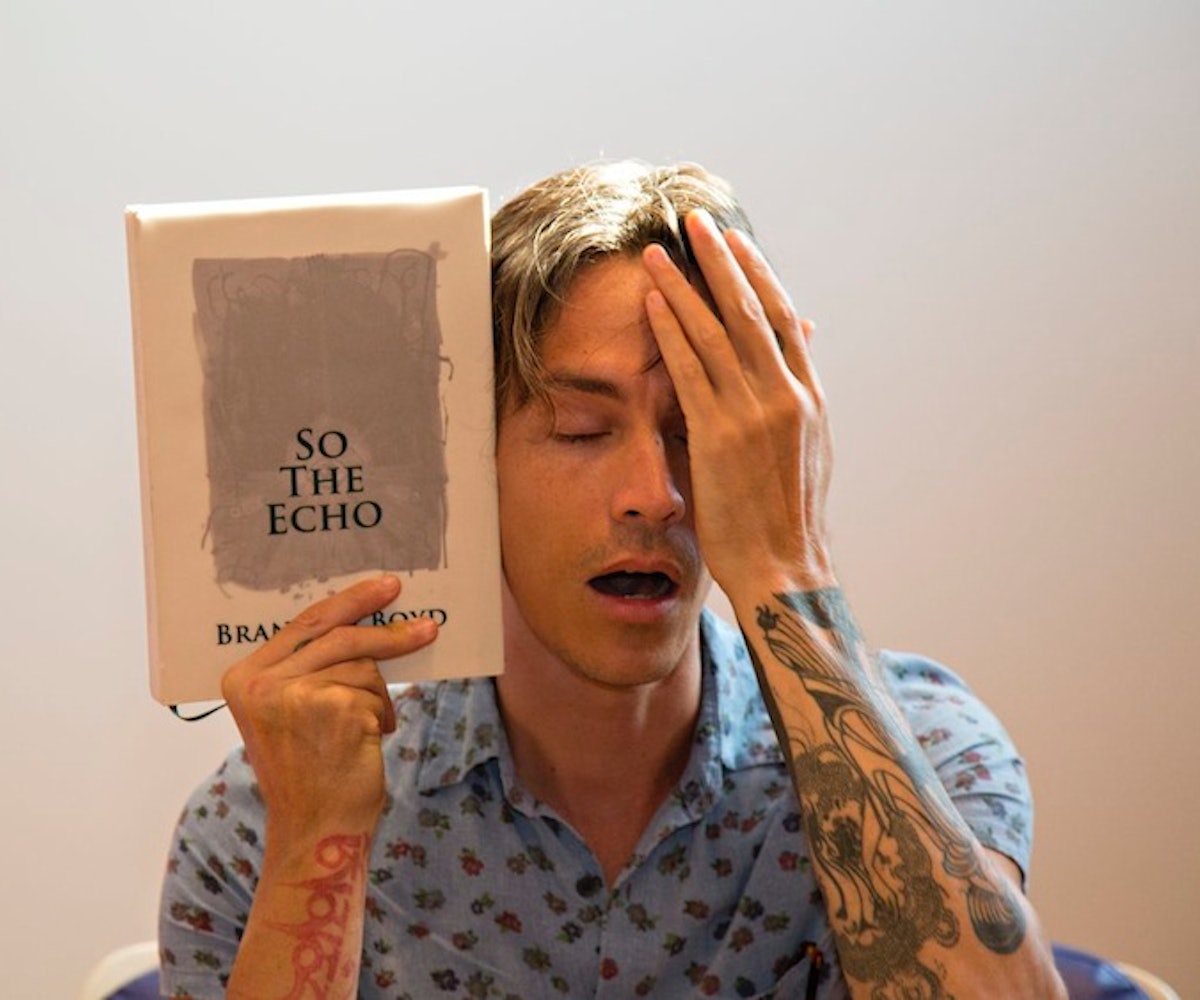 There are creative types, and then there is Brandon Boyd. You and the rest of the world might know him as the frontman of Incubus, but that's only the tip of the iceberg for this musician-slash-artist-slash-author.

With a couple of books to his name already, Boyd has just dropped a third--So The Echo, a gorgeous hardcover that weaves watercolor paintings with line drawings, photographs, and writing, sometimes all together on the same page. The experimental work is the culmination of five years of planning and production, and coincides perfectly with Boyd's new album for his solo project Sons of the Sea. Hey, we told you this guy was in a creative league of his own!

In between book signings in New York, Boyd filled us in on staying sane on the road, how he gets inspired... and the ultimate #rockstarproblem, how he deals with strangers kissing him on the lips.

Even though you're traveling for

you're also doing performances for Sons of the Sea. How do you fit all this in and still sleep?!

It's actually going pretty well. I don't know if I would choose to do a book signing and performances at the same time in the future, though. I'm tired and a little loopy right now.

This book has been in the works for a while. What is your process like?

Doing a book isn't too dissimilar to other creative work I do. I'm doing the work--but it's just going slow and finding the ease to communicate these things. It was sort of like, all of a sudden serveral years have gone by! But I'm really happy with it.

Considering you've published books before, how is this one different?

For the first two books, I had a buddy of mine curate the pieces that I included--but this time I did it myself. I felt a lot clearer about what I wanted the result to be; I was looking for a flowing narrative.  While there are watercolors, I've also embellished them with line drawings, images, and words. My work is sort of like looking in the sky and finding figures in the clouds...at first you don't see anything, but then it takes shape.

Exactly. My favorite game as a little kid! Most of my drawings seem like a mess at first, but then I stare at them long enough and they turn into something.

Tell us about your music project, Sons of The Sea.

This is a collaboration between myself and Brendan O'Brien, who has produced the last three Incubus records. We've been writing songs together, it's been really really fun to do something different.

It must be great, because Incubus fans are so supportive of all of your different projects.

I'm so blessed to have the kind of listeners I do. It's easy to be so fickle in terms of the type of music you listen to--I'm fickle myself!-- but when you're the ones actually putting out the albums, it's a different story and we appreciate the loyalty after all these years.

You must have some pretty wild fan stories...

For the most part, everyone's been pretty cool and respectful of personal space. But every once and a while, someone will randomly kiss you on the lips with tongue and it gets weird [

]. Sometimes you're like, "You're not a bad kisser, OK!" But most of the other times it's a little much. Strangers using tongue...you get the picture.

That's hilarious. How do you stay inspired in all of your different creative outlets?

It's funny, because there's never a dull moment during the process-- and what I'm looking for are dull moments! I've grown to think that inspiration can come in waves, rather than a constant flow of inspiration. It would be inhuman to be beautifully, endlessly inspired every day of the week. I hope to eventually find inspiration in a pile of trash, as well as in a child or in a sunset. The goal is to find beauty and balance in everything.