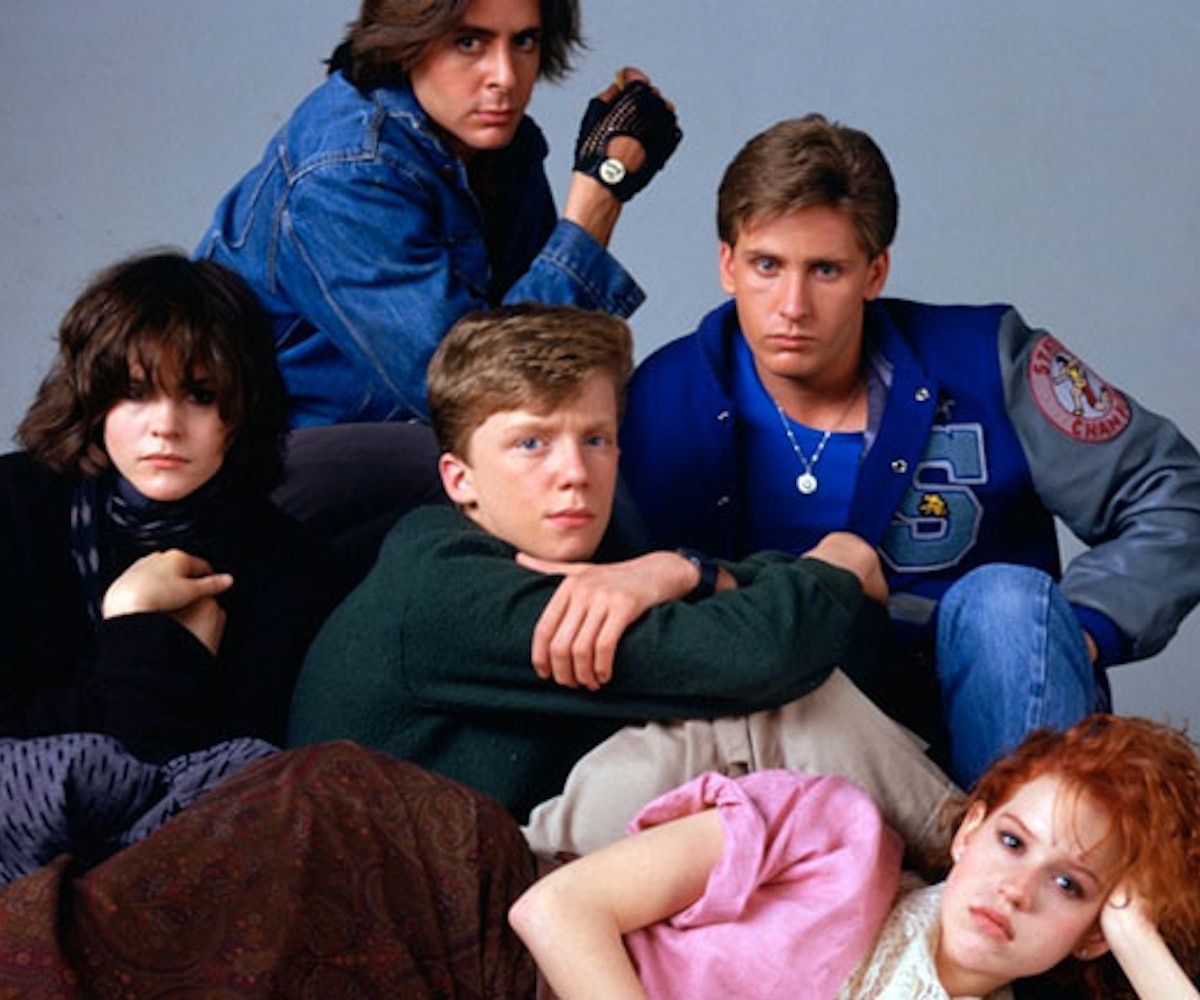 “You see us as you want to see us...in the simplest terms and the most convenient definitions. You see us as a brain, an athlete, a basket case, a princess and a criminal.” This was an American high school in 1985. This was The Breakfast Club.

In 30 years, the general high school atmosphere in the United States has been altered by new technologies that change the way students interact. Social media, cell phones, and any number of apps make getting to know fellow classmates easier than ever. We’re far more connected to one another than we were in 1985—but does that mean that the high school hierarchies and social divisions shown in the iconic John Hughes film are no more?

Tempered by adolescent hormones, daily identity crises, and ever-present teen angst, high school is still a microcosm where students are forced undergo a sort of survival of the fittest. Technology and 21st century developments aside, teenagers still find themselves in situations of distress that lead them to follow whichever path guarantees them the highest likelihood of social survival. “As people become more invisible in a large population, they look for ways to distinguish themselves in order to find other people like them,” says Liam Schmitt, a junior at Geneva High School in Geneva, NY. “This leads to the adoption of stereotypes and cliques made up of like-minded people.” With a solidified group, high schoolers succeed in making themselves less vulnerable—there’s always power in numbers. After all, the same phenomenon occurs in Mr. Vernon’s detention room in The Breakfast Club: Confined to a set population and location, the five students ban together to prevail against the teacher, despite their differences. It’s an evolutionary behavior that hasn’t been lost from the adolescent instinct. Yet in the average American high school, no single detention room encourages students to ban together, resulting in the formation of stereotype-based cliques and groups that define the social atmosphere.

Still, even with the instinct for group formation in tact, high school students today find themselves in a different environment from the one their parents experienced in the ‘80s that has changed the general reputation and appearances of the athlete, brain, princess, basket case, and criminal. For one, the increasing expectation for students to go to prestigious colleges after graduation has altered the perception of one particular prototype: the brain. “The negative connotation is mostly gone and replaced with respect,” says Ana Richards, a junior at Mission Vista High School in Oceanside, CA. “Colleges are very difficult to get into these days and working hard towards school is admirable for everyone.” An rising pressure to obtain an undergraduate degree has made a valedictorian medal as, if not more, inspirational than a championship trophy. “Being smart is actually just as “cool” as being good at sports,” says Jessica Hanks, a senior at the University School of Nashville. While Brian is teased for his do-gooder nature and clean reputation in The Breakfast Club, today he would be cut a little more slack and given some much-deserved credit for his achievements.

Nevertheless, some stereotypes haven’t changed much in 30 years. As the Breakfast Club “princess,” Molly Ringwald seems snobby and out-of-touch to her detention comrades—not unlike the princesses of high schools today, who can most commonly be picked out on social media. In 2015, the princess is far from royalty, as she appears to be what society has defined as the basic bitch. “There is a fair share of prima donnas dispersed throughout the grade. It's easy to find them because they're the ones who post the most selfies on Instagram,” says Rachel Norman, a senior at Eastchester High School. Instead of becoming a vehicle to become more familiar with new people, social media exists largely in high school as a tool to judge others based on their appearances—an action with a harmful result. “The princess might be a popular, preppy person who loves iced coffee and Instagram or something, but that doesn’t mean they’re not brilliant or really passionate about some certain thing,” says Abby Lee, a senior at Wildwood School in Los Angeles. “You can see someone's presence so constantly and think you know them by what they tweet or from pictures of what they're doing on Instagram or Facebook when you've never even met them.” The stereotype is based off of outward perceptions, not inner motives or feelings—just like the 1985 film reveals.

With the exception of minor changes, the other archetypes also hold up. The athlete exists, but his or her presence depends largely on the school. At Eastchester High School, Norman notices that, “the jocks make sure to let the entire school know who they are,” while at Nashville University School, Hanks says that the athlete is “There is less of a perceived social superiority that comes with this label.” The criminal today “could definitely be [a] stoner,” according to Lee, but instead of a rough and tough motorcycle-riding trouble maker, he or she may be “more of the friendly, harmless 4:20 lover.” What’s more, the cool kid reputation that Bender prides himself on in the ‘85 film still holds true today: “The criminal's reputation is no longer frowned upon as much,” says Richards. “In fact, there are some people who want to have this reputation.”

However, the stereotype put out by Hughes that today has the most changing face is the basket case, who can be anyone from “super involved fangirl/guys, the extremely antisocial ones, or the ones who are just downright weird,” according to Norman, to “the people that are kind of a parody of themselves,” according to Lee, to the “twitchy socially unaware people,” according to Richards. As Schmitt concedes, today basket cases are “not really a homogeneous group with any distinguishable common trait, except that they’re weird.” But in the gradual, localized disintegration of this stereotype, a new group has been born: the artists.

Hanks, Lee, and Norman have all observed the rising prominence of artsy cliques, which Lee explains “could be theatre kids or musicians or photographers and painters and filmmakers”—a group that finds its roots in the prototype of both the brain and the basket case, depending on the behaviors and perceptions of the group in a specific setting. While one student body may bully art students and tease them for their interest—much like in Glee or even High School Musical—others may look at artists as the top of the totem pole. These students may be revered for their knowledge of culture, art, music and theater in one environment, but may be mercilessly targeted for their “weird” interests in another.

With exception of this addition of a new stereotype to American high school culture, the five prototypes set in place in The Breakfast Club prove to be relatively unchanged, save for minor details and appearances that arise from 21st century developments. As students may divide themselves into interest-based groups, they agree that stereotyping remains an ever-present act in high school culture. “Although it gets better as you get older, it's still there,” says Norman. The formation of stereotypical clans may be instinctual for adolescents, but that’s not to say that things are as rigid as they once were. With a greater understanding of how stereotypes create harmful and hostile, environments, many students have made an effort to increase the social mobility in their schools. “Everyone is more accepting of each other and more merciful to each others' quirks for the most part,” says Richards.

“What we found out is that each of us is a brain and an athlete and a basket case, a princess, and a criminal.” The Breakfast Club’s iconic closing scene prophecies student attitudes towards the importance of cliques and prototypes today—they clearly exist, but they don’t need to define social roles and relationships in the American high school. Thirty years after the release of the John Hughes film, teenagers find themselves as aware of the fruitlessness of their self-selected groups as Brian, Andrew, Allison, Claire, and Bender do at the end of the 1985 movie. It’s not about who you think you are—it’s how you interact with others around you. American high schools may still be divided into cliques and clubs, stereotypes and sports teams—but each and every student is still a member of the Breakfast Club.

Order your own copy of the special 30th anniversary DVD to celebrate this iconic film.