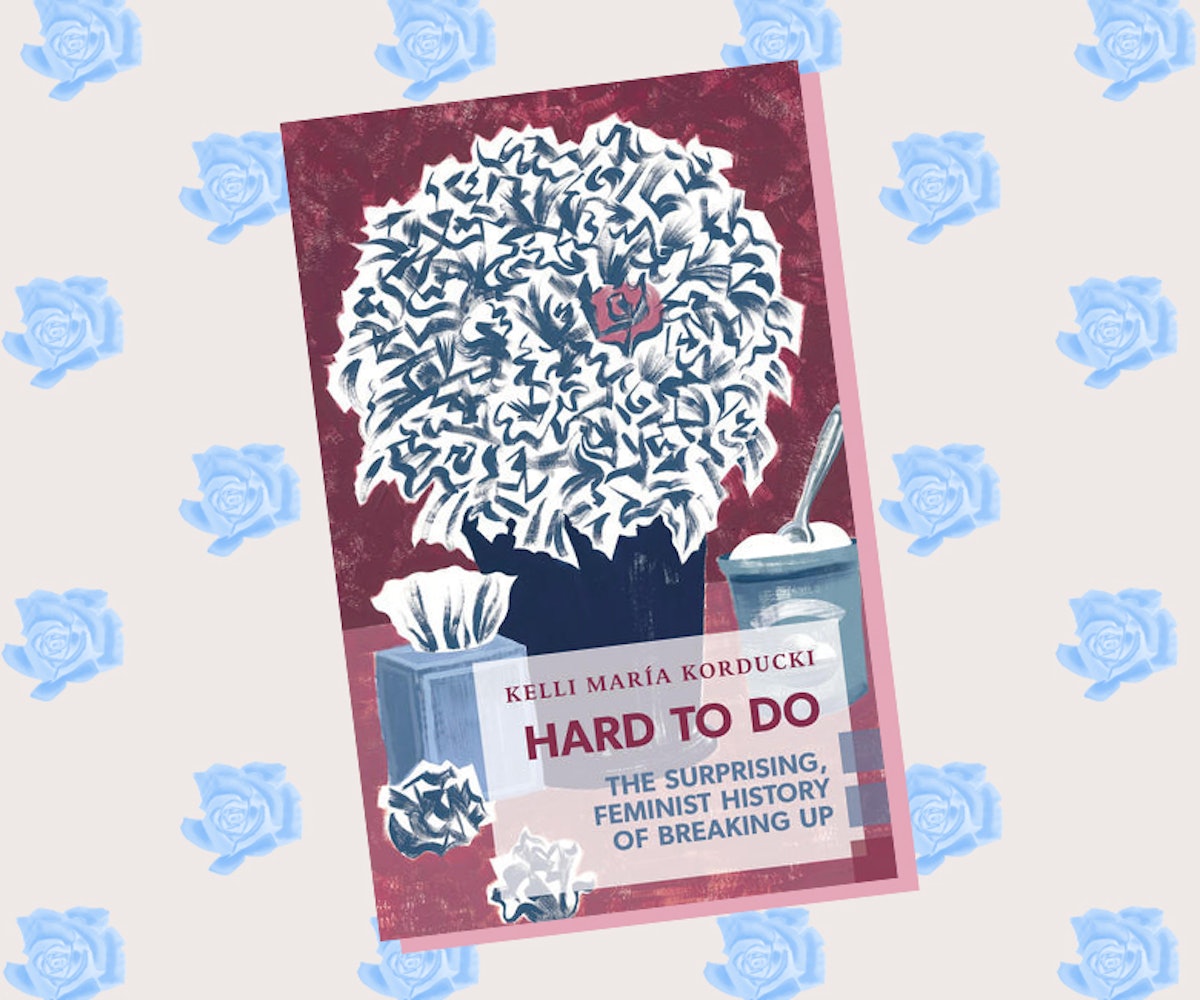 In the aftermath of a particularly difficult breakup following an almost 10-year-long relationship, Kelli Korducki found that her decision to end things was not a popular one. Comments about how "a good man was hard to find" and warnings against leaving someone only because you want to be alone abounded, and Korducki began to second-guess herself; she wondered if her reasons were trivial, and if she was entitled to just want something different.

Once some time had passed, Korducki began examining the feelings of guilt and uncertainty she’d experienced both during the relationship and its demise. She had been taught her whole life to follow her heart, so why had she felt so bad for doing so when her heart took her away from a partner instead of toward one?

This line of questioning led her to the immense task of investigating the history of women’s breakups—a very recent history, as women have not always had the right to leave a relationship. Her new book, Hard to Do: The Surprising Feminist History of Breaking Up, is an impressively articulated account of the illusions and disillusions of historical and modern relationships. Throughout, Korducki maintains her critical eye, pointing to capitalist, patriarchal, heteronormative, and racial oppressions as the main factors making breakups so, well, hard to do. At the same time, her heart remains open to possibility, of a future where breakups are normalized and women are better able to seek out healthy and supportive relationships. I spoke to Korducki via email to tease out some of the findings further.

Hard to Do contains an impressive amount of research into women’s history of breaking up. As you acknowledge throughout the book, it’s impossible to talk about in a “one size fits all” manner. Even confining your scope to the western world, there are immense differences of human experience. How did you set about conducting your research and how did you decide what to include?

I knew that I wanted to begin at the Industrial Revolution, which was when love entered partnership, and I knew that I wanted to look at the moments in between where we’ve collectively determined feminist milestones: the 1920s and the flappers, the women’s lib movement of the 1960s and 1970s, and so on. I didn’t have the time or space to dive into the weeds of feminist theory or the complexities of individual experience in any real detail, so I kept my research focused on demographic trends and material truths, and let the numbers speak for themselves. My hope is that, in doing so, I was able to broadly convey just how differently the so-called milestones of women’s liberation have affected different groups of women on account of things like race, class, and immigration status.

Unlike you, I actively sought out Jane Austen’s novels as an adolescent and was swept up by her fantasies of romantic love, though, as a more practical woman nowadays, find the idea of winning over a Mr. Darcy nauseating. It’s not surprising Austen never married after being forced apart from Tom Lefroy, her “one that got away.” What barrier to finding a fulfilling match does this idea of a “Mr./Mrs. Right” present, do you think?

Relationships are hard work and nobody is just going to magically appear as “the one” who solves any and all romantic conundrums in a person’s life. So, I resent the idea of a “Mr./Mrs. Right,” because it absolves people from the effort required to be good partners. But in Austen’s time as now, we don’t just partner because of warm fuzzy feelings. It’s a pragmatic decision with huge implications for a person’s lifelong material circumstances. What is “right” for one person depends on that person’s priorities and needs, and figuring that out can be challenging, especially as our cultural framing of what “ideal partnership” looks like continues to evolve.

You’ve found that as divorce became increasingly possible, women constituted the majority in seeking to absolve a marriage. This seems in contrast to our modern notion that men are more afraid of long-term commitment... What do you think is the relationship between men previously being less likely to seek divorce and our modern conception of “man as commitment-phobe”?

The relationship is patriarchy, and I’m beginning to think men suffer its greatest fallout. Married men are still less likely to file for divorce than women are, and where women have been shown to flourish after divorcing, men go the other way. The logic goes that this is because men are less likely to be raised to be attentive to their own emotional needs, and less likely to learn to cultivate intimate relationships outside of romantic partnerships; their partners end up becoming their emotional regulators. I wish I could say I didn’t buy into this black-and-white, binary argumentation, but we’ve all seen it to some degree in the real world. You certainly see it with older men, men of our parents’ and grandparents’ generation. You think of how lost these men would be, emotionally and otherwise, without women taking care of them. And they often are; my friend Stephen Thomas wrote an incredible feature about the epidemic of lonely men for Hazlitt last year, and it’s all about this dynamic.

The man-as-commitment-phobe phenomenon could be seen as another side of the same patriarchal privilege-slash-burden—and, if you look at the statistics around aging single men right now, it really is a burden. It stands to reason that a demographic of people who have been brought up to emotionally depend on a (likely female) partner or parent will be either intimidated by the prospect of long-term commitment, given that the stakes are so high, or lack the tools to do the work of being partners.

Alongside your findings on the historical shift from the impossibility of women ending relationships is the assertion that our decisions are forcibly shaped by capitalistic structures. Even as greater numbers of women are able to achieve relative stability on their own, you state it’s still financially preferable to adhere to the couple form. In what ways does economic oppression still hinder our relationship choices, despite legal and social gains for women’s sexual and romantic agency?

When you have two people living together, housing expenses are cut in half. I think most of us have either had a friend who moved in with a partner way too soon for financial reasons, or been that person, ourselves. Couple that with the reality that men are still likelier to earn more than women, even in the same industries, and you have a compelling financial disincentive for many straight women to leave a domestic partnership. Once kids are in the picture, you have a whole new set of challenges, and women bear the brunt of the long-term financial burden for a whole host of reasons both biological and social.

You mention a moment in your own processing period following your breakup, in which your father said, “Life is hard, and harder if you’re alone.” While there’s undeniable truth to his statement, it’s interesting that, societally, we default to the idea that “alone” means “single.” Why do you think this is still the case today?

We still think of society in terms of the nuclear family as its foundation, its default building block. We’re brought up to think of non-romantic friendship as distantly secondary in importance, from partnership to our emotional well-being. And part of that is because we work full-time, or more, and legitimately don’t have the time to invest in multiple relationships. We’re too busy not to put all our interpersonal eggs into the same, small basket.

I remember my mother once saying we wouldn’t even need partners if we could reconfigure the ways in which we conceive of cohabitation, child-rearing, and distribution of labor. Later in your book, you introduce polyamory and other alternative relationship models, which could provide the basis for such a reconfiguration. What vision does your research provide you with for the future of romantic relationships?

I definitely think a more collectivist approach to family formation would solve so many problems, particularly those faced by women and people of marginalized gender identities. Your mom was onto something. How to superimpose that alternative way of being onto the present, while taking into account the cultural and institutional baggage we need to reckon with, is a whole separate question—and one that I think about a lot.

Hard to Do: The Surprising Feminist History of Breaking Up is available for purchase here.